Please don’t throw eggs at me for posting this picture of Cesar Millan, AKA “The Dog Whisperer.” I know some of you have strong feelings about his horribleness as a dog trainer (see under “comments” here) and I want to reassure you that I am not endorsing him in any way as such. In fact, I did rent three Netflix discs worth of his TV show and was only able to watch one and a half episodes of the program, each clocking in at 20 minutes. I found the show strange and disturbing and not entertaining, so I sent the discs back (also giving up on training my dog George Harrison, but that’s another story. George Harrison is great, by the way. Totally not pooping on the carpet and mostly not eating our food since we started keeping it on top of the refrigerator.)

This particular image comes from Sunday’s New York Times. I am posting it because I have a huge marmoset reaction to it every time it enters my field of vision.

The marmoset reaction is a term coined by my mentor, Martha Beck. She uses it to denote the look one has when one does a double-take, as marmosets are famous for doing (when something interests them, they kind of twirl their heads and bug their eyes out). She says we need to pay close attention to these reactions in ourselves because they are pointing us to the truth (or at least to something really cool, something one simply must have like this Irish cable knit sweater which I covet. I’ve wanted one since I was sixteen and my former best friend Leila Corcoran showed up from boarding school one Columbus Day weekend wearing one, but I digress, and I’m not sorry. In fact, I am going to find a picture of it and post it now.) 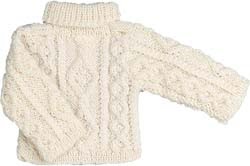 Anyway, as I examined my strong positive reaction to this image of Cesar Millan, I realized what impresses me most is his carriage. I was impressed with his carriage in the Dog Whisperer videos too. He stands with such natural authority, so full-chested, leading with his heart the way my Anusara yoga teachers do. Would you mess with him? I wouldn’t. 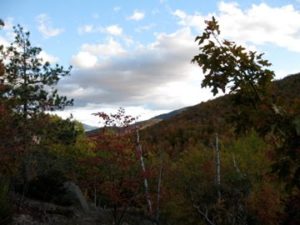 My family spent four blissful days in the mountains of the Adirondacks, a place we spend as much of our free time as possible. I have been coming to a small town in the high peaks since I was a baby (before then, actually, but again: another story) and I find the mountain air, the lack of internet, the birches, the bald peaks refresh me more consistently and predictably than anything else. My whole family loves it there, and part of the fun is the four hour drive during which we listen to my iPod. On Friday’s drive, we found a talk by Martin Seligman on TEDTalks, a wonderful and amazing resource that all should discover. Seligman has been studying the art of happiness for over thirty years, and as such, he tell us that there are three kinds of happiness one may pursue in order to live a “happy” life.

The second is to seek a life that’s about flow: finding work that is absorbing and engaging, or finding a hobby that is like that. Golf, bridge, gun running, doesn’t matter what, as long as you lose track of time when you do it. It’s about not feeling.

The third way to a happy life is through meaning. Seligman writes, “A meaningful life consists of again knowing what your highest strengths and talents are and using them in the service of something that you believe is bigger than you are.” It’s about feeling it all–happiness, sadness, rage and fear–and learning to surf on a wave of equanimity.

As I posted earlier this month, I am reading Daniel Coyle’s The Talent Code, which is all about how deep practice creates skills in the practitioner. Deep practice is when you engage your focus, take action toward a goal (say, playing a scale or throwing a football pass), make mistakes, correct them, and get it right s-l-o-w-l-y. It’s that feeling you have when you really want to achieve something and you’re not quite getting it. As awful as that might feel (to me it feels so awful I often quit before the miracle happens), this is what creates myelin, and myelin is what creates talent. I’ve been trying to apply this to everything I do: parenting, guitar playing, singing, being a wife, friend, coach, writer, housekeeper, lightbulb-changer, etc. There’s something in Cesar Millan’s stance that speaks to this yearning to improve, especially in the realm of present moment living. He is so there. His very presence connotes presence. His story is inspiring too: he only just became legal here after immigrating in the early 90s. With very poor English, he had aspirations to be on television. His employer, Jada Pinkett, who later became his student, told him he was not yet ready for prime time but encouraged him to pursue his dream.

He’s hugely rich now, and I am sure he is able to fulfill all his earthly desires. But what Seligman’s work concludes over and over again is that a life of pleasure does not lead to long term happiness. As we all know, there are diminishing returns to pleasure: one bite of chocolate cake is heavenly, the next OK, but by the end of the slice, we’re not really tasting it anymore. Eat a whole cake and you feel sick and disgusted. It’s the same with anything, even vacation homes and cable knit sweaters (in fact, I’m sick of them already, having spent ten minutes googling them online.)

He’s also engaged in his work. The article in the Times talked about how passionate he is about his dogs, how he and his wife Ilusion have built an empire around his work. But does he live for something greater than himself?

I don’t know. But I like the way he holds his body. And all this gives me the courage that one can indeed unite practice and play, a question I was struggling with a few weeks ago. In fact, it is in finding one’s calling in life–one’s mission, one’s purpose–and pursuing that that all three forms of happiness come together. For if one does what one does best–in Cesar’s case, train people to better live with and love their dogs–one makes the world a better place. And often this leads to wealth, friendships, relationships, and excellent food. Or Irish Fisherman pullovers. But these pleasures that create positive emotions are, as Seligman says, the cherry on top of the sundae. The sundae is the meaning and the flow.

So how does one find one’s calling? Sometimes it’s obvious, as it was for Cesar. He was known as El Perrero (“the dog man”) from the age of seven. For others of us, it’s a process rather like the game of Hot/Cold. In order to play this game properly, of course, we need to know what we are actually feeling, which for some of us is no small trick. Do we like the mountains or the ocean? Or both? Do we prefer working with people on a team or working solo? A little of each? Hotter. Colder. Ice cold. Warmer, warmer, warmer. On fire!!

We also know because if we find something we love, we lose track of time. We would pay someone to let us do it. This is the way I felt today when I got to host my first Writing It Up in the Garden teleclass. As I listened to the nine other amazing writers on the line encouraging each other’s writing, finding the bits that could improve, I felt as deeply satisfied as I can remember feeling. And even before I was on the call, as I read over and listened to the work of the writers and songwriters, I lost track of time. This is also how I feel when I myself am writing, be it songs or prose. It’s how I feel when I am cooking a big meal for a dinner party. The marmoset in me sits up and notices, and it’s as simple as, “All right! Let’s do more of that, please!” 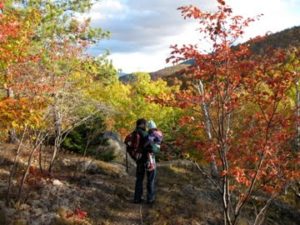 Plus, I finally found the perfect Irish sweater: 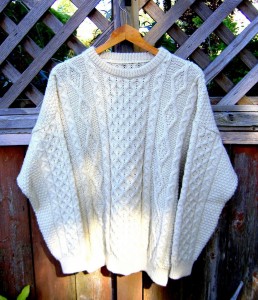 After our gig in Watchung NJ last weekend, Katryna and I spent the night for the last time at our grandmother’s apartment in Manhattan. Readers of this blog will recall…