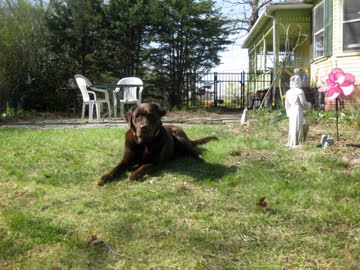 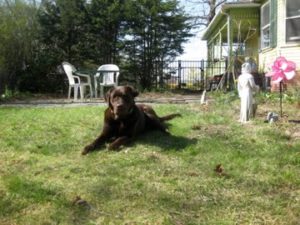 The good news is: George used to eat his poop.

The bad news is: today there was a pile of it on my favorite oriental carpet, the one my grandmother gave me as a wedding gift. 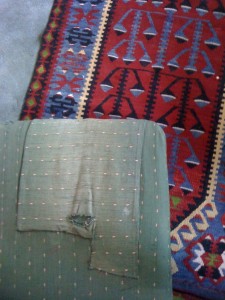 The good news is: camels probably gave birth on that carpet and it seems to be none the worse for the wear.

The bad news is: maybe George has been pooping on the carpet for months now and I only know about it today because the spice Tom’s been putting in his food makes him not like the taste of his poop anymore.

This is not the first time George has proved less than the perfectly behaved $20,000-worth-of-training-therapy dog we inherited last March. He eats anything and everything not locked in or on top of the refrigerator. Last week, while shopping at our co-op with my two kids, I realized that I had left the frozen catfish to thaw on the counter and that Tom’s colleague was dropping George off as I shopped. I thought, “Should I just go ahead and buy more catfish now? Nah. He won’t eat it. It’s frozen.” I came home to a litter of white fish-wrapping paper on the kitchen floor.

Elle went exploring and came running back. “Mama, see what George did on the music room!” she shouted.

There, on that same oriental, was the catfish. Not even eaten, just kind of massaged by George’s gums and left in the 90 degree heat. I was so mad, not because he’d deprived us of our dinner but because HE HADN’T EVEN LIKED IT!! Ingrate.

So I’m trying to find the lesson in George’s annoying behavior. I firmly believe that bad things can lead to good things. To wit: last spring I had such nagging awful back pain that I posted about it here. A wonderful reader suggested I watch Esther Gokhale, so I did. Then I bought her book and began using my hunched shoulders as a bell of mindfulness to get into my body and improve my alignment. This lead me to finally pursue a lifelong dream of taking yoga teacher training. This had lead to massive joy, newly discovered physical strength, a dear new friend in my teacher, spiritual insights, befriending my body in a new and deeper way, and not least, no more pain in my shoulders.

Not bad. All from chronic pain.

So I don’t know what will come of the George situation. Something good, I am sure. I just ordered the Dog Whisperer series on Netflix. And no more than an hour after I woke up, he’d redeemed himself. Elle and Jay and I were cuddling at the bottom of the stairs, along with Elle’s favorite blanket, pillowface and about a thousand of her stuffed animals. After ten minutes of heavenly cuddling, I looked at my watch and said, “Sweetie, I have to go for my run now.”

So we snuggled some more. Then she popped her head up and said, “Oh, I’m going to go cuddle with George Harrison now. You can go, Mama.” And she and Jay both crawled over to the dog, who was lying on his side, and proceeded to climb him like a mountain, rolling all over him, Elle covering him with her blanket. George Harrison lolled his head back and exposed his big silly belly to my children’s hands. He’d definitely earned his keep for the day.

I Wake a Little Off Center

I wakeA little off centerAs if I am only able to inhabit The left side of my body.My skin itchesI am afflicted like JobAnd sleepy like a bearIn late November.Craving…

Sir David Brewster invented it by accidentAn instrument with mirrors at polar endsAngling the glass against the lightKalos, beautifulEodos, shapeScopeo, to look at The Romans cancelled the Greeks’ KappaReplaced it…