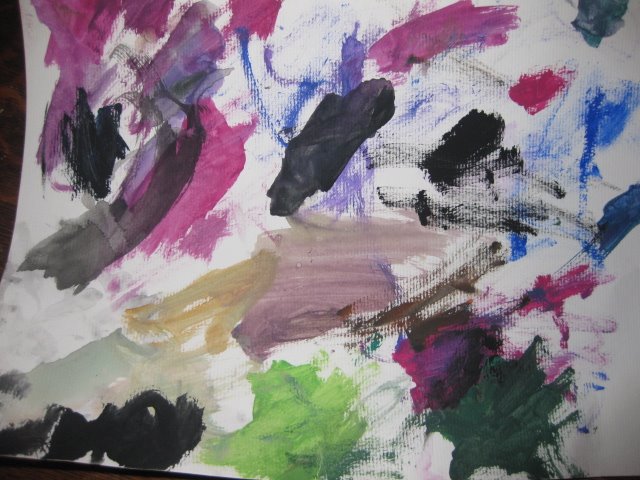 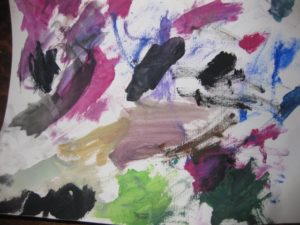 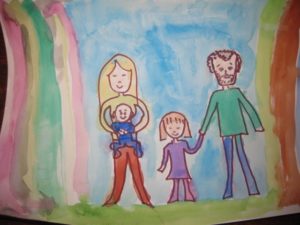 Our experience playing at Infinity Hall was otherworldly. The theater is stunning and we were greeted at the entrance with a coned-off parking spot and a hospitality maven named Madeline who shadowed us wherever we went, asking if there was anything at all we needed. The sound was exquisite, which for me makes or breaks a show. Katryna was fabulous, and I was wobbly but fine (I think). Kudos to Fred the amazing sound engineer.

On the drive home, we listened to this great podcast with Dan Zanes podcast. In it, he suggests the ukulele as the first instrument a family member might pick up and try to learn. It’s easy on little hands. We have such a uke, and so Saturday morning I looked up some chords on the internet and tuned up Lila’s little ukulele and played a few three chord songs: “The Fox,” “By and By,” and “Pelican Fish,” the current house favorite. Later, Lila and I did some water colors (see above). I found myself scandalized by the fact that she couldn’t seem to keep from messing up the paints. I had to keep reminding myself that she’s two. Ooops. This is called Narcissistic Mother/Daughter Confusion Syndrome, and I have it in spades. In the middle of yelling at her for leaning over and painting a big black smudge on MY pretty watercolor of our family (how symbolic is THAT?), I heard that voice in my head say, “She’s your daughter, not your sister.”

“Sorry,” I said. She hit me with her paintbrush. “Don’t hit me. But I’m sorry I got mad. Painting is supposed to be messy, and you’re doing a great job. But today we are each going to paint on our own paper. But another day we can each paint on each others’ paper.”

Saturday night we hosted a dinner for members of our church. This had been my idea last fall when I was even more deranged from lack of sleep and the shock of going from one child to two than I am now. I had suggested that during the Lenten season members of our church host what the church of my childhood called Agape Meals: potlucks where members came to cheer each other up from the doldrums of late winter and maybe discuss a Bible passage, but mostly eat and chat and let the kids scramble underfoot and try to eat chocolate (which was my predominant memory of the event). Everyone at my current church thought this was a good idea, so here we were, at 4pm on Saturday with guests (10 of them) scheduled to arrive in an hour and a half. I had just woken up from a nap, and Tom had just returned from the co-op with Lila in the bike trailer and all the groceries he could fit around her. I had just noticed that the fish I had been planning on serving was a mere pound and a half to feed 12 adults. Whoops. I grabbed some fresh chicken breasts and marinated them in a separate dish from the fish while holding Lila on my hip. She was not in the mood to do anything but be held, and the problem was neither was Johnny. And I only had two hips and two hands. Tom meanwhile was putting groceries away and trying to clean our wreck of a house. (We’d cleaned that morning, but the tsunami had made its usual entrance sometime between lunch and that moment.)

“I want yogurt and honey, Mama,” Lila stated. Great! I thought. A chance to feed her some desperately needed protein. I handed Johnny to Tom and ladled out some yogurt. Johnny started making car alarm sounds and leaning his body out of Tom’s arms in my general direction. Lila started bouncing up and down on my left hip. I squeezed some honey onto her yogurt.

“Don’t stir it, Mama!” Lila shouted, so I left it in a neat thin ribbon and put her down at the table to eat it. I took Johnny from Tom and Tom went back to cleaning up. I nursed Johnny, and in what seemed like ten seconds, Lila said, “I’m all done. Now can I watch a video?”

I looked at her bowl which appeared to have as much in it as it had when I filled it. “Have some more yogurt, sweetie,” I said, thinking this might be all we’d manage for dinner tonight, given how chaotic it promised to be.

“Well, what if I put a little more honey in? Would you eat that?”

“Yes, thank you,” she said, nodding her head so politely. Having a verbal toddler must be something like living with Joan Crawford. With Johnny on my hip, I squeezed in a little more honey and took the spoon to stir it in–this time I figured I’d get all the yogurt nice and sweet so she’d actually eat it.

“NOOOOOOOOOOO!” She wailed and burst into tears, throwing her head back and threatening to throw the bowl on the floor. “I. Don’t. Want. That. I. Just. Want. Honey! I don’t want the yogurt wif the honey mixed in! That’s YOURS, Mama, NOT MINE!”

For a moment, I was so stunned at her uncanny ability to articulate my own peculiar food values (read; neuroses) that I was speechless. And here I was, once again caught between all the voices in my head:

Voice 1: “She needs protein! All she eats is sugar and carbs! Make sure she has protein!”
Voice 2: “What is the big deal? Let it go. Feed her what she wants. She’s going to get enough nutrition at some point. There’s protein in everything.”
Voice 3: “Don’t let her tantrum! Give her a time out!”
Voice 4: “You are setting her up for an eating disorder later in life. AND IT WILL BE ALL YOUR FAULT!”
Voice 5: “Breathe and hug her.”

I did what Voice 5 suggested, and a little of what Voice 3 suggested and then let her watch Big Bird and went back to the kitchen to make myself a cup of tea and cry with Tom.

“Why do we always do this to ourselves?” I sobbed. “It’s Saturday. I don’t have a gig, but we’ve managed to completely stress ourselves out once again. Why is it that at the end of every single weekend I feel like I need a weekend to recover?”

“I know,” he said. “We keep saying we’ll do less and then we say yes to something and end up here again.”

Albert Einstein says the definition of insanity is doing the same thing over and over again and expecting different results. In twelve step groups this is also called “addiction.” I really thought we were getting better.

And he was right. As soon as the guests arrived, my heart felt like it was pushing out of its cage, I was so glad to see the individuals. We had a fabulous meal (and there was extra chicken left over) and an even better conversation, even with the kids scrambling around and refusing to go to bed and trying to eat more chocolate than they were allowed.

Running Shoes and Other Thoughts

It’s 4:10 on Tuesday March 3 and I’m up in my office on the third floor of our house. It overlooks the parking lot of the hospital across the street,…