Sermon: “Back at the Fruit Tree,” with Scripture by Louise Glück 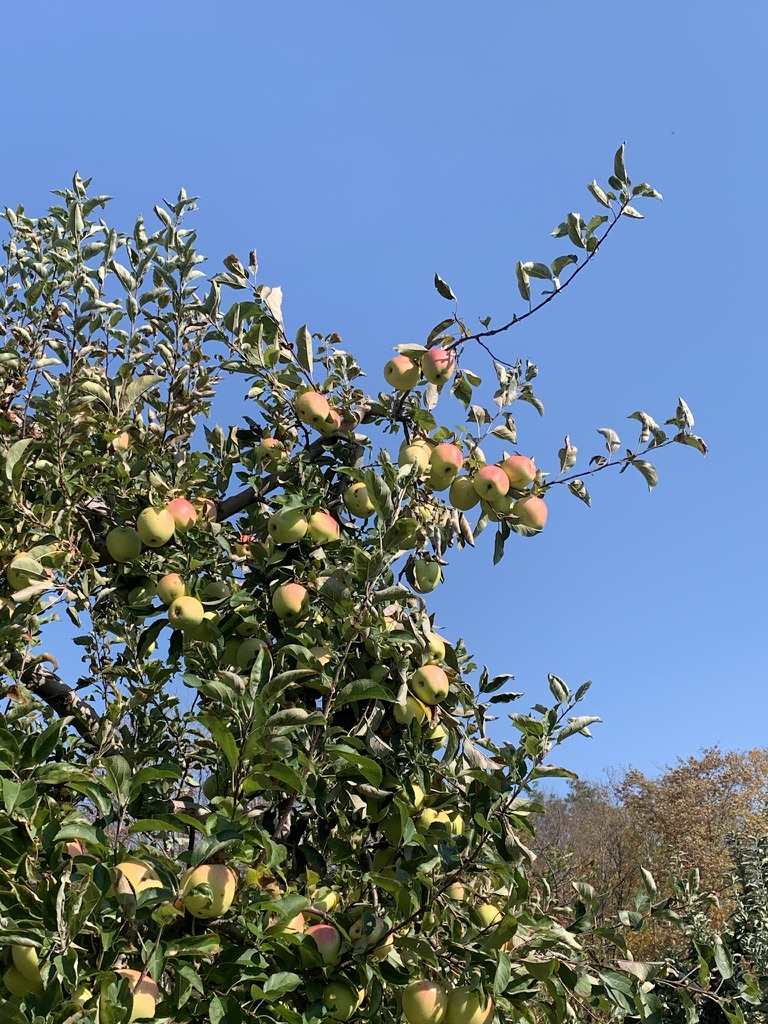 A Myth of Devotion

When Hades decided he loved this girl
he built for her a duplicate of earth,
everything the same, down to the meadow,
but with a bed added.

Everything the same, including sunlight,
because it would be hard on a young girl
to go so quickly from bright light to utter darkness

Gradually, he thought, he’d introduce the night,
first as the shadows of fluttering leaves.
Then moon, then stars. Then no moon, no stars.
Let Persephone get used to it slowly.
In the end, he thought, she’d find it comforting.

A replica of earth
except there was love here.
Doesn’t everyone want love?

He waited many years,
building a world, watching
Persephone in the meadow.
Persephone, a smeller, a taster.
If you have one appetite, he thought,
you have them all.

Doesn’t everyone want to feel in the night
the beloved body, compass, polestar,
to hear the quiet breathing that says
I am alive, that means also
you are alive, because you hear me,
you are here with me. And when one turns,
the other turns—

That’s what he felt, the lord of darkness,
looking at the world he had
constructed for Persephone. It never crossed his mind
that there’d be no more smelling here,
certainly no more eating.

Guilt? Terror? The fear of love?
These things he couldn’t imagine;
no lover ever imagines them.

He dreams, he wonders what to call this place.
First he thinks: The New Hell. Then: The Garden.
In the end, he decides to name it
Persephone’s Girlhood.

A soft light rising above the level meadow,
behind the bed. He takes her in his arms.
He wants to say I love you, nothing can hurt you

but he thinks
this is a lie, so he says in the end
you’re dead, nothing can hurt you
which seems to him
a more promising beginning, more true.

Forgive my dark meditation, and the poem from Hades when the sun is not even yet in Scorpio––ruled by Pluto, the God of the Underworld himself. From now until October 22, we are still in wise, balanced Libra. But maybe we need to think about the darkness while our eyes are clear and the leaves are still with us, glorious and radiant, before our descent into November. Still, trigger warnings apply. Perhaps you didn’t sign up to hear a sermon on evil today. If so, no hard feelings! Enjoy the music. (Though I promise a happy-ish ending.)

Like a lot of liberal Christians, I grew up with a healthy skepticism about evil. I see it in institutions, not in individuals. Those a previous generation or a different culture would call “sinful” I see as “sick.” It’s the institutions of Empire, war, slavery, capitalism, pharmaceutical hegemony, rape of the planet, Social media giants, corporations of all kinds, along with the societal delusions of patriarchy, racism, classism, the cult of youth and beauty, the hierarchies of academic achievement and correctness, of neurotypical-ism, homophobia, transphobia— as well as all those Group Think projects that ensnare us. That is evil.

This week, my daughter showed me a clip from The Daily Show. It’s an ongoing story line where reporter Jason Klepper goes to Trump rallies, kind of pretending to be one of them. He interviews individuals, asking them questions meant to baffle and rethink. In the one Lila showed me––a Harrisburg PA rally––a maskless guy points to the crowd of equally maskless followers, and says, “This is America right there. That’s freedom!”

Klapper then asks him if he’s pro-life.

“So, it’s important for Americans to do whatever they can to protect a human life.”

“Then why aren’t you wearing a mask?”

The look on his face as he reflects on this is so interesting. He’s stopped for a second. He’s sweet, really, this young man. He’s somebody’s son. A big pink face, bushy brown beard, red MAGA hat. He stutters as he tries to think his way through this.

Finally, he says: “I mean…again…it’s a…personal choice, I think? If everyone here were wearing a mask and said, everybody put a mask on, I’d respect everyone’s wishes and put it on.” He shrugs now, convinced by his own argument. And finishes, confoundingly, with, “We’re people, not sheeple.”

Klapper says, “You’re not sheeple. So you’re going to look at what everybody’s doing and follow along.”

“That’s right.” He grins, relieved that they understand each other, then marches off with a group of others into the stadium where a president who will soon announce he is positive for COVID is about to speak, spewing complete fabrications about Hillary’s emails and fake news conspiracies along with virus droplets.

So what is this? I am hard pressed to call this deluded guy “evil.” I am not totally sure he’s even “sick.” He is just a guy who wants to be loved. His people don’t question Trump, so neither does he. Doesn’t everyone want love? Louise Glück’s Hades asks. But watching the gestalt of the president’s rally—the Rambo flags with his face on Sylvester Stallone’s body, the literal selling of lies (there are stalls everywhere hocking all sorts of MAGA schwag)—I do see evil. I see that same gritty cloud of corporate and societal evil here that I see in reels of Third Reich marches and Ku Klux Klan circles.

I have to tread carefully, here. In engaging in this toxic stew, in watching these horrible rallies, am I infecting myself with evil? I’m certainly more likely to feel hatred watching these clips than I normally do, flicking through my progressive friends’ hopeful exhortations on Facebook. I moved to Western Massachusetts to escape from all those people I disagreed with and who made me so angry. Who wants to feel angry? Who wants to engage with evil?

As CS Lewis says, “The triumph of evil depends entirely on disguise.” So what evil do I worship, hidden by a disguise? How am I trumpeting my freedom and humanity and righteousness while really just going along with my agreeable crowd? Am I deluding myself? Of course I am. As a white, cis-gendered hetero upper-middle class American with a college degree, I am smack in the middle of Empire, benefiting from my ancestors’ successful capitalist past, not to mention my country’s theft of the land I live on and its exploiting of stolen African labor. Every time I shop at Amazon, I’m complicit, etc, etc; and so out comes the hairshirt, and out comes the big plan for self-improvement, the vegetarian recipe books, the eschewing of plane travel. This is all good and fine, insofar as it rids me of my illusions that I might be better than “those people” at the Harrisburg rally. But as Richard Rohr, my favorite Franciscan, writes, “The world is filled with contradictions, false alternatives, zero-sum games, paradoxes, and unresolvable evils. It is foundationally unjust, yet we must work for justice in order to find our own freedom and create it for others.”

The scriptures back up the idea that Jesus was way more focused on institutional evil than on individual “sin.” The first “demon” Jesus calls out and excises was not in a bar or a brothel but in a synagogue (Mark 1:23-28). Jesus never condemned individuals—he always healed and forgave. He famously sat at table with tax collectors and sinners. It was the institutions he condemned. While Jesus healed the demons of individuals, he argued with the scribes and the Pharisees, he called out the truth and the lies, and he overthrew tables in the Temple, knowing, if he did this, he would likely be executed. But he always preached peace, even on the cross: Father, forgive them. They don’t know what they are doing. He both argued with and accepted the world as it was, and in staying present with it, even on the cross, he transformed his own execution into a lesson of forgiveness and love.

The world is absurd. We are all foolish beings, bumping into each other, even when we have wonderfully beneficial intentions. The world is full of catastrophes and calamities. Someone very dear to me is dying, and his wife, equally dear, doesn’t know who she is anymore; doesn’t know her time with him is limited. These people lived exemplary lives. I am sure each of you could list hundreds of “cases” like this. The good die young. Children turn away from loving parents. Truly good and enlightened people came from horrific abuse. How is this just and right?

I don’t know. I can’t know, because the part of me that tries to figure stuff out is doomed to be deluded, no matter its best efforts. But I feel the answer. I feel God’s presence insinuate itself into the pain, like water filling in all the cracks. As my friend Steve Philbrick says, water finds the lowest places. When I soften and open; when I stop racing around and just sit with the pain and breathe, I see both my complicity and my desire to do justice, love mercy and walk humbly with my God. I want to tell that deluded young MAGA kid about how beautiful the non-MAGA world is and offer him a seat at the Welcome Table. and I also want to offer him a mask. I can’t–– we can’t––eliminate evil, nor can we squirrel ourselves away into Happy Valleys of blissful ignorance.

We can hold it, though. We can take it. We are strong like that, and when we are weak, God is strong in us. In our own suffering from the evils of the world, in the sharing in the sufferings, we grow in compassion and love, and we feel God’s infinite, creative, playful, healing love. We discover it’s an endless well.

When I started this blog in 2004, my impetus was the immanence of Katryna’s maternity leave and the resulting fact that I was losing my platform. I needed a way…

My Yes Vote For Hillsy

My friend Pam Houston asks the question: who will you dedicate your No Drumpf vote to. She dedicates hers to “my four year-old self, smiling bravely for the camera in her 3/4…

Maybe God Is A Harried Parent

Maybe God is a harried parent just like, say, me.We say, “God used to do great things, Like create the world And set it in motionBut now He’s this lame…