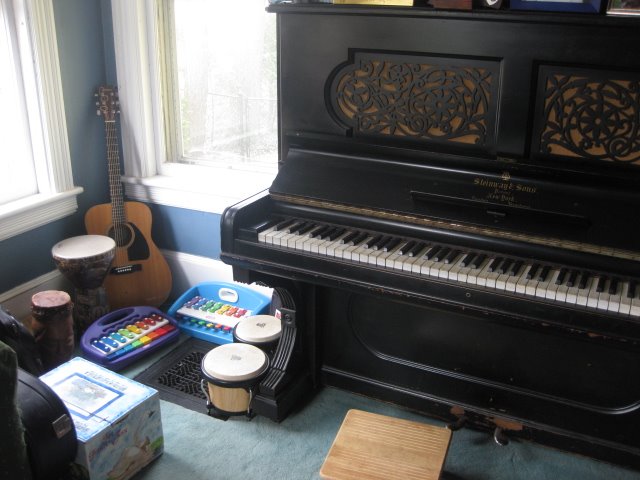 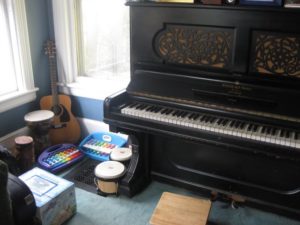 One of my favorite mother/writer friends sent me this link. It’s to a new independent film called Who Does She Think She Is? and it’s about artists who are mothers/mothers who are artists. I can’t wait to see the whole film! Watch the preview here.

Johnny has a fever today. His nose is running, and he hates it when I wipe his upper lip clean for him, twisting his head back and forth and shouting in protest. He was so sick today that when he was awake, all he wanted to do was put his head on my shoulder and doze. I have to say, it was really sweet, and I was more than glad to just sit on the couch with a weighty baby on my chest.

Today was one of those days where I planned a million things to do (write a song with Lila! Make Easter eggs! Draw! Buy mallets for her drums! Buy her big girl underpants (yes, folks, I think we’re there!) Go to the library! Oh, um, figure out my tax deductions) and felt like I did almost none of them. I did finish Tom’s scarf, though. This is the diamond scarf I promised to make him after he gave me a diamond ring when we got engaged. In 2004. Tomorrow is his birthday, and I figure better late than never, and maybe giving him a heavy wool scarf in early April will guarantee future spring weather, the way carrying an umbrella with you keeps it from raining. 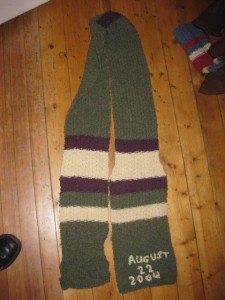 The Easter eggs were not nearly as wacko-great as I’d wanted, but here they are for your amusement. I sort of overdid it with the dye, leaving them in for several hours. Like I said before, I’m a fearful type, so everything has to be REALLY INTENSE! 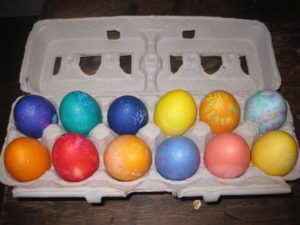 Katryna suggested that I color with crayons before dipping: 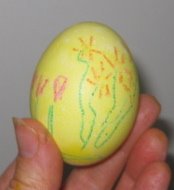 I’d promised Lila a trip to the library which got postponed this morning after I realized Johnny was running a temp. So when the babysitter came at 3, I left my pile of bank statements up in the attic office and grabbed my girl. We managed to get her hair cut and a quick trip to the supermarket for pastel M&Ms (potty bribery) and one of those ear thermometers for Johnny. The one I got cost $25 and measured both my and Johnny’s temperature at 94.3. Grrrr.

But the library visit was great, albeit sad because one of the big fish had “passed on,” according to a six year old boy standing next to the tank when we ventured over. The other big fish, Paco, is alive and well, but still only hanging out in his corner of the aquarium. I’d asked my Facebook friends to recommend some good kids’ books last week, so armed with my gigantic list, I got three for starters: “Toot and Puddle” by Holly Hobbie, “Fancy Nancy and the Posh Puppy,” and Kevin Henkes’ “Julius Baby of the World.” She’s gotten obsessed recently with “One Morning In Maine,” “Blueberries for Sal” and “Make Way for Ducklings,” which thrills me to no end, but today she refused to try “Lentil.”

We did set up a music space in our music room. The whole room, of course, is dedicated to music; it’s where the piano is; it’s where I tend to play the guitar (though I actually play guitar all over the house); it’s where the stereo and CDs are. But this area is for kids: 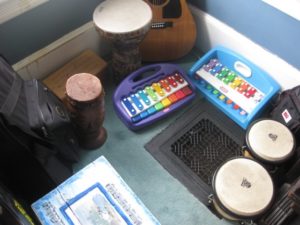 And yesterday, we made a shaker out of a tube of toilet paper and tin foil. 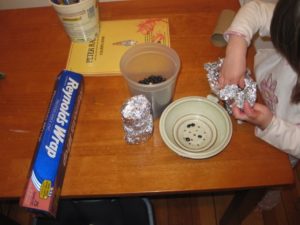 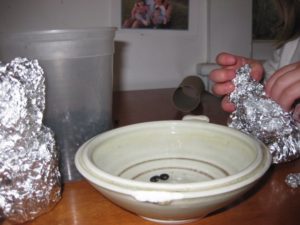 It didn’t last long. Lila is fascinated by the black beans that we put into the tubes to make the shaky sound, so as soon as my back was turned, she ripped off the tin foil to get at them. Then they fell on the floor, and I scrambled around trying to clean them up so that Johnny wouldn’t put them in his mouth. Still, it made a very satisfying shaky sound. Experiment with other grains and amounts to see what you like best.

House of Bourbon (Notes for “Tomorrowland”)

House of Bourbon(“Found” poem from about 1998; revised 2010.) What if I don’t want to be a princess?My precious face. My beautiful face. It’s not all I have.Alternatively, you might…

And This Should Be Done While Taking A Vigorous Walk

Thanksgiving was full of thanks and full of giving. In my cynical past, I sometimes thought of Thanksgiving as a cruel prelude to The Festival Of Anxiety Where You Spend…