“The deeper that sorrow carves into your being, the more joy you can contain.”-Khalil Gibran 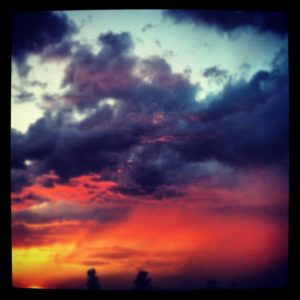 Last week, the phrase “crawling out of one’s skin” came to mind a lot. I found myself short-tempered with the kids, constantly on the verge of tears, and generally feeling as though I were separated from the rest of the world by bandages of gauze. My kids were up to their usual combination of cuteness and exasperating behavior, and I had that same sense I had during their babyhood and my sleep deprivation: knowing that they were amazing, but not feeling it, as I usually do. I’d try to connect with nature and it would all seem theoretical, not transporting. The old thoughts came: “It’s always like this. It’s never going to change. It’s all downhill from here. You are doomed. And also it’s all your fault.”

I called my therapist who suggested I listen to a relaxation CD and possibly take Ativan. The relaxation CD sounded about as helpful as summoning fairies to sprinkle confetti on my head; the Ativan was much more promising, but there’s the minor issue that it might be addictive to some, and I knew full well that if it did work, I’d want to be on that magic carpet for the rest of my life.

I didn’t want to tell anyone I was feeling so blue, because if I did then the jig would be up, and everyone would finally know that I don’t actually have all the answers. So I suffered for a few more hours, and then I told a friend. We were sitting at the Y waiting for our kids to finish their gymnastics class and as I told her how I felt, the tears came. And with the tears, everything I have been tamping down since Christmas. Newtown. Mothers with kids who might be homicidal. The huge tear in the veneer of our small town existence, exposing the violence that so many others live with on a daily basis. The unfairness of it all. The shame of privilege; the searing cold of poverty. All kinds of poverty.

“It sounds like you are going through some grief,” said my friend. I nodded. I cried some more. I went home and made some more calls. “Talk about it,” said another friend. “That’s what we do. We talk our way through this stuff.”

Shared sorrow is half a sorrow, goes the saying. So I trod forward a bit, letting my husband know how sad I was, telling some more friends. I felt their concern like warm hands on my shoulders even when I was alone. And I downloaded the stupid relaxation CD and listened to it every day twice a day. On another friend’s suggestion, I also downloaded Bach’s Unaccompanied Suites in C minor for cello by Yo Yo Ma. And on Thursday night I started to write a song. On Saturday, I drove by myself up to West Cummington for our show. The sunset was my accompaniment, and as I followed the pinks, greys, far-off fires in the sky, I felt in wordless dialogue with those heavy hands on my shoulders. I felt profound joy and gratitude. I felt the gauze unwrap, and when we stepped on stage (metaphorically speaking–there actually is no stage) in front of our audience, I was myself again.

Stephen preached that Sunday about Martin Luther King Jr, and used the story in Exodus about Moses getting his call. The burning bush tells Moses to go way down to Egypt land to “let my people go.” But, Moses protests, “Why me? I am a guy with a stutter! Who is going to listen to me? They have no idea who I am! I’m this adopted kid from the aristocracy. And anyway, who should I tell them sent me?”

And God, in the form of the burning bush, says, “Tell them ‘I will be what I will be’ has sent you.”

Telling my therapist about how I recovered myself (and grudgingly thanking him for the relaxation CD), I said, “But this might not work every time. I mean it’s not like every day I get a great idea for a song. It’s not every day that we get to play an amazing show.”

He smirked at me. He raised an eyebrow. (This is how we speak to each other.)

“Right,”I nodded. “Manna from heaven.” Those who had been slaves coming out of bondage followed Moses through the desert for forty years. Every day they were given exactly what they needed: no more, no less. If they tried to hoard extra manna it turned to mold and rot. “I am a songwriter. I have that inside me. I am a performer. That’s me. It’s always there.”

The other half of that aphorism is “Shared joy is doubled joy.” I’ve been following author and researcher Brené Brown since 2009, and in a recent interview for Spirituality & Health Magazine, she writes:

“…Joy is probably the most difficult emotion to feel. It’s hard to feel joy because we are so keenly aware that it’s fleeing. When we lose our tolerance for vulnerability, we lose the courage to be joyful. Joy is a daring emotion! We are going to let ourselves stop in a moment that won’t last forever, that can be taken away. we fell almost that ‘you are a schmuck if you let yourself feel too deeply because the bad stuff is going to happen.’…’If I let myself feel this joy, pain will be all that much harder. If I let myself just really sink into the joy of my child, something is going to happen to him or her, and I will be devastated.’ It comes back to the idea that it’s easier to live disappointed than feel disappointed. And yet we are starving for joy. I have never met anyone who doesn’t want more joy in their life.”

The burning bush was a miracle: a burning bush that did not consume itself. But as Stephen pointed out, it was also a miracle that Moses even noticed it. Lots of people–I for example–would have been moving so fast that we would not have stopped to notice that the fire never won.

On Monday, I sat my kids and visiting nephew down in front of the TV and together we watched Barack Obama speak to the nation in bold terms, sketching out a future that involved the efforts of all of us. “We the people,” he invoked. Not far from the spot where Dr. King had famously unveiled his own dream fifty years ago. The coupling of Dr. King’s celebration and the inauguration of our first black president is so shimmering with joy that it dazzles me at times, and I can hardly take it in. But following the sunset on Saturday evening had given me some practice, so I just let myself feel the amazement, the sweetness of witnessing this historic event with my kids cuddled next to me on the couch. They have never known anything but an African American president.

As Obama left the scene on Monday, he stopped to turn around and look at the crowd. “I want to take a look one more time,” he was heard to say. “I’m not going to see this again.”

We more than talk about our grief. We use it. It’s our raw clay. And we couldn’t feel compassion for others let alone serve others if we didn’t touch it now and then. For an artist, we couldn’t do our work without all those technicolor feelings. It’s a high price. And I’ll pay it. Getting to commune with that sunset the other night was worth the cost of any ticket.