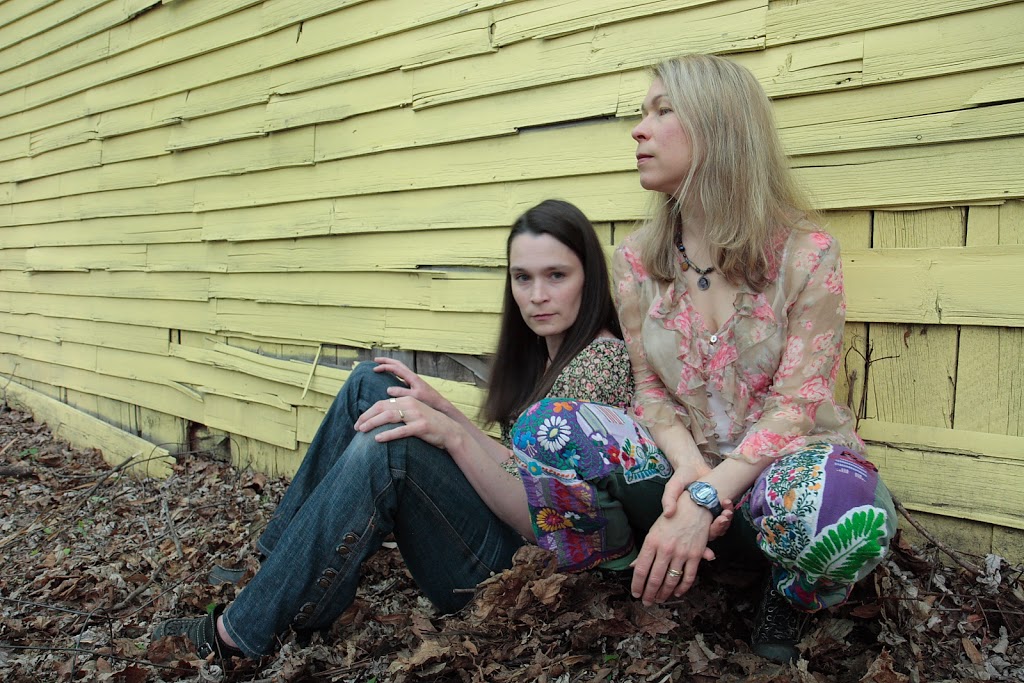 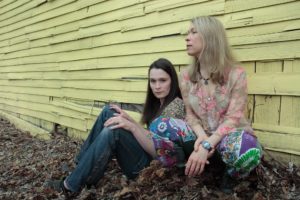 Nerissa & Katryna and the Falling Down Barn in 2007

I have sudden and severe laryngitis. I can no longer yell at my kids. In fact, I feel myself to be so at their mercy that I am being extra nice to them, smiling a lot, giving them heretofore forbidden juice boxes, letting Elle play “Two Grenadiers” over and over during her violin practice and not making her play her review pieces at all. Things are going so well with me not talking that I am contemplating feigning voicelessness indefinitely. Who, really, would miss my pontificating? (Don’t answer that.) To top it off, I made Elle read to me last night. She can sort of read, but she’d much prefer someone read to her, especially since we’re halfway through Harry Potter. But she gamely attempted Owl At Home last night, and because she had no choice, she made it through an entire chapter. I was reduced to clapping and vigorously nodding my head, poking at the page with one finger when she didn’t get the word right. It made me wonder if I would write more if I spoke less.

In my Underground Seminary, I have been instructed to ponder Mark 4:26-35, otherwise known as the Parable of the Mustard Seed. More on the Underground Seminary in a future post. The piece of this passage I particularly love is the brilliant observation that God’s Kingdom can come to us from the most minute of “seeds”; a stranger’s look of kindness. A song on the radio in the grocery store. Someone’s Facebook post. And the sower is oblivious to the “fruits” of her labor. Once she’s sown her seeds, she leaves the rest to the soil, the sun, the rain.

26 He also said, “This is what the kingdom of God is like. A man scatters seed on the ground. 27 Night and day, whether he sleeps or gets up, the seed sprouts and grows, though he does not know how. 28 All by itself the soil produces grain—first the stalk, then the head, then the full kernel in the head. 29 As soon as the grain is ripe, he puts the sickle to it, because the harvest has come.”

The other big event in our lives is that we are finally attempting to fix our falling-down barn. I had huge fantasies of renovating it and turning it into a writer’s den/underground church/Tom’s office/yoga studio/guest house. That will have to wait until the sales of The Full Catastrophe exceed $5 million/our kids get through college/Universal Health Care passes. In the meantime, if we don’t salvage what is there, we will have to tear it down (which would not be free–it would cost us $10,000 and then we’d have no place to dump our stuff, I mean keep our bikes and kayak and canoe.)

It’s not the money I mind. It’s that we are spending our early mornings cleaning the thing out. We discovered a squirrel’s nest the length of almost 4-year-old Jay, way in the back. And among the squirrel’s treasures was a box that contained all my old arrangements for Tangled Up in Blue and subsequent singing groups I ran pre-Nields (Tintinnabulations, A Capelicans, the Jimmies; groups we ran while teaching high school). GOLD! Hooray! Plus a bunch of press shots of the trio Nields that freaked us all out. And, the coup de grace, the program from the Newport Folk Festival 1994, the year we got to play it.

That was almost twenty years ago, and it was surely the turning point in our career. We got the gig because we had become friends with the associate producer’s daughter (Nalini Jones, now a writer and mom) at the Loomis Chaffee School where we were teachers and dorm adults at the time. When I close my eyes, I can feel myself back up on that stage, the sea air over Fort Adams blowing my hair into my eyes, my mouth aching from grinning so much. We played first in the line up, and people were still streaming into the park at the beginning of our set. We sold over 200 copies of our then-new CD Bob On the Ceiling, and from that moment, everything about our career sped up dramatically, shaking the tree we lived in until we all came tumbling down, but not without a lot of shouting for joy into the wind. 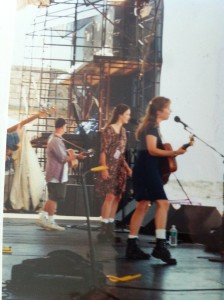 Nalini had asked me to write for the program, an essay called “Know Your Song Well,” about being a folk musician in the early 90s when folk was making a comeback. I will post this essay separately, but for now I will say that reading it made me realize that my band came along at the most fortuitous time, and that if we were in our mid 20s now instead of then we probably wouldn’t have had a shot. I don’t write this to take away an iota of our hard work and possible talent; but I do say it to make the case for fate, for history, for the Perfect Storm of events in any person’s life or career. Or for the winds that blow that little mustard seed here and yon. Who knew what we sowed then? Who knew where those 200 copies of Bob on the Ceiling went?

Katryna and I have been talking a lot lately about fame. I have written this before on this blog, but when we were in the van driving around and around, Patty used to ask, “Would you rather be rich or famous?” “Rich,” said a couple of members. “Famous,” said a few others. And I said, “Neither. I want to be influential.”

Of course, if you believe the Law of Attraction, this was a big mistake on my part. Everyone is influential. I should have manifested money and acclaim instead. Then I’d have my barn cum church/writing den/office/guest house. But on the other hand, it is really lovely to have exactly the amount of fame and money that I do have. It’s perfect. If I had any more money, I might not teach as much as I do, and teaching is so good for me, so pleasurable, so connecting. And if I had any more fame, I would feel scared. As it is, I have the kind of fame where people I don’t know are nice to me for no reason at all. Occasionally friendly people come up to me at the airport and tell me they saw my band fifteen years ago in Ann Arbor, or Austin TX, or Portland OR, or South Carolina (we were always playing in South Carolina.)

Last Thursday we had the great privilege to play a house concert in Rhode Island, in a house overlooking Narragansett Bay. The folks who opened their home to us had first seen us in 1994 at Newport and had bought a copy of Bob that day. 18 years later, their home was filled with friends who listened as attentively and laughed as hard as any audience we’ve ever had. There were 40 people there that night. That might seem small compared to the 2000 we played for at Newport in 1994, but to me, that night felt just as magical. What is the Kingdom of God? In a word, Unity. That feeling that you are a part of something so much bigger than yourself, so much more than you can ever hope to understand. As a performer, nothing makes me feel as whole, as unified, as part of some bigger mystery than singing my songs with my sister to an audience who gets it. What is the Kingdom of God to you? 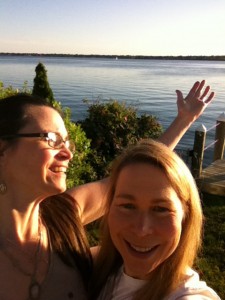 30 Again he said, “What shall we say the kingdom of God is like, or what parable shall we use to describe it? 31 It is like a mustard seed, which is the smallest of all seeds on earth. 32 Yet when planted, it grows and becomes the largest of all garden plants, with such big branches that the birds can perch in its shade.”

I haven’t written on this page since December took me down the dark rabbit hole of holiday prep, end-of-year festivities, and of course the terrible news. I have written many…