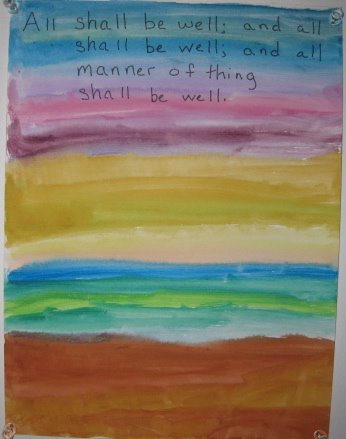 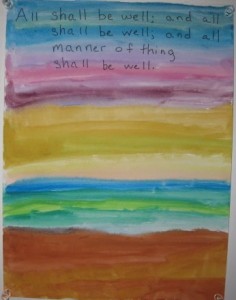 We sense that there is some sort of spirit
that loves birds and animals and the ants –
perhaps the same one
who gave a radiance to you in your mother’s womb.

Is it logical you would be walking around entirely orphaned now?
The truth is you turned away yourself,
And decided to go into the dark alone.

Now you are tangled up in others, and have forgotten
what you once knew,
and that’s why
everything you do has some weird failure in it.
-Kabir

Spring always surprises me. Coming from New England, I never trust it, but today I acted as if I did. I woke early, ran around the park and noticed a slew of yellow, purple and white crocuses about to burst in our neighbor’s yard. I meditated on the Taoist concept of wei wu wei––”doing without doing”––and marveled at how that always seems to be my answer.

Lila and I spent the non-Sesame Street portion of the morning painting and drawing. I have finally found the activity that we both love doing so much that while we are doing it, time falls away and there is no need for conversation or music or any kind of distraction. I could paint with Lila all day. 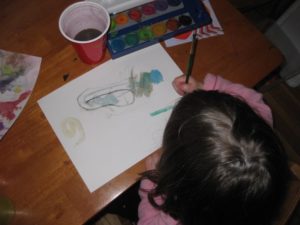 The other focus of the morning was on potty training, of course. A mom friend of mine told me yesterday that she is giving her three-year-old a lollipop to suck on while sitting on the potty. I won’t talk about our other experiment since it’s so embarrassing and it didn’t work, but it involved putting the little potty seat in front of the TV in the hopes that that would keep Lila interested. (With copious amounts of newspaper under it, but still. Gross.)

Our big outing of the day was to the food co-op to buy organic lollipops. When we got home, Lila sucked down one whole pop, insisting that Johnny, still in his car seat and therefore a captive audience, be placed right in front of her, “So I can show him how I’m pooping and eating a lollipop.” I was happy with this arrangement as it allowed me to unload the car of the five grocery bags and put said groceries away and clean up the kitchen. But when I went to check on her progress, though Johnny was amused, Lila had not exactly delivered. She was, in fact, crunching the remains of her Pomegranate Pop.

“No,” I said, switching tactics as I do at the first hint of defeat. “Not till after you poop on the potty.”

So Lila scrunched up her face and trembled and immediately produced! We both shouted and whooped and celebrated and hugged each other around the neck. Johnny cackled. Lila was given a stash of goods not seen since the last episode of “The Price Is Right”: another lollipop, five M&Ms and five pennies to put in the Bribe Jar. Also stickers, which no longer have a home, but I told her she could put them wherever she wanted. (The carpet, it turns out.)

When I came back from my appointment, her babysitter reported that she’d pooped in her training pants, but I didn’t care (much). I’ll take these little victories wherever I can get them. Katryna called this afternoon while I was out to remind me that a pair of sisters we know (not us) who are among our favorite people ever, and the living example of how you would want your daughters to turn out, have told us on several occasions that their mother claims to have completely failed at potty training. Yet look at how well they turned out. So I am going to stop worrying and just enjoy this kooky time. We are having fun, my daughter and I. She is, for sure. She thinks there is nothing in the world funnier than poop, and who could argue?

Meanwhile, Johnny is perfecting his porpoise-like manner of ambulation. He gets up on all fours, rocks front to back about five times and then hurls himself onto his belly, a few inches forward. Sometimes he goes from all fours to an elegant downward dog, hurling himself into bow pose. He loves that–it makes him chortle.

Once I watched television. I used to love it. I miss it. My sister Abigail, who shares my sense of humor to a T sent me a bunch of links, the most apropos being this one which made my stomach muscles hurt from laughing so hard. Please watch and enjoy. Happy spring!

Today in our writing class, we read from a great book called Writing Begins with the Breath by Laraine Herring. She encourages her readers/writers to “Conjure a smell that reminds…