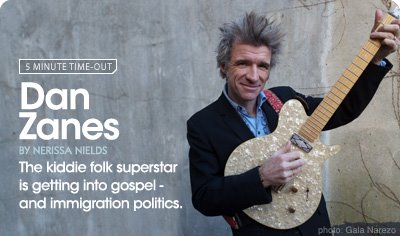 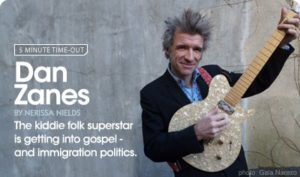 The interview I did with Dan Zanes last March is up on Babble.com. Check it out here.

Something good always happens. Either I get a good night sleep, or my kids wake me up and I get to be with them in the middle of the night. Last night was such a time. Elle woke us up at 12:45 and Jay woke up at 4:20. I’ve been acutely aware recently of how brief this whole parenting young children gig is, though our nocturnes did result in a very useless me midday. Elle and I were in the music room watching “Sid the Science Kid” and eating lunch. I was coercing her into finishing her bowl of tuna fish by bribing her with little whole wheat crackers while simultaneously modeling excellent Buddhist behavior by reading New York Times articles online, thereby barely paying attention to the theme of the show, which turned out to be teeth brushing.

“When this is over,” I said, not taking my eyes off the computer screen, “You’ll need to go up for rest time.”

“Okay, Mama,” Elle replied staring at her own screen and bending her leg backwards in her hand.

A few moments later, I followed her upstairs, Jay under my arm. Elle scampered directly into the bathroom. I thought she was going to take the opportunity to pee, which in itself would have made me happy, but what occurred instead blew me away. She climbed up on her little stool and grabbed her toothbrush, put the tiniest smear of toothpaste onto the bristles, sucked it off, brushed her teeth (not very carefully or thoroughly, but still), rinsed it, and then picked up one of those little wrench-shaped flossers the dentist gave us and stuck it between her teeth a few times. I stood next to her, my mouth open in pure astonishment. She gazed back at me inscrutably; but what I think I was seeing in her face was my future: See, Mom. I know how to take care of myself.

When we visited the dentist for her first check up, the dentist said, “Brush twice a day.” Elle has since repeated this to me, as in, “Mama! Don’t forget! We need to brush twice a day!” And even so, I do forget. I am fairly good at reminding her father to brush her teeth after her nightly bath, and I do brush my own teeth, and I even floss if I happen to have the floss near my bed and some good reading material to entertain me while I do so, but I am utterly incapable of remembering to brush anyone’s teeth––hers or mine––at any other time in the day.

I come by this honestly. I don’t think my parents ever brushed our teeth for us. I don’t think I owned a toothbrush until I was in seventh grade when peer pressure linked with fear of bad breath compelled me to improve my hygiene. I have a distinct memory of Kim Hedberg, one of our babysitters, teaching us to conserve toothpaste by only dabbing the bristles with a smidgen. I’d previously believed toothpaste to be a kind of dessert, and that any less than two inches couldn’t possibly be effective at fighting cavities.

My parents did a lot right, but basic hygiene was not really on their radar. They were young; 23 and 24 respectively when I was born, and they’d gotten married even younger, at 19 and 20, and there was always a sense in which we were witnessing their transformation through adolescence as we ourselves were growing up. (Let the record show that they are paragons of self-care today. They are always on the up and up around issues like Omega 3’s and fiber and the ratio of aerobic to non-aerobic activity. But this is now. That was then.)

Speaking of hygiene, I just found the remnants of an M&M on the counter. The mouse has eaten all the color coating off and just left the chocolate innards. What does THAT say about the predilections of rodents?

Elle and I weaned when she was 13 months old, but ever since Jay’s arrival, she likes to indulge in her breastfeeding habit every once in a dull moment. Jay was sleeping in, and I decided it was high time for him to show his face and join the family fun, so Elle and I climbed the stairs to wake him up. This is her favorite thing to do, even when it’s not sanctioned by her family. Often she wakes him by screaming in the halls when we have just succeeded after 45 minutes of rocking and cooing and singing “Hush Little Baby” to get him down, and at these moments we are not happy with her. Anyway, today she hung on the bars of his crib and spoke to him in a tiny little voice, “It’s okay, Jay. It’s okay, Buddy.” I picked him up and lay him down next to me on the bed. Elle immediately wanted in.

“Can I have this breastess, Mama?” she said pointing to the available right one.

“Sure,” I said, and lay on my back, a child on each breast. This moment; this moment I will always remember.

After a few minutes, Elle jumped up to do something, I forget what––maybe brush her teeth. As she was on her way out the door, she turned and shouted, “Save that breastess for me, Mama!”

I was talking to another mom today who has a heartbreakingly adorable two year old.
“How do you even stand it,” I murmured, looking into his big green eyes and porcelain skin.

She laughed and pointed at my son, snug against my side. “How do you?”

“I don’t,” I say. “My whole problem is that I am tortured by my intense love for my kids and simultaneous total exhaustion which is a direct result of my being a mother.”

We both laughed. She said, “There’s your answer. That’s how we stand it. We’re too tired to take it all in, and if we could, they would kill us with cuteness.”

I Saw Peter on the Street Today

I saw Peter on the street todayOlder, with a young womanJust like alwaysHis hair still long but thin and grey, Fly-awayLoose curls like cloudsCheekbones and shoulders all anglesSmall Lennon glasses,…

…But her soul, only partially unpackaged, singsthrough the slate that guards it, contacts those of us waiting here with a splay of its softscrutinizing fingers. Her soul is a sapling…

Pete Kennedy using uke to play slide: Here are some images from the stage of Appel Farm Festival. I got to sit next to my favorite blues singer, Guy Davis….