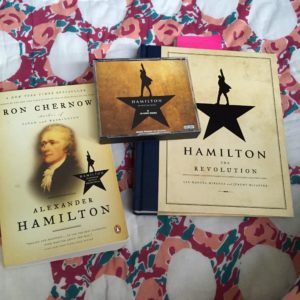 “What is to give light must endure burning.”
-Viktor Frankl

If, on the night of June 2nd, you heard a bloodcurdling scream coming from a neighborhood in Northampton, that would have been me on learning that, for my birthday, my incredibly generous parents (via the urging of my hugely thoughtful and loving sister Katryna) had bought Tom and me tickets to go see Hamilton the Musical. On June 28. Two weeks before the Tony-awarded cast’s contracts were up. I was going to get to see the original Broadway cast. In person. I screamed for a full 10 seconds. More on that below, but first I have to say that I was going to post that picture of me surrounded by my new Hamiltome (a huge, beautiful libretto with photos, notes and essays on the production), my soundtrack and my copy of the Ron Chernow biography. But Katryna said, “You can’t tell people about this! They will kill you! Plus, it’s rude.” So I didn’t say anything until we actually went. That was still probably rude. But I could not keep quiet.

I am in the Adirondacks right now, writing with my retreatants at my parents’ house. Up on the wall of the kitchen is a snapshot that captures a moment of pure perfection, taken about 4 years ago, of my two kids when they were still in footie pajamas. They are sitting, side by side, at the foot of the stairs, waiting for their grandparents to come down. The morning light shines in on their brown heads, and they are both turned slightly to look at the photographer. One of them has an eager look on her face; she knows the glories that will come when her grandparents descend. The other is along for the ride, because he knows his sister usually has a good plan. They are alert, attentive, on the cusp, sitting up straight and tall, criss-cross-applesauce legs. They are snuggly and delicious, and when I see that picture, I melt. I want to scoop them up and hug them. I regret ever having done anything other than scoop them up and hug them, hold them to my chest and savor this rare period of time. Why, in the face of such wonderfulness, would a person do anything else? And yet I know that during that time, my mind wandered, just as it did (a very little bit) as I sat in the equally perfect production of Hamilton I was lucky enough to see. 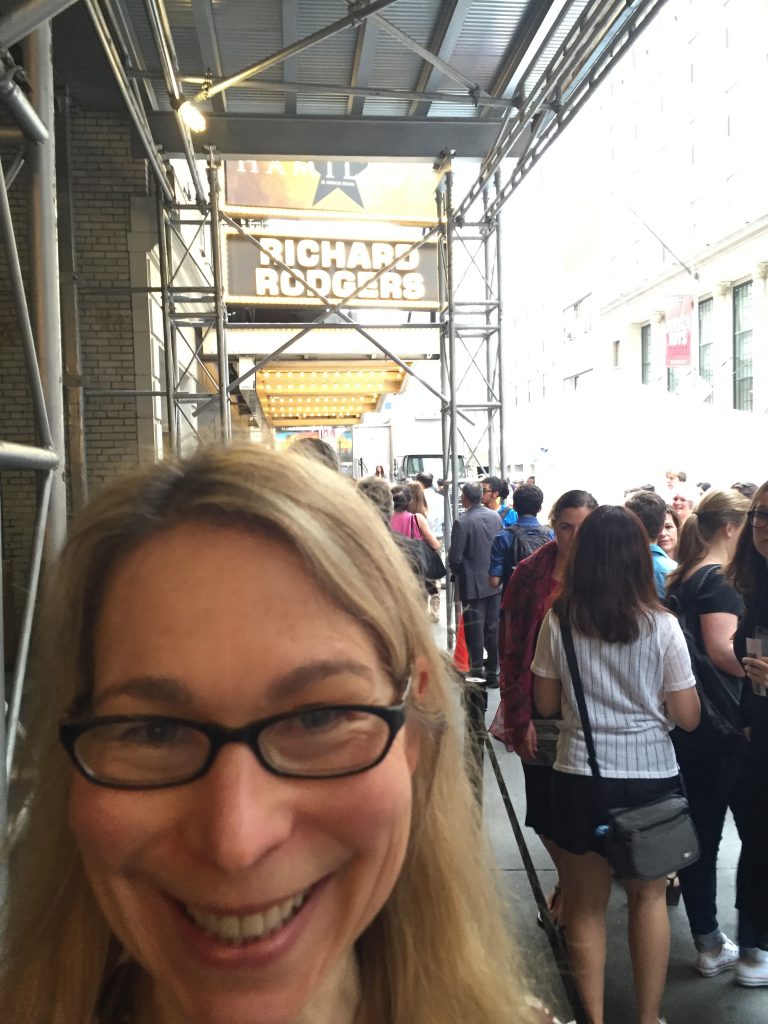 Like most folks who have heard the soundtrack more than once, I am a huge Hamilton fan. I love pretty much everything about it:
-the incredible songwriting (which I think is even better than Sondheim’s because it has so much heart and pathos)
-the fact that Lin-Manuel Miranda got the idea from reading that big fat historical biography of Alexander Hamilton
-the amazing history lesson our kids are getting (mine are obsessed and know every word, ask me unanswerable questions about John Adams and Lafayette, are furious about Washington and Jefferson owning slaves)
-the politics (how much have things not changed???)
-the humor (King Louis’ head)
-the cast that looks more authentically like today’s America than any play I’ve seen
-the cast, the cast, the cast, oh my GOD, the cast!!!!
-the incredible study of ambition that we get in comparing Hamilton and Burr
-the awareness of privilege and class that we see as Alexander rises up from his origins in the West Indies
-the vast scope of the musical’s ambition
-The beautiful, inspiring love story
-the fact that it is the first musical I have been interested in since I was in high school
-the fact that it has made me fall in love with live theatre again
-the way in which L-MM composed the “mixtape” on Logic (what is Logic? How the heck can I learn it??? Can someone help me? please?)
-the references to the Beatles (of course)…

We arrived at the theatre at 3pm, and I was so nervous I was trembling. I was stuttering. I couldn’t believe I was at the Richard Rodgers theatre and that I was about to see my new musical heroes and heroines. I have listened to the soundtrack *nonstop* since my nephew William introduced me to it in April, and I have come to love the cast members the way I loved the Fab Four. I feel like I know them. I can’t imagine seeing Jefferson played by anyone other than Daveed Diggs. Or a different George Washington; who can possibly fill Chris Jackson’s shoes? So I was trying hard to pre-emptively lower my expectations on the experience, since there would surely be at least one understudy taking the place of one of my beloved leads. But when we got there, there were signs up everywhere warning the ticket holders that this production would be filmed.

And. Jonathan Groff, who had played the role of King George III onstage and on the soundtrack, and who had left the show in April, was coming back (*he’ll be back…*) for this performance.

GAH!!!!!!!!! ON TOP OF EVERYTHING, THERE ARE DELICIOUS BEATLES REFERENCES!!! IN THE AFTERMATH OF BREXIT!!! (which I loathe, but anyway, it’s interesting…)

Speaking of the Beatles, I have to say that I haven’t been this blown away and deeply inspired since 1977 when my friend Leila Corcoran introduced me to the Fab Four. But this brings something else up.

As inspired as I am by Hamilton, I am also daunted by it. I am almost defeated by its perfection. I am obsessed by its genius pacing. How did he figure out which parts of that huge book/huge life to include in the 3 hour story, and which parts to cut? He brilliantly tells the first 19 years of AH’s life in a masterful opening number:

How can any songwriter ever lift her quill again in the face of this? How can I even begin to approach my 850 page novel The Big Idea when I have in my head the perfection I witnessed on Tuesday night? My book is not as good as Hamilton. So why bother.

I told my friend this the other day. OK, my therapist. She looked at me and shook her head, as she often does. “Whaaat? You must be out of your GODDAMNED MIND….” No, just kidding. She said, “Um, why are you comparing a novel to a musical? And what does your novel have to do with Hamilton? Who, besides you, would even make a comparison of you to Lin-Manuel Miranda?”

I don’t know. It’s arrogant (*bastard*) to compare oneself to the likes of L-MM; one doesn’t usually compare oneself to Shakespeare or Mozart or even Lennon/McCartney. One just sighs and knows that there are some who achieve a kind of immortality, while most artists, even wildly successful ones, are content to get paid and to bask in the contained era of their fame.

How was the show? I was on the edge of my seat for the full 3 hours. I trembled throughout the first act. I wept all through the second (except when I was laughing). And yet, there was a way in which getting EXACTLY WHAT I WANTED left me feeling a bit…off. I know that sounds horrible and ungrateful. But what I mean is that it’s a strange thing to be fully satisfied,just as I was fully satisfied when I was cuddling my small children in their footie pajamas. And this is itself one of the themes of the play. “You will never be satisfied,” sings Angelica to herself and to Hamilton. These two characters have almost everything in the moment when she sings these words: wealth, success, beauty, love, family (though Angelica is lacking something very particular, of course….) Still, it’s a very difficult thing, even in the very very best of times, to remain fully and completely present. Even in the face of perfection––and an absolutely perfect entertainment experience––my mind sometimes went somewhere outside the Richard Rodgers theatre. (To my novel. To my children. To my concern about driving home after the show in the rain.) Also, and I am deeply ashamed to admit this, a part of me was convinced that this incredible good fortune (of getting to see the show, of getting to see the entire original cast) would not go unnoticed by the gods, and surely I would be smote somehow. So what is that about?

I need to add here that, besides the price of the tickets, there was a pretty significant cost to my birthday night. I sort of smote myself. My bloodcurdling scream seriously wrecked my voice. At the retreat yesterday, I had intended to do way too many things. Among them were to record a demo of Liv First’s song “The Shame Wars” for my friend Dar Williams, who will be singing it for the soundtrack that will accompany The Big Idea. It’s been a month since I screamed that bloodcurdling scream, but I still don’t have the full range of my voice back. I can’t cleanly sing the D above middle C, which used to be an easy note for me. I warmed up and warmed up, but the note is still not there. And I have in the back of my mind, “Payback. For all your good fortune. For getting to see Hamilton.”

I ended up macguyvering my little Casio keyboard (the song is played on piano) to make it a half step lower, and then I was able to sing the song. I sent it off to Dar, and I sent other songs off to the band. The experience of seeing that beautiful work of art last Tuesday stays with me. The songs are in me, the images and the dances too. Certain gestures I got to witness feel intrinsic now to my whole life. Just as the experience of witnessing my two children grow from babies to footie-pajama’d youngsters to the mountain-climbing violin-playing soccer-ball-kicking infuriatingly rule-breaking wonders they are today is woven into my blood and bones. Just as Hamilton and Burr wove themselves into each others’ blood and bones, so that by the end of Hamilton’s life, he has a bit of Burr’s hesitancy and judiciousness, while Burr has some of Hamilton’s go-for-it ambition. Time will tell if I get my D back. I will go and warm up my voice again today and see. If not, I’m willing to *wait for it.*