We meet at 3
I have coffee, you have tea cause you’re
Such an Anglophile
But I’d take Paris anytime…

-Some band from the 90s. Points if you know the name/song

We took a Eurostar from London to Paris, and we are now on our return trip. This train passes under the English Channel at a rate of 285 km/hour. It’s fast! Right now, the countryside is whizzing by–a sight for sore nature-starved eyes. We are all homesick and so ready to go home we called British Airways to see if we could move our return forward by a few days. But it would have cost us $1200 to do this, and we wouldn’t have been able to sit together. Oh, well; we’ll just have to endure 2 more days of Europe.

My kids’s assessment of Paris was stark:
– Everyone here is going to die of lung cancer and, oh well, then there’ll be no more Paris!
-This is the worst city in the world!
-There is nothing to do here. This is way worse than London!
-Why are they so mean here?
-Why don’t they like kids?
-Why is it that everyone speaks English to us when we speak French to them?

Ah, age-old question, that last. I tried to be diplomatic, and explained that in Europe, school kids learn more languages than we do, but they saw right through that.

But I am getting ahead of my story: we arrived Wednesday late afternoon. On the train ride, spirits were high, and I was ecstatic about returning to a city I love so much. “Thank you,” I kept murmuring to Tom, whose idea this was. We’d booked an AirBnB in Montmartre just north of Sacre Coeur Basilica. This neighborhood was a place I’d wanted to visit when we were last here in 2015, but unseasoned as we were then in the realm of subways, it had seemed too far away. 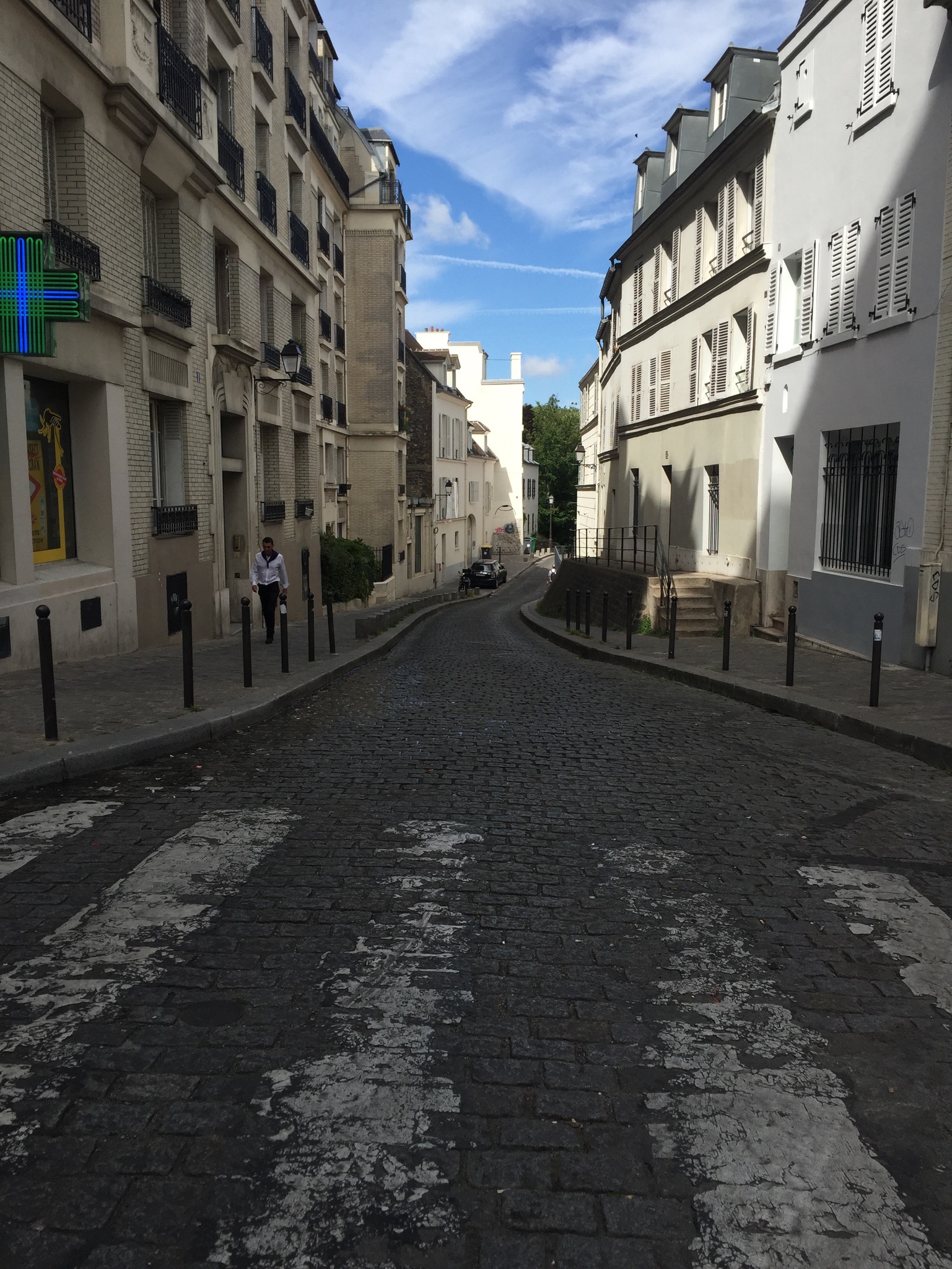 But when we emerged from the Metro at our stop (Porte du Clinquecourt), I was unprepared for my children’s experience of this neighborhood. “Mom! It stinks here! It smells like pee! There is literally pee on the streets! And dog poop! Wait, is that dog poop, or human poop?” Finding our flat––huge, airy labyrinthian, on the fourth floor with all the amenities–– did nothing to increase their confidence. It didn’t help that the elevator was only big enough for two of us without baggage, or that the bathroom was divided, with sinks, shower and bathtub on one end of the apartment and a little room with just the toilet all the way at the other. Or that we couldn’t figure out how to work the fancy Bosch electric stovetop. Or that the restaurant our host recommended served things like calves’ brains and sheep intestines and sausages that are supposed to smell just a tiny bit like poop. (Lots of poop in Paris.)

So we chose an Algerian restaurant very near our flat, since we were hungry. In Paris, they don’t allow you to eat dinner until after 19:00 (7pm). Before that, they are napping. The woman was from Algieres, and was very nice, but we seemed to be the only patrons, which made us nervous. Johnny ordered chicken, and though he insisted he hated couscous, once it arrived all steaming and soft, he inhaled it. Lila’s lamb was melt-in-your mouth. Tom got a Mahkfoul which he loved, and I got a chicken tagine that was exquisite, especially when I tricked it up with some unidentified red pepper condiment. I also got some soupy carrots and a small delicious salad with olives. We thought things were looking up, and were excited for the next day. On the menu: Sainte Chappelle, Musee D’Orsay and the Eiffel Tower, bien sur. 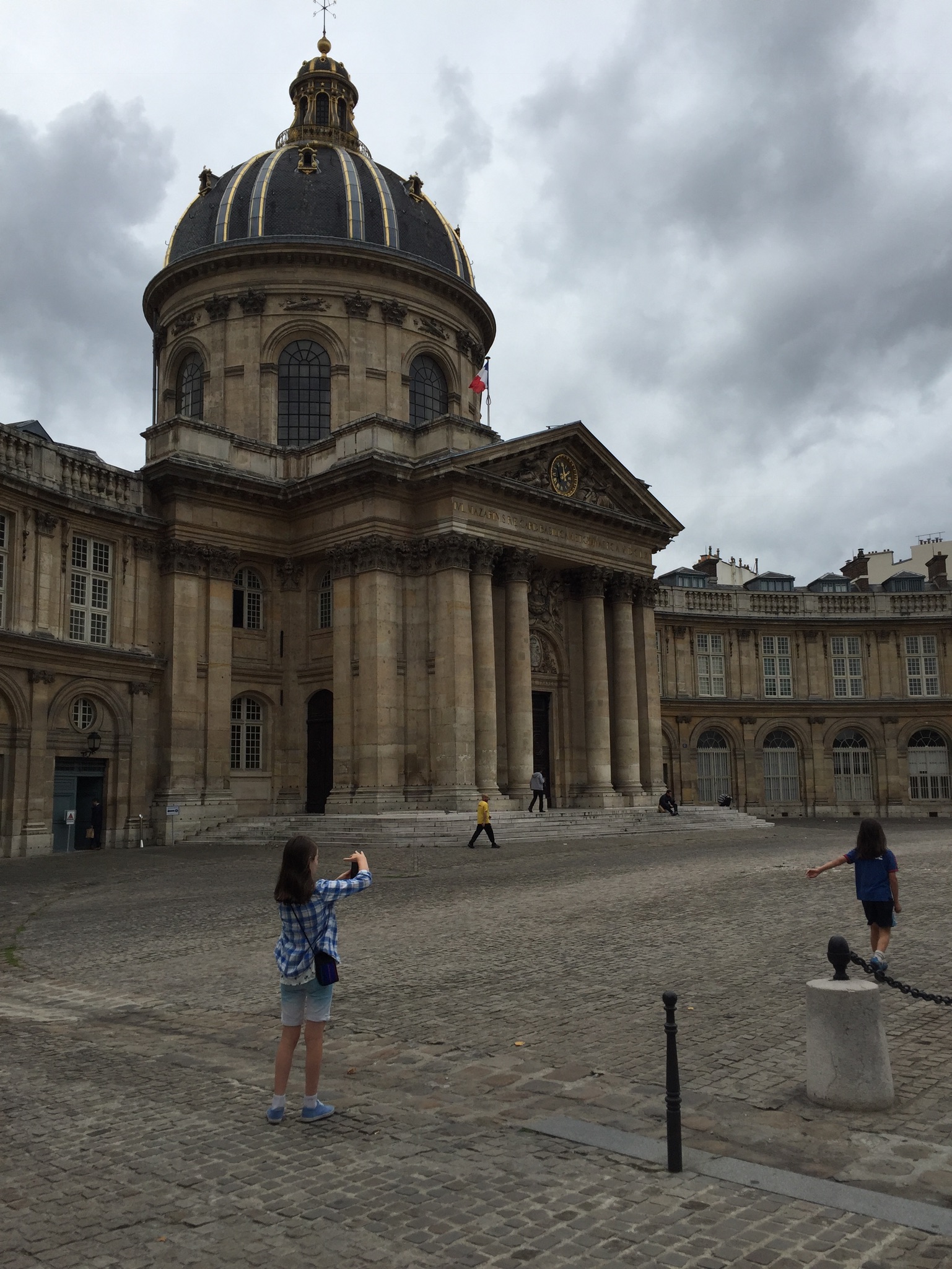 But Isle de la Citié was no more impressive to the kids than Montmartre had been. They were not swayed by the architecture nor the river Seine, nor even the copious amounts of treats we ladled on them; even Johnny’s Nutella crepe or Lila’s tiny little apple pie with a scoop of vanilla ice cream so rich you could see the specks of vanilla bean.

They did gobble it all up, including a pizza-thing on French bread at a sketchy dive on the Rive Gauche across from Notre Dame, where we discovered that in Paris one has to pay about half a Euro to use the bathroom, even when one is a paying customer. Per person!

Speaking of Notre Dame, when I pointed it out to Johnny, I said, “Do you know that took 150 years to build?”

“Well, then they wasted their time!” snapped Johnny.

We made our way along the Seine until we got to Musee D’Orsay. I was keen to go, because the one place I had loved as a cantankerous 12-year-old had been the Jeu de Pomme, the precursor of D’Orsay, whose collection is housed in a fabulous old train station. 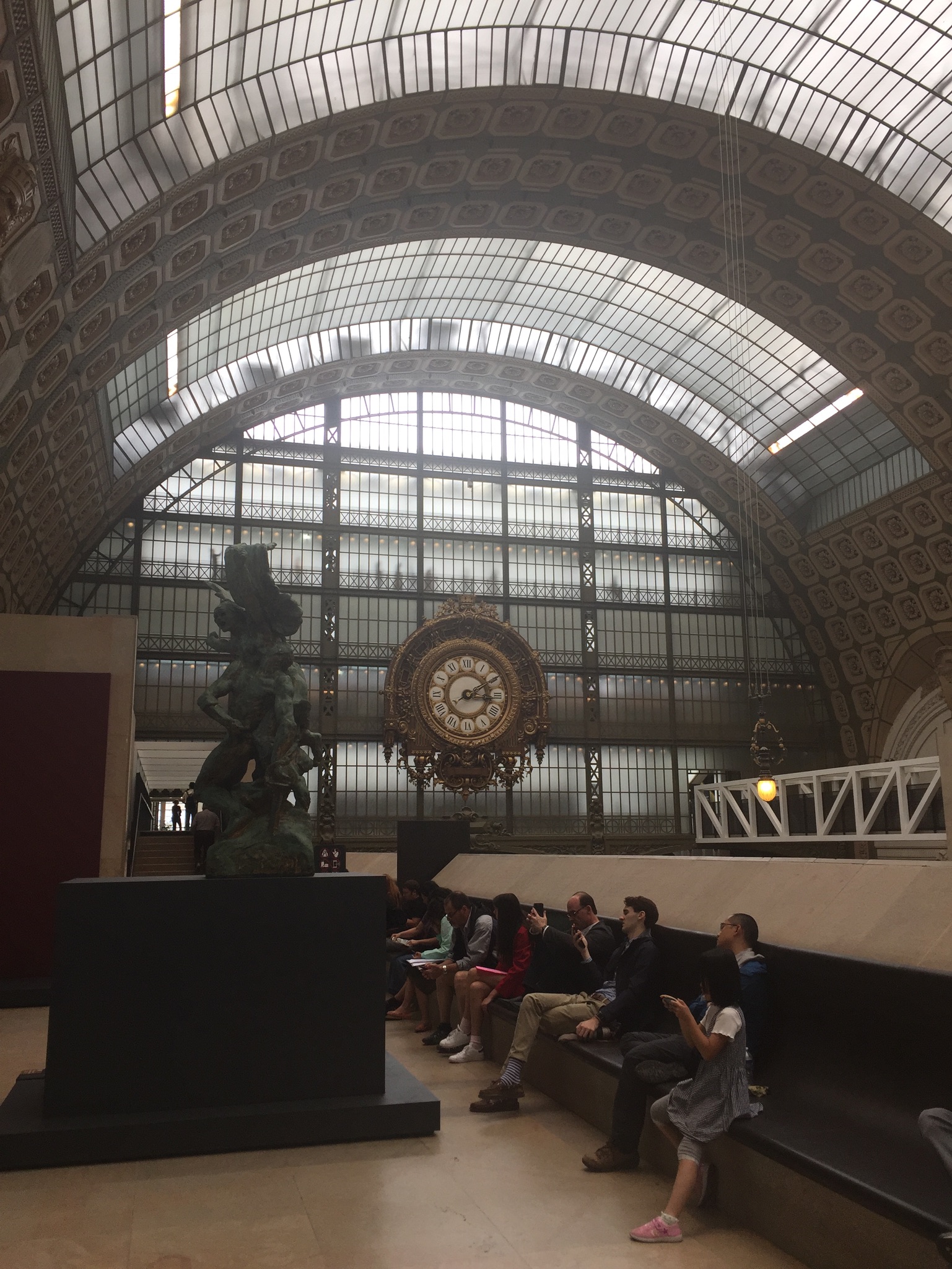 I wasn’t naive enough at this point to think my kids would actually like it, but I had taken heart from a friend’s email the day before. “I hated traveling so much as a kid,” she’d said. “And I remember one day being dragged all around Moscow, and my parents saying, ‘Just a little further! We’ve got to see something red!’ It turned out it was Red Square, which meant nothing to me at the time, but thereafter, every time someone mentioned Red Square, or we studied it in school, I felt such pride and gratitude for my parents.” So I saw visiting this museum as money in the bank. 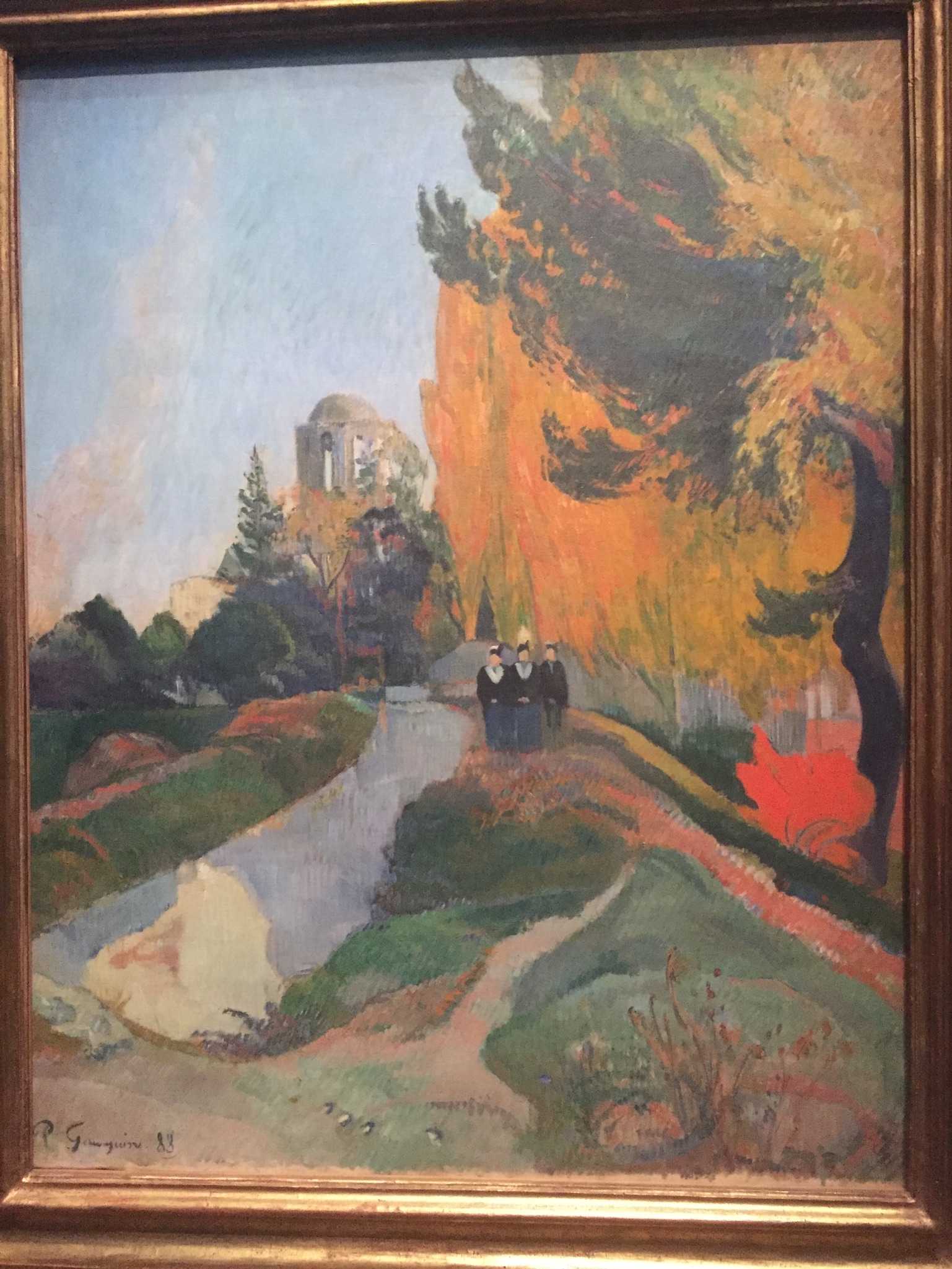 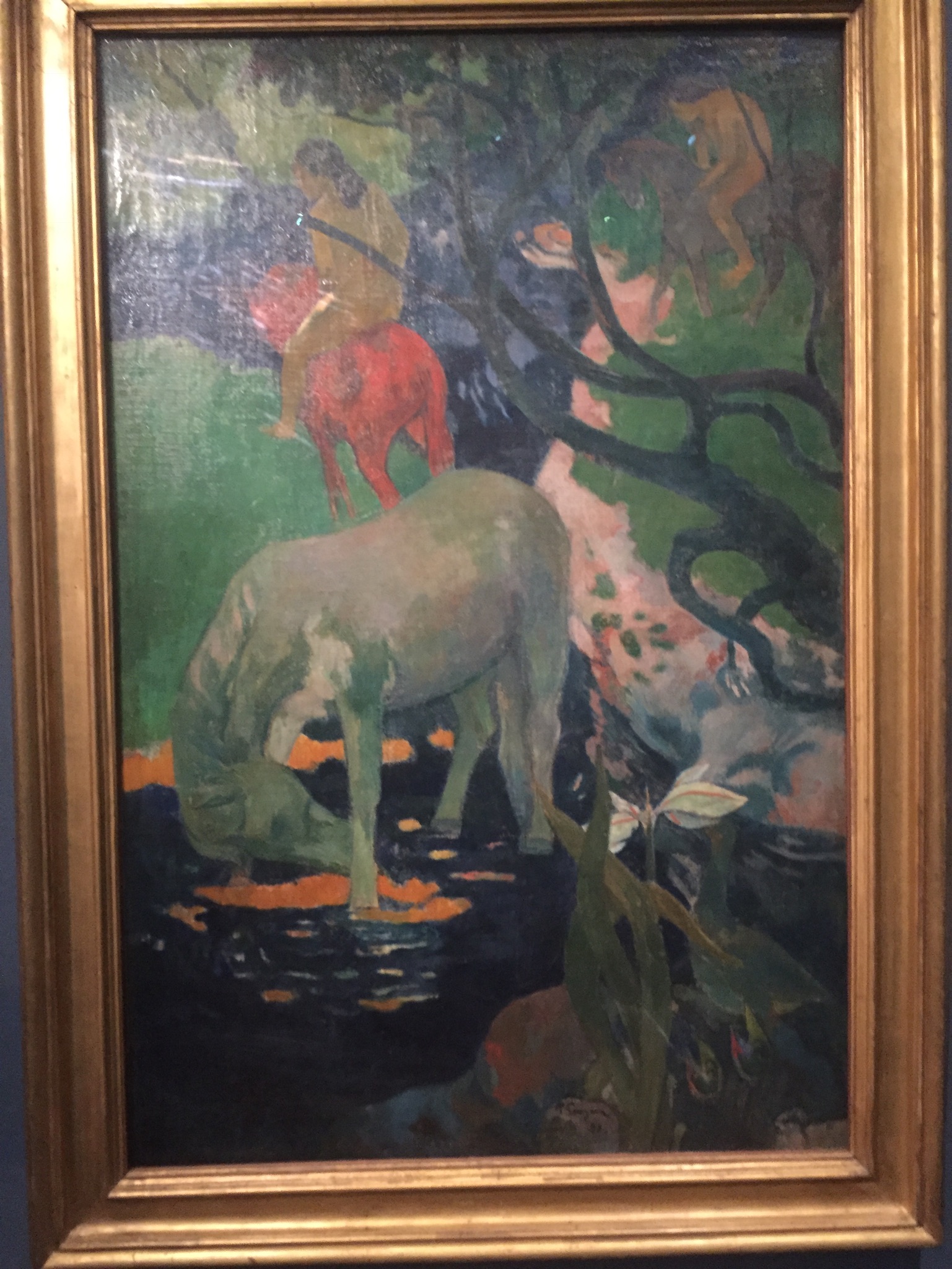 We kind of speed-dated this museum, as is our wont, but I felt so happy to be there and to feast my eyes on these paintings and sculptures. We left the kids on a bench on the second level with a deck of cards. But when I found the Van Gogh section, I went back to get them. Their fabulous art teacher Jen Lilly had infused them both with a respect if not love for M. Vincent, and sure enough, they jumped up in the hopes of seeing “Starry Night.” But the portrait of a starry night was not the one they knew and loved. They were OUTRAGED when I looked up its whereabouts and discovered it was in the Museum of Modern Art in New York. Johnny especially. “What????” he cried. “But why?” As if all art in the world belonged in this dreadful Paris. Now there was NOTHING good about this place. 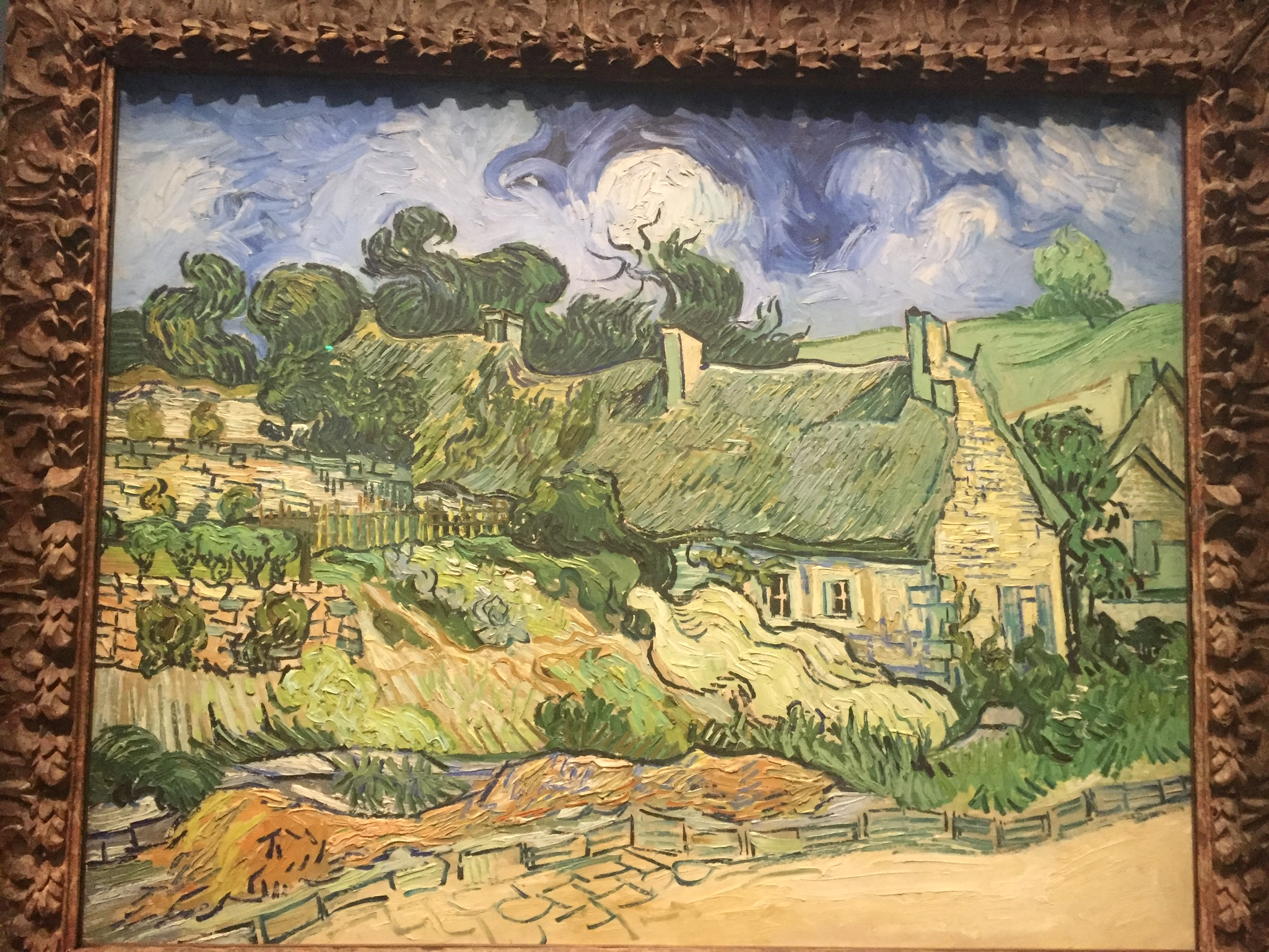 They refused to go any farther, so we abandoned our plans to visit La Tour Eiffel (which I was glad about), and instead played wall ball against a bank of the Seine. Then on a whim, I led them down some avenues until we found ourselves in the neighborhood where Tom and I stayed in 2015. It’s much more upscale than Montmartre, and the kids were suitably impressed, but they wanted to know why we hadn’t found an AirBnB here. We gave up on going out to another restaurant, and instead got delicious comestibles for our apartment from a kind of Whole-Foodsish store on steroids. (This was the night we tried to find an early return.) 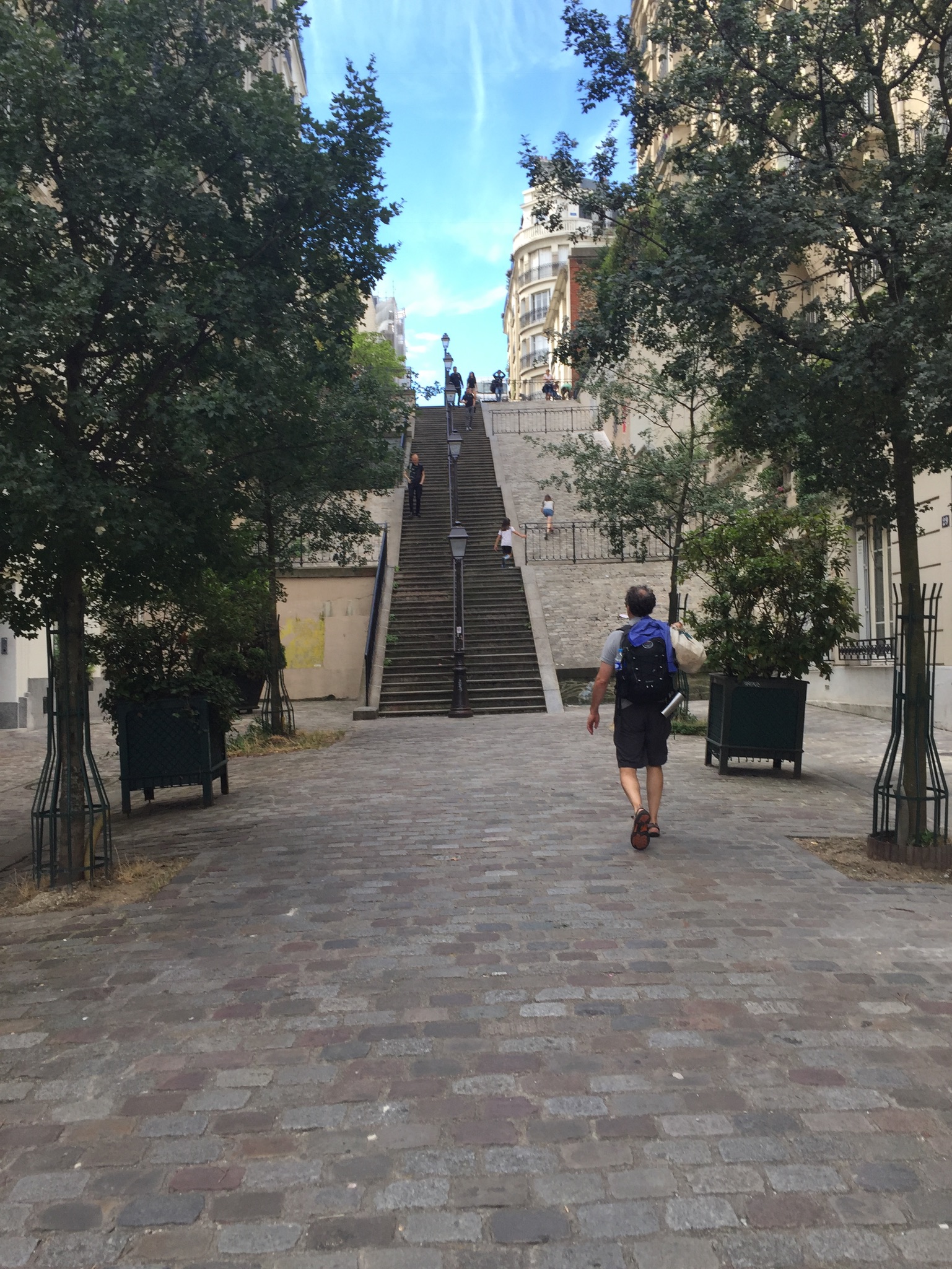 Today we climbed up the stairs and hills to get to Sacre Coeur, the incredible view of the city, and most importantly a Starbucks. Again, the kids disparaged Paris, moaned about the hideousness of it all, and declared themselves homesick for London. I have to admit, I am too. I can’t wait to get back to our sweet little flat. I am quite fond of our neighborhood, and yearn to speak English. 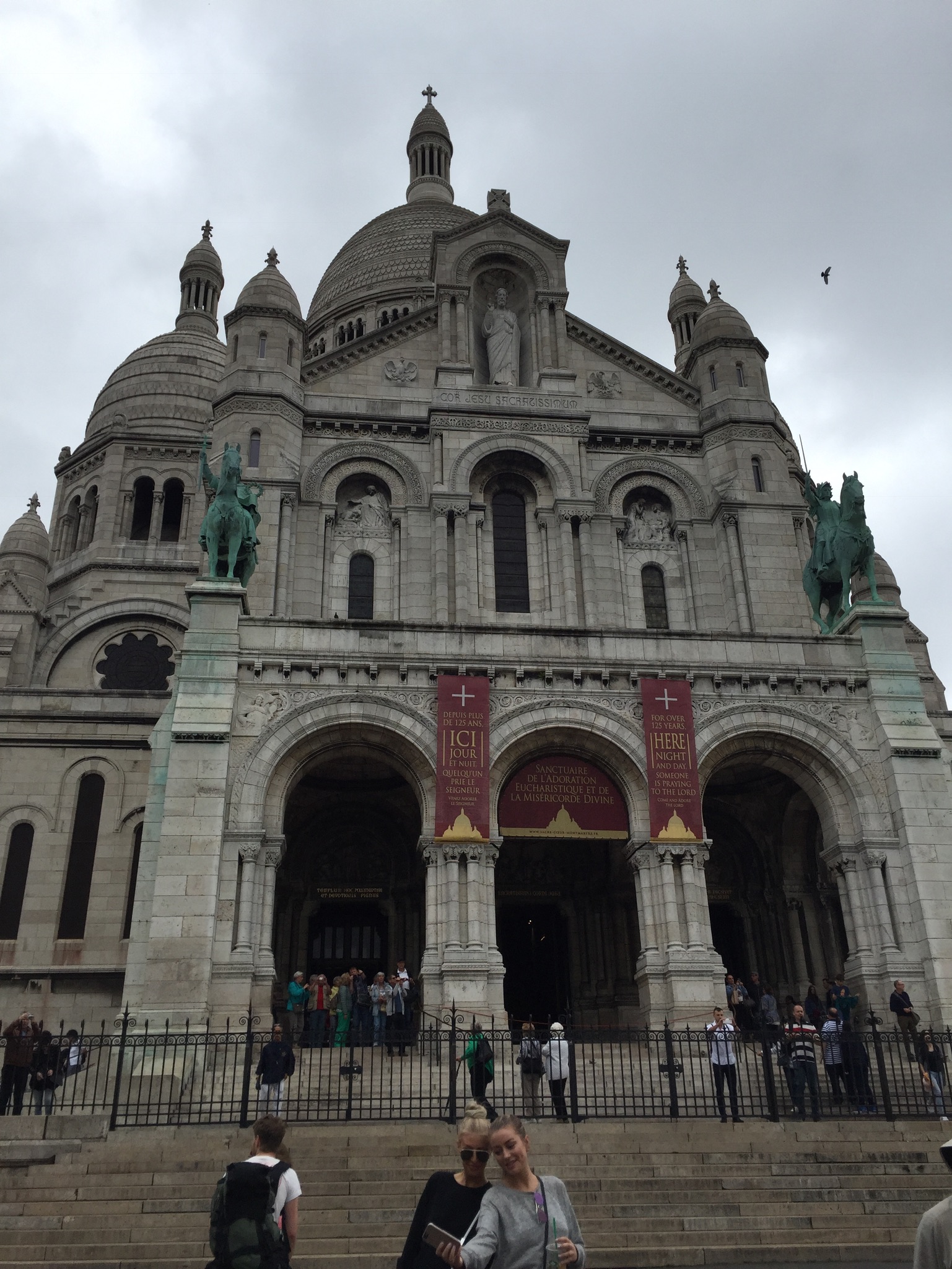 Last night, I had a dream that made all of these experiences gel. In it, I had the chance to adopt a year-old collie that I was somehow beholden to. But in order to adopt this dog, I had to give away our puppy Hudson. A woman who looked exactly like our dentist’s receptionist wanted Hudson, and so I gave him to her. I embraced my new collie, feeling like I’d done the right thing, somehow. But Collie promptly peed on our rug. Then, when I took her out to the back yard, she ran away. “Oh,” said a man in some kind of position of authority. “You’ll need to take this dog to a trainer. This breed needs a lot of education.” (!!!!!)

I felt incredibly sad that I’d given away Hudson. I could keep both, couldn’t I? No, apparently I couldn’t. I had to choose. But it was too late to choose. The dental receptionist did not want Collie. She had already bonded with Hudson. I rode a bus home, heartbroken.

So–you can analyze me yourself, but here’s my take. The collie represents my past, my family of origin, my heritage (my grandmother always had collies, and that was the first dog I ever knew). (Full-bred, well-educated, helpful, somewhat vain dogs???) Hudson represents my present and future, my now-family. And I am in danger of trading away the present for the past. Even more of a reason to listen to my kids when they ask, “Can we just do nothing all weekend? Just stay in our apartment in London and not have to go to any more sites or museums?”