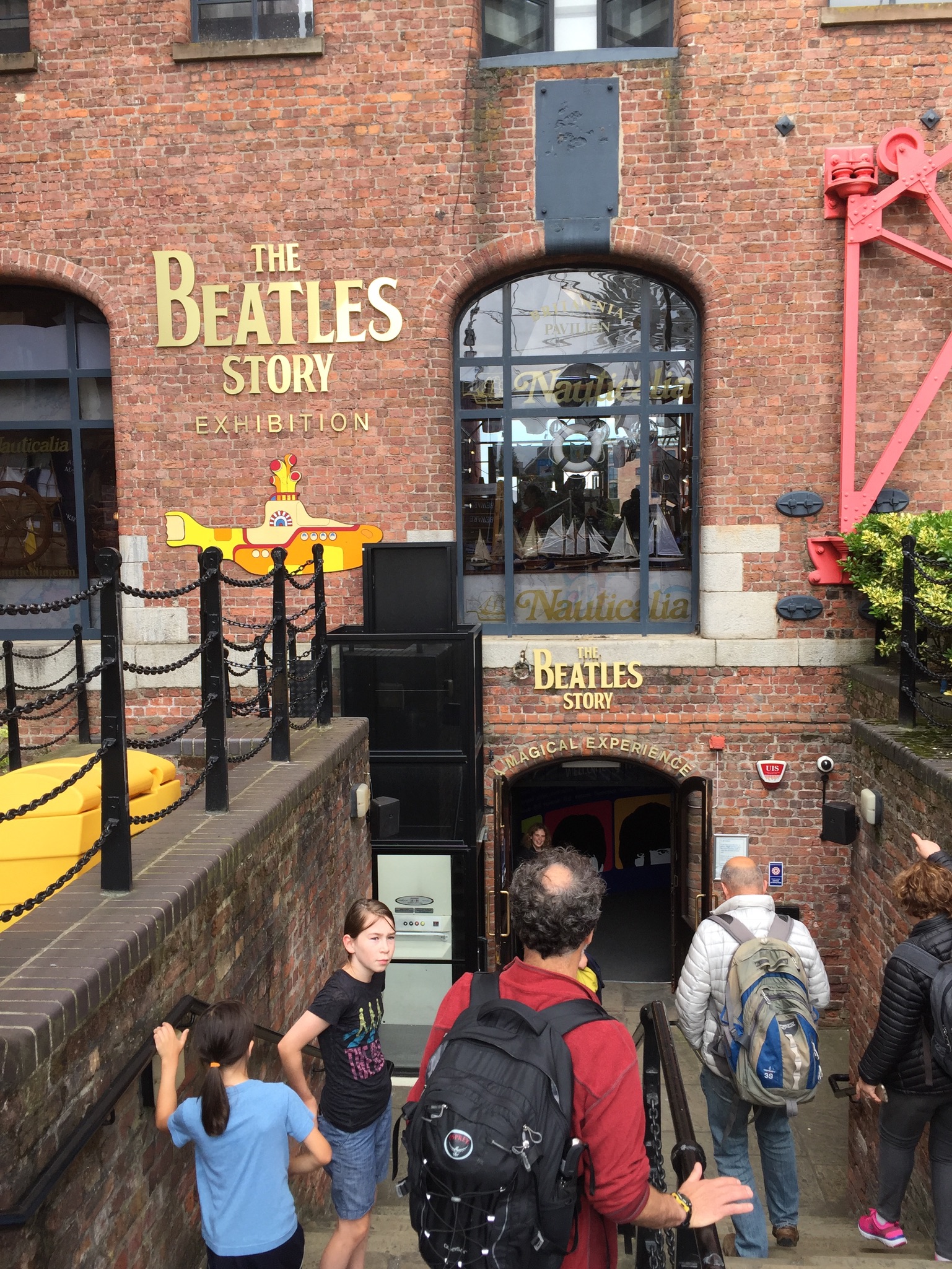 It’s not the leaving of Liverpool that grieves me
But the fact that we never went there in the first place!

So sayeth them bards of yore, Nerissa & Katryna Nields, yea rudely to their father who, as was mentioned previously, along with their mother, insisted on driving THREE HOURS OUT OF THE WAY merely to avoid a visit to Liverpool in the summer of 1985 when last our heroine came to the British Isles.

So it was not without some huge doses of irony that these words came out of my children’s mouths today as we approached Liverpool.

“How long do we have to stay here?”

“If we ever come back to England, can we NOT go to Liverpool?”

“How long do we have to stay here, again?”

And, most brutally, “Why are we even here?”

Tom: Because this really means a lot to Mom. Basically, today is pretty much about Mom.

Child: Pretty much this whole TRIP has been about Mom. What do you call yesterday? Abbey ROAD?

I should also say, first off, that we almost didn’t make it onto the train from Euston Station. Remember how I was marveling a few days ago about how great it was to travel ticketless? How I’d gotten an email confirmation and could use just that to board? Apparently, we could not. Picture all 3 of my family members yelling at me as we stood in line for boarding. All I had, at 5 minutes to the time the train left Euston Station from London to Liverpool, was a cold iPhone that wouldn’t budge from a message from Trainline that said, in pale grey letters, “This message not downloaded from the server”. In a panic, Tom said, “Let’s just buy the tickets again!” So we raced up to the kiosk back in the station where I tried to input my confirmation code. When that failed, he said, “Let’s just forget about this till tomorrow. We blew it.”

“Noooooooooo!” I shrieked, and I ran as fast as I could back to the platform. The good crew of the train stood baffled as I blubbered on about my cold iPhone and the cruelties of the internet, and they finally just waved us onboard. “Wow, does Mom have some specially convincing powers?” marveled the son. “No, just desperate,” I said. And “Acting!”

It wasn’t acting, though. I was really crying. And as I got on the train, I took a moment to think about all this. Why the blasted kerfuffle on my part? Do I really care about going to Liverpool? I almost don’t. It’s a bucket list thing, isn’t it? And what, after all, is a bucket list? Things we want to do before we kick it. But why? Is it just to redeem the feelings of that cranky 18-year-old who missed her boyfriend and hated being bossed around by her parents (just as my kids now hate being bossed around by me?) What will change if I go to Liverpool? Haven’t I gotten enough Beatles in my life? What do I even love about them? Their music. But I have all their music. It lives in me, and it always will, and the way to be in closer relationship to the music is to play it; not to go to Liverpool for Godssake. I am not going to discover their music in Liverpool. That’s already happened.  What can the Beatles Museum, or even the River Mersey show me that I don’t already know? Why am I spending £350, five hours on the train and an entire precious day of our London trip to be in this Northern boring industrial city for five hours of sightseeing? 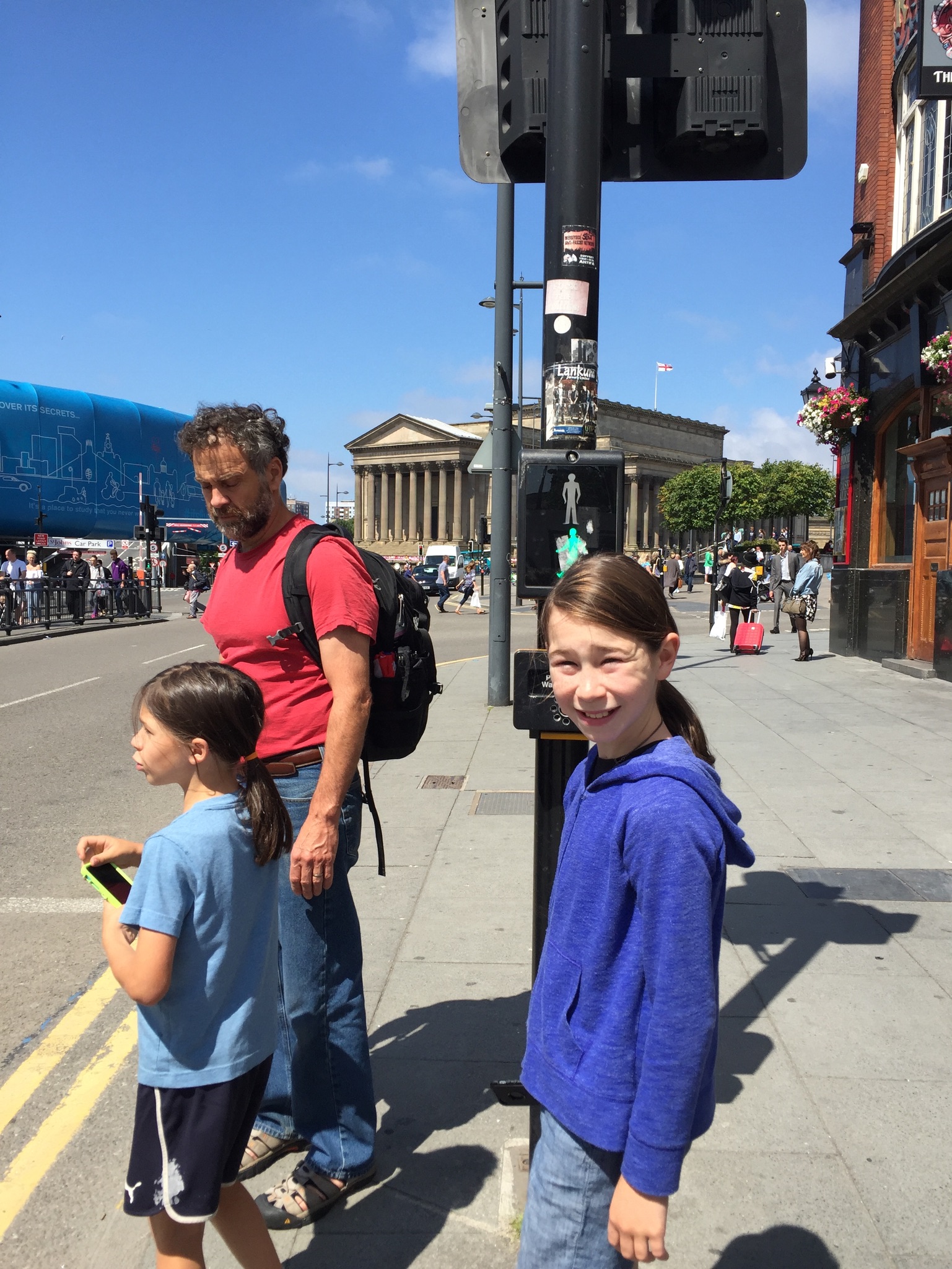 We did not see much of the English countryside from the train. But when we arrived in the Lime Street Station (“she’ll never walk down Lime Street any more”), I felt a jolt. We had done it! I was here and it could not be undone! We asked for help from the friendly ladies at the train station, and they kindly directed us. We walked down to the river and found the Beatles Story, the museum that houses all sorts of artifacts Beatles. And for the next two hours or so, my family wandered around from room to room learning about my favorite band. And the kids each got their own little device to listen and watch the tour. Give a kid a device, and all is well.

I did not learn very much I hadn’t known before. I did not have any epiphanies. But I did have a bit of a sense of being in a very crowded place of worship, sort of like being at Westminster Abbey: all these people knew the lyrics of “It’s All Too Much” as well as I did. All these people knew the exact date John and Paul first met (July 6 1957–word to my sister Abigail!) What I DID learn today is that the gig for which the Quarrymen were booked was in celebration of the 750th anniversary of the date King John gave the charter inviting people to start settling in Liverpool. WHOA!!!!!! And sitting to watch the films and images from the Beatles’s solo years moved me deeply–the George/Monty Python skit made me laugh, and the Lennon footage made me cry. 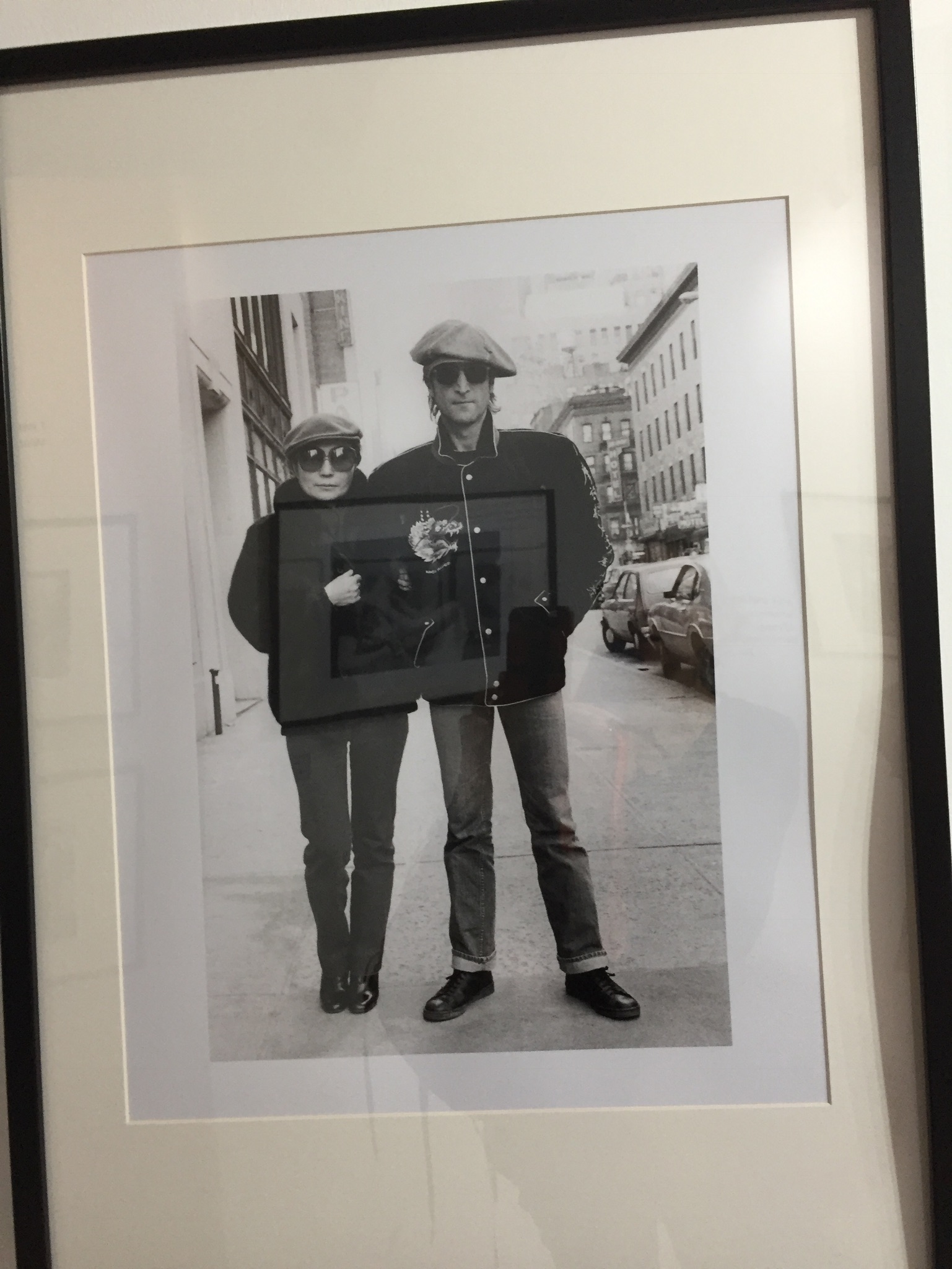 We left the museum and let the kids play wall ball against the Albert Docks, chatted with some friendly Liverpudlians, and worked our way around to the Slavery Museum. Once again, we managed to show up 15 minutes before closing, so I only got in for a bit. But I was shocked and impressed by what I saw. Much of Liverpool’s wealth in the 18th century came from the slave trade, and in fact, Liverpool was “Confederate” during the Civil War in the States–this according to an Englishman who worked at the museum. There was quite a bit of discussion about what it was like to be of African descent in England, and it peaked my curiosity more than anything in the Beatles museum had done. I want to know more about the Black experience in England. I also wonder what, if any, was the connection between what the Mersey Beat described as “The New Orleans of England” and its historical connection to the American South. Did John and Paul love the African American rock pioneers in part because of an historical connection in Liverpool? 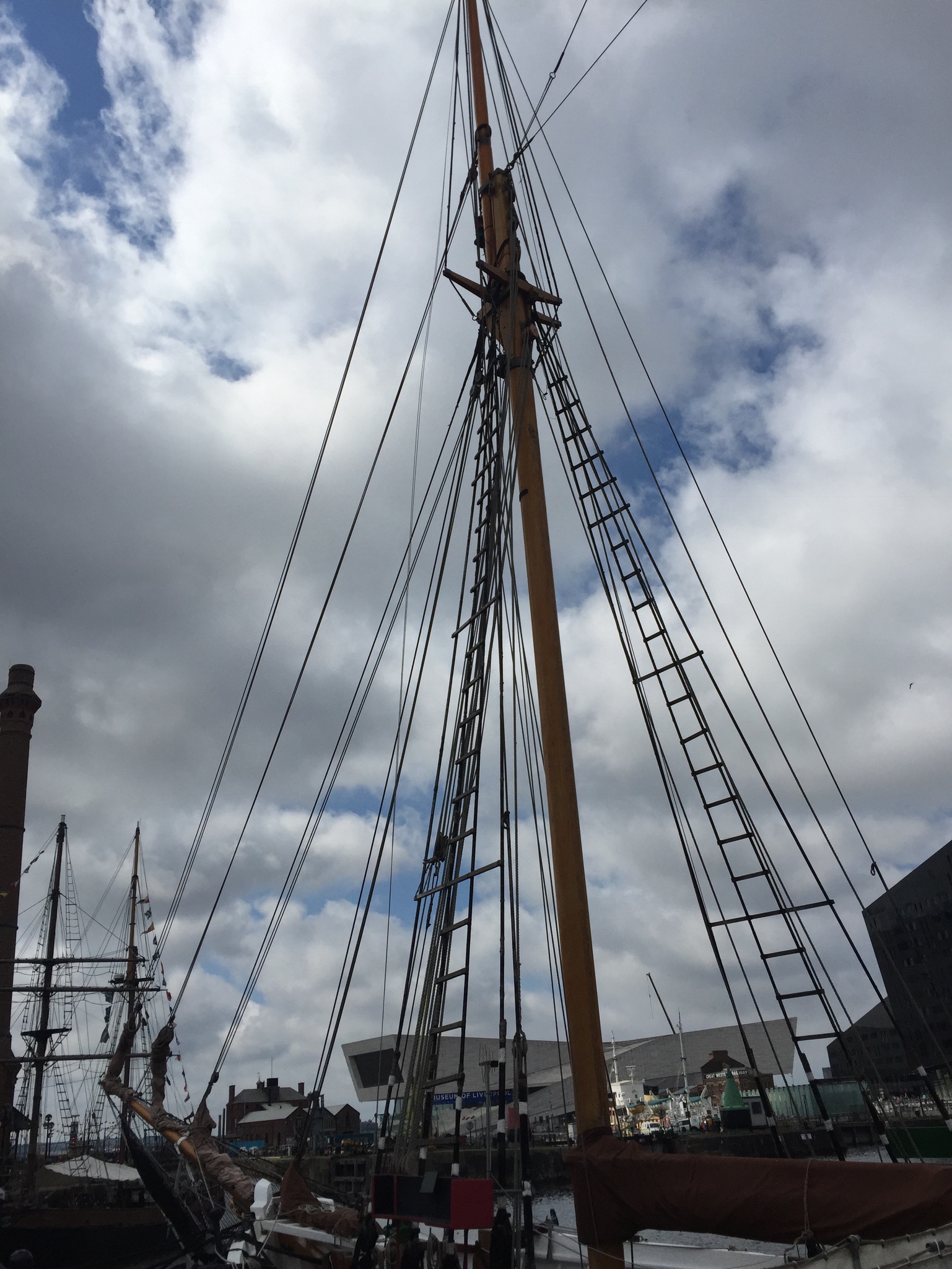 We’re on the train now, heading home to our flat in London. I have a bag full of Beatles memorabilia and two kids who are playing cards with a deck that has the street sign for Abbey Road printed on its back. There is some triumph in checking off a bucket list item, if only to fortify the illusion that we have some control over our lives. That’s not nothing. Would I have preferred this trip as an 18-year-old? Possibly, though I suspect what would have meant most to me would have been knowing my parents had noticed my passion and made a sacrifice in that direction. But that was not the way in which they sacrificed–they sacrificed plenty. Have we done similar for our kids? Not sure. We failed to take them to the Harry Potter tour (it was all sold out by the time we got our act together). We certainly dragged them to more museums than they wanted, though far fewer than we would have liked. But we did make sure to travel with their friends, and we loaded them up with sugar pretty much whenever they begged. (Not that that is any kind of sacrifice; merely laziness on our part.) But time can only tell what they will make of this trip; of what they will remember and what they won’t. I am hoping they feel their real inheritance: our presence. In the end, that’s the biggest gift.