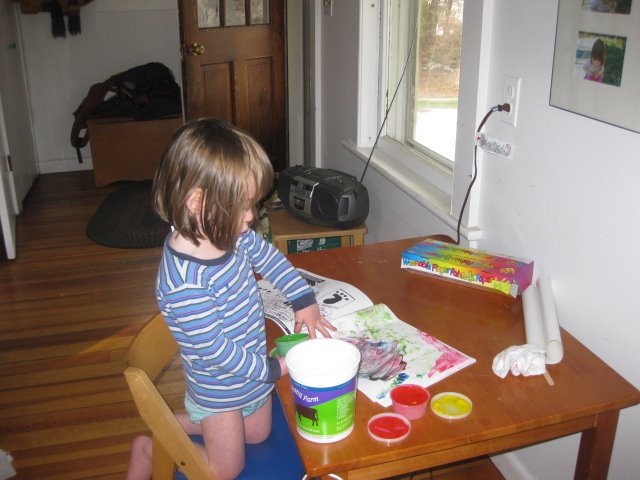 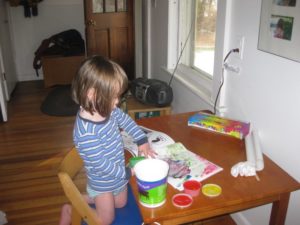 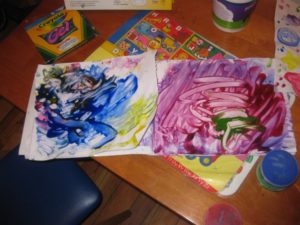 Someone told me today that EGO stands for Easing God Out. I love that. The way it works for me is this: I have a huge existential crisis (like losing my mind on account of having five careers and two small children on top of my own fairly needy high-maintenance self) and so I lean in on God.

Then God says something gentle like, “Just close your eyes and take some deep breaths. Relax. Let me rub your feet.” And like a deep-sea diver surfacing, a thought comes up that I know I can trust. The thought usually presents itself as simultaneously from deep within my own experience and also much more brilliant than anything I could have come up with on my own. It’s also usually simple and obvious, but it will require some sort of ungripping of my tight little fists. This ungripping causes momentary pain, followed by huge relief.

Then, after a few weeks of said relief, I begin to slide back into my old ways, whatever they are. Let’s just say, for the sake of example, maybe perhaps I am just a little bit of a workaholic and what I’ve just ungripped is some aspect of one of my careers. Again, merely for the sake of argument, let’s say I’ve noticed that the biggest casualty of my tight grip is my relationship with my two and a half year old daughter Lila. Perhaps she is furious with me because I went away to New York for two nights and didn’t come home with stories of meeting Dan Zanes. In fact, when she emerges from her bad mood long enough to ask me to tell her a story about Dan Zanes, I responded by saying, “Actually, Mommy needs to post to her blog because she made a commitment to do so every day for the month of March.”

Of course, none of this is exactly my fault, and for the record, I didn’t really tell her I had to post to my blog. What I really said was that I needed a nap, which was true. Moreover, I firmly believe that it’s a gift to my daughter to have a mother who loves her work and who feels whole and together because of it. But the piece I need to pay attention to has to do with something that subtle voice says to me when I ask for help. It says, “You don’t have to be a supermom. You don’t have to be the kind of mom who makes macaroni collages with rubber cement, or the kind of mom who makes her own play-dough and dyes it with natural pigments made from wild berries that you scavenged with your child on a field trip and crushed under your bare feet once home. You don’t have to be the kind of mom who sits on the floor for hours with your child making up stories about flying to Seattle and animating her stuffed animals with different foreign accents. You just have to find something you like to do and include her. See where your interests meet. Treat her like you’d treat anyone you love. Pay attention to her.”

It’s worked really well for me in the past to heed this voice. Even when the only thing I can think of to do is sit in front of the TV and watch “Elmo’s World,” there’s a big difference between sitting with her and paying attention to the show, letting myself enjoy it and laughing at the jokes, or making comments about Mr. Noodle, or singing along to the songs Elmo teaches her versus sitting her in front of the TV while I take off to the kitchen to tidy it, make a phone call, check my email, cook a meal. Not that I shouldn’t be able to do some of that—I must be allowed to do some of that or I will once again lose what’s left of my mind. But just as toddlers learn independence by venturing further and further away from the parent only to return to touch the parent’s knee every once in awhile, so that both know there’s still a bond, so must I come back to Lila and reconnect every half hour or so (at the least) to let her know I am still here with her. My lesson as a parent, over and over again, seems to be this: forgo achievement in favor of presence. No matter what the arena, the achievement is never as worthy as the sheer wordless experience of togetherness, bare attention.

Along these lines, I spent far too long today on the phone talking to various admissions people about various preschools. I had promised Lila some drawing time, and I blew right over it conversing with a financial aide administrator about whether or not we qualified. (I have such mixed feelings about this subject, by the way. We are right on the line, and I was raised to believe that one paid full price for education if at all possible. My parents didn’t go out for dinner for ten years in order to send their three daughters to private school. My first instinct is to go to the school with the lowest tuition, which also happens to be a co-op. I like the idea of paying in part with my time, elbow grease, and in my case, voice and guitar and my ability to impart a song to a group of children. But I also, like all parents, want the very best for my child, and maybe I am being unnecessarily proud about the financial aid.)

At any rate, I don’t have any clear answers about the school decision right now, nor did I this afternoon as the clock was ticking and my designated drawing time slipped away. As my friend Karen says, “you are in the information-gathering stage and that means you still need to gather information.”

But when I get into this mode, this information-gathering mode, when I have a goal, I am like a dog with a bone, worrying it, tossing it around, chasing my tail, growling at anyone who comes near me with even the wisp of a threat that they might take it away. I am easing God out, forgetting that God doesn’t like it when my full attention is on my own little knots and problems. God seems to like it better when I hand the bone over and trust God that the marrow will be given me in a much less painless way than my solution, which is to absolutely gnaw the bone to shreds.

Lila is too young to notice that I promised her we’d draw together and then reneged. She doesn’t hold grudges. Even yesterday when she wouldn’t talk to me for a good forty-five minutes, eventually she softened and asked me again about Dan Zanes. This time, I was able to tell her all about the Del Fuegos, how he had his daughter Anna and came to want to make a different kind of music that whole families could enjoy together. Then we sat down and made fingerpaintings. By evening, she wanted me to be the one to put her in her crib.

Tonight I was getting ready for my writing group. The house was in its usual state of cataclysmic disrepair, with the added bonus of fingerpainting materials underfoot, and I was fortunate to have the help of both Tom and our wonderful babysitter. My job was merely to get Johnny down. I lay with him, breastfeeding, my mind on my day: the school decision, the bills I was paying, the email I sent out about the next writing session here at my house, the fact that I forgot to buy enough protein at the co-op today and will therefore have to schedule another trip to a grocery store this week, the discussion questions for my Agape meal for members of our church this Saturday, the video to “Pelican Fish” that I am trying to make, the surly knot that is the current version of my novel, The Big Idea, the concern I have over Lila’s potty training or lack thereof. The usual swirl, or as Jack Kornfield would say, my typical top ten hit parade. Johnny started making his tired noises, which sound like a car trying to start when the battery is dying: ‘UH ah, UH ah, UH ah, UH.” He also rubbed his eyes. I carefully picked him up, still attached to my breast and lay him in his crib. He looked up at me, his eyes half closed and grinned. He wiggled all over, holding eye contact and beaming. I was about to leave him there and take off to check my email to see if any pearls of wisdom or mind-blowing answers to the questions that had been swirling through my head would be waiting for me in my in-box, when I thought, “Which are you going to remember in ten years: any of these mundane concerns or the look on your son’s face as he gazes up at you adoringly?”

So I stopped and I stayed and I grinned right back and I waited until he moved his attention from my face to the chord of his stuffed Clementine Bunny. Clementine Bunny is actually two bunnies: a big mommy bunny attached by a pull-chord to a little baby bunny. When you pull the baby bunny away from the big bunny, a music box plays “Oh my darling Clementine, and the baby bunny pulls in, inch by inch, back to his mom until he’s snug up against her and the song stops.

This image has nothing to do with my post, but the cat insisted I needed to make it the featured image, and it’s a lot bigger than I am. If this is your cat, and you are mad at me for taking its picture, I will come to your house with cookies as an apology.

Stacey from Hertfordshire is desperate to be crowned star baker, which is why she is sitting on the floor in front of her oven holding its door shut with her…