Windows Onto Each Other’s Lives 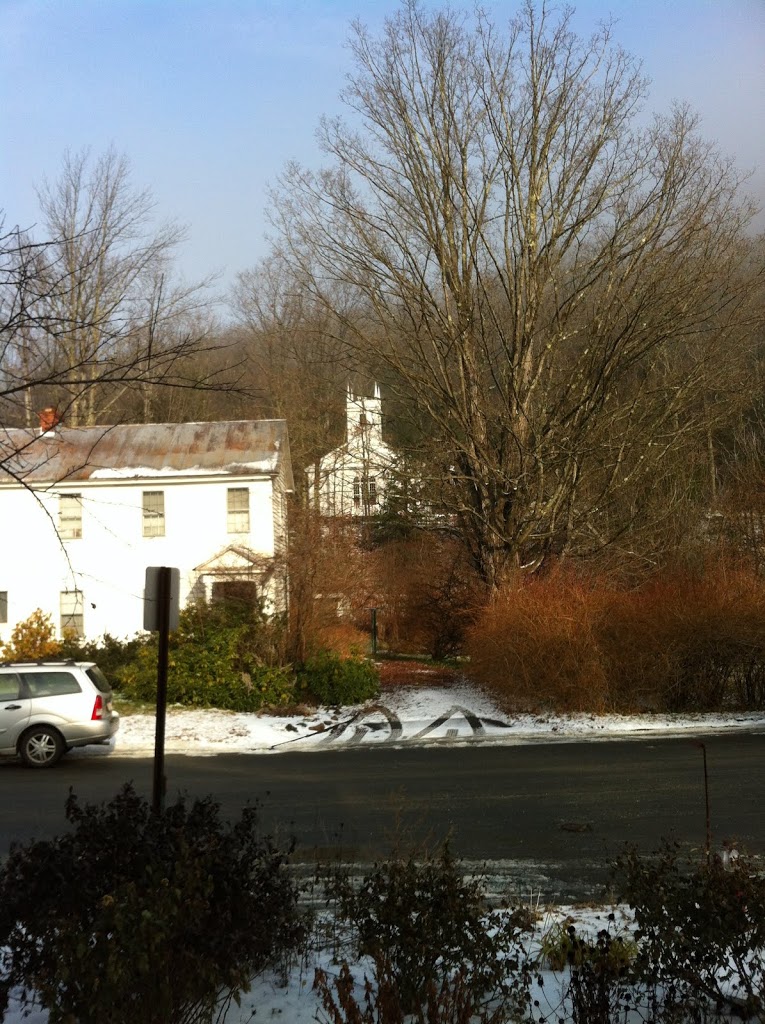 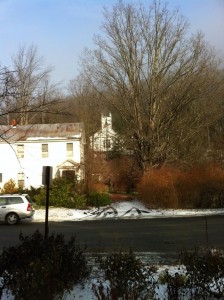 View of the new church from the Parish House

Last Sunday, the church that burned to the ground on Jan 17, 2010, rose from the ash and opened its doors to its faithful congregation: we, from many different backgrounds and faiths, who have come to know this little sanctuary in the hills as home. Since the fire, we’ve been worshiping in the Parish House, a quirky former UU church-turned-Ladies-Auxiliary-Club down the hill which houses a kitchen, bathroom, small office for our minister, Stephen Philbrick, and medium-sized, modest front room where–up until the burning–was the place our children held “kids church.” When this became our temporary home, we arranged chairs in rows; another church had donated a shabby but perfectly serviceable pulpit; still other churches had donated hymnals, and Penny Schultz, our miraculous music director, had printed up supplements. Really, we had everything we needed, even a baby grand piano, and a view of the spot where the church had once been in a window behind the pulpit, the spot in most churches where a cross or crucifix would be hanging. As the months went by, we congregants got to watch the “new old church” being rebuilt, growing taller and more familiar with each passing Sunday. We’d worked hard as a congregation to figure out what we wanted, what we needed, what made the most sense. We’d agreed that the new church should look as much as possible like the old church on the outside. We’d agreed that the new church should have a bathroom. (The new church has two. In the old church, we stepped out the back door with our baggies of toilet paper and squatted.) We agreed that the minister didn’t need a raised dias. We agreed that the windows–those huge, abundant windows out of which one could stare, half-listening to the sermon, half watching the snow, or new leaves, or atomic blue sky–needed to be the same.

The morning of Dec. 2, we gathered at the Parish House and practiced for the last time our three part a cappella version of “Amazing Grace.” Jim brought his baritone sax, Kim her trumpet, Chris Haynes his accordion, Colin banged a tambourine and I strummed along as we all sang “When the Saints” and marched up the hill to the new old church. We paused on the threshold and Penny led us in “Amazing Grace.” And then we entered for the first time, the place we had thought we’d lost forever. The place was packed, with the walls lined with folks who couldn’t find seats. 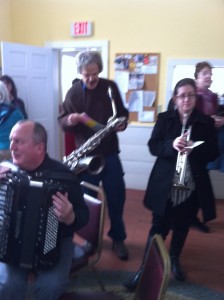 Jim, Kim and Chris rehearsing in the Parish House 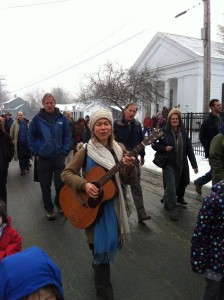 Marching up to the new old church; Parish House in background

The day before, I’d been in another packed church, this one in Washington DC, at St. Albans Chapel, on the grounds of the National Cathedral. My childhood friend Lavinia Lemon Pitzer had died in mid November of pneumonia, incurable because of an auto-immune disorder only discovered three days before her death. She’d left behind three teen-aged children, her husband Andy, her parents and step-parents, her sister, brother-in-law, nephews, and a league of stunned and striken friends. Vinnie was warm, engaged, thoughtful, loving, funny, sharp and now gone. My parents knew her parents, and so the three of us attended together. I had flown down that morning, rising at 4:20am to catch my plane. We arrived at the funeral fifteen minutes early to find that there was no room left in the chapel, but we could stand in the narthex and listen. I had a moment of frustration–I flew all this way to stand and listen?– immediately replaced by the thought, “But whose place would I have taken if I’d arrived fifteen minutes earlier?” I had said maybe five words to Vinnie since 1981 when she brought me to Idaho to attend her beloved Van Der Meer’s tennis camp in Sun Valley. Here, because Vinnie was 15 and I was only 14, I was separated from the one person I knew and stuck in the “little girl’s” dorm while Vinnie went off with the big girls. Fortunately, I’d brought my guitar and two sheets of legal paper with lyrics and chords to two Bob Dylan songs, written out for me by my father. I’d also brought my Beatles songbook. And even though I’d loved the tennis, what I remember most is playing my guitar for the “little girls” who were aged 9-13, finding my place as their troubadour. And so finding myself.

I ran into Vinnie a few times with her family in the Adirondacks, but we had little to say to each other. I’d always thought we lived in different worlds. At the funeral, packed so closely I could see the face lift scars on the women in their tailored suits and perfectly coiffed blond bobs, I was struck by the difference. This was North West Washington, a slice of the Chevy Chase club lifestyle. I had fled this culture right around the time I went to Idaho, spending that summer’s early mornings lying on my back in my bed, realizing I had a decision to make. I could try to play the game Vinnie played so beautifully: get along with my classmates who seemed to have a play book I never received, who went away for mysterious ski weekends, who went to dance classes at Miss Shippen’s, who knew instinctively when to pull up their knee socks and when to let them bunch down over their ankles. I could try to get my hair to behave, to like the boy I was supposed to be “going with,” to smoke and drink at the scantily chaperoned parties. But I had another notion: maybe I was not one of them. Maybe I was never going to fit in. Maybe this insane obsession I had with music, especially the music of the Beatles and Bob Dylan was a calling and not just a curiosity. Maybe I was an artist, meant to be a little apart. Maybe I had to find my own drum to march to.

Maybe so, but I am tired of this story, this explanation to myself of my difficult school-aged years. Do others have to be wrong in order for me to be right? Why couldn’t I have reached across that difference when I saw Vinnie in the Adirondacks? Why couldn’t I have made more of an effort to see how we were the same? Like me, she loved her children, her husband, her parents, her choices. Why couldn’t I celebrate that with her? Why see the chasm? Is there even a chasm? If I lived in a culture where everyone got a facelift at 50, I’d line up for mine. I just happen to live in Western Massachusetts where we judge each other by our carbon footprint rather than our wattles.

Back home in Massachusetts by 11pm, Bradley International Airport seemed shabby compared to what is now called “Reagan” in Crystal City, but which I stubbornly continue to call “National Airport.” There was a part of me that wondered if the trip was worth it. Speaking of carbon footprint, I’d spent a lot of fossil fuel and cash making the trip to DC in one day, and I’d spent a lot of emotional capital, not to mention life force to be at the funeral of someone I hadn’t been close to since the early Reagan era. I made my way home gingerly over the black ice on I-91, hung over each of my sleeping children and breathed in the scent of their bedtime skin; then crawled into bed next to my husband. And then, the next morning, at the new old church: yes, I cried as I entered, cried as I took in the sight of Steve standing in back of the same shabby borrowed pulpit (is a new one being made?) and in front of another window in place of cross or crucifix. This window shows the sky, the bare branches of late fall. And as I sat in the place we always chose at the old church—the front pew to the preacher’s left—it hit me. This was not the old church. The quilt Annie Kner sewed, our healing quilt, was gone. The place I’d gotten married seven years ago—unrecognizable. The very architecture of this new church was profoundly different on the inside. Lovely, yes. But not the same. We’d lost the old church. I hadn’t realized it as it was rising up before us from the distance of the Parish House window. I got to think, “The church burned down, but see, we’re getting it back! There it goes, good as new!” This was good; this was new. But I saw for the first time that something precious to me was lost forever. Now, face to face, there was no denying the loss. 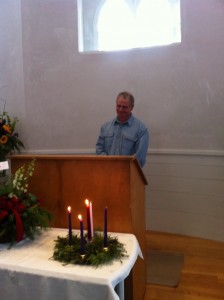 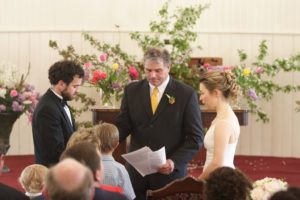 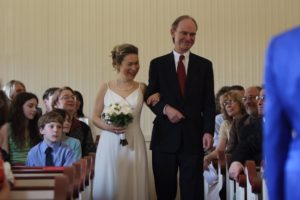 The interior of the old church 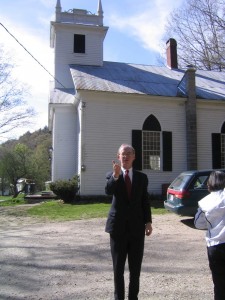 My father in front of the old church

So I cried a little more, this time for what was passed. And I realized why I’d gone to Washington for Vinnie’s funeral. There is a value is putting your face right up to death, destruction, loss. Some of us don’t get it otherwise; we just continue to live in our delusions that this one exquisite moment, this one exquisite child, this one exquisite note can be replicated some time in the future, so no need to look up from our tiny screens now. I won’t get another chance to catch up with Vinnie in the Adirondacks. Way more importantly, three kids have lost their mother. Our church—the church we knew—is completely transformed, transfigured, glowing white as Christ appeared to his disciples. And we have to let ourselves be wrung dry by life, by grief, by what is happening now and what is too precious to lose as it’s passing by. 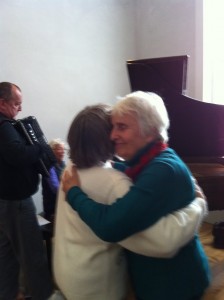 Dancing for joy in the new old church 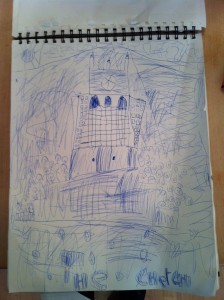 Elle’s drawing during our first service in the new church

I haven’t written on this page since December took me down the dark rabbit hole of holiday prep, end-of-year festivities, and of course the terrible news. I have written many…