God Is in the Numbers:Republican Math and Self-Disclosure 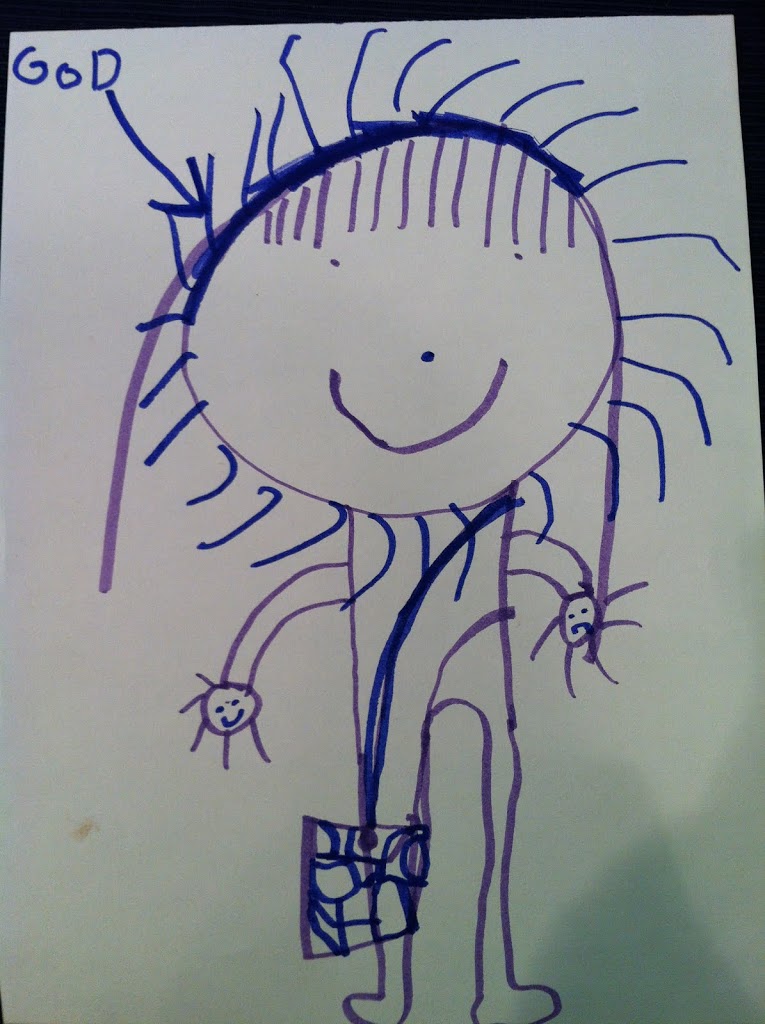 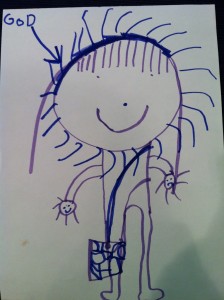 I feel for the Republicans. It’s no fun to confront reality after years of believing one’s own math. But of course, I am not a Republican, and this time around, the numbers, AKA the Truth, were on my/our side. I had been passionately, nail-bitingly watching Nate Silver‘s polling data and analysis. Every time Gallup would say Romney was up three points, my friend Liz would say, “Check with Nate Silver. When he gets worried, I’ll get worried.” For weeks before Nov. 6, I’d run into parents at pickup and say, “I’m just so scared!” “Me too!” and we’d grimace at each other and hurry off to collect our offspring. Elle voted in an election at her school and refused to tell me for whom she’d cast her ballot. “It’s a secret ballot,” she said firmly. Although that same day she said, “Mama, what’s a saint?” I said, “Hmmm. A saint is someone who is very very good, very close to God and who takes care of poor people.” “Oh,” she nodded. “Like Barack Obama.” “Um, no, not exactly,” I said, but I did take it as evidence of how she voted.

I am finally home again after a wonderful weekend away in the DC area. Katryna and I did a benefit for Revels at which three of our lifelong music teachers were in attendance. 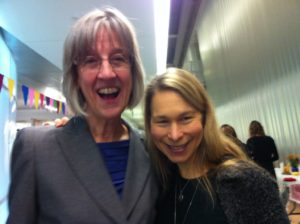 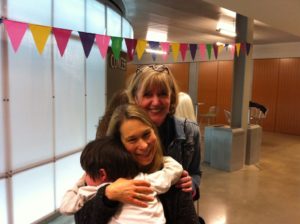 I also brought my kids who had a fabulous time visiting with their grandparents. The weather was wonderful; coats were left unpacked in the suitcase. My mother and I talked books (Jeffrey Eugenides’ The Marriage Plot) and writing (we are each deep in the midst of our novels), and my father squired the kids around on his shoulders even though he was getting over a cold. On Sunday night, when I told Jay we were going to be leaving the next day, he sat at the top of the stairs and very quietly wept. I knew how he felt.There was a sweetness to this landing spot at my parents, where, though I was woefully low on my normal self-care regimes, I was tunneling my vision into watching the Republicans try to figure out why they lost, and soon I’d have to go back to business as usual (Suzuki, cooking, exercise, teaching, etc.). Call it political rubbernecking, but I really am obsessed. When I wasn’t reading the New York Times or the Huffington Post, I was talking to my parents and anyone who would listen to me about this particular delusion.

I am not a numbers person. I never have been. I get easily confused, and I like a world in which the margins are nice and soft. Numbers don’t have this advantage. Numbers are crisp and permanent. So I have to take some extraordinary measures to be clear on numbers instead of being vague, which I much prefer. I write down everything I buy, and I write down every penny I earn. As a self-employed person, I keep spreadsheets on all my income and expenses. This is an ongoing process, and I have to keep refining, keep finding my errors, keep working to come up with a clearer, better system. I’ve come (somewhat reluctantly) to see it as a spiritual discipline. I am not just responsible for myself; these numbers have ramifications for my kids and my husband, and how I give to the world. And yet, now that I am working with numbers every day, keeping track of my income and expenses, seeing where I need to work harder, and just as importantly, where I can work less (so as to be available to my kids, my husband, my writing, my spiritual life), I have a real respect for numbers. I have come to love them. “God is in the numbers,” says a friend of mine. I get this. This is a side of God I know–the one who loves me no matter what, yes, but who can’t save me or my friends from death, cancer, hurricanes or bankruptcy. This is the God called Reality.

We left Northern Virginia in our ridiculous big-ass black Ford mega vehicle (I let the kids choose–oops) and drove to BWI where, I knew from an email from Southwest Airlines, our flight had been delayed. We went through baggage drop off and were told to get our boarding passes at the gate. We had a lovely chat with a family from India relocated to Albany and I tried to get them to come to our show this Saturday in Cohoes. We made it to the gate a half hour before take off, the kids scooting on their little Melissa & Doug Trunkees. And there we discovered that SW had overbooked our flight, boarded it at the old time and that there were no more flights to Hartford until the next morning. “But,” I sputtered. “I am in a unique employment situation! No one can do my job tomorrow! I need to get home!” [I was supposed to teach my Parent Guitar Class at 10am Tuesday.] Moreover, I had no car seat anymore since it was in the belly of the plane bound to Hartford–without us–along with my guitar and our suitcase, which incidentally had our coats and basically everything else except the kids’ Trunkees which housed some stuffed animals, cars and drawing materials.

So I rented a Prius with car seats and we started to drive back to Massachusetts at 4pm. Like the Republicans, I had not exactly done the math, but somewhere in southern NJ around 7:30pm I realized we were going to hit the Hartford Airport around midnight, if there were no traffic in NYC, and I’d have to, at that point, get sleeping kids from the rental into a van to take to the terminal to collect a big suitcase, guitar and car seat, then another van to our parking lot, put everything plus kids into our Jetta and drive another 45 minutes home. So I called my aunt and uncle in Fairfield and we crashed there, playing with their little red dog and sleeping in a heap on their living room floor. Fairfield was hit hard by Superstorm Sandy; their house had had almost 3 feet of water and sewage in it. They were finally getting back to normal, but they were tired. These superstorms cut a swath through New York and New Jersey that was easily predicted by scientists who study climate change. God is in the numbers, and God is in the science we use to figure out why the weather is becoming so volatile and why the demographics are becoming favorable to the Democrats. Dear Republicans: please wake up. Please come back from your 1950s-era fairy land, put the ball back on the field and play with us. We have real problems to solve, and it’s going to take all of us to solve them.

God has no other hands but ours. This is where the soft margins come in. Katryna’s sister-in-law reported that after her home in Red Hook was flooded, friends, family, volunteers and complete strangers showed up to help bail her and her family out. The woman at Budget gave me 50% off my rental car and somehow magicked the tolls into the payment, though there was no EZ Pass transducer in sight. (These may show up on my credit card in the future, however. But for the moment, this is my own version of Republican Math). My aunt miraculously lives where she lives, and we were able to find a landing spot.

The last day we were in Virginia, I noticed the picture of God on the floor in my parents’ living room. “What is this?” I asked Elle picking it up. “God,” she said. We’d gone to church and heard a rousing and inspired sermon on stewardship by our friend Aaron Fulp-Eickstaedt, and because Elle’s God has a purse, I wondered if she had been somehow able to listen from her Sunday School room. But God is not carrying a purse, she explained. That bag is God’s bag of tools. And the headband and long hair is to show that God is both a man and a woman. God’s face is the sun (“the actual sun,” she emphasized.)

I love the hands most of all. The Lord giveth, and the Lord taketh away–perhaps. Steve Philbrick says, “In Isaiah it says ‘I, God, make peace and create evil.’ [Elle] shows why. (Or: why you want to be sitting on the right-hand of God…)” There is something comforting about this view of the Divine, too, in its own way: it makes pretty clear our powerlessness.

But what I really believe is that God Him/Herself is happy and sad; God shares with us (if we can listen) God’s own grief about our cancer, our election disappointments, our bankruptcy, our missed flights, our climate crisis. And God extends a hand to us no matter what our mood, or God’s mood. And this morning, I opened an email from Franciscan Richard Rohr. Here’s what he had to say about the hands of the Risen Christ, which I thought was apropos:

Fullness in a person cannot permit love because there are no openings, no handles, no give-and-take, and no deep hunger. It is like trying to attach two inflated balloons to one another. Human vulnerability gives the soul an immense head start on its travels—maybe the only start for any true spiritual journey. Thus the Risen Christ starts us off by revealing the human wounds of God, God’s total solidarity with human suffering. He starts with self-disclosure from the divine side, which ideally leads to self-disclosure from our side. The Bible first opened up for me in the 1960s when the II Vatican Council said that divine revelation was not God disclosing ideas about God, but actually God disclosing “himself” (sic). Quickly Scripture, and religion itself, became not mere doctrines or moralisms for me, but lovemaking, an actual mutual exchange of being and intimacy.

Excerpted from Immortal Diamond: The Search for Our True Self, p. 167

It’s been a bad month for horndogs. We’ve had our share of really sad, scary, too-close-to home cases where someone’s sex drive caused a lot of hurt in our community….