Why We Are Buidling a New Kitchen 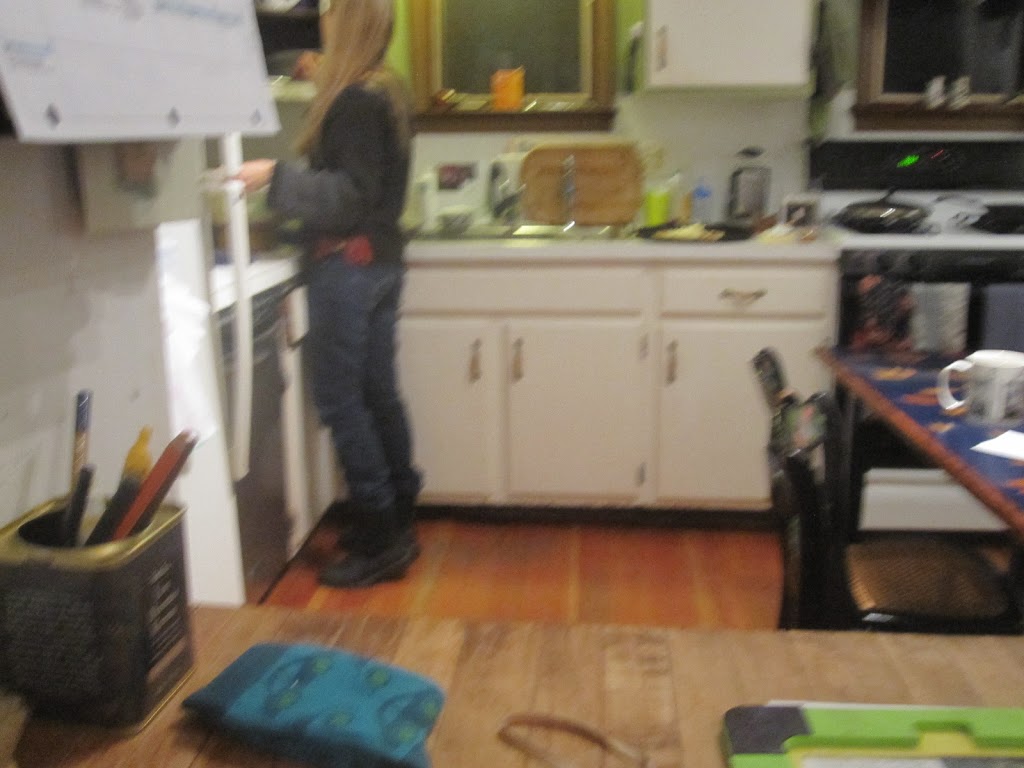 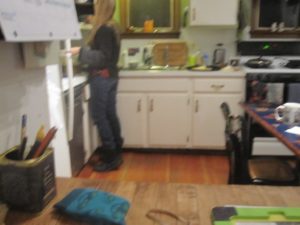 Photo of the author and our kitchen by author’s four-year-old.

I really think all my problems would be solved if I could a. go back on caffeine and b. buy a new iPad. Instead, I am going to think about this poem by Josephine Johnson.

Then may it be said of you:
Behold, he had done one thing well,
And he knows whereof he speaks, and he means what he has said,
And we may trust him.
This is sufficient for a life.
-Josephine Johnson

One of the writers in my Monday group brought us this poem. It came as a gift on a day when we’d gotten two pieces of so-called bad news.

The first piece of bad news was that Elle had just lost her second lottery in a month to the other charter school we’d applied to. The first school we will not be attending is the Hilltown Charter school, co-founded by our beloved friend Penny Schultz, who teaches music and movement there. Penny is our music director at our church, and certainly one of my Knights of the Jedi Round Table (as my friend and mentor Pam Slim would say). Hilltown Charter is a jewel of creativity, inventiveness and just plain love. I cried when our number came in at 64 and I knew it wasn’t going to happen for us.

The second school is the Chinese Immersion School in Hadley, about twenty minutes away from here. Although I don’t think I would have sought out an immersion school, many friends encouraged us to apply because of the strong MCAS scores and parent cohort. I wanted to apply because all the kids I knew who go there love it. We drew #111.

On the same day, we got word from one of the two contractors who were bidding on our kitchen, coming in at a number that would make the figure in our savings account cower and wither and beg for mercy.

The next day we got the second bid. It was higher. Knowing that one needs to add 20% to whatever the estimate might be, Tom and I picked up the plans, scouring them for areas to decrease, appliances to recycle, tile choices to reconsider. Maybe we could get rid of a few windows. Or live without an oven and instead build a smoke pit in the center of our kitchen.

In fact, we are reconsidering the whole project. Do we really need a new kitchen? How can I justify this anyway, when down the street folks line up for a free meal at the shelter? And now that my daughter won’t have a second language (Mandarin at that) in her back pocket when it’s time to apply for college, shouldn’t I put all the money in a college fund?

Then it occurred to me to learn Spanish. I have always wanted to learn Spanish! I speak and read passable French (well, passable to my sister who speaks about the same level of French. Katryna, that is. Abigail is fluent.) I could learn Spanish, send my kids to a Spanish after-school program, teach Spanish songs at their local public school where there are lots of native Spanish speakers and somehow shoehorn a kind of Immersion into my kids. Take that, charter school! Immersion, Nerissa-style.

Which might be what I suspect this poem is suggesting I don’t do. I am queen of scattering my seeds and trying to build gilt shacks for them all. Do one thing well? Too hard. I’d much rather do twenty things kind of ok. Less boring, or so I think, anyway.

Speaking of boring, I read the reviews of Amy Chua’s book with a kind of morbid fascination. For those who missed the news cycle of mid January, Amy Chua, AKA Tiger Mom wrote a memoir (note: NOT a How To) on her parenting style, which is somewhat if not completely Pavlovian and includes threatening her children with burning their dollhouses if they don’t get their piano pieces error free in their daily three hours of practice. Of course, like the rest of America, I would not raise my kids that way. But sometimes I think that’s only because none of my friends would let me. There is definitely a part of me that wants to raise my kids the way (some people) raise prize winning show dogs. And Amy Chua said one thing in the Wall Street Journal excerpt that I keep mulling over: “Nothing is fun until you’re good at it.”

Is this true? My kids certainly have a blast banging on our piano and hurling their adorable bodies around the living room to the soundtrack of Peter Pan. Their movements certainly resemble interpretive dance of a certain kind, but are they “good” at it in the sense of mastering skills? Probably not. And yet, I do remember when I was learning to play the guitar I was often so frustrated by my limits that I would give up after a few moments of miserable strumming to do something else. But, as I was self taught, I must have kept coming back for some reason. It wasn’t fun not to be good at guitar. And I had what Ellen Weiner calls “the rage to master,” which I presume Amy Chua’s kids had
too, since at least one of them has played Carnegie Hall. But I only had the rage to master a certain level of guitar. I wanted to build gilt houses for a bunch of songs, including ones I would write myself. I did not make guitar the foundation for my barn. I did not build a guitar barn.

The lessons of this week keep circling back to this: I am building a kitchen partly because it’s fun and indulgent and I love pretty tiles and BlueStar ranges; but mostly because I love to cook for friends and family, and like most families, we live in the kitchen more than any other room. The kitchen is our foundation, it is where we meet in the (sometimes cranky, sometimes luminous) bleary morning; where I write most of the day (my desk is in the kitchen now); where we gather at the day’s end to thank God for our food, health, friends, family and say what was good about our day, what was bad. It’s where Tom and I meet after the kids are in bed for a cup of mint tea and a recapping of the day’s events. I clean the counters before turning the lights off–one of the last chores before sleep. And we hold retreats in our house where the kitchen is a whirl of flavors, laughter and activity. Songwriters write in the large bathroom cum recycling center which will turn into a pantry. Weekly writers know where the tea is stashed, how to get hot water quickly. This is a communal house, not just mine but belonging to the muses of the writers who write here.

When I was in college, I hung out at a vegetarian restaurant called Claire’s for hours with my fat volumes of Shakespeare, thin Sam Shepard paperbacks and scores of Bach, and my friends from Tangled Up in Blue. One night, on a napkin, I drew my dream home: a place in western MA with three buildings. A recording studio on the left and a space to worship on the right. In the center was a house with a gigantic kitchen where we would all gather to eat and recap the day. I imagined all my friends from college coming and going, making music, sharing stories of their adventures. I imagined myself living here after my touring days were over. I’d take the cue from Voltaire: “Il faut cultiver notre jardin.”

I guess I am there now. And so we are joyfully sending Elle to the local public school a couple of blocks away from here, and I hope to give as much as I will get to my community. I will teach our songs, and I will learn the new ones from the kids she goes to school with. Meanwhile, I will clean house, reinforce my barns, cook some fabulous vegetarian meals on my BlueStar stove and let go. Return.

The Artist’s Way and Hiring a New God