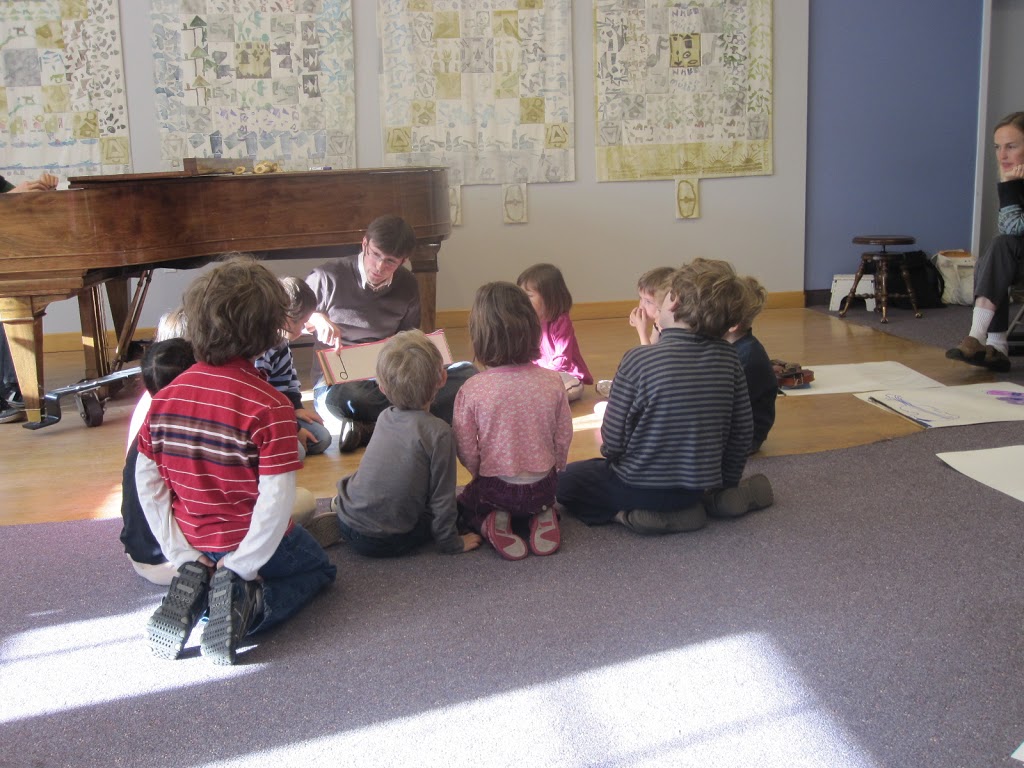 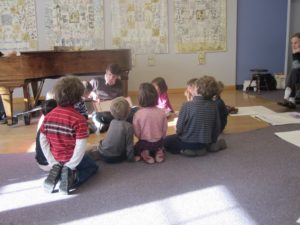 Today in yoga class, our teacher Amy Reed, talked about the dance between Shiva (our bare, pure awareness) and Shakti (the ways in which we harness our awareness to engage with the world.) The two are always at play with one another, going back and forth. Some times we are more introverted–more Shiva–observing the world as it goes by, just noticing, not getting all hooked up in the story. And at other times, we are plunging in, seeing where the holes are that only we can fill. “Blessed are those that play, for theirs is the kingdom of heaven,” wrote Emily Dickinson. As a musician, I think about Shiva and Shakti all the time. Musicians need, primarily, to be listeners before they ever strike, sing, pluck or blow a note. We need to observe what the others are playing, or even what the silence is compelling us to. And then, at just the right moment, we engage. We come in. We join the symphony, the chorus, the jam, with the part that is ours and only ours to share.

All of which makes me think about my new career as Suzuki Mom. If a year ago you had said, “Hey, Nerissa. What is your biggest parenting nightmare?” I would have said: any situation that would put me in a position to force my daughter to do something on a daily basis. Make that one thing “music” and we move from nightmare to horror show. How could forcing a child to practice for a half hour a day breed anything other than resentment? I would resent her for not wanting to practice, and she would resent me for…well, for being me. Queen of the Daily Practice (be it unloading the dishwasher, writing a song per day, running, yoga, making gratitude lists-whatever if might be, you can be sure I will be compulsive about it. This is not so bad when it’s just me we’re dealing with, but I feared exposing someone I loved, especially one of my children to this facet of myself.) When the phrase “Suzuki” was mentioned, I cringed at the vision I saw before me. Me barking, “Stand up straight! Bow hold! Bow hold!” My daughter in therapy twenty years later, telling some long suffering analyst how her love for music had been drained out of her one Twinkle variation at a time.

Besides that, I had made a career for myself espousing an alternative approach to traditional music education. “Music should be fun! Just make a joyful noise! Dance like Snoopy! Sing loud and don’t worry about the on-key part! Shake an egg to the music! Technique schmechnique!”

I didn’t grow up with Suzuki. I learned to play piano when I became literate, which is to say I was discouraged from the kind of exploration that all kids lucky enough to have a piano take on: fists on the piano, arms on the piano, one-fingered chicken scratch on the piano, poking out the melodies I heard around me. I was taught in a structured way, to identify those black ant-like marks on a clef with the corresponding white and black keys on the keyboard. I was yelled at to practice, but always by someone in the next room.

And yet, I became a Suzuki mom. Here’s how.

In September 2009, when Elle was just three, Katryna and I were booked to be a part of a Pete Seeger Tribute at the Academy of Music in our hometown, Northampton. My parents love Pete Seeger; their second date was a Seeger concert, and they discovered their love for each other over “Last Night I Had the Strangest Dream.” They came to town, and before the show, we got take-out from Paul & Elizabeth’s restaurant. As we exited Thornes Marketplace, Elle spied a busker on the street playing a fiddle. She’d seen a violin a few weeks earlier in the Elmo version of “Peter and The Wolf.”

“Mama!” she shouted pointing. “I want to play that!” I didn’t take this too seriously. Since “Peter and the Wolf,” she’d also decided to play the flute and the French horn. I’d had to explain to her that she was too little for woodwinds or horns (one needs a certain amount of lung power not usually achieved till the age of 8 or 9). But I knew little kids could play the violin, so I said, “Well, you can if you want.”

We proceeded to the venue. Backstage, the promoter introduced us to Emily Greene, a friendly looking woman holding a guitar. “Emily teaches Suzuki violin,” mentioned the promoter.

Elle started jumping up and down and attached herself to Emily’s legs right about then, and so I took her number. I looked up and said, “Good luck tonight. What song are you playing?”

She smiled and answered, “Last Night I Had the Strangest Dream.”

Emily sent us a packet of information that terrified me so much that I kept it on the far corner of my desk for the next nine months. Suzuki parents were expected to practice with their child for a half hour a day, listen to a CD daily, and attend with the child not only a weekly private lesson, but two monthly group lessons! Not only that, we were expected to read Shinichi Suzuki’s book Nurtured By Love and join a group discussion to talk about how it might shape our world view. As Katryna and I were on the road almost weekly doing gigs, and cramming to write our book All Together Singing In the Kitchen (a how-to and why-to raise musical children) I just didn’t have the time, although it did occur to me in a guilty kind of way that maybe–just maybe– being a Suzuki mom could inform my writing.

But Elle persisted. For nine months, she asked me steadily when we would start to play the violin. So in June, tiny violin in hand, we marched up to Emily’s studio. 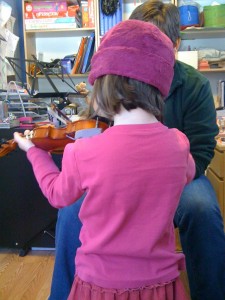 Right off the bat, Emily put us at ease. We didn’t have to practice a half hour–only five minutes at first. We had some simple tasks: listen to the CD, hold the violin, make a “bow hold.” Elle wasn’t even allowed to touch it to the violin. And we were given a chart and some stickers. Every day we did these things, we got a sticker. My inner perfectionist was gratified.

And so was Elle. This, I thought, might just work.

Recently–well, since giving up caffeine–I have noticed the pause in between Shiva and Shakti, the moment before the partners take hands for the dance. And this is a good thing for me. I tend to act without thinking; to leap before I look. Taking the time to really think about Suzuki was unusual for me in that sense. But I believed that if I had let Elle go forward right away with the violin that I would have burned out and given up before the practice could take hold. And while I might be able to do that to myself, I felt I couldn’t do that to my child. And so when we finally went forward, I made a deal with myself, similar to the deal I made when I became a parent. “I will do the best I can, and I will make a lot of mistakes. I will not be great, but I will be good enough.”

This attitude, when I remember to maintain it, works very well in terms of our practice. We don’t practice every day, but we never do less than five days a week. I do get impatient, but I have yet to threaten to burn her dollhouse. (See previous post). And when I do feel my temper rising–when she throws her rented violin on the floor in frustration, when she hits her brother with the bow, when she purposely plays the pieces twice as fast or three times as slow as they’re supposed to be played (I recognize that these crimes might seem wildly divergent to you, but to a musician, they’re all about the same)–I sometimes, OK, often, raise my voice. And then the image comes back of the poor tortured twentysomething in the analyst’s office cursing Mommy Dearest. And that’s when I get to soften, as we do in yoga when we find ourselves trying too damn hard. And I say, “I am so sorry. Let’s take a break. Let’s cuddle.” And she puts down that tiny violin, crawls into my lap and we sit. We listen. We observe. And when we are ready, we pick up the violin again and play.

Build Your Own Drum Kit!

From Katryna: A beautiful day called for finally trying to put together this drum kit. So I fetched the big white bucket I got last week after HooteNanny and found…

Rehearsing for The Day the Music Thrived

Beautiful banner created by Alison Wood. Tonight we met in Conway to rehearse for Sunday’s concert. Here is a portion of a video of us practicing “Georgia O.” Once again,…

Small Queen of the Earth

Queen Of The Earth, Child Of The Stars by Leela GraceOn the night that you were born, I looked out the window to the sky And the brilliant stars sang…