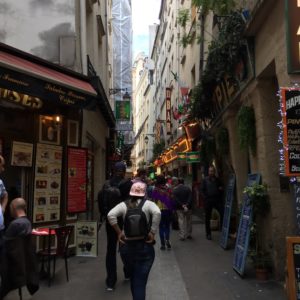 Every month or so, one of my children comes into our bedroom just before bedtime and collapses into my arms. “I am thinking about dying again,” the child says, and starts to sob. And I am right back there, too: seven years old, lying awake at night, the tears streaming down my face, thinking those dark thoughts. Among the top ten: life without my parents; the demarcation of the universe; or the worst: imagining some kind of not-being, non-consciousness that must be death. The thoughts would press on me until I was so sad and so scared I could barely function.

So I get it. I take the child into my arms, and rest my forehead on the child’s neck, and do my best to console. I say, “I used to feel this way when I was your age, and it made me cry, too.” I tell them what my parents told me, frail comfort though it was, as they held me while I sobbed: that it would be OK. That they loved me. That death wouldn’t happen for a long, long time.

On Friday night, Katryna and I were traveling to NERFA (North East Regional Folk Alliance), a conference of folk musicians that is somewhere between a festival and sleep-away camp with stringed instruments. We were to perform at the ungodly hour of 11:05pm, and because of this I was chewing gum and reading my iPhone as Katryna was driving. This was when I learned of the Paris attacks. At the time, I shut off my phone and focused on the gum chewing and stared out the window at the dark highway. It was too horrible to think about. We played our show, and we drove a half hour to another hotel. I slept poorly and got up early, stumbling into the hotel lounge where a breakfast buffet was set up. I found a corner on a couch where I ate my packed-from-home breakfast and wrote in my journal. The footage from the night before was all over the TV screens, and as I watched and read the captions, I shuddered. It would not be possible to keep this at bay, the way I’ve kept the world at bay for the past ten years or so since becoming a mother. I’d thought it my duty, in a way, to protect myself, and therefore my kids, from the news, from the world, from the violence, from the truth that, in fact, I could not promise my child what I’d promised. Because how can we know when and where death will come? And the truth also sank in–– sickly, shamefully––that I was only waking up to the violence of the world because this was Paris–a western city whose name is stamped on my Starbucks mug, a city I love and know, a city whose name is synonymous with romance and personal history, as in “Oh, sweetheart, I know it feels impossible now, but we’ll always have…..”

Bombings, mayhem, random violence are, as my friend Vijay Prashad writes, “the detritus of a disordered world. My heart goes out to those for whom the trauma of these events has become normal.” (read the whole essay,”We Are in Pitiless Times,” in Open Democracy.) Mine does, too, now. We wake up when the bombs come home.

At that moment, in the Best Western’s hotel lounge, a man across the room for me started shouting at one of the hotel’s waitresses. “Go home!” he yelled. “Go do your job!” The man was white, with an eastern European accent. Big, burley, in his late twenties or early thirties. The waitress was about the same age, Latina. She said to him, in a strong firm voice, “I am trying to do my job. Please go away from here!”
“No, you! You go do your job! Leave me alone!” the man yelled, standing up. And cold, miserable fear flooded my body. I imagined him pulling out a kalashnikov and firing away at her, and then at all of us. I stood up with my pathetic pyrex full of almond milk and Ezekiel’s cereal and walked out of there, all the way to the door of the bathroom in the hotel hallway. I actually thought, “I am going to escape this madman who is about to massacre us all. I will not leave my children motherless!” But I stopped, hovered in the hallway, suddenly getting a glimpse of my unbrave, 48-year-old self, and instead turned around and went back and sat on the couch and glared at the man. The waitress stormed out of the room, and as she passed, I caught her eye and thumped my chest, and she nodded at me. “You should not be treated like that,” I said to her. A few minutes later, the man skulked out, dragging his cooler behind him. (It turned out, I think, that the whole altercation was about him wanting to stock said cooler with extra breakfast items. The good waitress was only doing her job, after all, trying to keep him from taking more than his fair share.)

I’ve been thinking a lot about fear, lately. More than thinking: I’ve been writing. It’s part of my spiritual tradition to look hard at my behavior (every now and then, when things get bad enough), and see how I can change. All last week, before the attacks, I’d been writing down my fears, and then looking at what they cost me. For example, my biggest fear is that my kids will hate me when they are teenagers. But what do I do when I am filled with this fear, like, for example, when my single-digit kids sass me or do something teenager-ish? I take it personally. I get huffy. I sulk. I run away and lick my wounds. I catastrophize. In other words, I move away from them. I busy myself with tasks and activities that feel safe, that have to do with a life apart from them. And by doing this, I set up the greater likelihood that we will grow apart when they are teenagers.

Someone posted this piece by Doug Muder on Facebook over the weekend called Terrorist Strategy 101-A Review. Throw bombs at Western people and hope that they attack back. This way, all the people who have better things to do than go to war, have no choice but to participate (just as I am finding, now, that I must finally pay attention). To build your army of terrorists, you need America to get involved. “…you need a big, blundering, violent America that kills children and calls it ‘collateral damage’ as if Muslims weren’t human at all. You need American troops kicking down doors of innocent families and looking under the chadors of virtuous women in case they might have weapons down there. You need the American president acting like he’s Emperor of the World, drawing other countries’ borders and deciding who can be involved in their governments.”

Martin Luther King, Jr. famously said, “Darkness cannot drive out darkness; only light can do that. Hate cannot drive out hate; only love can do that.” All these people calling for war, even dear friends of mine who said to me yesterday that they felt “vindicated” about our striking of ISIS targets, are mistaken. Just as with 9/11, calls to assassinate Osama bin Laden (I’m not talking about the tragic distraction of murdering Saddam Hussain and going to war in Iraq), and even bin Laden’s eventual “removal,” did nothing to stave the violence. No war will end these kinds of suicide attacks. There is no violent solution. This is not even a case where there is a Hitler-esque figure, where (arguably) it might make some sense to strike. This is not World War 2. This is more like World War 1, where violence just begot violence, so hideous the world couldn’t believe it was real until it begot World War 2, and it was too late, and we were dealing with mass genocide and atomic bombings.

(The same people who are now calling for war, by the way, are the same people who, when faced with terrorism at home in the face of loner twenty-something white men armed with perfectly legal rifles and shotguns, shrug at the idea of stopping these guys. These are exceptional madmen, they argue. It would be impossible to disarm them, and besides this would violate their rights. Why they think we should go to war against a bunch of foreign madmen whose government may or may not condone their collections of rifles and shotguns and kalashnikovs is beyond me. Terrorism is terrorism, whether it be foreign or domestic.)

I’m not ready to tell my children any of this. I don’t want them to know what might be looming. And at the same time, I will answer them truthfully when they ask. The answer is the same in any event: I love you. I hear that you are afraid. It will be OK. We live until we die, and the love we make in the time we breathe and smile and weep, the act of standing up to bullies, lives on, in ways that are real and meaningful. What’s real and true––the only thing that really is real and true in this moment––are these arms holding you, right here, right now.