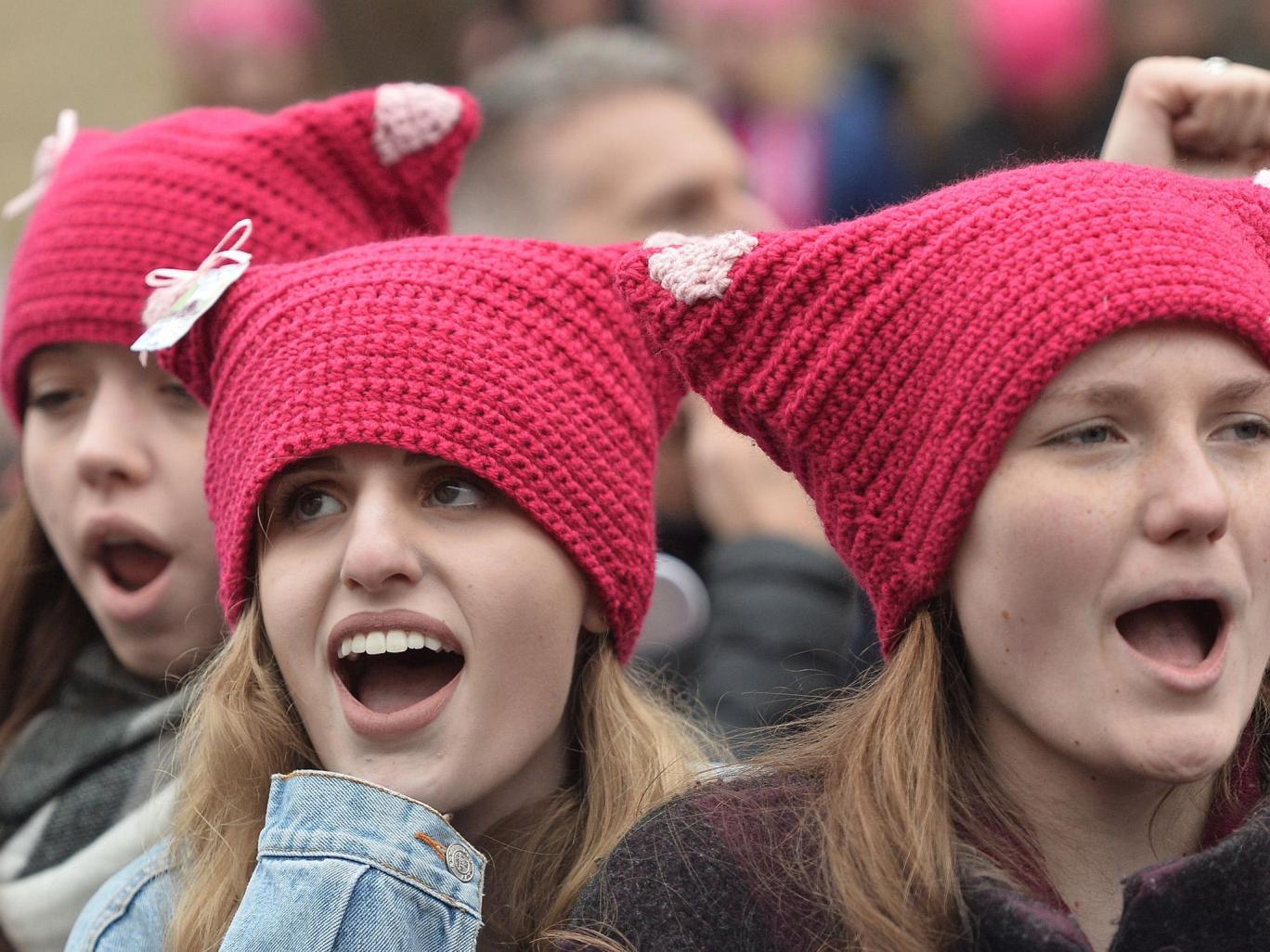 Tomorrow is the official Day Without Women.We are encouraged to wear red, to abstain from shopping and to tell our bosses to try to live without us. My bosses are my guitar students, writing students, and the characters in my novel, so I might slip some work in on the sly, though I have informed Tom that I plan on skipping all chores. I have a great red sweater and some red pants that will clash with it. And I already gave up shopping on Amazon for Lent, so I’m good there. I love this idea–this is my kind of protest. And it got me thinking about what it means to be a woman.

In 1997, I wrote a song called “Georgia O” about the artist Georgia O’Keeffe. The refrain goes, “I want to be a woman like you,” until the last chorus, when the singer changes it to “I want to be a woman like me.” This is my experience with women artists: we kindle each other. Maybe men do the same, but as I am not one, I can’t testify. I just know immersing myself in the work of other women musicians, artists and writers helps me to find myself.

I am reading Patti Smith’s wonderful memoir M Train, and I am using her as my latest model for I Wanna Be a Woman Like You.  She’s so authentic, so refreshingly cranky and real and surprisingly tender. I love her aesthetic, her polaroids, her passion for black coffee, which threads like a train through all of her chapters. The book was written many years after the death of her husband, Fred “Sonic” Smith, but it as if he is still a very active presence in her life. She is an inspiring loner. She writes about finding her ramshackle house on Rockaway Beach just months before Hurricane Sandy decimated the area, though miraculously sparing her house. Every day this independent women walks across the street to Cafe ‘Ino to drink their coffee, eat their beans and bread (dipped in olive oil) and write, or think about writing. She has mastered the art of living. The cover of the book has an iconic photo of the author: 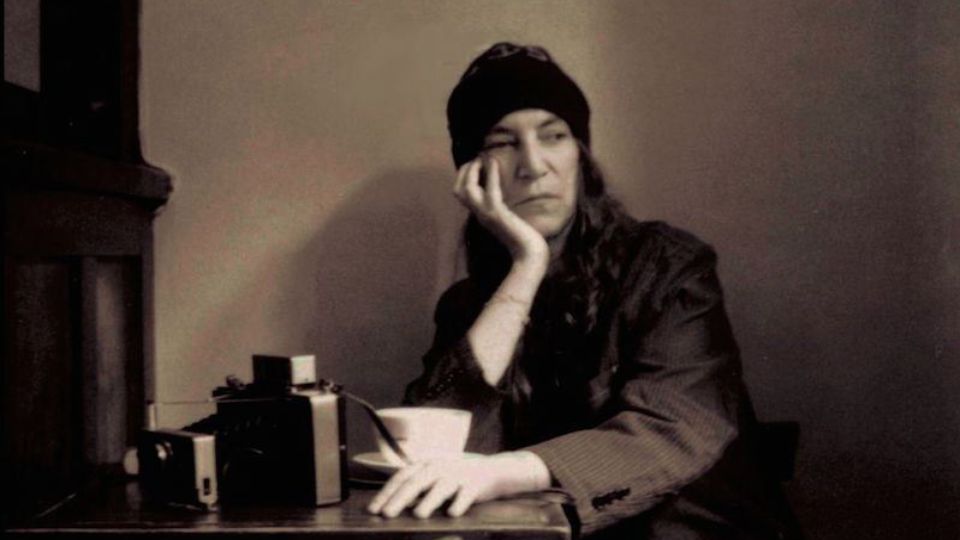 …which says it all. Here she is, completely herself. Real, sad, tired, beautiful. I want to be a woman like her. But mostly I work my ass off at being cheerful and helpful and positive, and instead I end up driving people crazy.

For example. Last Monday, Johnny quit violin. He has quit in the past, but there was something about this quitting that felt different. He’s older–almost nine. He knows himself better than he once did, and he is just beginning to question out loud whether his mother knows him at all. A friend of mine tells a story about his relationship with his mother, recounting a time when he’d cut off contact with her over a critical remark. His mother was always telling him that he should be a lawyer. At some point, he wanted to say to her, “Do you even know me?” But he didn’t say that. He just cut her off. This terrified me, and I had this story fresh in my head on the day J quit. So I let him. Usually, I try bribery, manipulation, or just plain force. NO, you can’t quit. Everyone in our family has to play an instrument!

So we had a quiet week. At first, I felt good about the severing. I was letting him have autonomy. I was seeing who he really was. Also, he was much more cheerful. I began to frame the whole Suzuki thing in its worst light. Rigid. Enslaved kids. Emotionless performers. Blah blah blah. But over the weekend, I went into a deep funk about the loss, and Johnny stopped being cheerful. I thought of the parents of the 18 year old girl who opened for us at Circle of Friends Coffeehouse four years ago. They said, “We told our daughter, ‘You don’t get to quit Math or English. You don’t get to quit music, either.'” I thought of my own lifelong regrets about quitting piano when I was thirteen. I thought about the sick feeling I always have when I quit anything. I thought about tough love, about the many times I wanted to throw in the towel on violin with either kid in the past. I thought about how good playing an instrument is for the brain. I thought about how every drop of structure can be used by an unstructured mind like my own, and my son’s (we are much more alike in terms of study skills and willpower than my uncannily organized daughter.)

Then my back seized up, as it seems to under certain mysterious circumstances, and I was a prisoner of some internal corset of steel. Am I just completely fused with my son? Probably. I gently hinted to J that he might reconsider. He looked right at me. “Mama, are you taking lessons with Maggie right now?”

Whoa. As a matter of fact, I am not. In early February, I heard back from my agent who had a huge list of suggested revisions. I resumed work on my novel, and tried to disengage from anything not critical to the operation of our home and businesses. And as a result, my soul is a little sick. When I don’t practice my instruments, this is what happens to me. A part of me dies, even as another part thrives. I think this is the price to be paid for not ever being able to make up my mind about whether I was a musician or a writer. My shoulders pay the price, as does my poor family.

Tom took me by said shoulders on Sunday night and looked at me seriously. “Listen. You won’t want to hear this. But you need to lay off him. He is going to play music again. But you have to wait. You can’t nag. It has to come from him, and not from you or any other authority figure.”

I nodded, tearfully. “If you love someone, set them free,” I sobbed, thinking of Sting’s annoyingly ungrammatical song. I wiped my eyes. “You need to be my sponsor on this. I will call or text if I get the urge to nag.” We shook solemnly. I wandered into the empty music room. I stared at our old Steinway, already out of tune (my piano tuner says it’s a goner and we need to find a new one). I sat down and played the piano accompaniment to a couple of Johnny’s Book 3 Suzuki pieces: a Bach Minuet and a Gavotte in G minor, a very sad song. I was terrible. But as I followed the music on the page, my hands came to life a bit. They began to remember what to do. As I labored, Johnny passed through the room, doing some cartwheels and jumping on the couch. He picked up his violin and said, “If I WERE to play a song, I wonder what I would play?” I did not respond, but kept my eye on the page of music.

The next morning, Johnny un-quit.  I can’t say I didn’t have anything to do with it. Perhaps I had him sit down with a piece of steno paper, the kind with a line down the middle, and told him to list the pros and cons of playing violin. I did maybe also slightly bribe him with a 100 day challenge (100 days of practice = $100 gift card to Target.). Would Patti Smith do this kind of thing? Uh, dude. No.

But so what. The older I get the more I think it’s about self acceptance, not self improvement. I am a bossy, controlling person. This is not completely a bad thing. I get stuff done. I show up. And I have a really stiff back, at times. And for the past two days, I have a son who practiced his violin. Parenthood is hard. We never know if we are saving our kids or killing them. We can only do what makes sense in the moment, and out of the soup we are in, this seems right. This Sunday, Johnny and Lila and I are going to the Suzuki Festival at the New England Conservatory of Music. We will see who and what my children find when they arrive. Maybe themselves.

This trip is my 50th birthday present to myself. And I feel so ashamed about that right now. I have a long list of places I wanted to see–Tate Modern,…