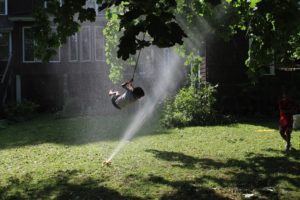 The last thing I should be doing right now is posting a blog. So maybe that’s why I need to do it.

I am navigating the world of ebooks, to self-publish my 2008 title How to Be an Adult. The first time around, I had a deal with a local publisher to format the book. This time I am trying to figure all that out myself. Also, I am trying to write songs, and learn the 3 songs I’ve written so far this year, in time for Falcon Ridge. And I want to publish songbooks to go with our CDs Rock All Day/Rock All Night, and with our CD The Full Catastrophe. For the latter, I have a vision to put together a collection of essays on motherhood culled from this very blog. And I am deep in revisions of The Big Idea, my novel about a family rock band.

And even writing this, I am having trouble breathing.

I know I would be a lot more sane if I simply picked one project at a time to focus on and stopped trying to rotate the hot pans on the stove. But to let any of these projects go feels like death to me. 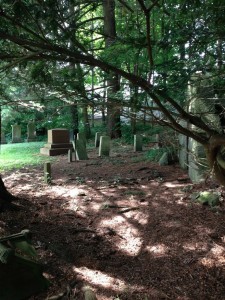 Add to all this a work schedule and a family schedule that’s kept me extremely happy and occupied to the tune of not having a day off since Memorial Day. So on Saturday, Tom sent me to Williamstown, my ancestral home and the birthplace of my band (we got our start at the Williamstown Theatre Festival) for about 22 hours. What did I do? Sat in air conditioning and worked on all my projects. I sang through my new songs, recorded them on GarageBand for Katryna; worked on laying out How to Be an Adult and uploading it to CreateSpace; typed in a new first scene for The Big Idea; walked to the Co-op to eat dinner from their salad bar; and in the morning I went for a run to the graveyard where my grandfather and his family are buried.

Today I spent the day at Elle’s Suzuki Institute, which meant I followed her around and took notes, avoided my iPhone, stretched my back a lot and listened to countless kids aged 5-14 playing a huge range of the Classical music canon. It’s been beastly hot in New England––and everywhere I imagine––and no one is in an especially good mood. As I made a commitment this year to shake my bad moods, this didn’t sit well with me. But the more I tried to “snap out of it,” the more unpleasant I found the entire experience. And I kept asking myself, “Why am I not feeling the magic I always feel when I’m here?” Because for the past 3 years, Suzuki Camp has been one of my favorite places to be. I am usually a sucker for the whole package: the play-ins, the awesome teachers from New York, Maine and Boston, the lunches on the lawn, the antics during group class, the camaraderie of both kids and parents. But today, I was just bored and uncomfortable and sick of “Perpetual Motion.”

I’m sick of my own work too, at times. And sick of myself and my inability to pour my everything into just one project. I wish I had a boss, or a life coach, or a really tough friend, or my sister to tell me “Drop this and this and this and focus on that.” I wish sometimes that someone would make me choose.

In the middle of the day, after lunch, the whole campus troops over to an old church where kids have their recitals. Over the course of a week, every kid in the camp gets a turn by him- or herself on stage to play a solo. Elle is playing something called “Gavotte from Mignon” by a composer named A. Thomas. It’s cool–– and sounds the littlest bit like the theme from NPR. But today she wasn’t playing, so the two of us sat with another family, turned our programs into fans, and took turns fanning each other while we listened to the 13 or so kids get up and take their turn. Some were good, some were beginners, most had that stereotypical Suzuki Glaze in their faces that made me doubt the method way back when I thought I had a choice about my life. That was before Elle grabbed me by the hand at age 3 and dragged me to our current teacher, Emily Greene and insisted on studying the violin with her. And pretty much, until today, I haven’t looked back or regretted any of it. Suzuki has given a lovely structure and flow to our lives, and I mark my days by the CD we put on for the kids to listen to in the morning, and the check boxes on their weekly assignment sheets as we go through our practice items together every day (Suzuki says, “We only practice on the days we eat.”) As I listened to the kids play, I felt listless and hot and despairing. Completely uninspired. My new songs are ok, but they are all over the place. There is no core to them, nothing that links them together in any way. I can’t see our next CD. I have no idea in what direction to write.

The last kid to play was a 12 or 13-year-old boy. He put a chair down on the stage and sat down with his cello. The director of the institute, who doubles as the piano accompanist, left her post; the boy began playing a movement from the sixth of Bach’s suites for unaccompanied cello: the Allemande in D. He played with his eyes closed, as though he were as much a listener as a player. After a minute, I poked Elle who was busy fanning her neighbor. “Listen to this,” I whispered, and she did, sitting up in her pew for the rest of the eight-minute piece. The room held the music tenderly: the bruised sentiment of a man who had recently lost his wife. I was absorbed into the music, forgetting about my own artistic woes, forgetting about my big problem about how to get out of my bad mood, forgetting the heat, forgetting the glazed faces. I rode the current of the music. And when the boy pulled that last lovely D out of his cello, I rose to my feet and applauded, tears spanking my eyes.

The rest of the day I was more present for what I love about Suzuki and this camp in particular. Elle took a fiddle class with a remarkable teacher named Sarah the Fiddler who explained to the kids that the great thing about fiddling is that when you make a mistake you get to incorporate it into your playing and figure out why it works: which is basically my modus operandi. Then there was orchestra, where the amazing Tyson somehow gets a group of kids who sound like they are each playing the “Star Spangled Banner” at a different speed to pay attention enough to him to get them, by the end of the week, to sound coherent. And he does this without ever yelling. I knew the day was a success when I told Elle it was time to go, and she narrowed her eyes suspiciously. “Is every single other kid at this whole camp going home too?” I said yes. And only then did she say, “Well, OK” and followed me out the door. 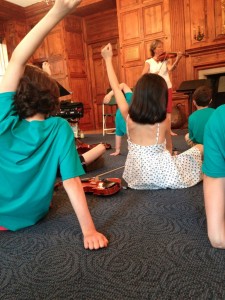 Maybe this is what being an artist in midlife is all about: moving the different pots around. Maybe it’s about doing the thing that calls you in the moment, even if different things yell at different frequencies. As I wrote a few months ago, it’s become clear to me that my mission is not, after all, to write some memorable songs that will outlive me and be sung by kids 100 years from now on the back of school busses, or whatever it is they might be driving. My mission is to have a good life and to spread around some of whatever it is I’ve been taught so that others get some of the goods as well and get a chance to live as well and joyfully as I have lived. Process over product has been my motto of late. So this evening I played with my kids. We got wet, and I picked a bouquet of flowers from my garden. And instead of working on either of my books or trying to write a new song, I wrote this post. Tomorrow I will pack our cooler and violin and music stand and we’ll go back for another day of Suzuki, and let my own projects simmer on the stove.

This is a bad formula: rainy day, PMS, and a nostalgia mix from 1989. I upgraded to Spotify Premium (though I am not sure what I gain, since I don’t…