The Day the Music Thrived and Why Music Education

It was one of the great pleasures of my life to see our dream of creating a pan-Northampton Public School concert/celebrations/fundraiser for YesNorthampton.org become a reality last Sunday. On June 9, musical and theatrical groups from Jackson Street, JFK and NHS along with my band, The Nields, came together at First Churches of Northampton to create a neat 90 minute (to the second!) show called The Day The Music Thrived. The amazing Expandable Brass Band did an incredible flash mob lead-up to the event, rocking the sidewalk outside the church with a “Vote Yes” song. Everyone volunteered their time and services. The event went so seamlessly because everyone gave 110%. It was Northampton at its best. 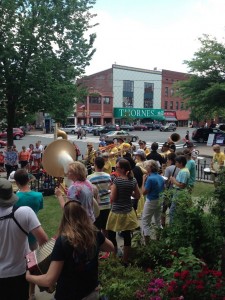 As a mother and musician, I am deeply disturbed by the proposed budget cuts, especially the ones that put the jobs of several music teachers on the chopping block. Before the concert, my outrage was purely theoretical. Though I’d witnessed my kids’ own wonderful music teacher Kim O’Connell in action, I had only heard about the legendary Claire-anne Williams, band and all-around music teacher for JFK, whose award winning Jazz band blew everyone away with a cover of “Birdland” on Sunday. I had only heard tell of the Northamptones, NHS’s signature a cappella group led by the fantastic Beau Flahive. I’d only assumed that the theatre program was fantastic. Now that I have seen these wonderful teachers in action, I feel more strongly than ever the particular potential loss rather than the theoretical. Time to remind ourselves why kids need music in the schools.

1. Music education correlates with better attention and self-control—great for kids with ADHD, Asperger’s, but also great for neurotypical kids–– to foster focus and attention, two attributes which are the bedrock for all other learning.
2. Learning music is akin to learning a language—kids who know music are essentially bilingual and can “converse” with people all over the globe.
3. It’s the one academic discipline that works both the left hemisphere and the right hemisphere of the brain equally.
4. Playing an instrument increases fine motor skills.
5. Performing in front of others is a basic executive skill not generally taught.
6. Band and Chorus kids are less likely to do drugs, abuse alcohol, and become teen parents.
7. Kids who take music lessons have better spatial relations abilities
8. Kids who take music lessons have, on average, a 50 point higher SAT score.
9. Kids involved in music are less lonely. Middle school and high school years can be anxiety provoking to say the least. Putting socially anxious kids in a band or chorus where there are definite tasks, roles, goals, alleviates the anxiety and facilitates cohesion, camaraderie—all without drugs or alcohol or inappropriate sexual behavior.
10. It’s what they’ll remember, years from now, when they look back on their school experience.
So I’d ask this: rather than talking about cutting music teachers, why don’t we have more music teachers? My sister Katryna’s kids go to public school in Conway. They have music five days a week. Why shouldn’t we?
Vote YES on June 25 to preserve what we have. And then let’s roll up our sleeves to change what’s wrong systemically in Massachusetts and in the federal government; let’s rethink our whole attitude towards the arts. Let’s give our kids what they need to be the responsible, creative thinkers the 21st Century needs.