October has been a veritable study in fear and anxiety. As I wrote last month, it started with a diagnosis of melanoma in situ–a creepy black spot on my leg. The question, “Could it be cancer?” was answered in the affirmative, though “in situ” is a very very good diagnosis. “If you are going to have cancer,” I explained to my kids, “this is the good kind.”

“MOM!” Johnny shouted at me. “If you ever get the bad kind of cancer, DO NOT TELL ME! Because what you just said scared me so much, I don’t even want to know if it’s ever bad!”

“At least it’s not anything to do with my breast,” I told Tom. I live in fear of breast cancer. I had a scare a few years ago with a questionable mammogram that took 6 weeks to resolve. And now that you mention it, why was my left breast vibrating as though I had a cell phone attached to it? As though it were a snooze alarm. Hmmm. I had recently gotten a FitBit Blaze. Perhaps it was vibrating up into my boob. I took it off. Still, every hour or so, my breast went off, for about 20 seconds.

The weekend the Access Hollywood video broke, Tom and I went up to the Adirondacks to escape from the election and watch the leaves change. I have to admit, we failed at the former, though the foliage was the most glorious I have ever witnessed. 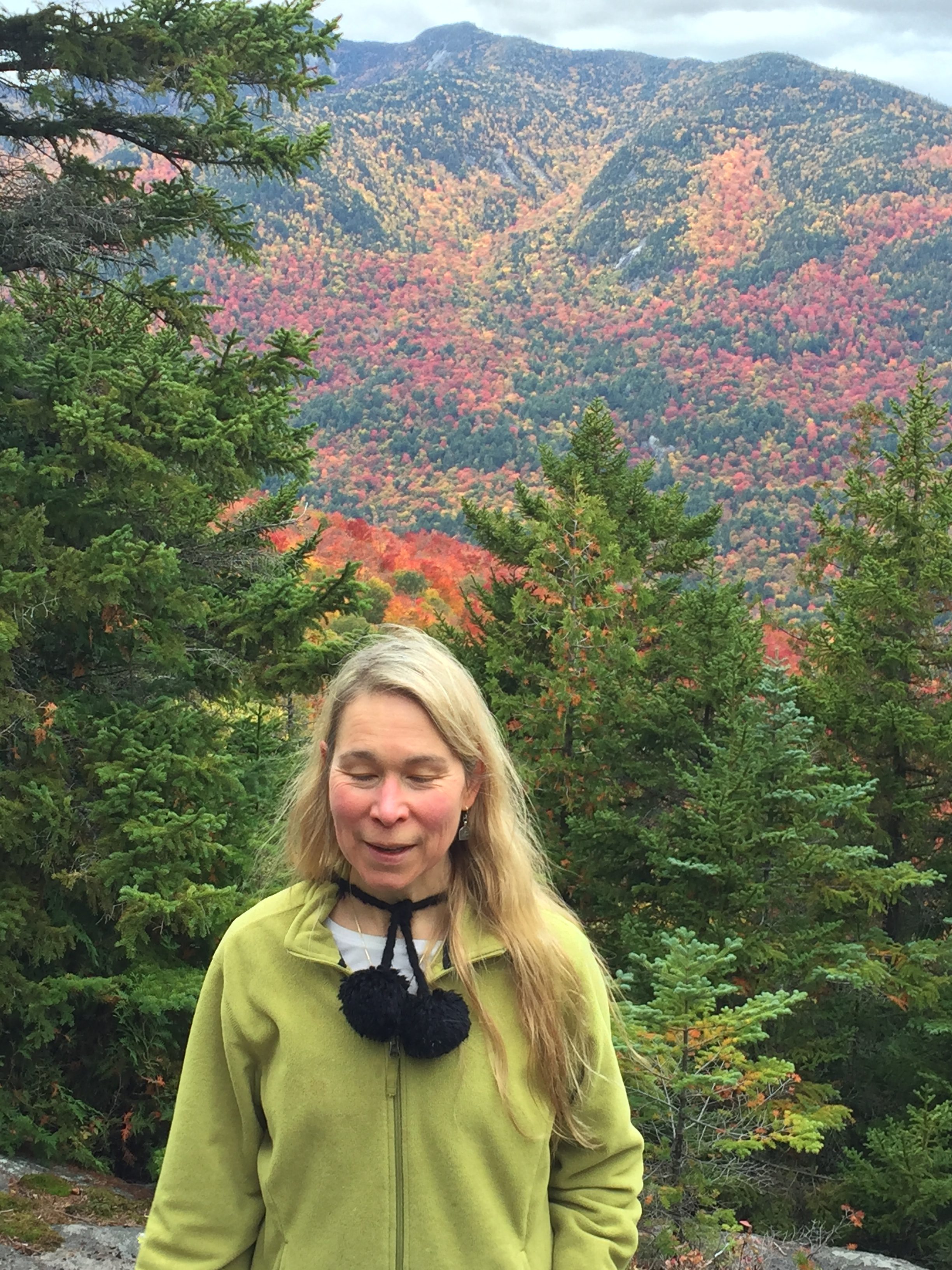 We gorged on the news, and even found a TV at my aunt’s house to watch the second debate. “I wish I still drank,” I told my uncle Mark as we all gathered, most folks with wine glasses in hand. “But if it gets bad, I am going to chew sugarless gum.” Around the time Drumpf started stalking Hillary, I reached for my pack of Orbitz.

We came home Monday night, and as I have done a thousand times, I cooked a spaghetti squash the way my friend Katy Schneider taught me: whole, which keeps it moist and delicious. When I pulled it out of the oven, it exploded into my face. Fortunately I was wearing glasses. 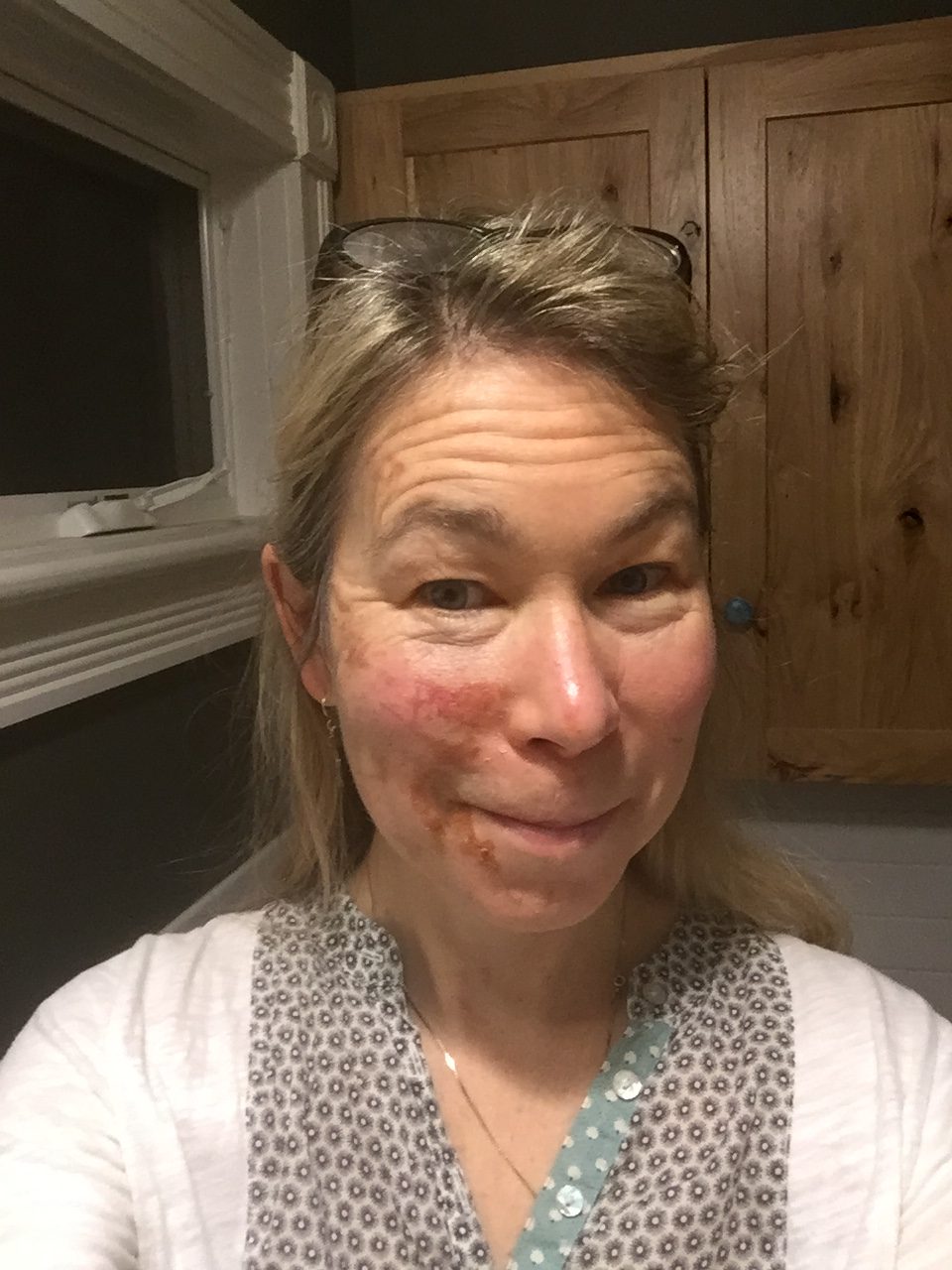 People! Prick your squashes with a fork!

Yes, it hurt a lot. I took Advil and applied cold washclothes, and eventually burn cream. For several days, I lay low, staying out of the sun, as per my doctors. (Between the melanoma and the facial burns,  I am basically NEVER allowed in the sun again.) It was a good exercise in meditation on the national discussion about how we judge women on their appearances. It is, I got to discover, a great privilege to have an unscarred face.

On one of my many visits to the doctors around my various ailments, I mentioned to my PCP the matter of the vibrating breast. “Huh,” she said. “Let’s take a look at that.”

That’s when she found the lump.

While my face healed miraculously, I hunkered down with my new worry. The lump was pretty big, and I should have found it myself, except I am squeamish about these things and like to adopt a kind of “don’t ask don’t tell” policy with my body. Don’t show me your lumps, and I will spare you a mammogram, is kind of how it goes. But I went for a mammo and ultrasound, only to find that because my breasts are extremely dense, nothing showed up. Except, of course, we could all feel the lump. So. Biopsy.

I did what I always do when I am afraid: I called and/or texted all my friends and family and sifted through their responses. It was lovely to have that support–part of the Blessings I wrote about last month. Though it was becoming a comedy routine of Nerissa Injuries, and my loved ones had trouble keeping them all straight. “Which biopsy? Which surgery? Good thing you are seeing a plastic surgeon for your leg–she can handle your face and boob, too!” My therapist, when she saw my face and heard about the two biopsies, said simply, “What the F*%#?”

But one text stood out from the rest: “You can’t know whether or not you have cancer, and you won’t know till the biopsy comes back. So for now, think positively. Just count your 7 million blessings.”

Good reminder. Though October contained more than its share of losses––the deaths of parents of my dear friends, the last visit to our family house, the shocking dissolution of our democratic values––it is still palpably clear how lucky I am. I thought of the Jungle in Calais. I thought of the earthquake victims in Haiti. I thought of friends who were already living with diagnoses, friends who had lost spouses and children. “We are renting these bodies,” my wise friend Rosie said. “Nothing is permanent.” And I pushed my nose into the ponytails of my school-aged children, watched them play soccer in the backyard and listened to the sounds of their violins, sang with my Local Chorus and Sarah Lee Guthrie & Johnny Irion, and with Dar Williams, and with my sweet sister, and re-made a video called “Jesus Was a Refugee.”  I poked at my lump, waited for the biopsy results and watched a lot of Modern Family with my kids, and chewed sugarless gum. Took a media fast from the election. Borrowed a pantsuit from my mother for a Halloween costume.  “It’s OK to distract yourself,” my sister said. “It’s OK to baby yourself. Get take-out, at least.” I fought the anxiety and listened to Pema Chodron and tried to live the motto: “The only thing we have to fear is fear itself.” 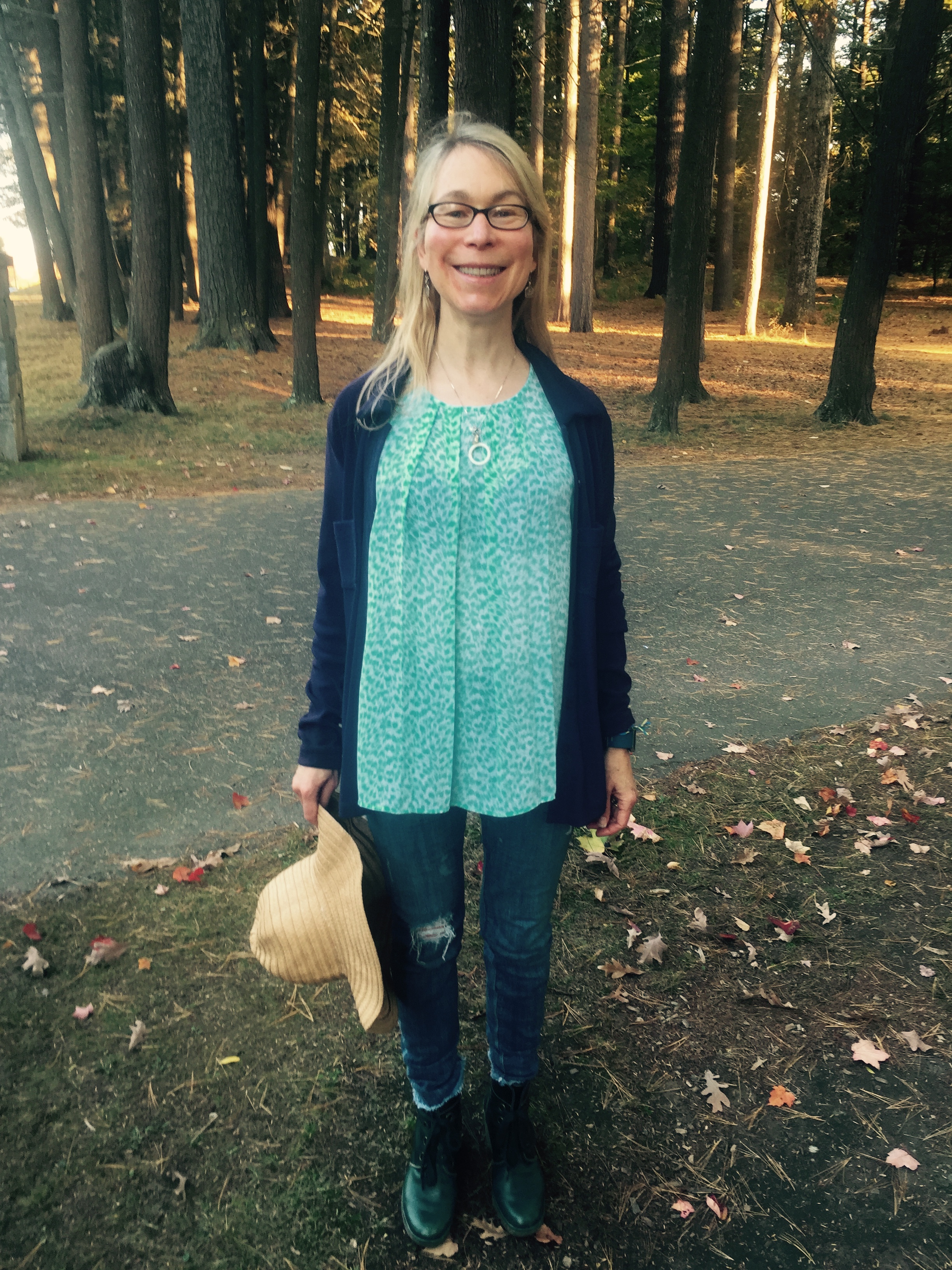 As a songwriter/novelist, it is my job to make sense out of life events. I am constantly interpreting my reality as if I were reading a story. So what did this mean, that I had a bad mole, blew up my face and had a lump in my breast all within ten days? Was it because I’d pushed myself so hard this past year trying to finish my novel? Was it because I hadn’t taught my guitar class and wasn’t practicing my piano? Was it because I was eating almonds? On the days when the fear caught up with me, as I caught myself bargaining with God, the only thing that nudged at me was my deep regret that I have not seen my kids play a single soccer game this month. I have had gigs every time they had a game. What was my purpose here? Nothing really seemed to matter in terms of my work being left undone. The only thing I could think was, “Please don’t let my kids lose their mom.”

Yesterday, as the late October snow began to fall, my cell phone rang. “You are fine,” said my doctor. “Benign breast tissue was all we found.” Benign. The most beautiful word in the English language. We came home from the co-op, roasted a chicken, curled up on the couch with our books and twined our legs around each others’. On another day, I will schedule another surgery to remove the vibration-causing benign lump. For now, I will continue to count my 7 million blessings, thank my dear scarred body for letting me live in it for the present moment, and look forward to Saturday when I will watch both kids play soccer games on the last weekend in October. 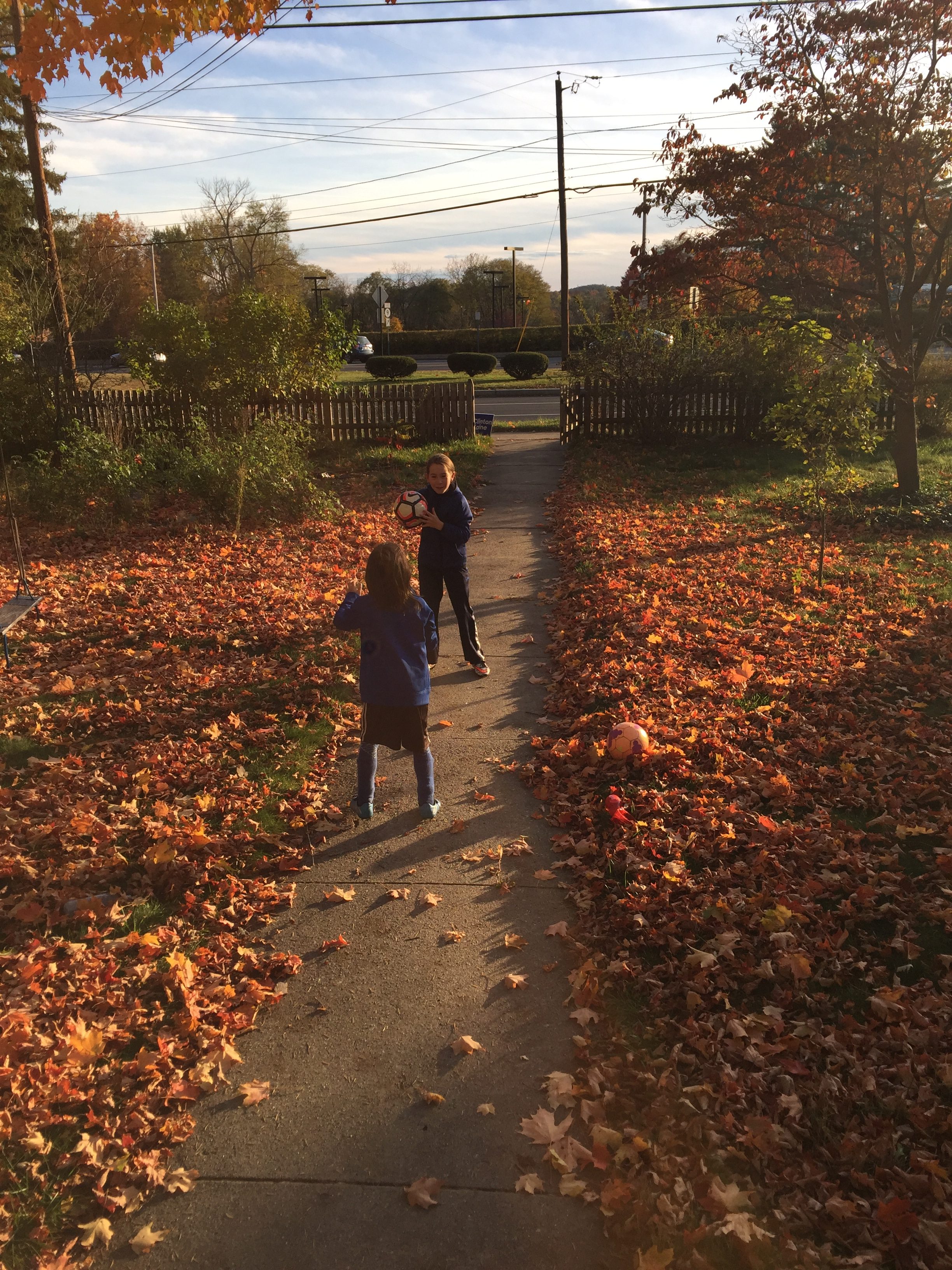 We meet at 3 I have coffee, you have tea cause you’re Such an Anglophile But I’d take Paris anytime… -Some band from the 90s. Points if you know the…