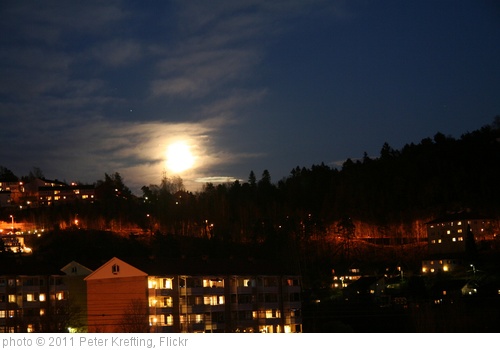 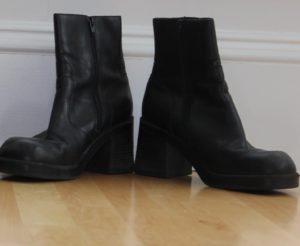 Stop wearing out your shoes.-Jeremiah 2:25

It’s because of the writers in my writing group that I got to see the full moon tonight. They insisted. And I had absolutely no defense; it’s a mild lambish night in early March. The sunset, I’m told, was spectacular, and we were waiting for some group members anyway. And so I got up from my comfortable chair and the lot of us traipsed out into the sweet gentle night. There she was: filigreed with a few wisps of cloud, framed by the bare branches of our neighbor’s oak. Yes, we howled.

In less than a month, our 16th CD The Full Catastrophe is due to be released. We are scrambling now to do the artwork. Right now, I should be proofreading the lyrics our graphic artist sent us. I should be posting about the writing process of one of the songs, as I have committed to do. Instead, I am worrying about my family, about what my daughter said over dinner when I mentioned that I wouldn’t be home tomorrow night because I’d be in Maine doing a show, and that she should do a practice recital for her father and brother. She said, “Why are you always not at home, Mama?”

“It does seem that way, doesn’t it,” I said. Putting aside for the moment the notion that I might not be “home” in a more figurative way, given my disconnection to the moon and the sunset, It’s true that we’re facing a lot of travel. This month, we were in southern CT last week, Florida next week and Westchester county the night before her big Suzuki book one recital, the show in which she performs all 22 pieces she has learned thus far. And April is busier still. We’ll be doing a “blog tour” for our book All Together Singing in the Kitchen: Creative Ways to Make and Listen to Music as a Family which came out last September, and another one for the CD; we’ll be doing radio, and traveling up and down the eastern seaboard doing shows. Am I complaining? No way. I can’t wait. We are so lucky to have these shows, this media interest and a work of art we love and believe in. But I do feel absolutely torn, as countless artist/entrepreneurial moms have felt before me. How can I leave my children? How can I leave my husband? And somewhere nestled discomfitingly in there: How dare I?

Well, I’m grateful right now to the most unlikely source for the fact that I can answer that. Yes, I dare. Pardon me while I rant for a minute. The heinous ridiculousness that came spouting out of the mouth of Rush Limbaugh last week has done a lot to help me get my feminist on. In fact, the whole debate about contraception has been a refreshing reminder to me that
1. I live in a bubble and so do my kids and husband.
2. There are people out there who think Rush knows what he’s talking about (and by the way, does he think birth control pills function like viagra? That’s the only way to make any sense out of his rant)
3. I really care that my daughter and son are well educated about contraception, about dignified ways of expressing their opinions in public and most importantly that the small voice of reason inside their own hearts is the voice to trust, and not that of some institution that purports to be their spiritual guide.

There, I’ve said it. The Catholic church has done a lot of good (championed the poor and worked tirelessly to provide for and protect the sick and needy all over the world; called for peace when to do so was extremely unpopular) and has given us a lot of great thinkers and writers (Dorothy Day, Thomas Merton, Henri Nouwen, Thomas More, St. Ignatius, St. Augustine). But they have got to leave to Caesar what is Caesar’s. Even my late, blessed, Republican Catholic mother-in-law told me a year before she died that if she had all power in the world, or could ask God for one wish, it would be for all women to have free birth control.

Meanwhile, I have got to make sure my kids know God directly, through their own quiet times, through their own communion with the full moon, through their own journey, and through their own understanding of love and respect. Is it a given to them that women should have an equal shot at those truths we have agreed should be self-evident? Is it a given to them that people (of any gender) who marry and agree to raise children together both deserve work and avocational pleasures that are fulfilling, that connect them to the community in the hopes of making a better world for all? But women cannot have anything like an equal shot if every other year they are puking in a garbage can from morning sickness, blearily trying to keep up at a meeting when they’ve been awake half the night breastfeeding, cleaning up after the small tornadoes that are their children and generally worried that they might get knocked up again.

OK, rant over. While it’s important to look up from my own luxury problems now and then to see what the dialogue is outside of my little world where my problems are “great job but too busy for great family,” we now return to our regularly scheduled program, which might be apropos. I am exhausted, as usual. I got home at 1am from the show in Connecticut (at the Kate! What a great theater!) on Saturday morning and was woken up at 6 by both kids bouncing on the bed, delighted to see their wayward mom home again. And somehow I have only just today (Wednesday) recovered from that breach in my sleep pattern. Time to reassess how I spend my precious time and calories. I need to save aside some energy for promoting this CD. I need to do less in order to do more. I need to make time to sit in silence, waiting to hear the voice that matters most. That’s the voice that keeps me from yelling at my kids; the voice that comes up with the chord patterns and melodies to my songs; the voice that suggests ways in which our work can serve the greater community and not just myself.

And most of all, I need the time to teach my kids to stop wearing out their shoes, sit and be still and listen to their own inner wisdom, gaze up at the moon when she shines her lovely face down through the clouds.

How do you slow down? Do you drive until you bump into something the way I do, or do you have some kinder checks and balances? 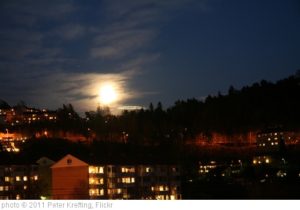 A photo Elle took of me which I think I already posted, but I am showing it again to demonstrate my characteristic hunch over my computer which most likely contributes…

Ah, it’s all coming back to me. The cracked nipples, that slightly sour smell of witch hazel and healing flesh, the endless bleeding, the Ibuprofen tablets the size of horse…

Blasts From The Past

“It’s like watching a fireplace,” said Tom tonight, pointing at Lila who was prancing around the center of the room, surrounded by writers. They had just arrived, from as far…