I discovered yesterday that Patty, our longtime manager, doesn’t believe in indoor heating. I figure this has something to do with her obsession with women’s basketball and subsequent wardrobe of extremely thick Connecticut Sun sweatsuits. Or maybe it’s because she drinks so much hot coffee that she is inured to the cold. This was the only explanation I could come up with yesterday, as I sat on her living room floor with my fingerless gloves and my polar fleece balaklava and my filthy yellow parka, addressing envelopes, stamping envelopes with Katryna’s super cool woodblock stamp that says “XVII”, signing copies of the new CD in one of the mirrors of the mirror barn that lays out on the booklet as one opens it. 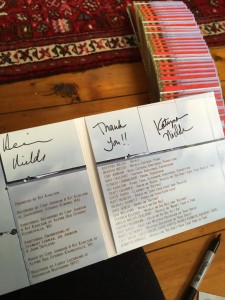 I put a CD into an envelope, sealed it, and looked at the address. Fans from Missouri. Fans from Texas. Fans from Florida. Several from Seattle. One from Wisconsin. Many from CT, NY, MD, VA. Too many to count from MA. I was overwhelmed with gratitude for these fans, some whose names I knew well; some whose names I’d never heard, though perhaps if I saw their faces I would recognize them. I saw names of friends, and names of cousins I rarely see. All four of my aunts pledged, and to see each of their names on our packages warmed me to the point where I almost felt like I could take off my balaklava. And in that cold living room, with Patty’s daughter and granddaughter (one helping, one charming) and Katryna, my kids (also helping, charming) I felt a solid completion, even though we didn’t get every label onto every envelope, and there are still boxes of CDs, a few books and bags scattered around. 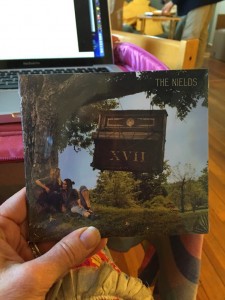 It had already been A Day. Jay’s first cavity filling that morning had gone from bad to worse. He has a gag reflex, and is not such a fan of dentist in the best of times, but having been assured by Elle and me that fillings were no big deal, he was not prepared for the horror he encountered. “They are actually DWILLING MY TOOTH!” he wailed, putting his hand up to stop them, to take the horrible beige laughing gas mask off his sweet little tear-stained face. “Don’t cry!” the dental assistant kept saying. “The gas can’t work if you get all stuffed up and breathe through your mouth instead of your nose!”

I wanted to hit her. Instead, I held his two hands and kept murmuring, “Mama’s here. Mama loves you,” as he became incrementally traumatized. Having read Peter Levine’s Waking the Tiger, I suggested he shake himself off like a dog when he finally got up, trembling, from the dentist’s chair, but all he wanted to do was be held. So I held him. 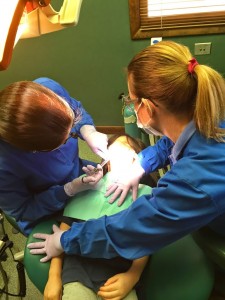 When we arrived at Patty’s, I was starving, having had to take my kids to both Berkshire Yogurt (closed) AND GoBerri, because of the dentist (naturally, if one has cavities, and then fillings, one needs more sugar to get over the affront). But just as I heated up my meal and was sitting down to eat it, both Katryna and Patty’s daughter Ashley took one look at Jay and shouted, “He’s having an allergic reaction to novocaine! Go get him some Benedryl!” I hesitated, fork halfway to mouth. But these two Supermoms had no mercy. “NOW! Get him Benedryl NOW!” So, I gave one more reluctant glance at my warm food and made Jay put his coat back on (well, actually, given Patty’s no heat rule, he’d never taken it off) and we set back out to the van.

Couldn’t there just be one less thing to worry about? Here we are in the midst of Blizzageddon, trying both to get our Pledge packages out AND prepare for possible power outages. We have no fireplace, wood stove or any other way to stay warm should we lose power. I was planning to get my van filled up with gas and make it to Radio Shack in between the PO and Elle’s violin lesson, plus the requisite trip to the grocery store for extra bananas. So in the van, out of sight of the Supermoms, I decided to call the dentist before driving to the Rite Aid.

“Is it just on one side of his mouth, “the receptionist asked immediately. “Take a picture and email it to me.” I did so, while still on the phone with her. 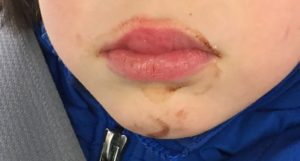 AH! The joys of a smart phone!

“No worries. He’s bitten his lip because he’s numb. Tell him to stop.” She said, and I brought my traumatized son back into Patty’s cold house.

Even with all of us signing, stamping, stuffing, we had to dash to fill Patty’s Prius with the boxes of envelopes to make it to Patty’s appointment with the Easthampton PO for 3-5pm. As we were loading up her car with boxes full of stuffed envelopes, she discovered that her Prius’s latch was broken, so she called AAA. Finally, latched fixed, Elle and Jay and I helped Patty get the boxes into the small car. We got to the PO at five of, only to find that they were closing because of Snowcapolyse. The four of us stood there with huge boxes of stuffed envelopes in our arms, Jay holding the “special” ones as Patty had instructed him to do. The employees were all refusing to make eye contact with Patty, who was fuming. But we prevailed. I’m sure the kids’ cuteness didn’t hurt. Who can resist a couple of kids in snow parkas being helpers? So finally, the Postmaster General of Easthampton had no choice but to accept our many (like 500) packages. They might sit there until Snowgas Khan has retreated, but at least they are out of Patty’s Prius.

Snowgas Khan, or SNOMG! turned out to be a bust. Just as well. I am going to close this almost pointless post with a couple of observations.
#1.Patty totally rocks, and we won the jackpot in tricking her to be our manager lo these 20 odd years ago.
#2.My dear friend Anne emailed me this picture to prove that we were smart in our choice of album cover. Cool People, a piano, a tree. Nuff said. 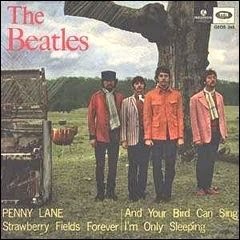