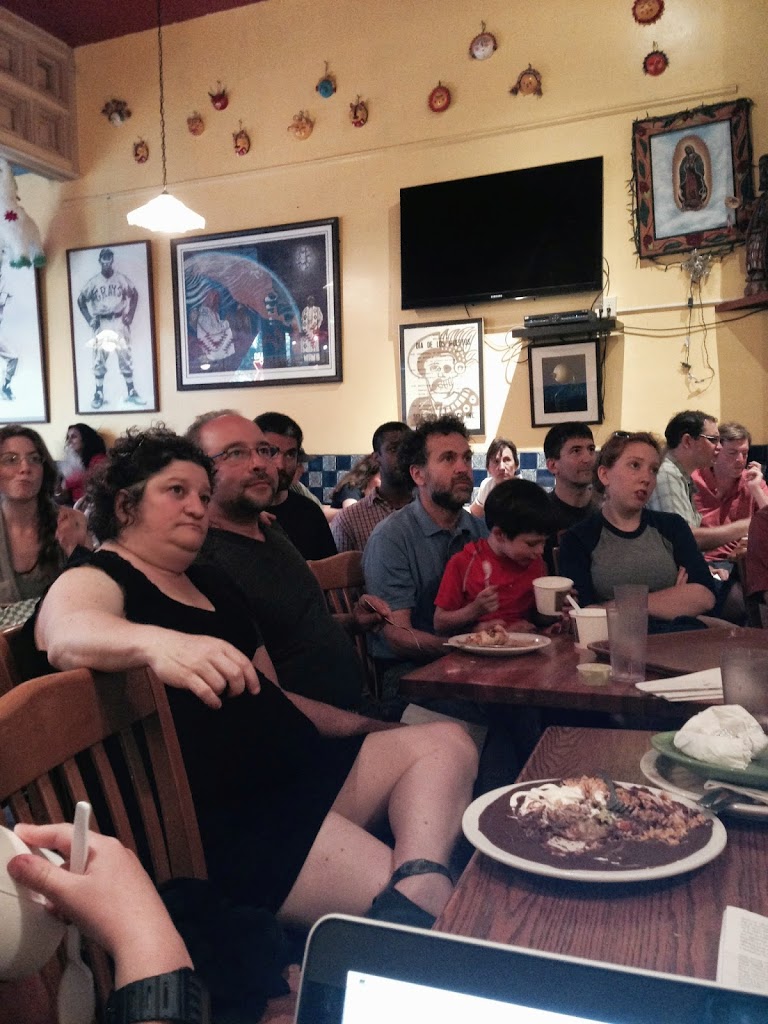 Though I’d intended to blog daily in the weeks leading up to the making of our 17th CD, June found me in a whirl of end-of-the-year parties, potlucks, celebrations, graduations, baby showers, the World Cup, birthdays and most germanely, songwriting. I wrote three new songs for the CD; songs which may have effectively changed the nature of the album. We are now unsure what the title will be. Stay tuned. Meanwhile, here are some of my musings. 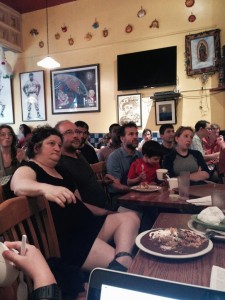 It’s Sunday evening at La Veracruzana, a Salvadorian restaurant in downtown Northampton. My family dragged me here (on a school night!) to watch the US play Portugal in the second round of the World Cup. The restaurant’s main TV is broken, so everyone has pulled tables and chairs toward the west side of the room to see the TV on the eastern wall, craning their necks and jockeying for position in order to watch. My back is to the screen. I am watching the watchers. 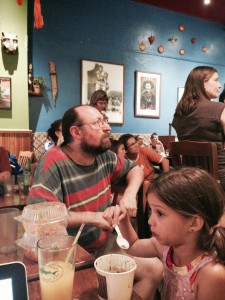 I did slip around at one point to get our dinners from the counter, and this afforded me a good look at the screen. It was still pre-game, and there was a lovely shot from the stadium of the Rio sky, almost violet, with wisps of clouds floating through in the shape of the Nike logo.

“Ehhn, it’s OK,” said the young man standing next to me. He was wearing a black tee shirt and looked a little like Jian Ghomeshi. “Better than Massachusetts. New England skies don’t impress me.”

I pulled down the corners of my mouth. “I like them.”

But, he conceded. “I will say that yesterday I drove back here from Boston. Right into the sunset. Now that was a sky.” 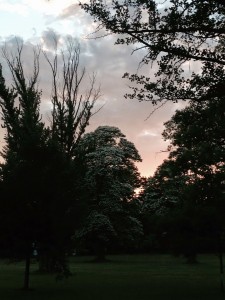 Today in church, Steve preached on two different texts. The first was a parable of the Buddha’s, the one about the guy who comes to a river and builds a raft to cross it. He is so thrilled to have crossed safely that he carries the raft with him wherever he goes. “This is not a skillful use of the raft,” says the Buddha.

Then he preached on the end of Luke 9. Jesus tells a guy to follow him. The guy says, “First let me go and bury my father.”

“Let the dead bury their dead,” says Jesus. “But you go and proclaim the kingdom of God.”

Harsh. But effective. Jesus and the Buddha are essentially saying the same thing: let it go. Move on. Don’t cling. In the Jesus passage, the message is even more direct: get over your parents. Whether they were “good” parents or “bad” parents, get over them. Move on. Live your life.

Jay is obsessed with all things soccer, not necessarily in this order: playing it; watching the World Cup; Messi; and anything that has the Nike logo on it. For those who know my son, it’s just one in a long line of obsessions: The Beatles, cars, birds of prey, guitars, Thomas trains, Ninjago, cheetahs, this band from the 90s called The Nields, Colossal Squid.

The Nike thing started a few weeks ago when we went to Famous Footwear to get Elle some shoes. Jay felt deprived, so I threw him a bone; a pack of socks. I might have noticed they were Nikes, and I might have rolled my eyes and shrugged at my unfortunate choice; the latest in my own long line of eco-transgressions. For many years, Nike has been a target for activists wanting to put an end to sweat shop conditions. Here’s more on why Nike is Bad. I used to do pretty well with my consumer boycotts, but eight long years of motherhood has worn me down.

Besides, the more I oppose him about Nike, the more appealing it surely would be to him. I started on about the sweat shops, but somehow he could not draw a connection between the logo that all his favorite kindergarten pals have on their sneakers and the stories I was telling him about unfairness on the other side of the globe.

And why should I? Recently, I’ve come to the sad conclusion that I don’t get to boss everyone around. I’ve been noticing that without my excellent advice and bits of wisdom, other people do just fine. Especially my family members. Sometime in the last month, the mild voice of my beloved uncle Brian keeps popping into my head. “They’ll figure it out.” That’s my new motto. He’ll find out about bad Nike on his own. We live in Northampton.

My other new motto is, “Everyone is doing the absolute best they can at any given moment.” Even though I might be mightily disappointed with their behavior (or my own), we really are, most of us, doing the best we can with the resources we have. I don’t know if I am right about this, but I do know that when I adopt this attitude, I relax and stop being a pain in other people’s necks.

On the last day of school, Jay announced, “I am going to wear all things that have Nike on them.” He showed up dressed completely in Nike garb, which meant, on a hot June day, he wore a shiny red nylon swim suit top, a pair of navy blue and orange fleecy sweatpants, his royal blue socks, and his sister’s pink and black sports sandals. He could not have been more pleased with himself. Indeed, all items were branded. I looked at him solemnly and nodded. “You are all in Nike.”

He turned on his heel and started out the door; realized it was too hot for the fleecy pants. He ran upstairs and traded them for his favorite pair of Nike shorts, which happen to be hot pink. Satisfied, he left for the day, racing off in his too-big sandals. His last day of Kindergarten. The day before, his class spent all day painting rainbow pride flags. Someone had stolen the school’s Pride flag earlier that week, ripping it down from where it flew underneath the stars and stripes. No problem. The teachers and students of Jackson Street covered the front of the school with rainbows. In the last issue of the JSS Gazette, and 8 year old wrote an editorial about how she thought it was wrong how some people said men couldn’t marry men, or women couldn’t marry women. “Adults should be able to marry anyone they want,” she opined. 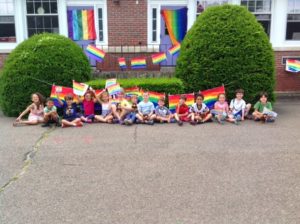 So I let my son go to school in his un-PC Nike wear, not worried about what my friends would say about my logo-worshipping son, nor worried that anyone would tease him for wearing pink sandals. He lives in Northampton. These are some of the blessings. Later in the morning, I joined him and his classmates and some of their parents for a last lunch next to the playground. He was racing around the jungle gym. He saw me, and approached the fence, all big eyes and dirty knees. “Can I keep playing, Mama?”

“Of course,” I said and kissed him before he could get away completely. Kindergarten. Over in a flash. His birthday is at the end of August and he wants to invite Messi. “I know he will come,” he says. “He loves soccer, and I am having a soccer party.” I just nod. Why disappoint him now? That would be just trying to protect him from a later disappointment. If disappointment is inevitable (and it always is, isn’t it?) it’s better to let him have the joy now and the disappointment later. I’m thinking that’s the proper use of the raft.

God Is in the Numbers:Republican Math and Self-Disclosure

I feel for the Republicans. It’s no fun to confront reality after years of believing one’s own math. But of course, I am not a Republican, and this time around,…