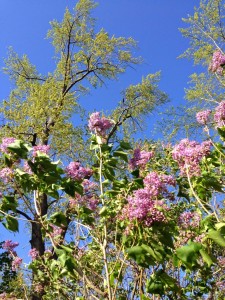 My writing group isn’t meeting tonight, because I got invited to hear Sandra Tsing Loh read at a friend’s house. She has a new book out called The Madwoman in the Volvo: My Year of Raging Hormones. Though I’d generally rather write with my writers than almost every other activity, I wanted to say yes to this invitation. I don’t know from raging hormones (yet) and I like to be prepared for such eventualities. But what I want to write about today is Mother’s Day.

I feel guilty saying this, because I know how hard Mother’s Day can be for those who have lost theirs to either death or illness or painful choice; or for those who yearn to be mothers and aren’t, or who were mothers and suffered the cruelest loss. But I have come to appreciate this holiday, and not just because my kids made me beautiful cards, gave me the day off and just plain exist. I hated it as a child, and in our family it was almost universally ignored until the three daughters became mothers ourselves and started getting cards, flowers (or resenting the lack thereof). Now we regularly thank our own mother. Now we get it.

In church yesterday, Steve said, “Every day should be mother’s day. We owe a debt we can never pay back.” And all of us had a mother, however imperfect. My life was changed when a wiser woman (not a mother herself) shared her own breakthrough: “I realized that the sometimes mean, sometimes crazy alcoholic mom I had was exactly the mother I needed to become the person I am.” That statement set me free as a mother. Whenever I worried that I was wrecking my kids, I thought of this: the mother you get is the mother you need. For better or for worse, my kids got me. And mostly, it’s for better. I have to trust that even when it’s not so lovely–like when I ignore them for my iPhone, or yell at them for not showing up for violin practice–that somehow, someway, God can turn this to good: compost becomes flowers.

At Falcon Ridge, my kids busked with their little violins, and filled their fiddle cases with dollars and quarters. At one point, their cousin shouted “Donations!” to the passers-by. Horrified,…