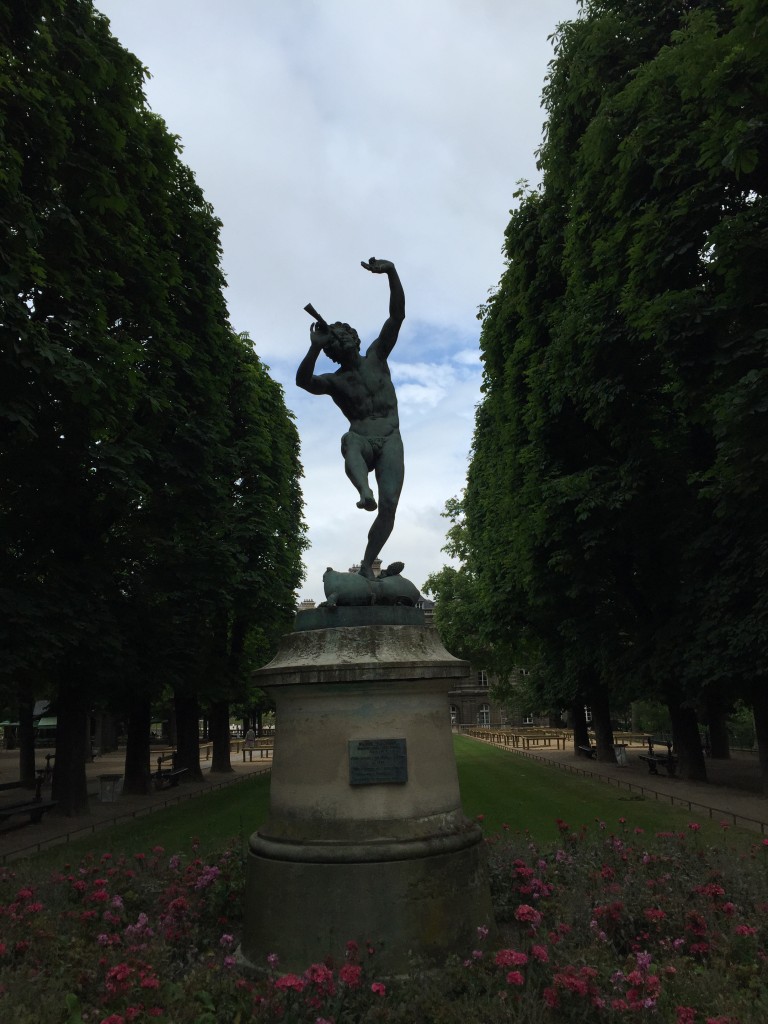 In the middle of the night, both of us aware that the other was struggling to get back to sleep, I heard Tom mutter to me, “We’ll always have Paris.” I didn’t respond; it’s my general rule for insomnia to act as asleep as possible until the real thing returns. But this morning, as I barked at my daughter during violin practice, I thought, “Has it not even been a week since I returned?”

And yet, Tom is right. Paris is in me now, and like a rich, recent dream, I am still able to access it. How does one keep a dream alive? 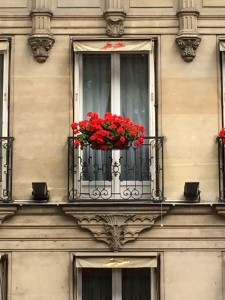 I bought a pair of jeans that I loved so much I bought a second pair right away. I wanted a souvenir that I would wear often. Now I have two.

I took loads of pictures, and now they are adorning my desktop and screen saver.

My iPhone still autocorrects in French.

We did exactly what I’d hoped we’d do: we walked all over town. We slept late. We woke slowly. Every morning, I sat in our living room with the French windows open and wrote in my journal, drinking espresso from the hosts’ tiny red counter top machine. (I loved that machine so much, I asked for one for my birthday). 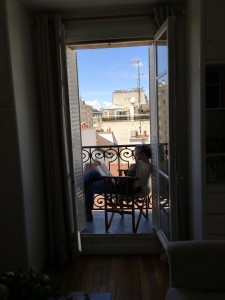 Then we’d text my parents who were on the Rive Droit, and meet up with them for a walk and a picnic lunch. We were museum-cursed. Everything was either closed or partially closed. So we saw some beautiful things, but not so much that we were overwhelmed. Mostly we walked, which was exactly what I’d wanted most. We walked all over town, and we spoke French. One day, Tom said, “Aujourd’hui, on parle seulement le Francais.” And so we did. But after an hour or so, Tom stopped speaking to me. I thought I’d offended him, but later when he was allowed to speak English he told me, “I just ran out of French.” 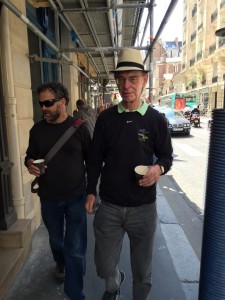 We walked along the Seine. We saw a statue of Charlemagne in front of Notre Dame, which I assumed was as old as Charlemagne. But it was actually built in 1878. 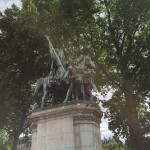 No matter; Notre Dame was built starting in 1163 (just a century after the Normans invaded England) and finished over a century later. The history alone stupefied me. Speaking of history, we ate dinner one night at Le Coup Chou, a restaurant in the Latin Quarter where both the Beatles and the Stones dined post-show. 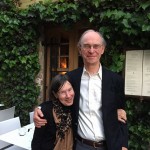 We went to the Rodin museum (closed—but the gardens were open), and I saw this statue of the Burghers of Calais. 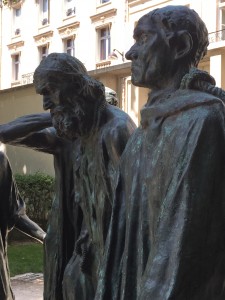 The story goes that in 1347 Edward III of England had laid siege to Calais, a city on the English Channel. During the battle of Crécy, King Phillip of France told the city to hold out at all costs. But the English were starving the people of Calais. Finally, Edward said he would spare the city if six of the top leaders would surrender themselves. They did so, wearing nooses around their necks and holding the keys to the city in their hands. But Edward’s Queen, Phillipa, who was pregnant, spared them, telling her husband that it would be bad luck for her unborn child.

Tom read Tim O’Brien’s In the Lake of the Woods, and on the plane ride home, he read almost all of All The Light We Cannot See, a book which I had started, but only just. I got my paperback copy at Shakespeare and Co the day I went there in search of a piano to play. I found one on the second floor, and played “Normandies” and “Desperado” to a white cat. 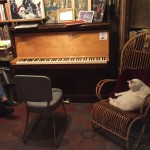 Or so I thought; when I finished playing, I turned to see a crowd gathered. I was embarrassed, and so made eye contact with a three year old whom I made sing “Meunier, Tu Dors” with me. Then we sang “Allouette,” and her mother informed me it was from Breton, and not Quebec as I’d believed. 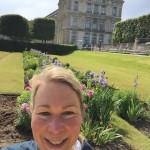 It was interesting to see the way the French people incorporate the royal past into their daily lives; the casual relationship with the Parisian castles. Allons enfants de la Patrie, le jour de Gloire est arrivé…

While I was in Paris, I got some terrible news about some friends of mine. I brought the news to the vast cathedrals we visited: the Eglise de Saint-Eustache, where Moliere was married and Richelieu was baptized. There were posters all around the ancient nave of parishioners to support the priests. There was a list of the priests that went back to the 13th century, starting with names like “Simon” and “Guillaume.” But I was most moved by the Dome at the Hotel des Invalides, where I saw a statue of Jesus. 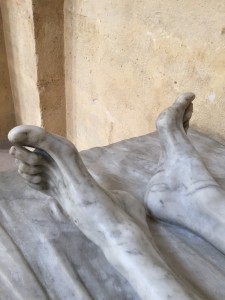 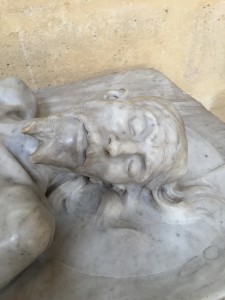 Art was graphic then; as realistic as photographs. It needed to be. And when life is hard, unimaginable, it helps me to see these stark Catholic images from a time when a person’s anguish could be written on his face, on his feet. It also helps to sit in a sunlit cathedral. 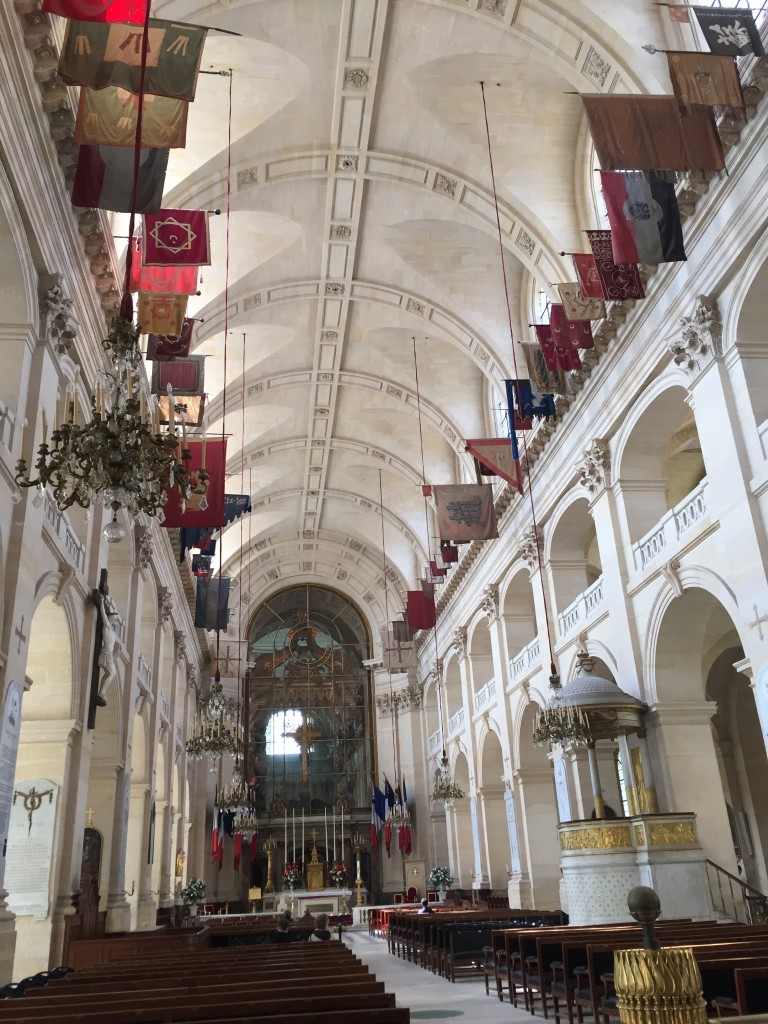 On the long, lovely plane ride home (lovely because the plane was empty and we got to stretch out and nap as much as we liked; lovely because Starbucks in France still sells Tazo Awake tea and not that dreadful Teavana; lovely because for once there were enough hours in the day), it hit me. I was rested! I was relaxed! For the first time since 2006, I was deeply and thoroughly relaxed. I love my kids more than anything in the world. I can, would and have turned my life upside down for them. I want nothing more than to be with them forever and ever. And. There is a distinction between the love I have for them, the relationships I have with them…and the JOB that is parenting. Though I would never want to lose that precious job, it is the hardest job I’ve ever done, and it is relentless. I hadn’t known I needed a vacation from that job until I’d had one. And with any great vacation, I was returning eager to get back to the job.

One of my best friends, a mother of three whose kids are older than mine, told me when mine were babies, “Don’t ever use the word ‘vacation’ when you go somewhere with your children. Say ‘family trip.’ It’s NOT going to be a vacation for you!” These words have helped me immeasurably, and I’ve passed them along to others who concur. I’ve taken lots of family trips since I became a mother, and I frankly prefer to stay home. I’ve had a few overnights; I’ve been away for gigs, and once or twice Tom and I have gotten a whole weekend off. But this was five days. Five. Whole. Days. Now I know what it takes. 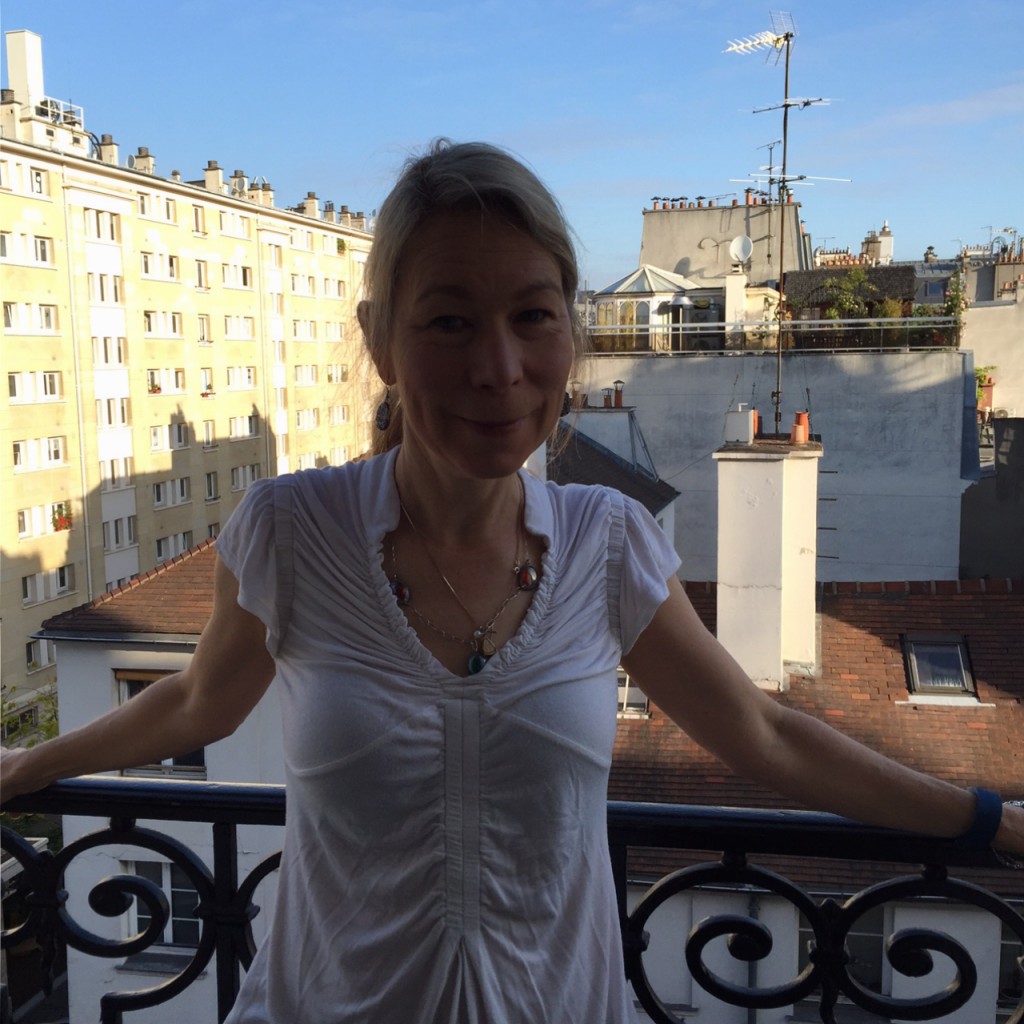