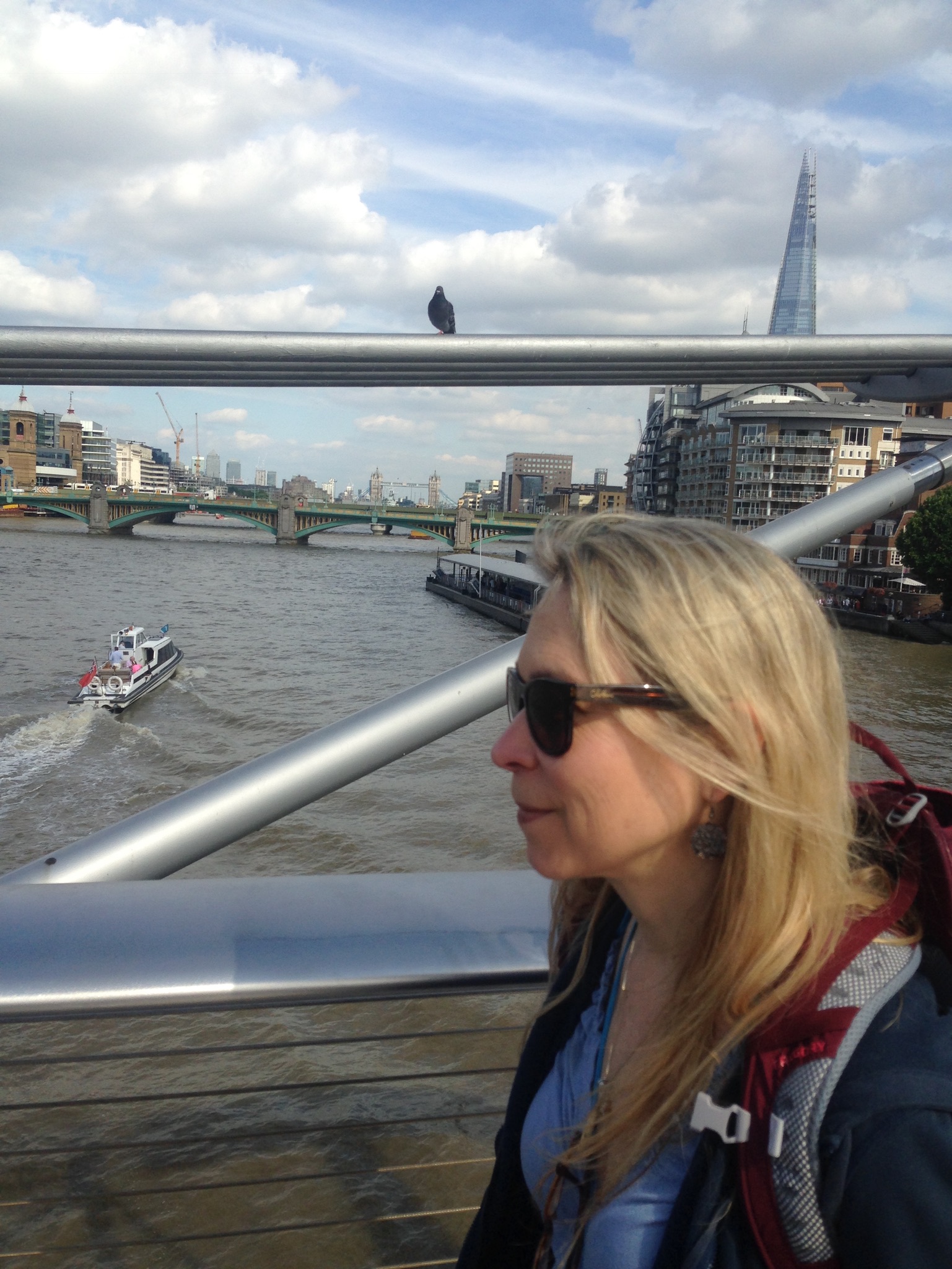 Seriously, that’s what it’s like. We zip in and zip out before the kids can start complaining. No, let me amend that: they complain before, during and after. So far, members of our family have seen from the outside only:

I have to say, I have some compassion for my kids. This would have bored me silly when I was Johnny’s age (8). Even now, fully-grown, an information junkie of the highest sort, I find museums enervating and tedious.  (Though this may be a side effect of the shingles. Or my kids’ moods.) I want to stop at one exhibit and take it in, not zoom from object to object. And I want to spend maybe 20 minutes taking that one thing in and then go home. So I am secretly glad they hate museums.

Except I am very sad I came all the way to England and did not get to see a Shakespeare play! Here I am in front of the Globe. I just had to set eyes on it! Which is all I did. 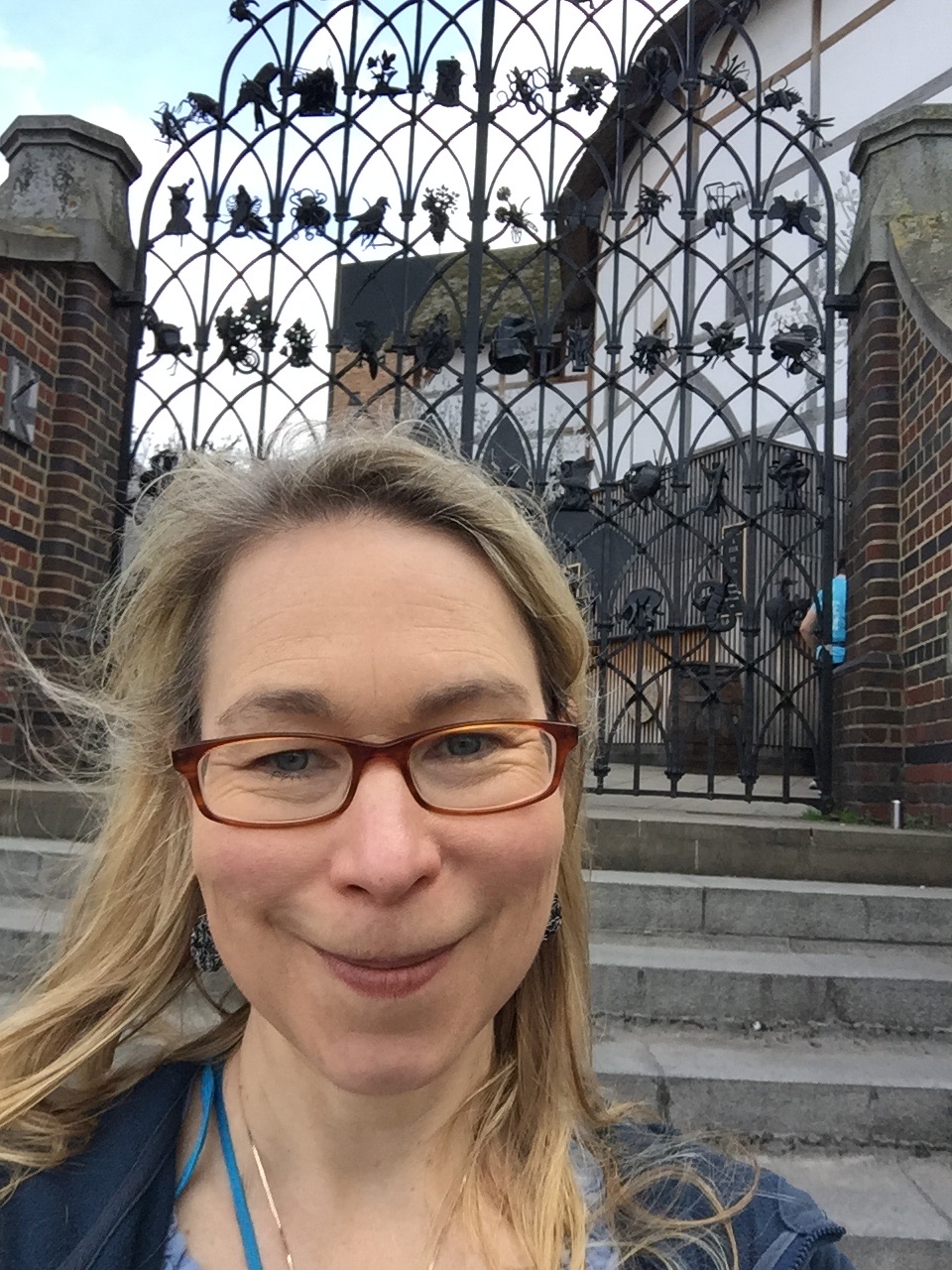 Today was Tate Modern. The building itself is spectacular, and there is a Giacometti exhibit happening now. When we were kids, as I have said previously, my grandmother (Midge Tenney, mother’s mum) did pretty much nothing with us other than drag us to various museums, especially art museums which I detested (until age 14 when I decided I myself was an artist of sorts. Though I always loved the Impressionists, which I will discuss in tomorrow’s post). Katryna, on the other hand, a professional Pleaser and generally delightful person, seemed to love the art museums, and her favorite artist was the sculptor Giacometti, whose elongated skrinchy torsos appeared all over the Hirshhorn Museum’s sculpture garden in Washington DC. It was made much of, Katryna’s love for this artist, as if the grown-ups could somehow infect me with her enthusiasm if they talked about it loudly enough in my presence.

So infected was I that I had to bite my tongue to inform my kids that they would also love Giacometti because all children (except me) do so. Whaaaat? Fortunately, I kept my mouth shut, and they passed by the creepy sculptures in blissful ignorance, choosing instead to terrify me at the 18th storey of the building, where there is a balcony that encircles the entire floor. The views of London are stunning, but I discovered I have a gigantic fear of heights. Not so much fear for myself, but fear for my kids, who insisted on climbing up the rails and leaning over. OK, not really–I was just sure they would if I didn’t howl loudly enough.

The day was beautiful, and we came home on the early side so we could be well-rested for our trip to Paris tomorrow. There are sites planned for Paris: the kids want to go to the Eiffel Tower, and I want to go to la Musée D’Orsay, which was closed on the only day we could go in 2015. But other than that, I am done with sight-seeing. I just want to walk around these two European cities, do some shopping (I still want to find my fab jacket), pretend I am not anywhere epic at all, but merely on a regular vacation, with no stress, and no need to check items of a list, and just veg out. Maybe we’ll go see Despicable Me 3.

The night before last, I came up from my writing group to kiss my daughter goodnight. She was wrapped up in her comforter, reading–as usual. The book she was reading…