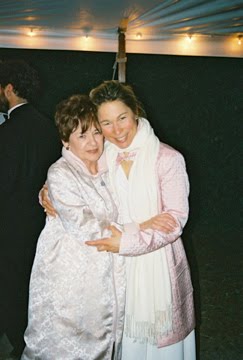 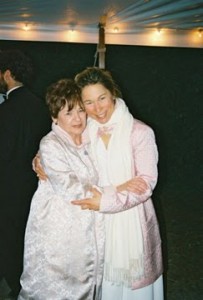 I’m trying something new. I’m speaking rather than typing. Can one even call this writing? We’ll see. As many of you know, I have carpal tunnel syndrome and an additional annoyance known as DeQuervian’s Tinosynovitis, a condition caused primarily by breastfeeding a large child while simultaneously “mousing” on a powerbook. In short, it hurts to type; the kind of hurt that is as much about the fear of making the injury worse as it is about the pain in itself.

I haven’t written, really, since February. And even then, all I did was videotape my new songs and post them. I haven’t really written anything since the church burned down.

The church burning down — that seems like a different age. Since then, the seasons changed dramatically in more ways than one. On February 9, my mother-in-law Mary Duffy got a flat tire and ended up having to walk a mile into town to get help. She was hale and hardy, three weeks away from her birthday–I am sworn to secrecy about her age, but I will say it was a good round number. The next day, complaining of stomach pains, she was taken to the hospital. On the way she fielded a call on her beloved Bluetooth, which never left her ear. She was a realtor, and in the middle of an important sale. At one point during the conversation, her client said, “Mary, I’ll have to call you back; I can’t hear you over that ambulance in the background. I’ll wait until it dies down.”

Mary, without missing a beat, said, “Oh no, honey. I’m in that ambulance.”

Three days later, the doctors gave her the bad news: pancreatic cancer. One month to the day after that, on March 13, she died in a hospice in Natick Massachusetts. Oddly, I have had the word Natick on my calendar on March 13 for the past eight months. We were scheduled to perform at the Homegrown Coffeehouse in the Unitarian Universalist Church on Highland Avenue that night. Driving my husband in the pouring rain to his mother’s deathbed, I was on the verge of canceling the gig, but Tom said he needed to hear us sing. And knowing somewhere in my consciousness that music heals, I agreed.

At the concert, as per her daughter’s strict instructions (“Mimi wouldn’t have wanted you to cry”) we didn’t say anything about my mother-in-law’s passing until the end of the evening, when we did “Ain’t That Good News, “ and got the entire audience to sing along with us on “Oh Mary Don’t You Weep Don’t You Mourn.” For the encore, even though it was still technically winter according to both the weather and the calendar, we sang the “May Day Carol” in honor of my mother-in-law’s gift for gardening.

Tom and I met in December 2003. I had recently been divorced and had spent the past couple of years dating lovely man that I just couldn’t go the distance with. I realized that fall that I was never going to connect with anyone who didn’t have some kind of a spiritual background. I didn’t care if he was Muslim, Buddhist, Hindu, Jewish, or even a Jungian agnostic, as long as he was a seeker.

In his post on match.com, (yes, we really did meet on match.com) he wrote, “Here is something that’s new for me: I’ve recently gone back to the Catholic Church. If this is a turn-off, read no further.” Catholic? I could go with that. Even though I was raised Presbyterian and was becoming more and more convinced that my spiritual path was as Buddhist as it was Christian, I had great respect and love for the Catholicism modeled for me by my aunt Jenifer’s husband Brian. It was Brian who gave to me for Christmas the year I was 16 a book by the Catholic priest Henri Nouwen. The book was a kind of meditation on prayer, as much about the black-and-white photographs of Amsterdam and her people as it was about God, and I was moved by this book so deeply that I vowed to follow Father Nouwen to the place where he was purported to be according to the information on the book jacket: Yale University.

Anyway, I winked at Tom, he asked me out for coffee, and the rest is history. For the first few months of our courtship, we attended St. Mary’s Catholic Church in Northampton, a church he had found through another strange connection. Interested in his mother’s devotion to this new group called Voices of the Faithful Tom, at the time a journalist for People Magazine, tagged along with her to some of their meetings, and in the process became hooked himself. He did a radio piece on Voices for WFCR and received a phone call shortly after from a woman named Ann Turner. Ann had hunted him down, and when she got him on the phone, said, “You must come to church with me and my family.”

For a few months, I thought it might be in my future to convert to Catholicism. But it was 2004, and Massachusetts had just legalized gay marriage. Our priest began to make noises about this, and that was that. Tom and I discovered our sweet little Congregational-cum-Taoist church in West Cummington, where the minister wore a gigantic button that read, “Marriage is for Everyone.”

But I still maintain great love and respect for Catholics, for Thomas Merton, the Berrigan Brothers and all my dear friends who believe, if not for the institutionalized church itself. And I knew that my mother-in-law sang in the choir at St. John’s in Wellesley, continued to support Voices of the Faithful through all sorts of activities, including everything from marching with them to organizing paperwork. When I asked her about her spiritual life during those last weeks, she said, “Oh, I speak with Sister Evelyn all the time. She’s wonderful. God is so good to me, Nerissa.” So when Tom found out that the priest—Fr. TomPotter– who had been so instrumental in supporting Voices of the Faithful would only be available to conduct the funeral on Wednesday, March 17 — better known as St. Patrick’s Day — and his sisters protested, in part because they would have to reschedule a caterer (no small feat in the Boston area on St. Patrick’s Day), he went to bat for Sr. Evelyn and Fr. Tom.
I happen to mention this on the phone to my aunt Jenifer and my uncle Brian, as part of my conversation with them to let them know about Mary’s death.

“Sr. Evelyn Lowen and Fr. Potter for my spiritual advisors at Harvard!” said Brian. “They were there when Voices of the Faithful began, and they’ve been nurturing it along ever since. I’m sure it’s the same people.”

Hearing this, I had chills. I brought the telephone downstairs and confirmed with Tom that indeed Sr. Evelyn’s last name was Lowen. And I remembered back to being a teenager, sitting around Brian and Jenifer’s kitchen table, talking about liberation theology, Fr. Nouwen, Thomas Merton and my newfound faith. There are angels hovering ‘round, indeed.

Throughout this period of time– the bullet train that is pancreatic cancer, the shock of losing a parent, the confusion about how to talk to my children about the loss of a grandmother–I have been buoyed by that faith that I discovered amid the black-and-white photos of modern day Dutch in prayer 25-odd years ago. I thank God — the God of my understanding — every day for connecting me to my husband, not just through the passions of our hearts and bodies, but by our shared desire to understand all these things, seen and unseen.

Mary died in the middle of a nor’easter. The wind howled as loudly as we did at the foot of her bed. On the day she was buried, the sun shone on the garden in her backyard, the garden she had spent over 40 years cultivating, the garden that is perhaps more purely her, more alive, than anything else she left behind. One of her daughters made sure that she was buried with her Bluetooth. When Lila asked me why people had to die, I pointed to the trees and bushes and flowers in her grandmother’s garden. “See those trees? And see the way the land rises over there? This whole garden, and all the trees around here are alive because people and plants and animals died and their bodies went into the ground to feed and support new trees and plants and people and animals. That’s how it all works. We take turns.”

Also I told her that her grandmother was up in heaven reunited with her grandpa. Because that’s what Mary would’ve wanted me to say. That’s what Mary believed: in fact, a week or so before she died, she told my parents that she thought we’d all meet again in heaven. “And if I’m wrong… I’m going to be really angry.”

It’s what I want to believe, too. I miss you, Mary. We are going to meet again in the kingdom. That’s good news.

I am not easy with the summer solstice. I am not like my friends who, last week said, “Oh Tuesday? Isn’t that the solstice? I don’t want to make plans…

I just finished running a writing retreat here at my house, affectionately called “Big Yellow” by the marvelous cast of writers who have been coming, practically en masse, since 2005….