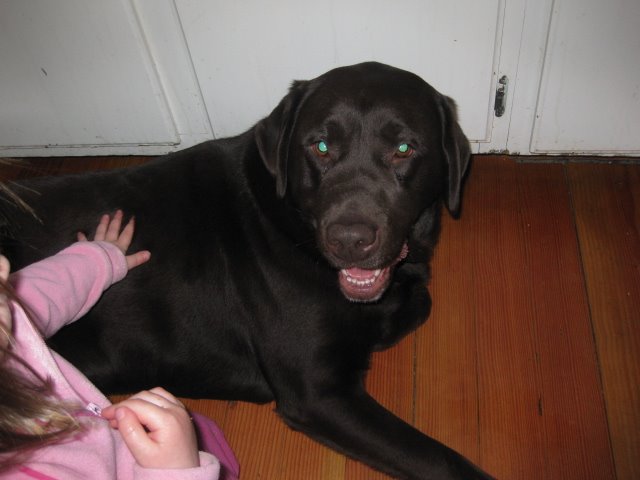 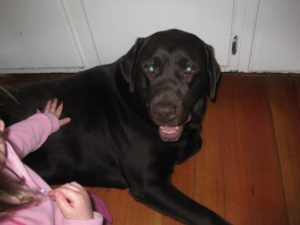 We have decided to get a dog.

Before you take the trouble of logging in to tell me how this goes against everything I wrote about last night, about working against my Grasping type and my recovery from busyness, please read the following as a kind of apologia.

Tom came home from work last week and said, “I know this is an insane idea, but there’s this dog named George who needs a home.” George is a three-year-old chocolate lab who has been trained as a therapy dog, which means he has been brainwashed to allow kids to scream and yell and maul him and to respond by blinking his big coffee-colored eyes and roll onto his side. The center where Tom works paid to have him trained, but the dog needed a home and an official owner. Tom would take him to work everyday, 9-5. We would let him romp in our (almost) fenced in back yard. He’d be almost no trouble at all.

My first response was this. “That all sounds manageable, but the part I can’t quite swallow is just the idea of having to cut one more slice out of the family love pie. I feel like we’re all squeezed to the max emotionally. Lila and Johnny both seem to need more and more attention as they get older, not less. And hello! What about me and my need for attention! If we get a dog, you’re just going to put him in your truck and take off and go hiking with him and leave us behind.”

“Yeah, but the dog will give us an excuse to get one. In fact, that’s another thing. We don’t have a big enough car for two adults, two kids in car seats and a big brown dog. Where will the guitar go?”

“I know it doesn’t make any sense. But I still kind of like it,” Tom mumbled.

“I like it too,” I said. “But absolutely not. No dogs till both kids are potty trained.”

That was a good point. My line has been, “We’ll get a dog when both kids are out of diapers.”

I love dogs. I have had dogs for most of my life. Our beloved Aussie, Cody, died while I was pregnant with Lila, and I assumed at some point we would get another dog. But the idea of training that puppy keeps stumping me. In what faux future would anyone in our family be able take the dog to Puppy Kindergarten? Who would clean up the messes?

“I just can’t have another creature I’m supposed to take care of,” I said.

And that was that.

Until that night. Katryna and I were on our way to the Circle of Friends coffeehouse gig in Franklin MA. The sun was setting, and a family was out walking their chocolate lab.

“That reminds me,” I said. “We almost got a dog.” And I told Katryna about George.

“Are you crazy?” she said. “Why wouldn’t you get that dog? Therapy dogs are the best!” And I thought again about Puppy Kindergarten, house breaking, crate training–all that we wouldn’t have to do to get a dog who would be better trained than any dog who went through the Nields-Duffy method of Dog School.

And suddenly I remembered something. Two summers ago while I was trying to get pregnant with Johnny and being disappointed month after month, I drew a picture of my family in order to manifest my reality (yes, I watched The Secret). In the crayon picture is an image of Tom, Lila and me, holding a baby. Next to Tom is a big brown dog with floppy ears.

I am not a chocolate lab fan. In fact, I think of them as the kind of big dumb clumsy dogs I eschew in favor of shepherd types. I grew up with a beautiful golden retriever, but she was pretty dumb too, and she also bit. So it was sort of weird that the dog in my picture was a chocolate lab.

Also, I found this picture of me in my iPhoto file. This was taken in 2004 at a house concert we did in St. Augustine, FL. The dog’s name is Sweet Pea, and as you can see, I fell madly in love with her. 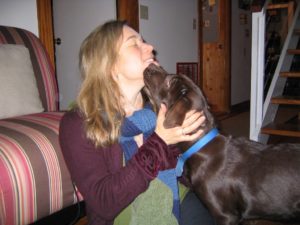 So I came back from the gig and asked Tom if the dog was still available.

“Oh, I was just thinking it was a bad idea,” said Tom.

We spent the next week thinking about it, going back and forth. I anticipated that George would be a lot like Nanna from Peter Pan. He would probably potty train Lila and soothe Johnny to sleep at night. I asked God to send me a sign, like perhaps show me a terribly behaved chocolate lab, or a particularly lovable one so that I could make an informed decision. We also asked Lila if she wanted a big brown dog named George.

“No,” she said holding her hands about five inches apart. “I want a teeny tiny little dog named Mia.”

“We need to stay open-minded about this,” I said to Tom, but also mostly to myself. “If Lila isn’t down with getting a dog, we can’t do this. After all, she’s just had her world rocked by the addition of her brother. Who is now crawling. She’s going to have to compete with two four-legged creatures now.”

Today George was scheduled to come over for a visit. This morning during my run, I saw a woman walking a chocolate lab in the park. I knelt down and patted her ears. They had that soft-as-silk texture. I reached my hands into that peculiar waterproof lab fur around her neck. The fur seems to go one forever, deep into her body. It felt right.

When we introduced George, Lila’s face immediately broke into her sunniest grin and she threw her arms around his big thick neck. She then proceeded to shepherd him around the yard, and when he took off after some scent, she pursued, saying, “Here George Harrison, here Buddy!”

Some of George Harrison’s other commendable traits:
-he doesn’t bark. At all.
-he doesn’t climb on furniture
-he doesn’t jump up on people when he meets them
-when he finds something interesting on the floor and picks it up, and you say, “Drop it!” ––he will, and then walk away.

We are going to call him George Harrison so no one thinks he was named after the last president. Also because George was the Quiet Beatle and he is our Quiet Dog.

After Lila had proclaimed George a member of the family and Johnny had vetted him thoroughly (and gotten a big wet kiss on his face), I sat down at my computer to write about our new addition. George flopped down by my feet and promptly fell asleep. I am reminded of what was so good for me about having a dog. Dogs know how to relax. Especially this one. His energy may be just what this family needs. He will be an excellent teacher.

As I write this, the Dow has just plunged to its latest lowest low, which means the small amount of money I have managed to squirrel away for our retirement…

Thanks to Amanda Soule, I got the idea to make Lila a sewing card. My ulterior motive was to buy myself some knitting time, but that didn’t work. Also, Lila…