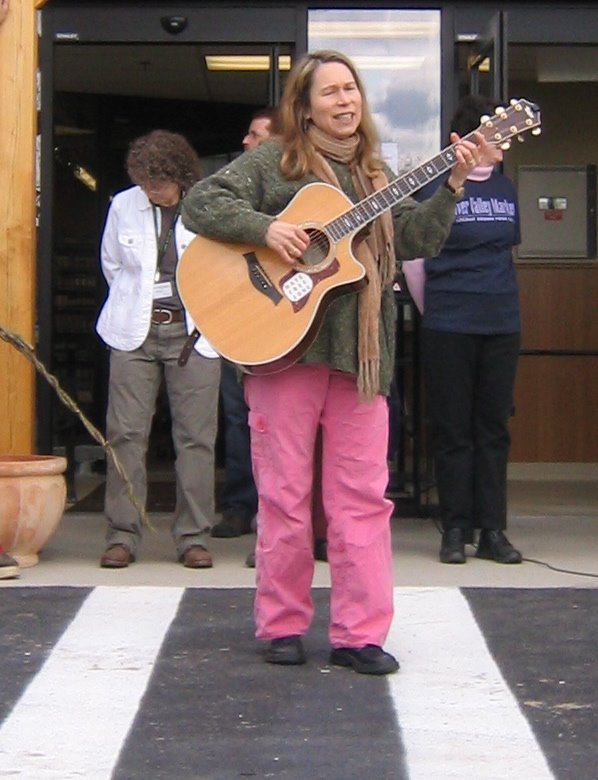 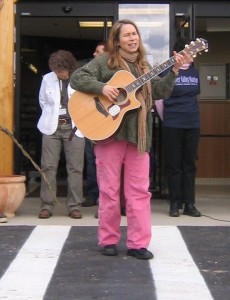 Me last year at this time. I am singing “The Harvest Table” in honor of the opening of River Valley Market, our local co-op which just celebrated its one year birthday on April 30, Katryna’s birthday too! Notice my grimace. This is because of my S-I joint pain. Also that it was about 40 degrees.

My aunt Laura, by far the most practical member of our family, told me when I was in my late teens that she didn’t believe people ever really changed. She said it matter-of-factly when I was telling her about some friend’s father who had left my friend’s mother but was working on reforming by going through a bunch of therapy, changing his diet, practicing meditation–you know: the whole “reinvent yourself” kick that life coaches like me exploit to pay our grocery bills. She said, “I don’t think people ever really change. I think they are born a certain way and they may lean in one direction or another in an attempt to change, but they never really do.”

I found this attitude depressing and scary, and also convincing, given what I’d seen up to that point. Certainly, it seemed true for myself. I was always trying to improve myself, specifically to be nicer, more generous, and to have thighs like a young colt instead of the curves God gave me. Deep in my heart, I knew my thighs were supposed to look the way they looked, but that didn’t stop me from buying every magazine that had an article displayed on the cover purporting to give me thin thighs in thirty days. (Yes, I also had that famously horrible book, too, the one with a pink background and a shot of a woman’s rear with upper legs that resembled Bambi’s.)

Yesterday I went to my physical therapist to check out why the pain in my sacro-illiac joint had returned. I had developed this pain at almost this exact time last year when I was about six months pregnant. It was so bad when it first came on that when I tried to walk with Tom and Elle around the block on the first warm night of spring, I only made it a quarter of the way before I had to hobble back. It was so bad, in fact, that I contemplated crawling back. I had to stop picking up Elle, carrying anything heavier than a plate of food and any form of exercise other than this one stretch that the PT had me do. (It was lovely. I got to lie on my bed with one leg stretched out and the other dangling backwards off the edge. I got to count to three hundred in this position. I love any exercise that I get to do on my back while lying in bed.)

Every time I went to PT, they would adjust me, and for two months straight I could feel the adjustment go out of whack within twenty-four hours of my treatment. Then, all of a sudden, it stuck. And I was fine.

This whole event––loose joints that go in and out of whack–– is fairly common in pregnancies when the ligaments stretch and loosen to prepare for the Big Push, when something the size of a large grapefruit has to get through something the size of a drinking straw. As the PTs dismissed me sometime in late June, they cautioned,”Be sure to come back after you have the baby because you’ll stay loose for awhile, but after six months or so you’ll start to tighten up ,and after that it will be much harder to adjust you.”

This I know. I have a dear friend who has miserable S-I problems and has to see a chiropractor weekly, and for exercise she has to swim. I hate swimming.

So anyway, the pain has been threatening to return, and by that I mean every once in a while when the weather is moist and clammy, I get A. a migraine, B. pain in my left foot which I broke in 1997 falling of the stage at the Music Farm in South Carolina, and C. now, pain in my S-I joint. So because I don’t have enough to do, I called and made an appointment to see my old friends and get checked out. Partly I wanted to show off my kids. So I brought them along, forgetting that it was 1:45 pm and their nap time. Also forgetting the diaper bag, so Jay was drenched from the waist down. Nevertheless, they had a blast riding up and down on the mechanical bed (Elle) and crawling around underfoot and barely avoiding getting rolled over by the stool on wheels (Jay).

The PT told me that I was indeed misaligned, and she fixed me, but she also tested my core strength and determined that I have weak lower abs (still recovering from the pregnancies) and abnormally poor upper-body strength as the result of carrying way too much tension in my upper shoulders. This is because I spend most of my life hunched over in a C position: playing guitar, typing on the computer, breastfeeding, driving, knitting. She gave me four exercises and helped me get my wet and tired children out of the hospital and told me to come back next week.

I’ve had poor upper-body strength my whole life. I’ve always had great lower-body strength, thanks to my non-Bambi-like thighs (which I now love, by the way). My mother and sisters were those kids who could do fifty pull-ups on the horizontal bar in PE class. I was the one who couldn’t even do one. I still can only muster about ten push-ups, and only when I am doing the cheaty kind on my knees. I go to bed every night with pain between my shoulders, and it it definitely worse these days from carrying two kids up and down the stairs, pushing a double stroller, sitting on the floor and creating Duplo Princess castles, and of course breastfeeding. Many nights I take two Advil to dull it before sleep. Yes, I get massages, but while they feel great in the moment, I am even more sore the next day.

But here’s the thought I woke up with this morning: What if I really try to change this aspect of myself? I don’t need to become Strong Lady; I just want to have less pain. What if all it takes to improve the situation is a little more mindfulness and a devotion to these four exercises my PT gave me which are:
-lower leg lifts for my lower abs
-the lying-on-your-back side twist you all have probably done in a yoga class at some point
-the Swan (that’s what it’s called in Pilates. In yoga it’s like upward dog, only you do it five times in a row without your hands helping you, and you do it over a big exercise ball)
-simple shoulder circles.

Plus, to just stand up straight and pull my shoulders back and my milkful chest forward whenever I think of it.

Yes, we are who we are, and one of the most powerful things I’ve learned is that acceptance of what and who we are can be one of the best, most amazing gifts we can give ourselves (and our children). But I also know there are things we can change. I’ve seen it too often to continue to agree with my aunt. The life coach in me has seen so many people set and achieve goals that I firmly believe that if we can set our intentions (deliberately, humbly) on something, we can manifest it. And even though I will never be a marathon runner or very fast, I get to call myself a runner today simply by virtue of the fact that I show up for my 23 minute run. Even though I will never be Martha Stewart or Amanda Soule, when I set my intention to declutter my house and do crafts with my kids, I can do it. Parenthood has been a wonderful teacher along these lines; six months ago I thought I was a terrible storyteller to my daughter; that I was incapable of play. It’s still challenging for me, but today I show up for it and do it imperfectly, but I do it consistently, and I do it. Maybe what my aunt meant was that we couldn’t go from being a no-talent loser to being Maria Callas, but I no longer need to be Maria Callas. I am happy to just be me.

So this month, I want to do an experiment. I want to see if by taking small actions (these four exercises) and adding mindfulness (reversing the C position when I notice I’m in it) I can lessen the pain I am in. And you will be forced to witness this. You can thank me later. Feel free to write in about any commitments you want to make to yourself in terms of change, and I will witness you too.

Gotta Get Over Greta Greta was our first big major label release. This is taken from the songbook we published in 1997. Greta began in the fall of 1994 when…

Many of you have asked about our garden. A picture is worth a thousand words, so I have taken a picture of our two, count them 2, eggplants. We harvested…