The night before last, I came up from my writing group to kiss my daughter goodnight. She was wrapped up in her comforter, reading–as usual. The book she was reading was a novel published in 2005. The author was myself. 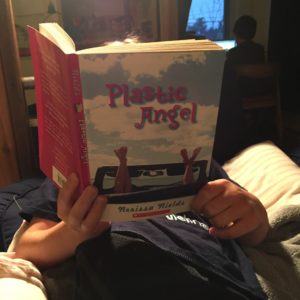 I’ve been waiting for this day without even realizing I was waiting for it. I have wondered, now and then, how old she’d be when she finally read my book. Now I know: exactly nine-and-a-half.

I climbed into bed next to her and cuddled her, and she turned sideways, so that I was reading over her shoulder. She was about a third of the way into the book–a Young Adult novel called Plastic Angel, which is about two girls who rescue each other from their own family troubles through the vehicles of music and performance. The book was published by Scholastic, and we released a soundtrack to go with it, back in 2004. It took me three years to write that book, during which time I moved from Hatfield to Northampton, started my writing groups and retreats, and most importantly, met and married Lila’s father and began the process of making a home for her and her brother.

I read along with her for awhile, and was surprised to see how much the author of the book had not changed in the (well over) 10 years since she’d written these words. The voice of the narrator–a fourteen year old girl–was as distinct as I’d remembered, and it was interesting to see how much I had identified with her when I was a thirty-something single, childless woman. I still identify with her, even though now I am a forty-something mother, and older than the narrator’s mother by quite a lot.

“Do you like the two girls?” I whispered into my daughter’s hair. She nodded and absently pushed me away, which I took to be an excellent endorsement of my book. I said, “You know, the book I am writing now is about the band these guys are fans of.”

“Yes, Mom, I know,” she said. And with that, I kissed her goodnight and let her be with a wholly separate part of me. Me as a fourteen-year-old. Me as a thirty-something single writer.

It’s bittersweet, this new era of parenthood, where I no longer read my kids to bed every night. We still read to Johnny, but even Johnny is occasionally grabbing Harry Potter 3 and turning on his side to let the words go straight into his brain rather than filtered through our voices. He has grown-up front teeth now. He can almost say his “l’s” and his “r’s”. Yesterday when I chaperoned his class trip to Crimson & Clover farm, he refused to hold my hand, and instead hung with his buddies. Lila makes her own lunch. They bike to and from school. And as I watch them spiraling up, up and away, so strong in their wiry bodies, swinging to the tops of the trees and surveying the land, it is hard not to curl up into a ball and weep for the sweet interdependence we’ve lost. And it’s easy to clap my hands and stomp my feet with approval, too.

The antidote seems to be this: I am reading to myself now at night. That comfort I first found when my own parents left me to tend to my younger siblings is back to comfort me now that my kids don’t need me as much. And what riches there are in the books I’ve been reading! (Marilynne Robinson, Atul Gawande, Greil Marcus, Richard Rohr and Ta-Nehisi Coates are all on my bedside table right now.) I am finally back to writing my own book, after a long hiatus. Now I have to consider the fact that my daughter might be reading it one day. I am getting up early every morning for the month of November, swigging my espresso at 5am to face the manuscript and wrestle with my scenes. It’s not as fulfilling to me as snuggling with my kids, but it is another kind of parenting. 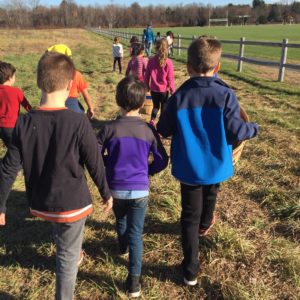 Last day of retreat. I hate when retreats end. I want more time to write, and to listen to these amazing people who somehow find my house and the circle…

I look out at my garden these days and drink it in, knowing that by Saturday morning it will likely be gone. All that work in September. Worth every bit…

How to Clear Your Clutter, De-Squirrel Your Attic and Find the Inner Architecture of Your Novel

We have squirrels in our house. I didn’t want to tell you this, as it creeps some people out and many of you reading this blog have actually come to my…