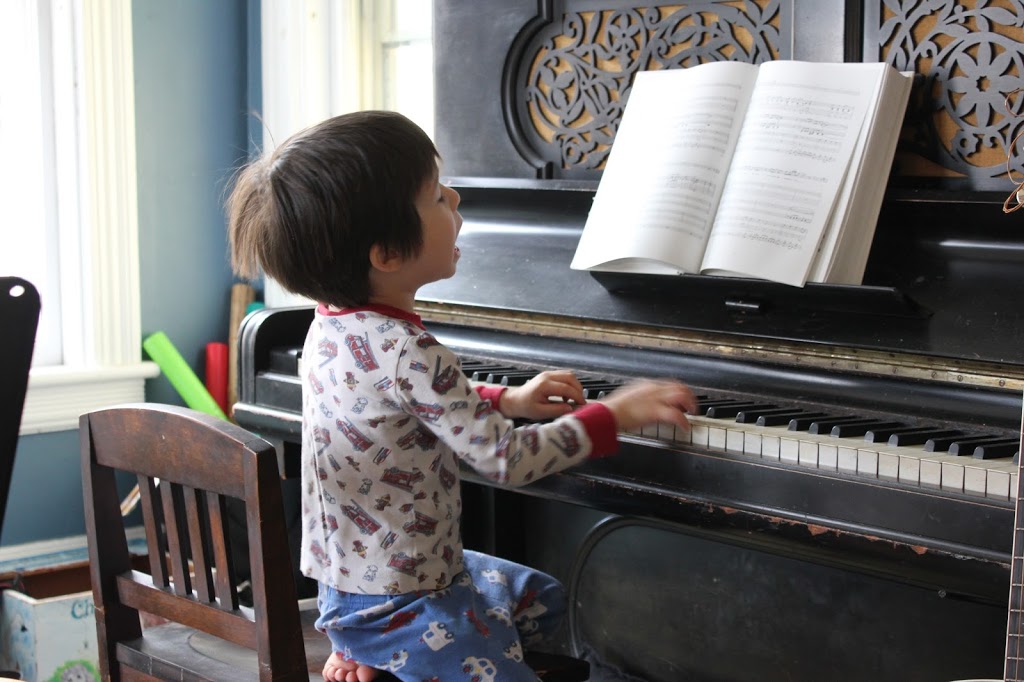 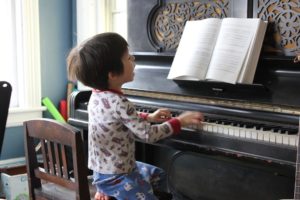 I’ve figured out one sure sweet pleasure. On occasional Mondays, I unplug my new Hofner bass, pack it up and drive into town with my Beatles scores and head down to a basement cubicle at Downtown Sounds, our town’s remarkable little music store. Here I find my teacher, Doug, a 60 something lap steel genius. The two of us choose a Beatles song; he plays guitar and I, with my now mandatory reading glasses, stick my face deep into the Beatles tome and pick out the tablature for the bass line. We started with “Help!” and stalled at “With a Little Help from my Friends”–too hard. We backtracked to “I Want to Hold Your Hand,” which has a juicy little chromatic bass riff (after “I think you’ll understand…nier nier nier nier neet…”), “Hey Bulldog,” “Lady Madonna,” “Eight Days a Week.” And today I learned that totally wild “Come Together” part, complete with bass slide at the 12th fret. I figured I was ready to try again on “With a Little Help.” I stuck my nose back in the book, but quickly found I didn’t need to. I found the melodic line sitting neatly in my memory, and I was, with all those other songs behind me, able to find the notes myself on the bass. Progress!

It’s March 4 today–my mother-in-law would have had her 83rd birthday. She’s been gone now almost 3 years, and today is one of those heavy days where my internal organs all feel constricted and hard as iron. The wind blew with surprising ferocity as I left Downtown Sounds, and the elation from the bass playing blew away down the street. Perhaps to counter this, I bought a new iPhone 5 and gave my 4 to Tom, which necessitated a lot of stupid wasted minutes reprogramming, trying to remember passwords, and surrendering to our daughter who begged to play on the AT&T store’s iPad.

I’ve been in a funk about technology, noticing how addicted we all are to our various devices. I want to throw them all away, even my brand new iPhone, which already strikes me as a disappointment, and go back to communicating through smoke signals and tin cans with string.

It’s probably good that I am already done with my new iPhone. As addictions go, this one must be pretty weak if it’s already lost all its pull. But still, I need it, just as I need the morning’s coffee or risk a killer headache. Gone is that sharp awake feeling I had when I was a caffeine virgin. Now I just drink to maintain the dull high. The tremendous thrill from opening that crisp rectangular box and tremblingly raising the tiny piece of technological perfection to my eyes was obscured by the annoying reality of having to buy all new cables for the damn thing. But then I thought, “Ooooo! A trip to the Apple Store! Maybe I should get the new iPad mini!”

February Album Writing Month was a half success. Meaning for the first half of the month I worked on my songwriting, and for the second half I completely abandoned it. I did accumulate what Katryna has termed song “starts”–the way one “starts” plants in March–tiny green dots in a black soil landscape nestled in trays on your window seat. That’s what I have, and I don’t even have the requisite 14. But mid-month I was seized with a desire to bring to completion a project I’ve wanted to do since 2010: a revision/new edition and ebook version of How to Be an Adult (2008, Mercy House). I went to Kripalu for President’s weekend and spent an entire 48 hours with my face bent over my computer and print-outs. So much for a relaxing yoga retreat. But work–when it’s cranking, when I’m really writing, when it’s all flow–is actually relaxing for me in the same way that playing Paul McCartney bass lines is relaxing for me (or so I believe, anyway). I left Kripalu invigorated, and moved immediately into a solo parent stint with both kids (and Katryna and her kids) in Florida. This I had no illusions about: I knew a trip to Florida without my husband would be more like boot camp than a proverbial day at the beach, and as I’ve shared here before, I am not really much of a beach gal. I don’t like to swim, am cold unless the water is warmer than my body temp, and I don’t know how to just sit back and chill. Like many of my artist friends, I don’t really know how to play. I can be playful; I can laugh; I can make others laugh. But sometimes I have to work at it. Forgetting how to play is not conducive to songwriting.

I did pretty well, actually. It helped that Katryna was with me and that she has given up her iPhone for Lent. We supported each other in our efforts to put down the drug. And our kids got into the act too. “No cell phones!” They’d moan if they caught us reaching for the cigarette-pack-sized thing. And cigarettes are a good metaphor. At the airport on our way home, our flights were delayed. The entire airport was full of people bent in that tell-tale position over their devices, lit weirdly by tiny screens. It was all very 1960s Mad Men where everyone in any context is lighting up. Only we light up with fluorescence, not fire.

I have no idea what kinds of songs I should be writing. I’m at a complete loss. Partly this is because sometime in early February Jay (who is now four and a half) discovered the Nields’ back catalogue and has been spinning the disks 24/7. He became obsessed with my ex-husband David and pelted Tom and me with questions about him (he still doesn’t know that David was my husband once, or what it means that David’s last name is Nields–a name Jay shares with him. He is more interested in the fact that we had 3 Daves in our band.) But hearing our old music ad nauseum (and I really mean ad nauseum) has made it hard to write. Mostly because I think the old stuff is pretty good, and I’m reminded that I’ve said a lot already. Is there anything more to say? Right now, what seems to need saying is that 20 somethings should know how to cook brussel sprouts, and that it’s harder than it used to be to qualify for a mortgage; and that they should know that if they have a dream for their future, they should go for it, but to be prepared for the eventuality that it might end up looking very different from what they imagine.

In my little ministers’ Bible study last week, we looked at Luke 13:1-9, which talks about how bad things happen to good people, and how it has nothing to do with God’s love for them. God isn’t punishing the wicked and rewarding the good. We all know this at some level, even as we worry about our karma. The passage underlined for me the importance of being useful. Jesus is saying no way does God doesn’t cause bad things to happen. But Bad Things are our wake up call to realize that life isn’t about what we can get out of it (which is my orientation, by the way. Part of me always believed that bumper sticker from the 80s that says “Whoever dies with the most toys wins.” Hence the iPhone obsession.)

Life is sucky when we orient that way, though. It tastes like yesterday’s coffee after awhile. Life is much sweeter when we see what we can put into it, what we have to give. The CD that I most like hearing (and the one Jay has most recently discovered) is our 2007 release Sister Holler. Those songs were written to order for my sister and my parents and the new church Tom and I had joined. Those songs have always struck me as useful. I’m not saying there’s no use in our older songs (and I’m not even saying art has to be useful! On the contrary! Is there any use in “With a Little Help From My Friends?” “Come Together?” well, actually, yes, a ton of use. Was it useful that today I played?) But there’s a part of me that just wishes I had that album still to write. Or that I could write a neat sequel.

I completely forgot to register Jay for kindergarten. As I was putting dinner on the table and about to sit down with Tom, he reminded me about it. I threw down my napkin, dashed out of the house and jumped in the car, and as I drove to the school as the sun was setting, I thought, “I’m afraid I’ll never write another good song again. I’m afraid I’ll never do anything useful ever again. I’ll probably spend the rest of my life never doing anything of note, just being me.” Once again, the sky, all mottled and purple and blue, glowing with the backlit sun, seemed to say, “So? Do you think I love you because you’re a songwriter? Don’t you think I’ve loved you ever since you were a tiny baby, just like you loved your own little babies? If you never did anything, I’d still love you just as much as I do now. I’ve always been in your thrall. Do you think you have to accomplish anything more to be loved? Do you think you have to accomplish anything ever to be loved?”

Grace, I thought. Amazing grace. Right. And I breathed a few breaths and made it to registration on time. And then, as soon as I was back in my car: Yeah, yeah. But what am I going to write next?

Sanity comes in tiny postage-stamp-sized windows: God doesn’t care what we accomplish. God just cares about how we treat other people. And, I suspect, the way we communicate all this to God is through play. I have been here many times before, this place of creative despair. I always get my answer. “Let your children teach you how to play,” my friend Jane said. So I came home to dinner. My son was standing on the small playtable by the window, DJing at our Bose as usual, air-guitaring to “Jack the Giant Killer.” So I grabbed a spoon and sang along.

I discovered yesterday that Patty, our longtime manager, doesn’t believe in indoor heating. I figure this has something to do with her obsession with women’s basketball and subsequent wardrobe of…