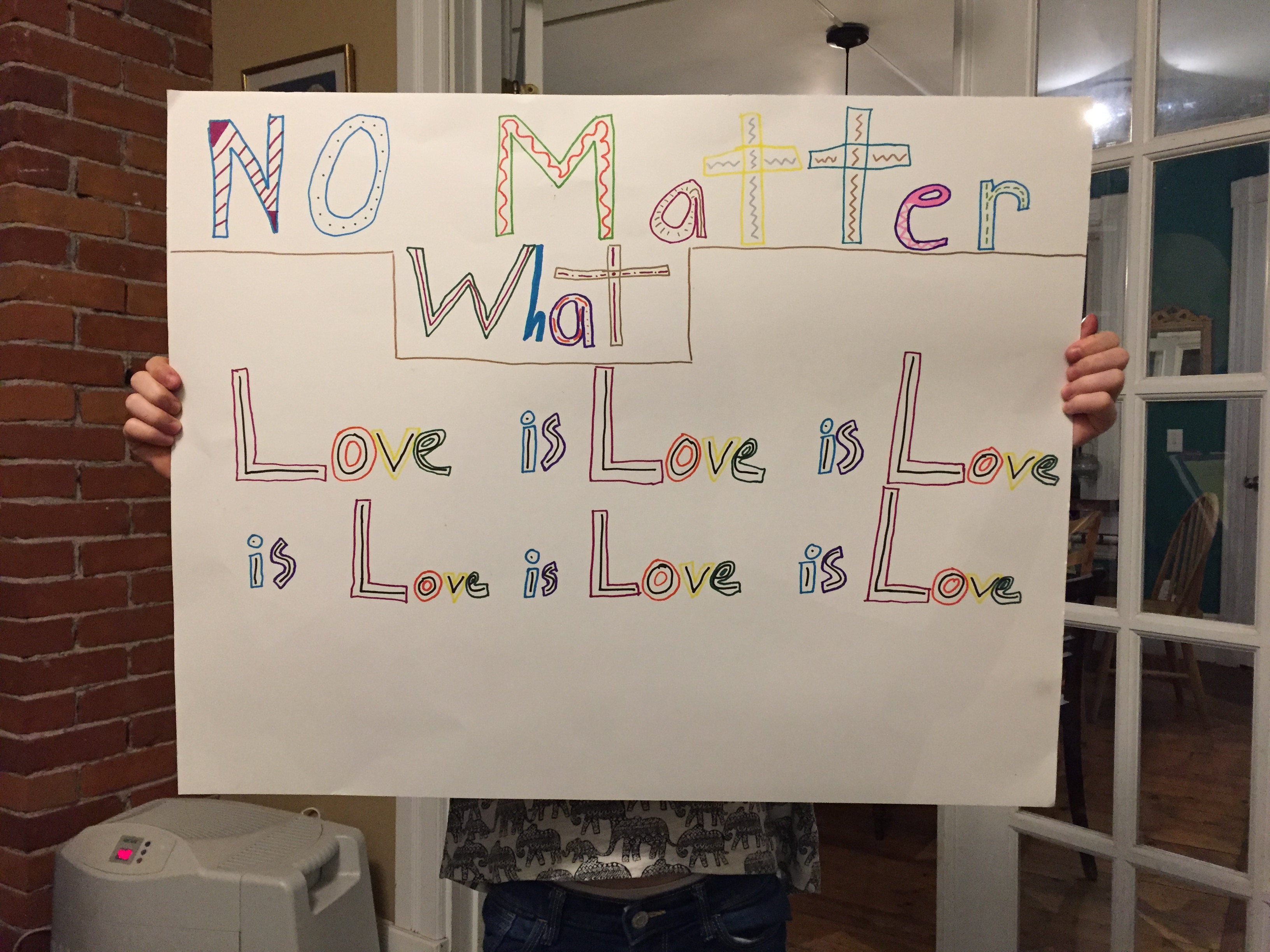 After Saturday, I felt happier than I have felt since, oh, about Columbus Day Weekend–– and I didn’t even march.  But I felt like I did. Tom and the kids went to Boston, and my parents marched in DC. Or rather, they stood. No one actually marched because it was too crowded. I was terrified that someone was going to get hurt, trampled, bombed, or (in the case of Tom) stung by a bee. (He is allergic. In my apocalyptic state, I’d forgotten bees aren’t around in January, even on 50 degree days.) But no one was hurt. Bored, maybe; frustrated at not being able to see or move, but completely unharmed. (The cynic in me wonders how peaceful the police would have been if the crowd hadn’t been so white and female.) Katryna and I did not march because we had a show that night in Connecticut, and I am learning that in order to do my job, I actually have to not do other things. (Most people with real jobs learn this by my age. I am a little slow.)

It paid off to rest before we sang. I wanted all my strength for the full house of Connecticut folks, many of whom had marched in Hartford earlier that day. The show felt part rally, part homecoming. We started our band in the Hartford area, and there were people in the audience who had been coming to our shows since the early 90s. We sang two brand new songs–one by Katryna and Dave called “Gonna Need a Boat” and one by me and Katryna called “Tyrants Always Fall.” We also sang our updated version of “America the Beautiful.” Afterwards, many folks thanked us for coming to sing and not cancelling so we could march. I guess we were in the right place after all.

But there will be a part of me that always regrets not marching on Jan 21, 2017 in the same way I know people from the generation just above me regret missing Woodstock. What a day it was. It fills my heart with delight to see the aerial photos full of the color pink. To witness my kids becoming activists. To see all strong, hopeful faces in different cities all over the world. To feel not so alone with the grief. The grief, of course, is collective–and on Saturday, we all got our marching orders. From my kitchen, I live-streamed Michael Moore’s speech, and then caught Ashley Judd’s. To our audience, I repeated the number MM told us to call daily, after brushing teeth and coffee and walking the dog–202-255-3121. Five days a week: Monday-Senator. Tuesday-other Senator. Wednesday-Congressperson. Thursday- State Senator. Friday-State Congressperson. Let’s take over all the swing districts. Did you know Elizabeth Warren’s seat is far from secure in 2018?

About the dog that I walk before I make calls. He’s great. Did we mention that Katryna adopted his sister? All is mostly well, but he doesn’t seem to understand that we don’t pee on the carpet. This got so bad that we rolled the carpet up and put it away. So far, no more accidents–but it’s only been about 5 hours. Any advice on housebreaking a puppy is most welcome. 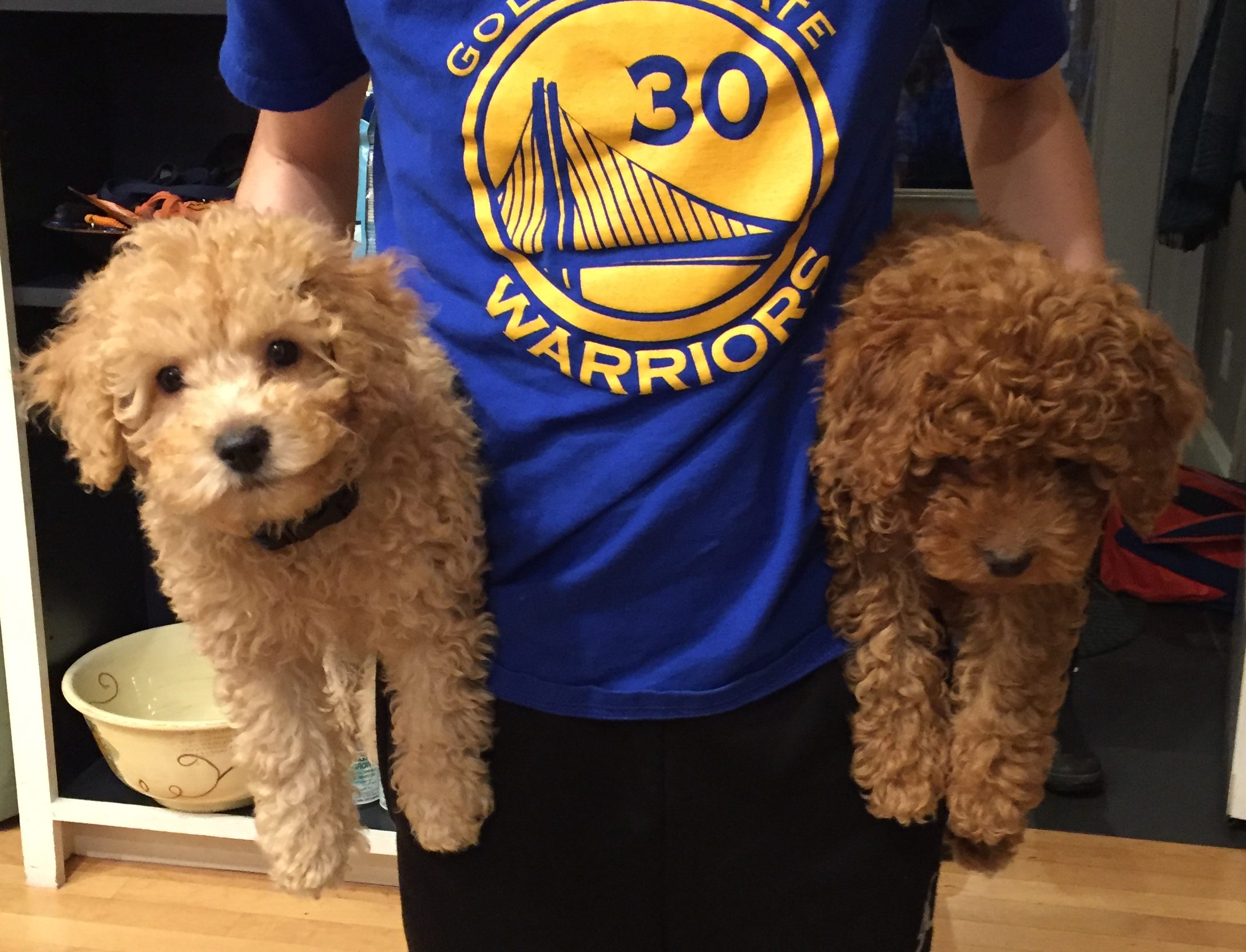 I have two acquaintances–women I went to high school with–who voted for Trump. I am not friends with them, but they are on my Facebook feed, and it occurred to me to check out how they were feeling about our new Emperor. One posted that in her “rainbow-flag covered neighborhood,” someone sent their “young child over to vandalize” her Trump banner. She was outraged. I can sympathize. Folks have vandalized my Hillary banner, and stolen my Black Lives Matter signs. Vandalism is never OK, in any event. What I found interesting, though, was the amount of push-back she got from her friends. One offered, “Trump’s own words and actions do not engender or support those beliefs. Again, vandalism is not OK. And neither is promoting the division, negativity and hatred for the ‘other’ which made that family believe it was ok to vandalize that flag.”

I explored the other acquaintance’s page. It turned out she’d actually gone to the inauguration, and in a post in which she was asking for advice about what to wear, I was amazed to see how many of her friends were horrified by her support of Orange Man. A few were in same-sex marriages and worried in the comments that their basic rights would be overturned. I just checked back on her page and saw a heated but civil discussion about abortion rights. It heartened me to see, in both cases, that these people I knew were being challenged; but also that they tolerated friends with different opinions. That is better than I can do. I am not proud of that. I hate confrontation, even on social media.

But. Now is the time for spirited discussion between friends who disagree. I am reading Michael Eric Dyson’s powerful book Tears We Cannot Stop: A Sermon for White America, and it’s challenging and difficult to digest. “Beloved,” he writes–-the entire book really does read like an intimate, tender, harsh, fire-and-brimstone sermon––“your white innocence is a burden to you, a burden to the nation, a burden to our progress. It is time to let it go, to let it die in the place of the black bodies it wills into nonbeing.” He painstakingly catalogues the psychology behind our institutional racism, our unconscious clinging to our white status and privilege, in a tone that is in turns patient and exasperated. I don’t know anyone who would call themselves a white supremacist, or even the more PC term “alt-rightist,” but I know scores of whites who don’t understand Black anger, have a completely skewed idea of “equality” and believe that the playing field is level today, even while admitting it hasn’t always been that way.

The playing field is not level, and it will never be level in our lifetime, no matter how many Black presidents we elect. White people have to face that the scourge and sin of slavery has long lasting repercussions, that racism is institutional and endemic, an illness that affects all of us, and that we have huge amends to make. Yes, all of us; even those whose ancestors never owned slaves. We have consciously or unconsciously embraced “whiteness,”–the notion that “white” is normal and good, and that anything other is an aberration at best–– and that this embrace causes great pain to our Black brothers and sisters. We have a long way to go to to make reparations. As Dyson writes, “I want to tell you right off the bat that whiteness is made up, and that white history disguised as American history is a fantasy, as much a fantasy as white superiority and white purity. Whiteness is most effective when it makes itself invisible; when it appears neutral, human, American.” And the calculus that far too many whites accept in trading innocent Black lives for some supposed security by allowing our cops to shoot first and ask questions later is what has caused the dislocation of justice, the complete distrust of the police by the Black community, and much pain and grief for all of us. Black Lives Matter is an attempt towards reparations. Bring it on.

My father was telling our friend Edward, an African American man in his 30s, about being stopped by the cops for speeding.

“Oh, man,” Edward said. “Did they do that thing where they hold a gun to your head after you roll the window down?”

No. That’s not how they treat white men in business suits driving Priuses. But that is how Edward is greeted by cops even when he is not speeding. He gets stopped routinely for Driving While Black.

I don’t have patience for my white sisters who don’t get this. I’d rather do a whole lot of things before engaging with two women I never liked very much on Facebook to try to skillfully and patiently present a different point of view. I would rather write a song, practice piano, knit a pink pussy hat, snuggle my dog, listen to my kids play violin. Let’s get real–I’d rather clean the toilet or declutter a junk drawer. But maybe this is ministry. I am going to pray about it. The fate of the nation might just rest on us not giving up on each other.