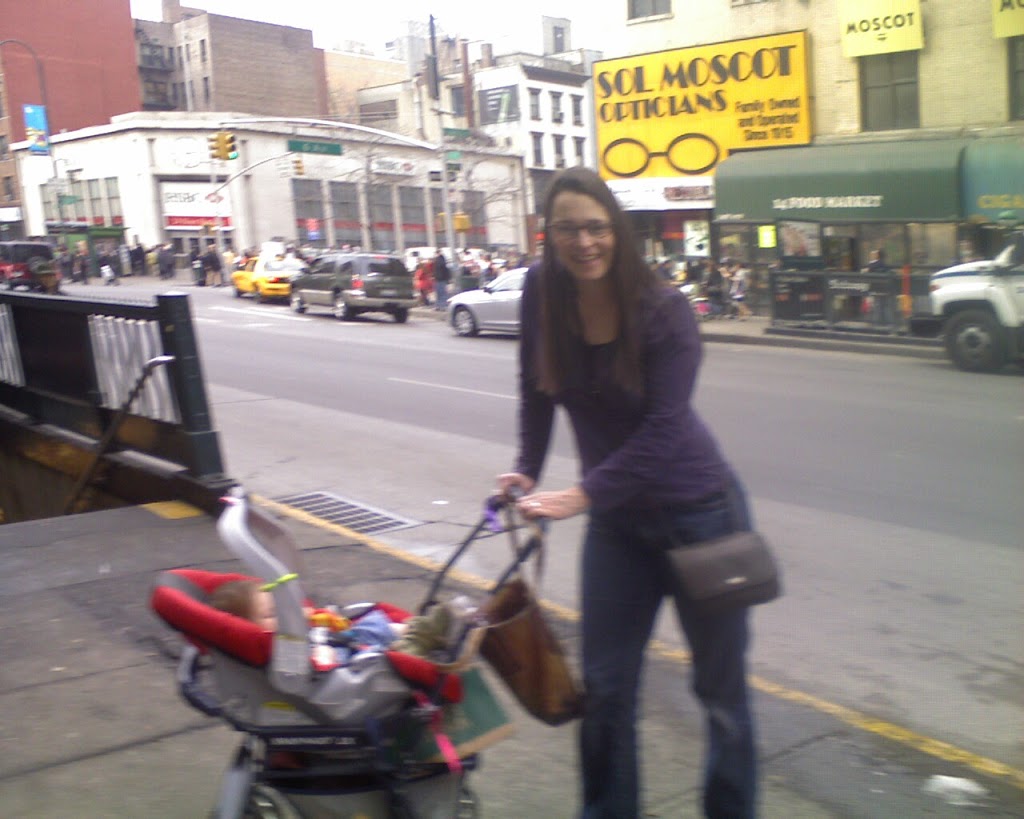 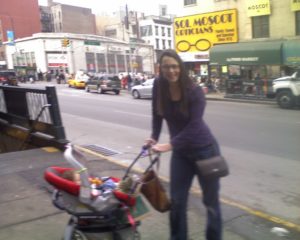 As I type this, Katryna and I are hurtling up the Hutchinson Parkway on Sunday morning at 9:19am, EDT. Johnny woke up at 5am by the old time after sleeping about 6 hours. I nursed him for awhile, and then let him rest on my chest while I tried to sneak a few more zzz’s. Then he threw up all over my hair, and I decided it was time to get up and go back to Massachusetts.

An hour and a half later, I was carrying our coffees back to the car on Bank Street. Katryna was boogying to “Muffin Man” in the driver’s seat. The sky was a patchy pale blue and the streets had that warm wet feel of early spring and I was not wearing a hat. I’d choose this mild, subtle weather over almost any other kind.

“So move to Seattle,” Katryna suggested helpfully when I shared this feeling. But part of what I like is the way it surprises me every single year. Really? Spring?

Yesterday was a perfect day. I say this despite the fact that we did not go up to see my 101–year-old grandmother. Johnny’s cold had moved to his chest and he was oozing bodily fluids from every orifice. I know how my grandmother’s caregivers feel about visits from sick people, so we decided to stay in the Village. We ventured out at lunch time and took pictures with my cell phone camera 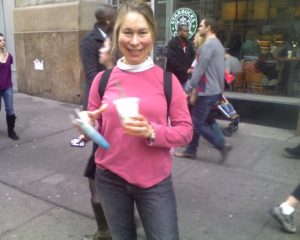 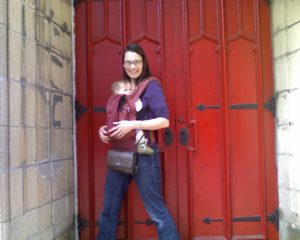 We had lunch at the Whole Foods at Union Station. Katryna insisted on carrying Johnny in the front pack and pretending he was her baby. People thought we were lesbian moms and were therefore incredibly nice to us, wanting to go out of their way to prove their open-mindedness, perhaps. “Welcome to the neighborhood!” sang other people with strollers as they passed us. “See you in the park!” Everyone was out, enjoying the first spring-like weather of the year. Lots of babies and puppies. I love babies and puppies.

Whole Foods was like a stadium show. There were perhaps three hundred people waiting in line to check out. Five Whole Foods staff were required to police the lines. People who were incredibly rude to other strangers came up to us and cooed, “Oh, what a cute baby!” Johnny waved at them. He is perfecting his Italian backward wave. Right now it’s at the stage where he extends his palm out and flat, facing up and waves his whole arm, Frankenstein-like. I would say he was cute too, if he weren’t my baby. Oh, yeah—I’m always saying he’s cute.

Last week, Katryna sent me this article from the Times by Natalie Angier. It’s all about how infant human babies are really fragile for a really long time compared to other animals. They have to be cared for much longer than, say, squirrels. So one of the ways we handle this is that we raise our children communally. Aunties, grandmothers, dads––all are what Angier calls “allomothers.” We let everyone hold our babies. But chimp babies who are almost equally fragile, are held exclusively by their moms, for good reasons: dads occasionally kill them just for sport. This is a handy evolutionary device: while chimps andother apes generally space their kids 6 years apart, we space ours, as every good Episcopalian knows, every 2.5 years. That’s why we rule the earth and chimps are closing in on the endangered species list.

The other evolutionary adaptation that comes from this is that our babies are incredibly social: they flirt, the beam, they even bellow charmingly most of the time.
My coaching mentor Martha Beck says we are the only animal that looks for a safe person. All other animals look for a safe place. We are the most social of creatures.

By the way, here’s an ad for Tylenol we passed: 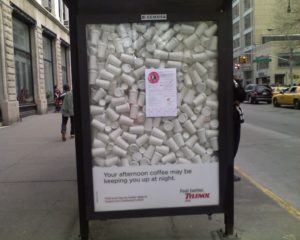 I was moving so fast, I just assumed it was some greenie goodie two shoes display of how terrible New Yorkers are about wasting coffee cups. Instead it’s a rousing endorsement of our amped-up drug-addicted culture. Have some legal downers with your legal uppers!

Katryna and I performed last night at the Watchung Arts Center in Watchung NJ. We both could have sworm that we’d only just done a show there, a year ago December, when I was just pregnant with Johnny (4 weeks—I’d found out the day before). Both Patty our manager and Lori our booking agent swore up and down that we hadn’t. We were relieved since that December show had taken place during an ice storm, and as a result (perhaps) the turn-out was tiny. So small that at the end of the night the promoter had said, “Do I really need to pay you your full guarantee?” (The answer, for all you potential promoters, is always “yes.”) So when we drove up last night and saw the familiar traffic circle and familiar little clapboard house, we both went, “AHHHHH!!! They hate us here!!!!!”

But then the evening turned into an episode of The Twilight Zone. The promoter was a completely different person who had no memory either of us ever playing there. Moreover, the set up inside was totally different. The show was fabulous, and packed, which was another difference. 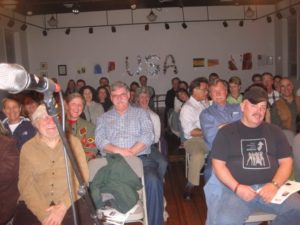 The crowd was mixed: some young women who resonated with “This Town Is Wrong” and such, but there were also more than a couple of –how do I put this respectfully?–cranky older men who might have voted for McCain and pursed their lips when we said certain things. (I see myself in these cranky old men. They liked things the old way, and now kids are coming along and wanting to change it all. I can relate, but I don’t really want to be that way. I want to be soft and pliable like my kids.) Turns out I was wrong about the men. Several of them came up to Katryna after the show and said, “Aren’t you the charmer!” 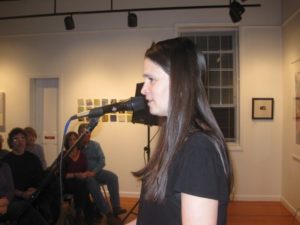 Katryna just had a great idea for The Big Idea. “You know how there was a first novel and people argue about what it was? Well, what if The Big Idea were the first in a genre? And what if the genre were this: the book is a (real) web site of a (pretend) band and each band member has a blog on the web site. And that’s how you tell the story.”

I think this is so brilliant I hardly know what to do. I have thousands and thousands of pages written, none of which I want to leave on the cutting room floor. The most recent version of this book was edited down to about 400 pp. But there are so many more stories to tell. This way, they all get out there. And we will raise money to publish some version of the story (I still have to chose which POVs to use) and a soundtrack. This way, librophiles can have an artifact in their hands and in their car CD players. We do need to raise money to pay Dave for his studio time, not to mention duplicating CDs.

I am home now. More about that tomorrow. Tom and Lila and Johnny and I walked into town and I bought Lila some fingerpaints and me some Pental markers and both of us some water colors. I feel so liberated and reconnected to my artist self. The irony of my taking a leave from coaching is that now I can see that I was cheating my life coaching clients by not walking the talk. How can I encourage people to take big chances when I myself am not doing my daily work and living through trust? But in the past week since I started blogging daily, I feel more inspired not only to make my own art, but also to share what I’ve learned with my clients. Art really does heal. I am reborn.

Wonderful interview of Katryna by our friend poet and mom Amy Dryansky on her great blog Pokey Mama. And….drumroll please.. announcing our new blog, Singing in the Kitchen!

“Oh I was always afraid. but I never let it stop me. Never.”-Georgia O’Keefe A few weeks ago, back when it was still warm in the mornings, I started out…

Gotta Get Over Greta Greta was our first big major label release. This is taken from the songbook we published in 1997. Greta began in the fall of 1994 when…