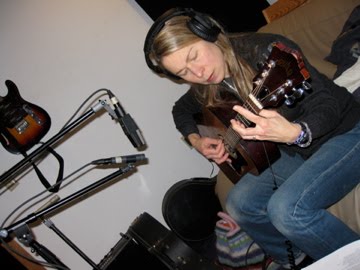 We’ve been here all day. Recording starts with Dave playing basic acoustic for “Can I Love You Too Much.” I was late; negotiating snowpants and snowboots for the kids, and my own lost checkbook without which I couldn’t pay the babysitter. Duncan Donuts has espresso shots, which is very unfortunate for those of us who want to eschew big corporations. But as Dave said, “At least now you are supporting an honestly compromised corporation instead of a hypocritical one.”

We record two versions of “Can I Love You”: the second slightly slower than the first. Katryna trying for a keeper voc. This is the easiest, most natural first go-round I’ve ever heard her do.

I am obsessed with Neutral Milk Hotel. Bought the entire CD (In the Aeroplane Over the Sea) last night on iTunes and listened to it on my run and commute. It’s scary and sad and amazing: based on a loose idea that Anne Frank gets reincarnated and united with the singer. Somehow there’s a two-headed boy involved as well. I still can’t figure out how we never crossed paths in the 90s. I’m haunted by the fact that they were in the same scene as we were; and Jeff Mangus is haunted by Anne Frank.

Jay woke up at 3:40am.I nursed him back to sleep in our bed, but after about 90 minutes he woke up playful. I am tired.

Dave is getting Katryna to do several excellent versions of her lead vocal. This reminds me of recording at Ardent Studios in Memphis with John Hampton in 1995 and his 4 vocal takes. I have to check with Katryna and Dave; did he merge the vocal? Or did we just pick one?

I keep thinking about the the article in the NYTimes about marriage. Elizabeth Weil invoked Nikos Kasantzakas’s “full catastrophe” phrase. She was brave to write that piece, but I kept thinking she should question her thoughts. This album’s all about marriage, family, these choices we make at some point that create a demarcation in our lives; a place after which there is no return.

Katryna and Dave finished their parts and we broke for lunch. Meredith Killough sent me a list of bands to check out. (“Neutral Milk Hotel is so, like 1999…”) which I did, or started to. I like Imogen Heap. Not so keen on Sufjian Stevens, though Dave is. I also don’t love Rilo Kiley, but I probably need more evidence. Like the rest of the zeitgeist, I am apparently shamelessly song driven. Someone said I must have a thing of nasal caterwauling. Well, I DO! But not just any nasal caterwauling.

I love Gillian Welch. Maybe she has something new.

Now back to “Can I Love You…” which is more Nashville, less indie rock. I did my lead voc on chorus and the bg vox. Now K is dong her bg on chorus. It feels so good to be finishing a track~
Sweet sweet harmonies. We’re singing with a lot of sincerity which fits. After all, this is a song to our kids.
On to “Hakatai.” Dave sets up the drums and gets sounds while I play “Ball & Biscuit” by the White Stripes on my iPhone speakers, Katryna says, “I find this chord progressions depressing and sad.”

Then I play her “16 Military Wives” and “Sons and Daughters.” She wants me to make her a mix and stop subjecting her to my crappy little iPhone speakers. Dave and Katryna and I do what’s supposed to be an experiment–all of us playing at once, live– but we like it so much we decide to keep the take and build on it. I punch out a spot where Dave wants to redo the drums. Katryna perfects a vocal. I want to hear how the bass will sound. (Also, I read David Pogues’ NYTimes peice on Dragon Diction. I download it and send Tom an email.)

Katryna writes: I love singing in that vocal booth. The trees outside are swaying int he crazy freezing wind and they evoke just the right feeling for “Hakatai.” Nerissa’s singing the low vocal right now. I love love love how her voice sounds down there. It’s like rich chocolate soup.

The hardest part is always lining our voices up exactly. It’s also the coolest part. When it finally happens, if feels like magnets finding each other.

Given that Italian has a consonant/vowel ratio Of nearly four to one, it’s clear whyMost singers prefer Verde to Schubert.Which would you rather sing, O mia babbino caroOr Mein Sohn, was birgst du…