This is a bad formula: rainy day, PMS, and a nostalgia mix from 1989. I upgraded to Spotify Premium (though I am not sure what I gain, since I don’t listen to Spotify that much. I did it mostly to support those musicians, like me, who want those Spotify royalties.) “Luka” is on, and whoa, does it bring me back. Magic, music is, and more evocative even than the sense of smell, which is what usually slams me back in time. Right now, I am back in 1987, home from college, late May, a rare Virginia rain. Hopes in my heart to have a career like Suzanne Vega’s, though I couldn’t even have articulated that then. Waiting to hear what my Words & Music College Seminar professor thought of my 50 page paper on the apocalyptic imagery in Dylan’s “Desolation Row.” Going to the mailbox every day with baited breath, the way we all approach our inboxes today. What on earth is it like to be a college student today, what with FaceBook and texting? Do people even miss their pals when they go home for the summer? Back in ’87, we had the telephone, and the newly invented…what were they called? Oh, yeah, answering machines.

Today, I don’t want to do anything. Gmail changed its inbox, and I just spent ten fruitless minutes trying to restore it to the old system. My new crown hurts, and I chickened out in the dentist’s chair when she asked me if she thought it needed to be adjusted yet again. I said I was fine. I wasn’t. What is it in me that makes me want everyone to think I am more OK than I really am? I have totally unsexy things to do on my list: edit a scene from The Big Idea, practice piano, and beyond that, tidy my office. I don’t want to do anything. So I should probably do just nothing. Or, perhaps, there is some big feeling I need to feel that I don’t want to. The gloomies have got me. I lie back on the couch and do some nothing for awhile.

Then I go back to focusing on my Spotify mix. I put on Tracy Chapman, and I remember John at Record Works, my supplier in Virginia who shared my love of the Beatles and insisted I buy Tracy’s debut album, produced by Joni Mitchell’s then-husband Larry Klein (who also produced Shawn Colvin’s Fat City, my favorite of her albums, but I am getting ahead of myself.) Shivers up my spine, thinking of how that CD changed my life, how I played it over and over on my elaborate multi-unit stereo which I lugged back and forth from Virginia to New Haven, up and down the Jersey TPKE, up and down four flights of stairs to my dorm room. I hear Bonnie Raitt’s “Something To Talk About,” and think about our first summer as a band, playing at Williamstown Theatre Festival, discovering the fabulousness of Bonnie Raitt and loving her guitar playing. I put on “Bohemian Rhapsody” and am in the audience of a Trinity Pipes show, watching my amazing sister sing with some of the best singers I’ve ever heard, with this incredible guitarist they all call “Guitar Dave” playing along. Neil Young’s “Ohio” was a song we covered in Tangled Up in Blue, and here I am, next to Leon Dewan, proudly flatpicking that riff, while my crazygreat tenor friend Joe Shieber sings the shit out of “Tin soldier’s and Nixon coming…”

There is no better track in the history of the world than the original “Knocking on Heaven’s Door.” TUIB also covered this, and when we sang it at my aunt Elizabeth’s house in upstate NY on our 1989 cross-country tour, five year old John Colonna, her son stood up after the applause and shouted, “But heaven doesn’t HAVE a door!”

“Cactus Tree” by Joni Mitchell felt to me, in the fall of ’88, as though Joni had crawled inside my head and had catalogued every boy I was dating. I had a Sony Walkman, and my job in the afternoon’s was in the Dean’s office, often delivering mail. I’d make my rounds in the New Haven rain, with this song playing in my ears. It took me years to figure out how Joni had tuned her guitar for that song.

When I first heard of Suzanne Vega, I was jealous. She had done what I wanted to do, and so my first reaction was to pretend she didn’t exist. Then I heard “Luka” and immediately wrote my own song (“Tripping the Light Fantastic”–better left unheard, folks.) Same with the Indigo Girls. I was so jealous that they had stolen my idea of being two women singers that I refused to like them for several years, even though I bought and listened to all their CDs. Now, I kiss the ground they trod upon.

I stuck on Sinead O’Connor’s “Mandinka” just because it was produced by our Greta producer Kevin Moloney, whose picture I will put here to freak out Katryna: 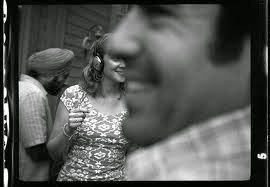 And then I stuck on a bunch of random 80s songs, some of which I hated at the time (Tears for Fears) but have now been around so long they have worn me down from sheer exposure and corporate nostalgia. In fact, I am so old now that I am not sure some of my memories are truly my memories; I might have borrowed some of them from the movies or have them confused with the memories of some of my contemporaries who drank too much at the time. Either way, I now like the song “Everybody Wants to Rule the World.” So shoot me.

This is a work in progress. I am hoping some of my classmates will help me remember what else needs to be on this mix. Oh! Like ALL of Graceland! And the Neville Brothers’ Yellow Moon. And the Folkways Woody Guthrie/Ledbelly tribute. And Sweet Honey and the Rock. And Vladimir Horowitz Plays Mozart. But this is just my slice of the late 80s.

After I make the mix, I call a friend and cry. I pick up Johnny for violin, and on the way, I see a woman who looks like my best friend from 20 years ago, in my Loomis Chaffee days. And there on the streets of Florence, it IS my best friend, Gwendolyn. I pull the car over and screech her name. I jump out of my car and she grabs me by the shoulders and we both jump up and down like little kids. We make plans to see each other when I get back from reunions; I jump back in my car and continue to violin. At dinner, we listen to the mix and let the music rock us back to the past and forward to the present. It works on me like water, gently washing me clean again, massaging my heart, preparing me for whatever is next.

To hear the mix, you’ll have to follow me on Spotify, apparently, though I have no earthly idea how to do that. But you probably do. The mix is called “1989.”

Now that summer really is coming, here’s how to play the guitar part for Wild Mountain Thyme.