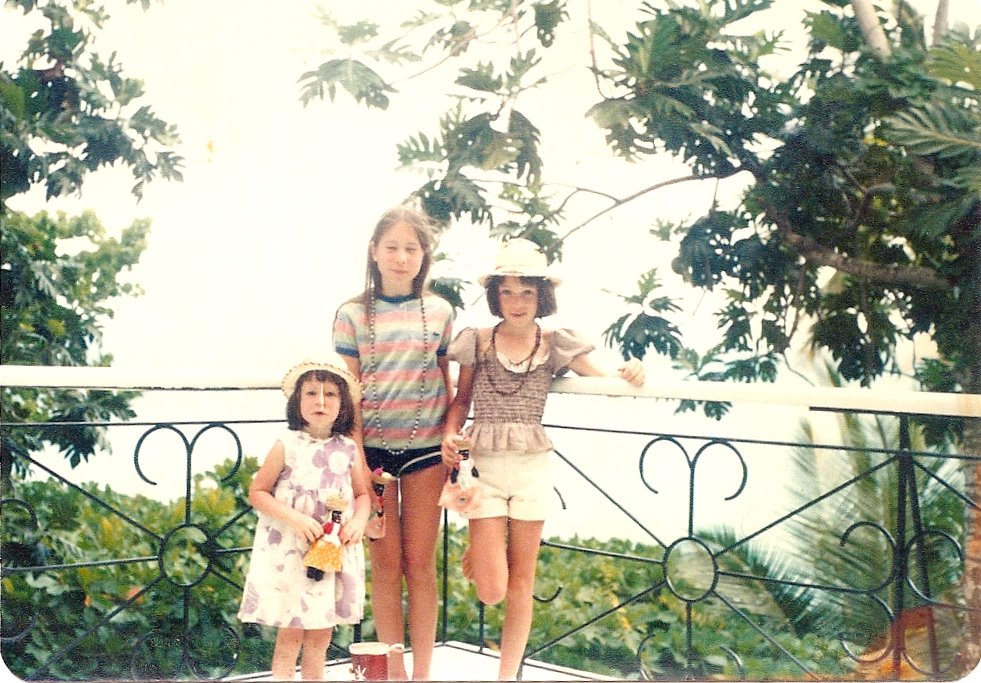 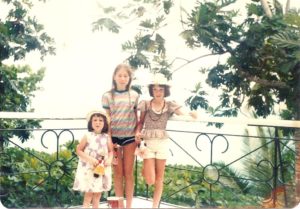 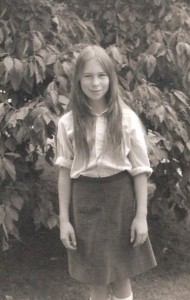 Yesterday, I came across two pictures of myself. In the first, I am eleven, standing between my two little sisters. Because I’m so focused lately on my posture, I noticed immediately how good it was back then. Yet in the second picture, taken only six months later, I am already slouching. Puberty? Sudden Knowledge of Good and Evil? The onset of The Largest Book Bag in the World?

I carried the Largest Book Bag in the World for the latter part of my school career, from seventh grade through college. For some reason, I was convinced that if I arrived at any place––class, library, someone else’s room where I might want to study––without each and every one of my textbooks, accompanying composition notebooks and three-ring binders, the world would promptly end. That or I would be bored, and I wasn’t sure which eventuality was worse. My father would occasionally pick up my backpack full of books (in order to move it off the kitchen table so we could eat dinner) and remark on it with tremendous originality: “What do you have in here? Rocks?”

Sometimes I also carried with me my Reader’s Encyclopedia, a two-volume set that had anecdotes about all the (western) authors who had ever written a sentence of literature. I think my left shoulder was permanently rendered lower than my right as a result of this habit. 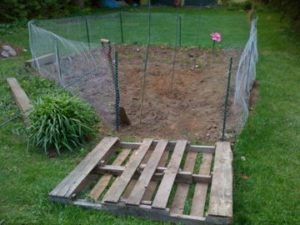 Yesterday, Tom and Elle spent all day in the garden. At some point, a Ziplock Tupperware appeared on our dining room table full of dirt.

“A house for worms,” replied Tom. “Elle is curious about them, so I thought I’d make a terrarium and we could watch them do their worm thing.”

Great, I thought. A box of dirt in my house with worms–– soon to be dead worms, most likely. A perfect addition to the clods of dirt being kicked into the house, the rat turds, Jay’s little puddles of spit-up, the somehow-melted-remains of the corn syrup painting Elle did in March which has dripped down the wall on which it had been displayed.

“She’s going to lose interest in it soon,” said Tom noticing my lack of enthusiasm for the worm box. “She’s three. She can’t stay focused on anything for more than a day or two.”

“Let’s just be sure that when she does, we liberate the worms. I have enough guilt on my head from ordering the extermination of the rats. I don’t want the worms’ death on my head in addition.”

So Tom took the box of worms outside and left it in the middle of the garden, as a sort of peaceful no-man’s-land kind of compromise.

I am having one of those days, by which I mean one of those days in which no amount of caffeine can perk me up. Jay woke me at 4am to nurse and I feel like my body has been trying to get back to the dream state I’d been in ever since. I have been hyper-aware of how poorly I use my arms and how every little thing I do seems to aggravate the pain between my shoulders, like writing with my right hand, reading anything; and in a moment of self-pity I had the thought, “Everything I love to do in the world I am going to have to re-learn!” and that made me cranky. I had to go across the river to do our weekly grocery shopping and return the friendly mouse inhibiting sonic devices that did not work at all to Target. (They referred to me their as a “guest.”) When I returned home and collected my children and paid the babysitter, Elle ran outside, and I followed her with Jay into our new garden, complete with chicken wire fence, In the middle of the garden was the Ziplock with the dirt in it and supposedly the worms. Elle shrieked and ran for it, scooping up the box as if it were a kitten, clutching it to her breast.

“These worms are very special to me, Mama,” she cooed, and she ran into the house with her prize in hand, promptly dropping it on the dining room table and moving on to the drums in the corner where she immediately performed a percussive version of “When The Saints Go Marching In.”

A old friend of mine is dying. He’s just been told he has only two months to live at the most. He’s in a hospice near his daughter, and he’s calling everyone he knows to say goodbye. He had been a big cheerleader for my band The Nields when we were first starting out, bringing us to the attention of anyone and everyone with whom he had any influence. I spoke with him today, asking him how he was feeling both physically and emotionally, and the answer was: pretty good. I wanted to ask him what it was like to know you are dying and that you only have two months. I wanted to tell him how much he had meant to me, and not just because he had helped our career. He is one of those people you just want to talk with because he is warm and spacious and funny and honest. I hadn’t had a conversation with him in over ten years, so a big part of what we talked about was me and what happened in my first marriage, how the band stopped touring. My story. I kept stopping to say, “Is this really what you want to hear about in your last two months of life?” And he kept assuring me it was. Sometimes people like to hear about other people’s troubles, so I tried to keep it entertaining. At the end, right before I could ask him something real, like “What do you think about right before you are falling asleep?” He said, “I can’t talk long now because I’m worn out but I’ll call you again. Or you can call me. I love you.”

One of the things this friend of mine and I happen to have in common is the college at which we matriculated. We both went to the same Ivy League School where people with lopsided shoulders from carrying The World’s Largest Book Bag abound. Somehow we both managed to find our way into the folk music community where intelligence and knowledge are rewarded almost as surely as they are in academia. But what is special about my friend is that he always valued the heart over the head. I may be wrong about this, but I think he liked my band not for my inscrutable (at the time) lyrics but for the way our voices sounded, especially Katryna’s. In fact, he said today, not attempting to spare my feelings, “Your sound, man. I just love your sound. Some people find it grating, but not me. I just think it’s…wow.”

I really hope I get to talk with him again before his two months are up. I want to tell him again that I love him and I want to try to make him laugh. I want to tell him about Elle and Jay, about how Elle is collecting worms. He will probably make some sick joke about how he will be their next meal or something similar. For my part, I want to learn from him how to be in the moment, to drink in each minute as if it were my last, because then I could finally shed this pack on my back, this heavy bag of boredom-relieving insurance that I’ve been carrying around since I was twelve. I want to be like Elle, clutching my beloved to my chest for the moment, and then dropping it the next so I can sing my song.

My cheeks sag down Making me look even sadder than I feel There are new folds in my eyelids Pillows under my eyes Donald Trump wants to fix this. He…