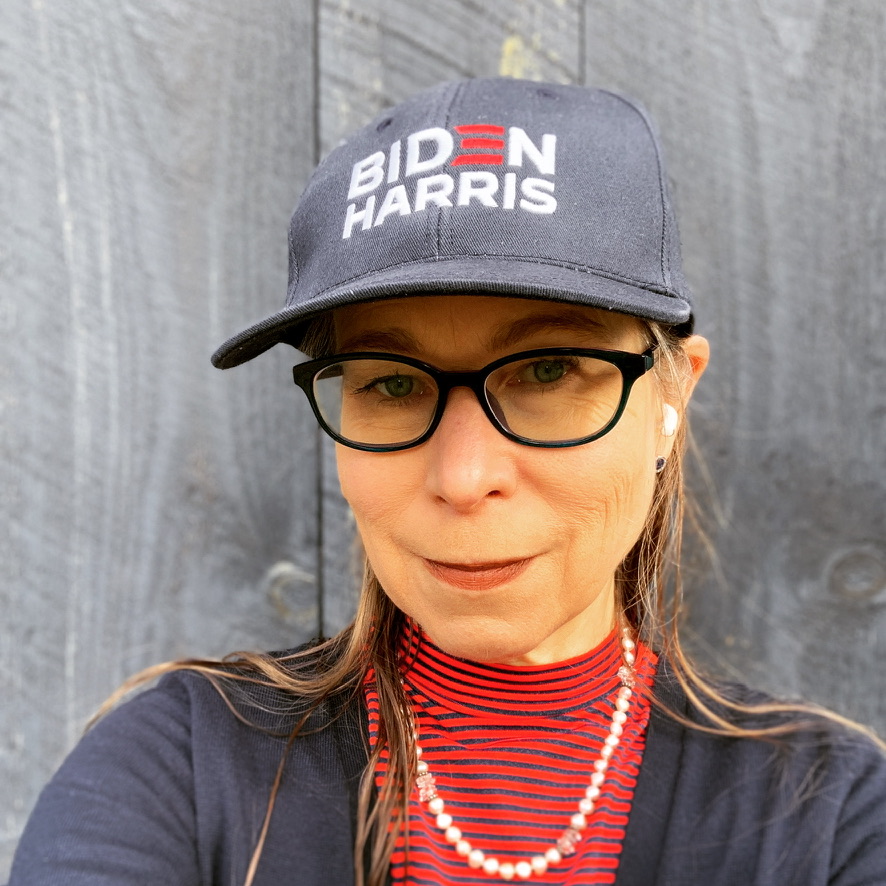 I woke this morning with plans. I would read a chapter two of Six Walks in the Fictional Woods, work on chapter three of my new novel, re-read The Big Idea in preparation for my talk with my faculty advisor at the end of the month. My house is a disaster, still in chaos from Christmas.

But I threw all plans aside, moved into South Couchland (family room) and parked myself in front of MSNBC to watch the events of the day. First we watched CRAP (Current American Republican President––who will very soon be known as WEPE, Worst Ex President Ever)––fly away Nixon-style, though not before saying the words “I wish the new administration luck.” No, he didn’t mention Biden’s name, but given that he was off-the-cuff, it was better by a long shot than anything I expected.

As I watched Air Force One disappear into the wild blue yonder, I wondered: now that he was no longer occupying the White House, would he soon stop occupying my mind, keeping me hostage to an anger bigger than any I have ever experienced? To stop hating him and his followers would be the greatest liberation I could experience.

I cancelled both of my writing groups today, and Tom cancelled his obligations, too. The kids have a short day anyway on Wednesdays, and as I settled in to watch the festivities, I knew: this is exactly what I should be doing. I should be savoring. I should be celebrating. So, I am. Yes, I still have some fear that there will be violence again, but as the day ages, I breathe a little easier. I am feeling emotions I didn’t know I was suppressing: a deeper grief in understanding more fully all that we have lost; all whom we have lost. And a deeper joy than I ever imagined I would experience on this day.

Yes, I hoped for this day; I’ve hoped for it since November 9, 2016. In my fantasies at the time, the new president was nameless, faceless, genderless. I only knew that pretty much anyone would be better than the person a minority of Americans had elected, a person who clearly abhorred not only government and governance, but someone who would actively work to undermine our democracy and our systems of justice.

Though I did not vote for (now) President Biden (!!!!!) in the primary, I was ultimately glad he was our candidate. His team ran a flawless campaign, and with 2020 hindsight (pardon the pun) it’s pretty clear that had we run a candidate any farther to the left, we would likely have lost those critical swing states. Biden is also nothing if not big-hearted, hopeful, forgiving and experienced. He did brilliantly to choose Kamala Harris as his VP. I am giddy watching them all––Dr. Jill and Second Gentleman Doug too––reverentially rise to their new positions of responsibility. I am tearful watching the former presidents and their partners, even––maybe even especially––George and Laura Bush––witness and congratulate the 46th president of the USA.

We interrupted our MSNBC watching to jump on the porch steps and video “Tyrants Always Fall” as part of our friend Dar Williams’ initiative #Steps2021. When I wrote “Tyrants,” it was an act of self-preservation. I was so deeply shaken by Hillary Clinton’s loss and fears that we would soon be overwhelmed by fascist racist xenophobic misogynist hate that I clung to Mahatma Gandhi’s words like a life raft: “ All throughout history we have seen tyrants. And tyrants always fall. Think of it: always.” I also clung to the fact that Clinton had won the popular vote by 3 million; that if I were to walk down the street, there would be more who were horrified than there would be of those who were pleased.

Four years later, it’s fair to say that many of my fears came true: Trump replaced decent and exceptional Supreme Court justices with right wing extremists. He packed the lower courts with far-right judges—though not completely unhinged ones, as not a one supported his efforts to overturn the election of 2020. He separated families at the border. He destroyed years of environmental regulations and set back efforts to curb climate change in ways that may spell our doom. He applauded white supremacists and violent hate groups. He created and encouraged a climate of division. Worst of all, because of his extreme narcissism, his disparagement of the news media rose to such levels that his followers ceased to believe anything or anyone who didn’t possess Trump’s stamp of approval. We now live in a nation where a significant minority don’t believe that mask-wearing can contain the deadly coronavirus or that Joe Biden won the election by over 7 million votes, and the electoral college 306 to 232.

Our WEPE actually supported QAnon, a conspiracy group that…oh, but you who are reading this post, you know all this.. Of course you do, and I am going to stop with this now, before I bring up the insurrection of Jan 6. That post can wait for another day. I am letting, for the moment, that helicopter go, and I will not bother to imagine what’s going on in Palm Beach, because as my friends say, I don’t need to allow that jerk to live rent-free in my skull. Instead, I am going to focus on these alien feelings of joy, relief and––yes––hope. I’ve not allowed myself to feel these since 2016. Tomorrow, I am going to roll up my sleeves, because this time around, I’m not going to be a rainy-day activist. I’m starting tomorrow to think about the midterms and even 2024. We all need to join together to envision the America we want. With due respect, I differ with our new President and with others who have said, after Jan 6, “This is not America.”

Unfortunately, Mr. President, it is. It always has been America; we’ve always been divided about who exactly gets to govern and choose the government. The principles set down in our Declaration of Independence and Constitution––the self-evident inalienable rights and the Blessings of Liberty––are worth fighting for, like anything worth fighting for–-a marriage, one’s health, one’s paycheck, one’s creative spark. So we’ll fight. But tonight? We’ll savor. We’ll celebrate you, Mr. President, and your big, strong, loving, hopeful heart.

And your choice for inaugural poet, 22-year-old Los Angeles Youth Poet Laureate Amanda Gorman? Thank you, and thank you, Dr. Jill Biden, for bringing her to our attention. If she’s serious about her political aspirations, I’ll be voting for her in 2036. In her words:

I didn’t used to be an emotional person. I’d notice people–sometimes my friends–crying at movies or during a sad song, and I’d wonder why. Of course, when I was a…