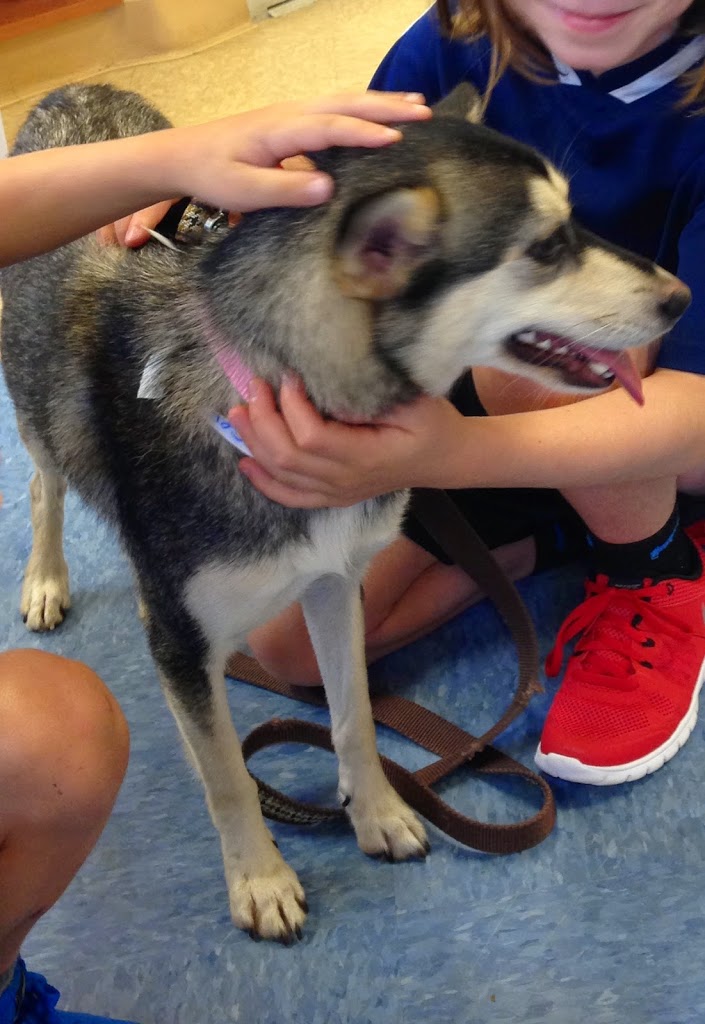 At Falcon Ridge, my kids busked with their little violins, and filled their fiddle cases with dollars and quarters. At one point, their cousin shouted “Donations!” to the passers-by. Horrified, Tom gathered the kids and told them they had to pick a charity to give the money to, and that charity could not (only) be their Nutella Crepe fund. So they chose the Dakin Animal Shelter.

Elle has been militating for a dog for about three years. She wears dog socks. She reads only books about dogs. She stops to pat any dog she sees. She cries herself to sleep at night because the day of the dog has not yet arrived in our house. She has pledged what every dog-loving child pledges: when we get the dog, she will walk it and feed it and bathe it and save all her pennies for the vet bills. Her last birthday was a dog-themed party. Her friends all gave her birthday cards with pictures of dogs on them. When she grabs my iPhone, it’s not to play video games, but to look up her favorite breeds’ puppy pictures.

Last Thursday, the last possible day for me to do anything, I took the brown paper bag and the kids to Dakin in Leverett. I prayed hard. Let them all be ugly. And barky. And smelly. I prayed to be stopped from getting a dog; unless, of course, we were supposed to get a dog.

We gave them our brown paper bag, and they let us see the dogs. The first dog we saw was a tiny dainty Husky-like critter, like what would happen if you mixed a basenji with a chihuahua and painted it with husky colors. Three years old, a dixie dog from Texas, total beta dog, non-barking or jumping, sweet and cuddly. Eighteen pounds. Delicate and graceful as a greyhound. And I was done.

Or at least, I spilled the beans, showed my hand, or whatever you want to say. I let the kids know I was smitten, and they dug in with all twenty nails. We walked her, we played with her, she never barked (except at the guinea pigs), and we put a deposit down on her and went home to tell Tom he needed to stop us.

But Tom came back with us and said, “We could never handle a puppy. This dog even Jay can handle. It’s inevitable. Let’s do it.”

I proceeded to not sleep that night. What if this wasn’t MY dog? What about all the other dogs I want to get? The ruby King Charles Cavalier puppy my aunt’s dog might whelp next spring? The Aussie pup I’ve always dreamed of? The big soft Bernese Mountain dog I want to snuggle up next to on a cold winter night? When your dream comes true, you’re out one dream. Now I don’t get to fantasize about my dog. I will have my dog. Plus, what if Jay is allergic to her? What if she eats the guinea pigs? What if she isn’t housebroken? What if she continues to smell (because she did smell. This is because she has not been bathed in anyone’s memory.) And if I had doubts, did that mean I should not go forward? Was this like choosing a husband? Would the doubts form a cold wet coating in the pit of my stomach, and remain there for years? Plus there was the cost.

Also, I got hung up on this other dog that Dakin had. A fluffy-haired one-year-old with giant brown eyes and soft shepherd fur. A dog with a retriever muzzle, a dog who looked like all the dogs I’ve ever had. But my kids were not interested in this dog. They wanted Stella, the miniature husky.

So we put Stella in the van. As we drove, she came up between the two front seats and put her paws on the console and panted in that nervous ways dogs pant when they are in the car. And I don’t know why, but suddenly she was my dog. My doubts went away. We went to Dave’s and bought hundreds of dollars worth of dog stuff, including a great shampoo. We brought her home and romped around with her. We let her sniff around our park, and I explained to the kids that dogs sniffing in the park is as pleasurable to them as Facebook is to us. It’s how they get the local news. We gave her a bath, which she tolerated. After, I put my arms around my sweet smelling pooch and proceeded to sneeze. She crawled into my lap.

Elle slept in the kitchen on the floor next to Stella’s crate. When we went to bed, we looked down at our daughter’s face, totally peaceful, one hand curled under the gate of the crate, the dog’s sharp little nose pointed at her fingers.

This may not be MY dog. But this is my kids’ dog. And I will do anything to support them getting to have this dog.

Fingers crossed that we are not allergic. 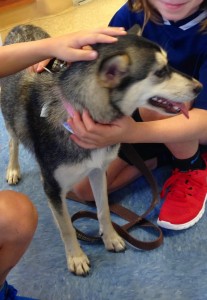