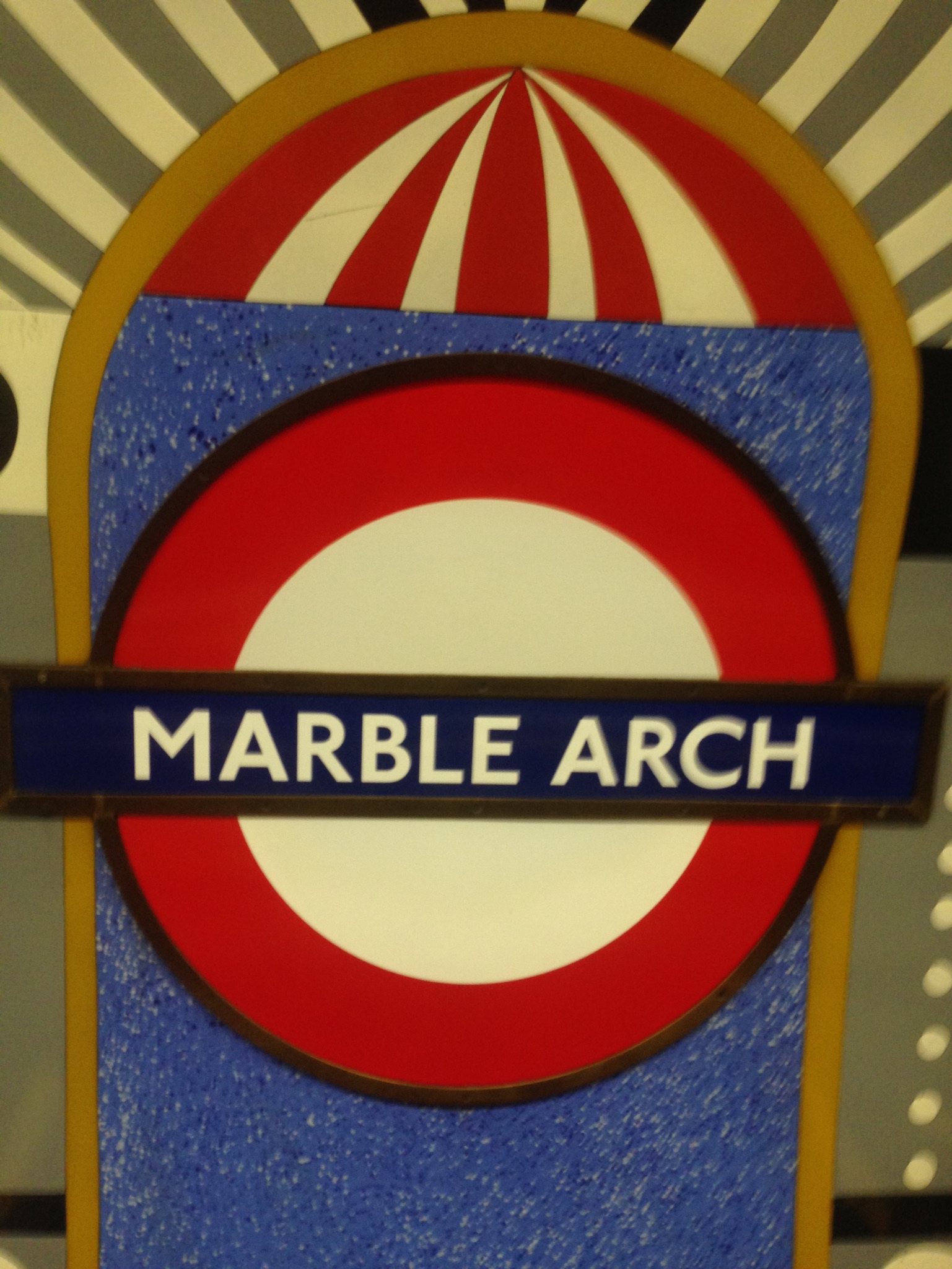 Yes! Things are looking up. It helps immensely to have our friends from Northampton with us. They are cheery, intrepid travelers, eager and enthusiastic. These are qualities lacking in some of us these days, speaking mostly for myself. The drug I’m on for shingles makes me dizzy in the am and very lethargic. Caffeine helps! And there are Starbucks on every corner, natch. The shingles seems better today. There are still new pox forming, but the old ones are getting purple and scabbing over. Luvly.

Lots of people recommended I read White Teeth, the Zadie Smith break-through novel from 2000. It’s a fantastic way to experience London, a hilarious cultural romp so far. I am reading and also listening on Audible. The narrator (Jenny Sterlin) is incredible, doing all the accents very well. In the mornings, I go for a run up a steep steep hill to a park, wind around and enjoy the view of the Shard. There should be a picture of that here, but there is not, alas. Instead, a pic of the park itself, where my family goes to play football. See how I said “football” instead of the “s” word? 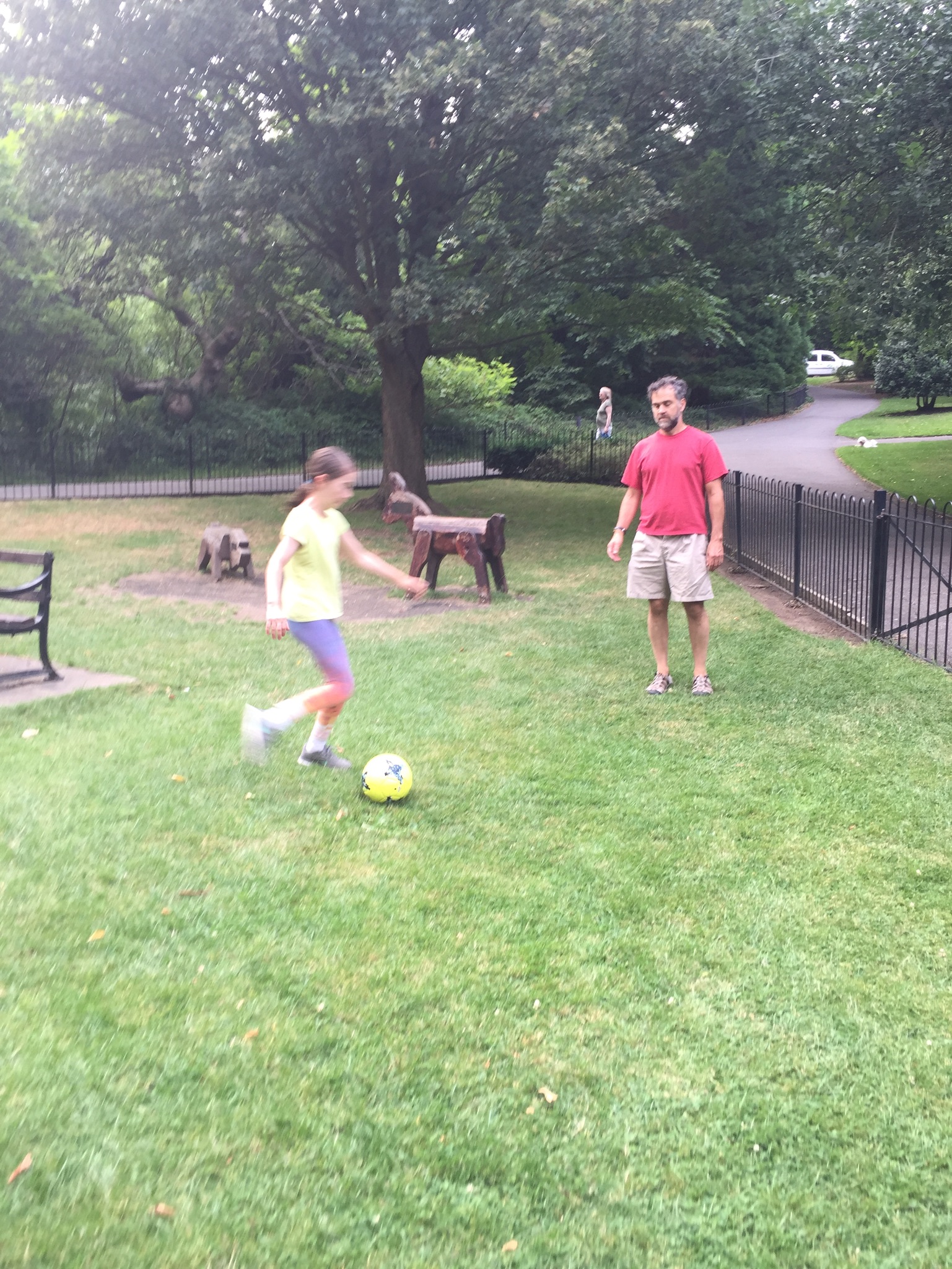 We tromped along Oxford Street and felt like we were in New York, somewhere near Times Square, perhaps. The kids loved it. Grown-ups yearned for Swinging London’s Carnaby Street and instead got served up corporate America, which is Corporate Everywhere now, I guess. One thing I keep thinking is that the English took over the world in the name of commerce, and to some extent succeeded. The British Empire was about creating wealth for the wealthy and comfort for the British. I don’t know quite what other values were valued. Decency? “Christianity?” But what did they mean by that? 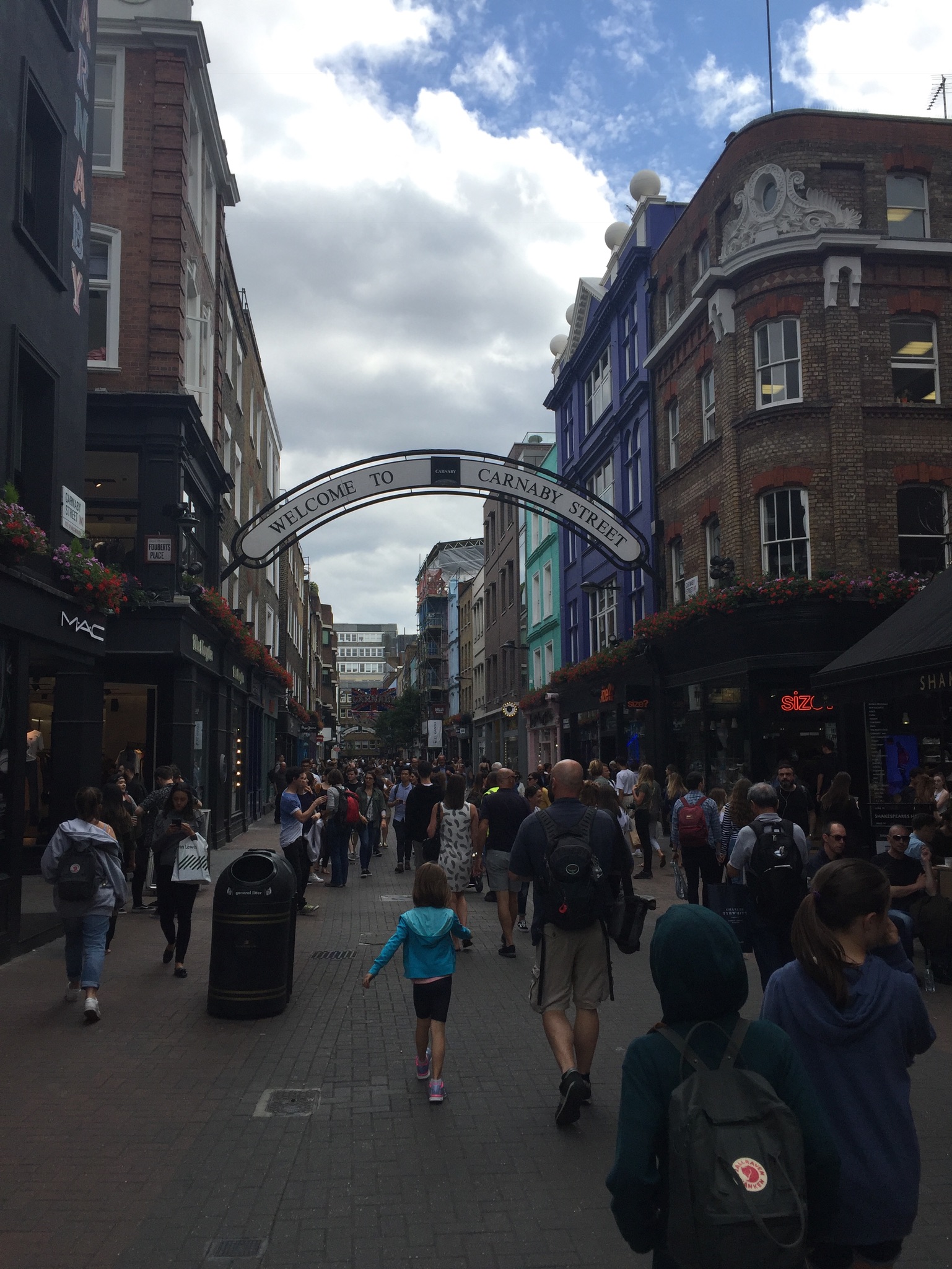 Our intention was to go to the British Museum at some point, but instead we ended up hanging out outside of it, looking dolefully at the huge crowds and retiring instead to a luscious bookstore called The London Review and having tea. (Mostly what we do here is stop for sugar and caffeine). My kids invented a younger sister for the trip. Her name is Rose (I get to call her Rosie, cuz I’m her mama). She had brown wavy hair, green eyes and is left handed. She is six, and her favorite book is War and Peace. We made sure to keep our “eye” on her as we made our way through the crowds. I was reminded, by Rosie, to buy a copy of the translation of War and Peace that came out in 2008, by Richard Pevear and Larissa Volokhonksky. I had read this behemoth in 2005, and I am ashamed to say I now barely remember it. So I am going to try to read a page a day. To Rosie.

I booked train tickets to Liverpool for Monday. Yes, of course I did. You didn’t really think I wouldn’t, did you? After all those years of torturing my parents? The joke is going to be that the kids will hate it! The Magical History Tour was all booked up, but no matter–it would have been too much to spend all day on the train and then get on a bus. We’re going to the Beatles Museum. I love how you don’t even need a printer in this day and age. Just show them your iPhone! Tomorrow we’re going to Abbey Road to get our photo taken on the crosswalk.

Authority, or What The Democrats Have to Do with the Structural Problems of Novel-Writing

I am working on what is perhaps my fortieth draft of The Big idea. Maybe the fifty-fifth. I have lost count. Recently, I received feedback from two excellent writers who…

Quickie for Thanksgiving and a cartoon

In what might be my favorite parental comeuppance ever: Elle (whose real name is Lila) picked out a get well card for her grandmother who had surgery on Monday. Yesterday,…