This Dog Needs Her Family 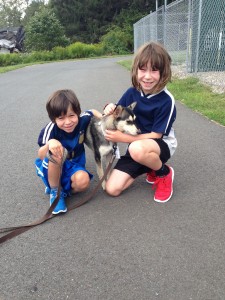 And unfortunately, that family can’t be us. Stella, our 20 lb 4 year old Dixie dog has been living with us a year now, and while she is 99.9% fantastic, she very occasionally places her open mouth over your eye, just to let you know she doesn’t like your sense of personal space. Unfortunately, she tends to do this behavior with young children who don’t know the first rule of Canine: don’t look a (stray) dog in the eye.

She never actually bites. She just kind of whacks you with her open mouth. But it’s extremely unsettling, to say the least, and when I finally got around to asking my local dog whisperer to come over and get us some training around this, she said, “I’m afraid it’s not possible to train that behavior out of her. The only way would be to risk a child’s safety.”

We’re not willing to do that. But, as I discovered, the shelter from which we got Stella, Dakin in Leverett MA, will only take Stella back to euthanize her. And we are equally unwilling to do that. So it seems the only choice is to keep asking the universe to help us find Stella a forever family–one with, preferably, another dog and no kids under the age of 10.

Stella, a tiny husky mixed with something like Jack Russell or chihuahua, or maybe Shibu Enu, is sweet, cuddly, energetic, usually quiet, well-behaved, comes when she’s called, sits on command, lies down if there’s a treat involved, mellow, and very playful. My seven year old son (the most frequent victim of Stella’s 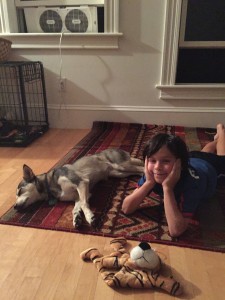 mouthing) doesn’t hold it against her at all, and continues to play with her as if he were a puppy too, playing tug-of-war with her toys, dancing with her by holding her two front feet, and generally rolling around on the rug with her. Tom takes her for his long runs. I pretend she’s a lap dog. Our nine-year-old vet-to-be loves her more than almost anything in the world, and spends each morning snuggling her on the couch. This is not a dog who should be euthanized. She just needs to be in a house where young children aren’t always sticking their fingers into her crate. If you know someone who is looking for a great dog, please have them contact me through the form below. Thank you, friends.

My seven year old has lost exactly half of his four front teeth–just the ones, curiously, on the right side of his face. He is the kind of kid who hangs on to teeth, while his sister…