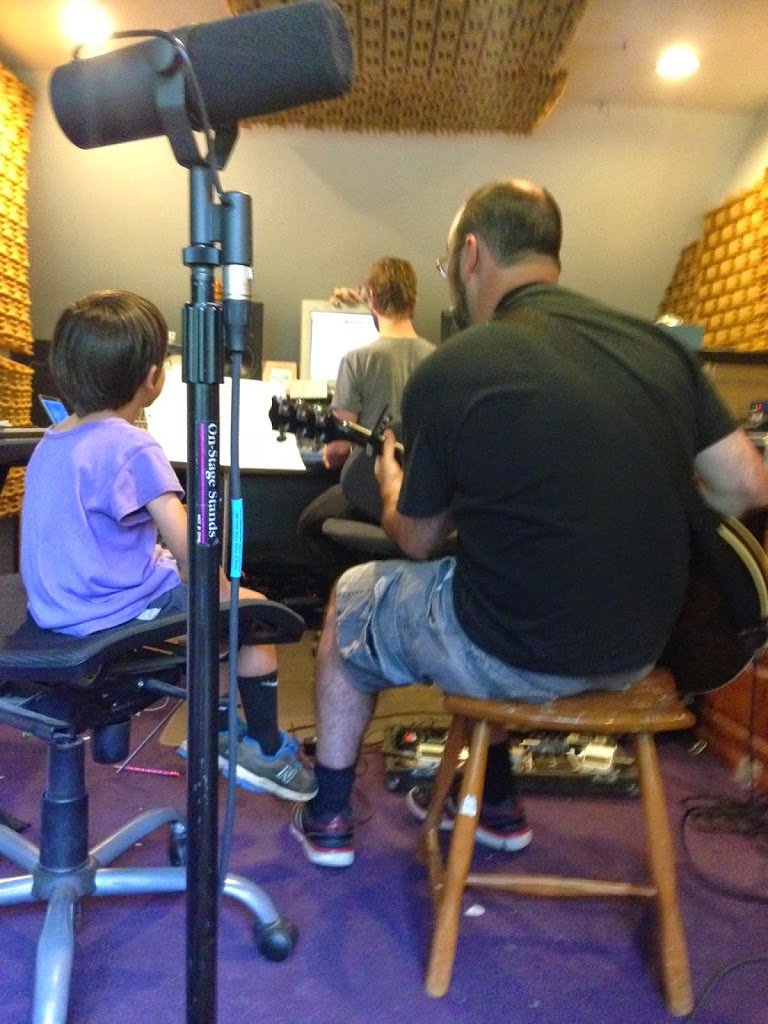 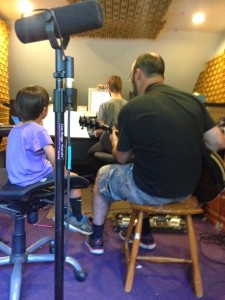 It’s the last day in the studio, at least until September. Truthfully, we are almost done. I have to do vocals on the choruses of “Dave Hayes,” the chorus of “Witness,” the choruses of “You Don’t Have that Kind of Time” and backgrounds on “Normandies,” plus a few other tiny things. Katryna is completely done. Kit is going to take the project back home with him to Virginia where he and his studio partner Chip Johnson will add some more gorgeousness. Then Kit will return in September and we’ll see what else we all want and need—for surely much will come to the surface as we listen through to all the tracks over the next two weeks.

The album is beyond—far beyond—what I thought it could be. I had liked the songs, coming in, but what they’ve grown into is …well, words fail. I probably say this every time (though I didn’t say it about Full Catastrophe), but this is my favorite record ever.

Making it has been interesting. In the past 10 years, we’ve mostly taken our time with our CD-making. We had that luxury, since Dave Chalfant was our producer, and it was his studio, and we had no label clamoring for a next release. But after Catastrophe (that sounds so ominous!), we learned our lesson. We need a deadline! Plus, we need to make a living, and suspending our lives while we focused on one CD seemed wiser than prolonging it all indefinitely. In short, we could only afford to take a month off. And we have families who want vacations: these dictated the beginning (when Katryna and her family got back from theirs) as well as the end (when my family wants to go on ours) of the recording window.

Here are the tracks on the new CD, plus some bonus material for a little Kickstarter premium:
Princess
Wasn’t That a Time
Love Love Love
Normandies
As Big as I Am
I Put My Treasure in the Rock
Victory (Turn it Around)
Delilah
Witness
You Don’t Have that Kind of Time
Dave Hayes the Weather Guy
Joe Hill
River
Bonus tracks:
I’m Pretty Sure That My iPhone Is Making Me Sick
Acoustic Joe Hill
Lonesome Valley
Last Night I Had the Strangest Dream

Earlier this week, the world learned that Robin Williams had hanged himself. For some reason, this hit me very hard. Perhaps because he was in recovery. Perhaps because he came on the scene when I was a certain age (eleven), and was old enough to be struck by his unusual talent and brilliance, and the right age for his first hit, “Mork and Mindy.”
What must it have been like for him to be catapulted to superstardom at the age of 27? Intoxicating, surely. And for a bi-polar self-proclaimed alcoholic, this high must have always felt wobbly. Or maybe not. I have no idea what happened, why he would kill himself, but I do know that the worst pain I ever suffered was when I harmed myself and others, doing things without my permission. Rumors get piped in through every channel: Parkinson’s, relapse, mental illness. We will all take this story and project our own experience onto it. I think that’s part of the reason so many are fascinated by celebrity dramas. For me, it brings up a theme I’ve been struggling with of late.

What happens when you get to a point in your life when you see the big view? I am not arrogant enough to think I see the whole view—but I am at midlife. The top of the “Hill,” over which I will (arguably) soon be. We get to this place where we see how far we’ve come—look! Our kids are getting more independent! Look! The paint on the house is peeling. Look! Our marriage is settling into deeply rutted routines. Look! The audiences are dwindling. Pretty soon….fill in the blank. The kids won’t need us. The house will need a paint job we can’t afford. We’ll be taking each other for granted. The performing career will be over. It’s the snag; the hook of nothing lasts forever.

This summer is the summer of Whoa. Not yet.

Playing at Falcon Ridge on the main stage with a full band was a sharp reminder that there is still plenty of juice in the old girl, or girls as the case may be. We still rock. This new CD is proof of that. I thought the worst thing that could ever happen would be that Dave Chalfant would stop producing us. I thought no one could get our ideas into digital grooves the way he could. I thought his departure from the engineering throne would be our demise. It turns out what we really needed was fresh ears, new hands, an objective view of our 23 year career.

This morning my almost 6 year old climbed into bed with us. He still does this, fairly regularly, and when I am not living in my head, I notice that I actually still have two cuddly little kids; they are not yet teenagers, and they still need me, play with my hair, snuggle in my lap. I am still alive.

Nerissa & Katryna and the Falling Down Barn in 2007 I have sudden and severe laryngitis. I can no longer yell at my kids. In fact, I feel myself to…