The Shoulds and the Tao Verse 17 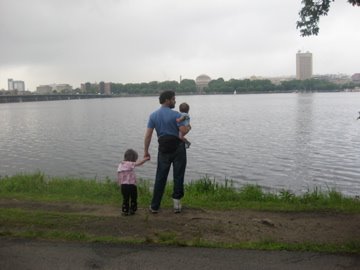 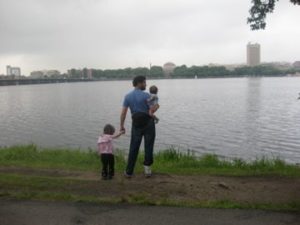 When the Master governs, the people
are hardly aware that he exists.
Next best is a leader who is loved.
Next, one who is feared.
The worst is one who is despised.

If you don’t trust the people,
you make them untrustworthy.

The Master doesn’t talk, he acts.
When his work is done,
the people say, “Amazing:
we did it, all by ourselves!”

The first few lines of Martin’s verse generally describe the way I parent, or the way I have been, anyway. Big cereal bars are the most likely candidate for reward, with watching an episode from our Curious George Goes Green DVD a close second. Withholding one of those two carrots is our most usual form of punishment, though we do use the occasional time-out (trying to be extremely neutral about times-outs because we don’t want Elle to connect quiet time with punishment. When we give a time-out, we try to emphasize our own need for space when we get disregulated. Who knows if she understands what we’re talking about, but it makes Tom and me feel better.)

But as I wrote in a previous post, I am trying to get away from my habitual pose as Cheerleader Mom. I keep asking Elle, “Oh, how does that feel when…” When you put your toys away, when you make your brother laugh, when you have a tantrum. The answer is invariably (and interestingly) “Good.”

Today at lunch she was filling me in on her morning with her babysitter.

“I played with her really well, Mama. I didn’t even have a tantrum.”

“Wow,” I said, nodding. “What does it feel like to have a tantrum?”

“Good,” she said, munching on her sugar snap peas.

“Does it feel…like a lot of movement, or does it feel still?” I persisted, genuinely curious.

She chewed some more. “Um,” she thought about it. “It feels move-y and still. Both.”

“I know what you mean,” I said. “That’s how it feels to me sometimes too.”

As readers of this blog know, I am trying to slow down. I am trying to live in the margins a little more and not so much in the print. For years, lunch was the time in the day when I watched a DVD or listened to an audio book, under the theory that I should not waste time and that lunch was a great opportunity to fill my mind with some external source; to feed my intellect as I was feeding my body. When Elle was a baby, I ignorantly propped her up in an exersaucer with a handful of puffios while I sat next to her on the floor in front of the TV. Together we watched a ton of left-of-center documentaries like The Corporation, Born into Brothels, Wal-Mart: The High Cost of Low Price and the like. It wasn’t until I was watching a biography of George McGovern and some footage came on of atrocities during the Vietnam war and I instinctively covered her nine-month-old eyes with my hand that I put an end to this practice. But even recently, I have plopped her in front of an Elmo DVD or SuperWhy while I read articles from the New York Times as I chomped on my carrots and edamame.

We had one of those weekends that usually takes me three or four days to recover from. Friday Tom and I drove out to Boston with the kids and rode our bikes along the Charles, all the way to the Public Garden where Elle got to ride on the back of Mrs. Mallard. We had dinner at a great restaurant in Cambridge called Full Moon where kids have a playspace and grownups have a real menu. We spent the night with Tom’s mother, and then on Saturday I had to be at a rehearsal for Revels SummersDay at 10am, back for call at 2:30pm and then over to Passim for our 8pm show. Katryna and I drove home, arriving at my house at 12:30. In between, and at evening’s end, all sorts of breastfeeding logistics had to be co-ordinated. I woke up on Sunday, Father’s Day, with a horrible case of the Shoulds. I should not be in such a bad mood, for starters. Also, I should not have booked so much to do this weekend (including a three-hour shoot for extra footage for the DVD we are making, scheduled for Sunday afternoon.) I should have planned on making Tom something special for breakfast. I should take care of the kids all day since Tom should get the day off, and I hadn’t spent enough time with them Saturday. The tireder I got, the worse the Shoulds hounded me, like Hera’s gadflies in the myth of Io. They persisted even though Tom graciously insisted I rest and even though we had a fabulous time at the shoot (we went to Town Farm and filmed the ducks, hens, goats and our four kids who marched around in the mud carrying little parasols. 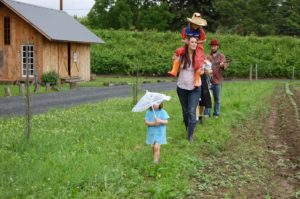 By the end of it, Elle had one red foot from stomping around in a big puddle which made her red Mary Jane’s dye run. She said, “Mama, I can have ruby slippers even when I’m barefoot!” 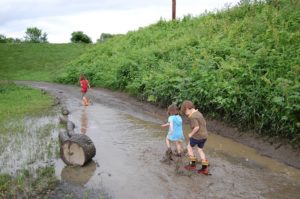 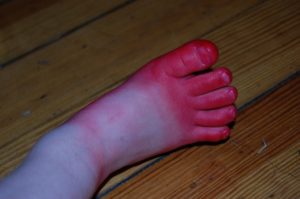 We came home triumphant with pizzas and Chinese take-out and celebrated all the dads. The kids played together in the yard with George Harrison, and I didn’t even feel all that tired for a few minutes. But after we put the kids down, the extreme fatigue returned and so did the Shoulds. I decided to write them down–that if I could witness them, they might not bite me as badly, or at least I’d be prepared. I wrote them down, tried to find my limiting beliefs which mostly had to do with my fear of being alone (“If I am too tired, I can’t be my charming self and people will leave me,” goes some of the logic. Another version of this is, “If I take good care of myself by setting limits, people will leave me because I won’t be taking good enough care of them.” Then I brought the feelings into my body and did some breathing, thanked the gadflies and released them.

That night, I had the most amazing dream. I dreamed this fan of ours had taken hostage all the participants in a workshop Katryna and I were running at a kind of day camp for grown-ups. I walked in late and missed the drama; I was carrying Jay in my arms. Katryna filled me in. I was not told, but assumed the fan had a gun; how else would she compel everyone to stay and be afraid of her? Somehow I got permission to leave the building and get something from my car in the parking lot. On my way, I said to every single person in the parking lot (and there were hundreds, “Hey, _______ is holding everyone hostage! Call the police!”

“Yeah, right,” everyone dismissed me. I found my car and put Jay down. He promptly disappeared, which in the world of my dream was a good thing: he was now safe. I got my cell phone and tried to call our manager, Patty, but the buttons wouldn’t work. Frustrated, I went back into the building and climbed the stairs to the Art room. I told the instructors there that our fan had taken everyone hostage, and they believed me. (Artists, you know.) They rolled their eyes. “Yeah, she’s crazy,” they agreed (about the fan) and picked up the phone to call the police. Relieved, I kept climbing the stairs to the roof where theoretically the fan was herding everyone in order to somehow kill us. I found her and took her hand, calling her by name. “______,” why are you so angry today?”

“Wellllll,” she said, sounding a lot like my three-year-old daughter. “The last time you came to _______ [her state] you didn’t stop by to visit us. You never pay any attention to me.”

I was about to protest, to sputter with indignation about my two children and the fact that her town was three hours away from the gig, but instead I said, “Yeah, that’s really disappointing. I wish I had more time to visit people. But, _______; you are going to feel pretty sad if you cause harm to these people.”

Then my Zen alarm clock woke me up.

A few minutes later (it was around 6:30am) the whole household was awake. I was changing Jay’s poopy diaper in his room and Elle was jumping up and down on the double bed.

“I have to pee!” she suddenly shrieked. A minute later, she was back, chagrined. “Sorry, Mama, but I tried to pee in the potty but I peed, I only could get to the bathroom floor, and I peed on my pants.” Which she handed to me, soaked. I was about to express my disappointment when I remembered that verse of the Tao.

“That’s okay, sweetie. You’re figuring it out, and I know eventually you’re going to always pee on the potty. But accidents happen. Just get a towel and clean it up.”

“Okay, Mama,” she ran off and returned with the damp towel. And I kid you not; the next thing she said was, “Mama. You listened to me today.”

Jung would say all the characters in the dream were me, or versions of me. So the fan was me, pretending to have a gun when all she had was a lot of rage and threats. Mad that she wasn’t getting enough attention. The participants in the parking lot who were dismissive of the threat were me, too, as was the uncooperative cell phone and even the disappeared Jay. And of course all the participants who were fooled by a mad person with only the threat of a gun.

Today I want to be a person who listens more than anything else. I want to be a witness to the hostage in me as well as the hostage-taker. And of course I can never know how the dream might have ended this morning before the alarm cut it short, but I can hope that the fan figured out on her own that she didn’t need to be feared or despised in order to get what she wanted, which was just to get some love and attention anyway. 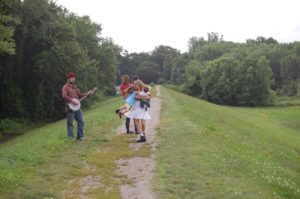 Top photo by Nerissa. All others by Kris McCue.

Falcon Ridge and the Return of Hope

Have you ever had just one good day, the kind of day when you might even be foolish enough to hope for a brighter future than the one from which…