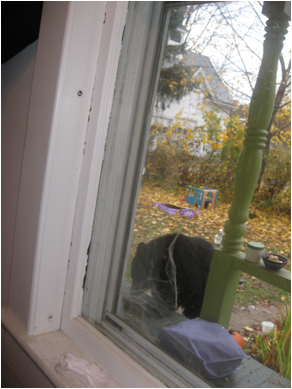 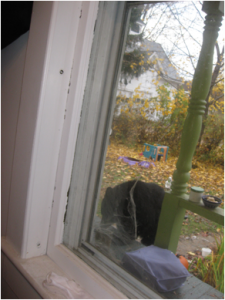 The Saturday after election day, Tom made a cake: an electoral college sheet cake. Tom is even less of a graphic artist than I am, yet he managed to draw the United States with only a few weirdnesses around the Appalachian region. The cake had white butter-cream frosting with the state abbreviations written in the color in which citizens voted; blue Minnesota, Red Kentucky, etc. Guests helped themselves to their favorite state, so by the end of the evening, the cake was a riddled mess. (Lila ate Alaska, but don’t be too alarmed—it was not drawn to scale.) Cleaning up, I cut a wedge out for Tom to eat later and threw the rest of the cake in the trash on our back porch.

The next day, our friends Melany and Sam came over for a playdate. We saw them drive into our driveway, and were then puzzled when the phone rang and the caller ID identified Melany.

“Um, you’d better look in your backyard,” Mel said. I peered out the kitchen window to see a big black bear lumbering around our picnic table. Lila, who’d recently been told that bears can’t come into houses because they have no hands and therefore can’t open doorknobs, came scampering up behind me.

“Oh, look!” I said, trying my best to sound jolly. “A bear! How fun! Let’s take pictures.” And I hung up on Mel and called 911. “Hi,” I said, again feigning casualness, my daughter on my hip and my son asleep in the neglecto-matic. “There’s a bear on my porch. Please come very soon.”

The bear, meanwhile had shuffled up the stairs to the porch, which is on the other side of the window we were looking out, and proceeded straight to the garbage can. He must have had an appetite for all those red states no one ate. A few minutes later, after we’d taken as many pictures as we could and I was beginning to worry that he’d make a liar out of me in front of my daughter (about the part where bears don’t come in houses), he turned from the garbage can, looked our way, waved his head around and made off down the stairs back into the backyard. I called Melany and told her to back her car up onto the street.

A policeman came and jingled his keys. The bear ambled farther back into our yard and proceeded to climb one of our trees, and we all decided it was a good time to go to the playground, via the front door.

That was the last we saw of the bear. But every night we tell stories about him, and when I get out of my car, I look around carefully before pulling my two kids out.

Johnny got his first cold right after Thanksgiving: that makes one dysfunctional family bingo prediction come true. He also rolled over for the first time, is grabbing at things, including our hair, and has developed the manliest hearty laugh. He still sleeps in our bed, and when I discovered by reading my old journal that Lila was out of our bed by now, I called my friendly neighborhood child psychiatrist to see if I was in the process of ruining my son’s life, or at the least encouraging his future Oedipal complex.

“No,” said the psychiatrist. “Boys’ nervous systems are more fragile than girls’––they only have the one X chromosome, you know, and the Y doesn’t have much of anything on it. Besides, as a second child he probably gets held much less frequently than Lila did. Keep him in bed till kindergarten.”

“But I’m terrible at playing with my daughter,” I said, switching gears. How often does one get to talk to a child psychiatrist?

“I mean she asks me to play dolls with her, and as soon as I sit down on the floor in front of her doll house, I think of a million other things I should do instead. Like clean the bathtub or wash dirty diapers. And what’s really weird is I was the kind of kid who loved to play with dolls. I could play for hours and hours, making up stories, getting totally lost in the fantasy. In fact, I had to force myself to stop playing with dolls when I was 12 or 13, and even then, I’d sneak into my little sisters’ rooms and play with them, like a junkie getting one last hit. But now, it’s the last thing I want to do. I’d rather organize her books than play with her dolls.”

The psychiatrist was silent, and I began to lose hope that he would say what Tom had said: that I was an artist and I’d brought my make-believe into my writing life. Instead he said, “That sounds like a block. Work on it. Make it your meditation. Set a timer for 15 minutes and play with her for that long.”

So I have been. And the funny thing is, as soon as I think of it as meditation, I don’t mind doing it at all, probably because the alternative is sitting still and doing nothing, which is harder than aviation engineering if you ask me. And wouldn’t you know it? I do remember how to play again. I find myself thinking of new shenanigans for Lila’s dolls to get into while I’m taking a shower or going for a jog. (Her dolls’ names are Nimi, Chimi, Tofu and William. William is a girl with long brown hair.) But even better, I remember that it’s not all up to me—I get to just wait and respond to what Lila makes the dolls do. Ah, yes—that’s probably what I liked most about imaginative play to being with –the way it connected me to the other kids I was playing with.

But I started by talking about Johnny. Yesterday my sister Katryna called to tell me she and her whole family had been exposed to Whooping Cough. In case you don’t know, WC is a horrible disease that kills babies under the age of 6 months. Johnny’s had one immunization, but he won’t have the other for another few weeks. Katryna, who takes illness very seriously and her own responsibility for the happiness and well-being of others even more seriously, called in tears to tell me, and said, “I won’t be able to live with myself if I’ve given this to Johnny.”

Of course, he wasn’t fine; he had a cold. I took him to bed and asked Tom to look up Whooping Cough symptoms online.

“You won’t like it,” Tom said after a minute of staring at the screen. “’Often starts as a cold with only occasional coughing.’”

As if on cue, Johnny started to cough. Then he vomited.

“And it says they vomit,” Tom went on.

I curled my body around my baby and put my hand on his head. He was trying to nurse, but his congestion was so bad he had to keep pausing just to catch his breath. All night long, I kept waking to his labored breathing, which alternated between baby gasps and sighs, and old-man-like snoring. Late in the night, he settled down and we both slept. But not before I’d prayed with everything I had for his good health.

I don’t believe in the kind of praying that results in infants being saved from grave illnesses, but I do believe that for some of us, that kind of praying is all we may be capable of when we are deep in a state of fear as I was last night. I also believe that the kind of prayer that does work—almost perfectly in my experience—is the prayer that we love more, love better, feel more gratitude, forgive and change our stuck ways of thinking. So I prayed for all that too.

In the morning, I called the doctor who told me to watch his temperature (which was not elevated) and breastfeed him a lot. Later in the day, Katryna called to say the person she thought she was exposed to turned out not to have pertussis. And Johnny seemed to have just a bad cold. Once again, the bear passed us by. I am beyond grateful. All this happened around the fifth anniversary of the day Tom and I met for the first time at the Starbucks in Northampton. I asked him that day if he wanted to have kids. He said he wasn’t sure. Did I?

Now that I’m here, looking back, this response strikes me as slightly off. People who are trying to decide whether or not to have kids don’t get it. They think it’s a lifestyle choice between, say, living in the city versus living in the country, whereas it’s really a choice between living in an imperfect, volatile and uncontrollable world versus having a bear take up residence in your backyard. This is what they mean about the highs getting higher and the lows getting lower. I want to scream from the rafters about the importance of immunization and throwing one’s trash away indoors and out the reach of deadly wildlife. But instead, I’m going to get on the floor and play with Lila’s dolls. Nimi and Chimi and Tofu are planning a trip to California, and I want to lead them via Yellowstone Park.

Why You Should Think About Your Fans Instead of Your Critics

Tom and I moved quickly. I was 36; he was 41, and we wanted to have a family. Both of us had been undecided on this issue until we met…