Post-Diluvian and My Own Weird Climate Change 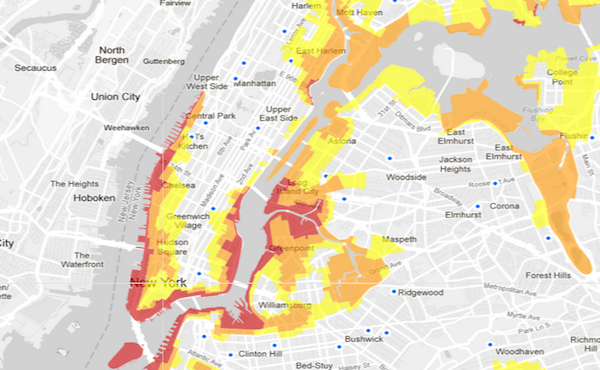 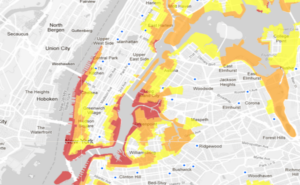 I can’t shake the images of the water flushing through the Subway entrances and exits, the cars floating in the parking garages of lower Manhattan. The eeriest thing about these pictures is that I’ve seen them before—in my mind’s eye after watching Al Gore’s An Inconvenient Truth, six and a half years ago. I left the movie theatre on that scorching June day resolved to do whatever it would take to be a climate change activist, or at least an awake aware person doing her tiny little cloth-diapering, biodiesel-driving part. “Well, now we know,” I said to Tom. “Knowledge is power. Certainly after learning what this movie taught us, we’ll begin, as a country, as a unified world, to change our fossil-fuel burning ways.” I’d had a similar optimistic thought in 1981 when I was 14 and I first learned about nuclear war. Now that we have this power, I reasoned, we’d never use it. We’d know better. War, surely, was obsolete now.

Al Gore and his ilk were predicting the kinds of floods we saw earlier this week to occur in about fifteen to twenty years, if memory serves. When climate change aficionados spoke of receding coast lines, as a former New Yorker I thought first of my sister’s in-laws on West 4th street and Red Hook and wondered if it was wise for them to continue to live where they lived. Maybe in ten years they should think about selling, I thought. Property values won’t diminish much between now and then. I imagined the waters rising up over the Henry Hudson, taking the joggers and the cyclists along with them.

Earlier this year, in July, I experienced my own weird climate change. For the first time in 16 years, I got my period. Without getting too personal and TMI, I’ll just say that the stress of my years on the road in my twenties had taken a pretty significant toll, and one doctor on my case back in the 90s had commented, “Evolution takes pretty good care of these things. You wouldn’t want the matriarch of a starving tribe to be pregnant with twins.”

My bandmates thought that was uncannily apt.

I did everything I could to restore my cycles, trying acupuncture, diet, yoga, alternative healers, psychics and finally western medicine. With the help of a talented endocrinologist, not to mention a patient and loving husband, I was able to conceive and deliver two gorgeous healthy babies. And then a few months after the last one weaned, to my great surprise I discovered I was menstruating.

At the age of 45, chances of my getting pregnant are slim, but not impossible. Every month when I feel that twinge in my side, I start doing the math: if I conceived now, would it interfere with Falcon Ridge? If we had three kids would we have to ditch our extremely fuel efficient Jetta wagon for a minivan? Could we pay three violin tuitions per year? (The answers: yes, yes and no). More importantly, how would a younger sibling impact the two I already have and cherish and want to give the world to? I know the answer: I asked them. “Nah,” is what they each said. No baby brother or sister, thanks. They are smart enough to know that the emotional resources around here are scarce.

I say that with no self-deprecation, which is new for me. I’ve spent the past 6 years feeling guilty about the quality of my mothering: that I am too distracted by my career, too spiritual, too ADD, not willing enough to get down and play with them on the floor, not silly enough, not strict enough, not crafty enough, not soft and flabby enough. I knew about the mom wars, and I thought I was too smart to fall victim to them. I was wrong.

But I got my feminist on recently; probably sometime around Mitt Romney’s reference to his binders full of women. I got reminded by some kick-ass mom friends of mine that motherhood is the hardest goddamned job on the planet, and one that rarely wins its practitioners the Nobel or a Grammy (no pun intended). When a girl was raised to be everything she could be career-wise; when she has a deep abiding love of something other than family (art, God, humanity, the Beatles) and then tries to excel at Motherhood as if it were just another arena, she is doomed. Not that I know this personally.

I’ve gone back to the Winnecott mantra: don’t even try to be a good mother; just be a good enough mother. Just good enough. See this as a long marathon, not a sprint. Your reviews after one evening’s meal and violin practice might be scorching one day, but you’re in this for the long haul. Get the food into the kids. Get their practice in. Read them a book. Cuddle them until they fall asleep. Rinse, repeat. When Elle was an infant and I was on hallucinogens (metaphorically speaking),a friend of ours–father of 2 teenagers–said that he experienced parenthood as being like working in a button factory. “It’s mind numbingly boring,” he drawled. I could not begin to relate then, but now it’s a relief to know that some others feel this way too.

Oddly, as I began to accept myself as wholly imperfect and frustrated, something shifted. I stopped feeling so frustrated. It might have helped that they’ve moved on from 24-piece jigsaw puzzles to those new Lego trucks and campers which I find so thoroughly absorbing that I am tempted to work on them on my own when the kids are at school. So I actually am on the rug with them more these days. (Elle recently said, “Mama! Go away! They are my Legos! Stop playing with them!”) It’s also helped immeasurably that I know this is the last year I have a preschooler, and I am in that sweet spot of treasuring each day I have with him. (Which doesn’t preclude me from sitting him in front of Thomas the Tank Engine so I can get my writing done, as I did today. Also, did you know that Ringo narrates Thomas’s earliest episodes?)

Here’s the thing. Even though every part of my rational mind knows that I should not have another child, and for most of the month I really don’t want another child, for those two or three days when I am ovulating, all I want to do is procreate. And no, I am not endorsing this insane article suggesting that women while ovulating were more likely to vote for Obama. I am just saying that even I, a well-educated mostly sensible person who has deep roots in addiction recovery, have a hard time not just going for what I want when I want it. If someone with my level of dedication to restraint (not to mention fear of what others will think of me) could lapse and find herself with child, what hope is there that billions of people will voluntarily band together and agree to drive a lot less, consume a lot less, procreate a lot less?

A child is supposed to grow up. I am supposed to feel the gap, feel the grief of separation. It’s part of life. Losing Manhattan—not so much. So this new ache in my heart, this helpless helpless feeling, I can’t get my mind around. I am left, yearning for connection with others who are willing to seek answers, policies, leaders who can speak the truth about what’s happening and give us orders. We can’t dig ourselves out of climate change perfectly, and we probably can’t even slow it down, even if we were a united front. I am left with these words from Job:
38 Then the LORD answered Job out of the whirlwind, and said:
2 “Who is this who darkens counsel
By words without knowledge?
3 Now prepare yourself like a man;
I will question you, and you shall answer Me.
4 “Where were you when I laid the foundations of the earth?
Tell Me, if you have understanding.
5 Who determined its measurements?
Surely you know!
Or who stretched the line upon it?
6 To what were its foundations fastened?
Or who laid its cornerstone,
7 When the morning stars sang together,
And all the sons of God shouted for joy?
8 “Or who shut in the sea with doors,
When it burst forth and issued from the womb;
9 When I made the clouds its garment,
And thick darkness its swaddling band;
10 When I fixed My limit for it,
And set bars and doors;
11 When I said,
‘This far you may come, but no farther,
And here your proud waves must stop!’
12 “Have you commanded the morning since your days began,
And caused the dawn to know its place,
13 That it might take hold of the ends of the earth,
And the wicked be shaken out of it?
14 It takes on form like clay under a seal,
And stands out like a garment.
15 From the wicked their light is withheld,
And the upraised arm is broken.

42 Then Job replied to the LORD:
2 “I know that you can do all things;
no purpose of yours can be thwarted.
3 You asked, ‘Who is this that obscures my plans without knowledge?’
Surely I spoke of things I did not understand,
things too wonderful for me to know.
4 “You said, ‘Listen now, and I will speak;
I will question you,
and you shall answer me.’
5 My ears had heard of you
but now my eyes have seen you.
6 Therefore I despise myself
and repent in dust and ashes.”

There’s a muscle in my back Left trapezoid, north of the rhomboid That never relaxes. It’s the muscle that can’t stop grabbing for the guitar. “There, there, there!” I show…