The Bear, Part One 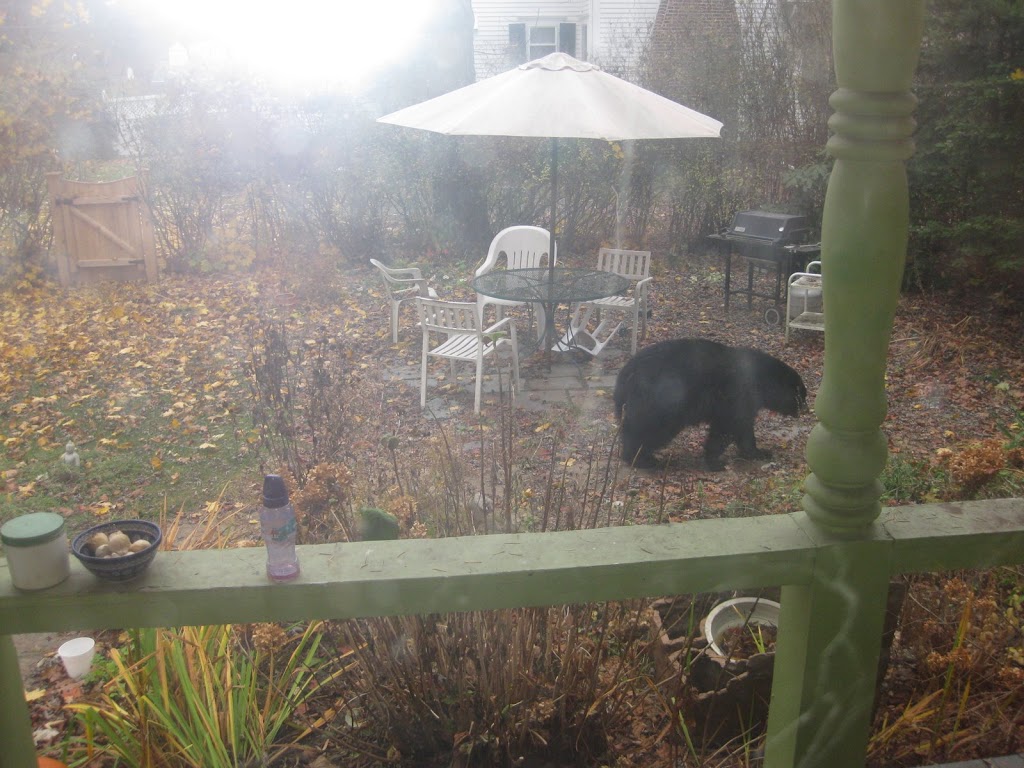 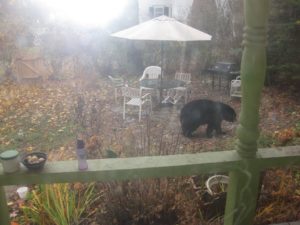 In late October, Tom and I had a $26 date. I packed up my dinner and met him at the Haymarket, our local coffeehouse/ vegetarian eatery where Wi-Fi is free and the local writers hold office hours. The $20 was for the babysitter; $6 was for Tom’s egg sandwich. On the way home, driving past Smith college, I saw what looked like a giant Newfoundland dog bounding in front of the art museum.

“A bear!” I shouted, pointing. The bear ran across Main Street right in front of our car, Tom jumped out with his cell phone and called the cops, following it a pace. I called out to the Smith students, “There’s a Bear on Bedford Terrace,” and they responded with appropriate enthusiasm.

When we got home, of course we told Lila right away. That might have been a mistake.

“No, sweetie,” I said. “Bears don’t come inside houses.” Then I remembered too late that our most recent favorite book—the one we read three times per night—was Goldilocks. “Real bears don’t come in houses,” I amended. “They can’t. They don’t have hands, so they can’t open doorknobs.”

This didn’t seem to relieve her much, so Tom quickly added, “And they like woods. We don’t have enough woods here for the bears.”

Three days later, our family of four traveled to Brattleboro VT where Katryna and I participated in a No Nukes Jubilee. It was a dismal day, not quite raining, but definitely threatening to, and the crowd was not huge. The first thing we saw, (having hoped for face paint and a bouncy house and maybe some farm animals to pat), was a clown dumping a barrel of autumn leaves on a group of children. Lila promptly screamed and jumped into Tom’s arms. “Who’s dat guy wif lipstick?” she shrieked.
And now it’s, “Clown’s can’t come into our house, wight Mama, because dey don’t have hands.”

It’s a time of fear and loathing—after all, it’s almost Halloween, not to mention election day. We Democrats are so scared we can hardly look each other in the eye these days. The polls look fabulous, with our guy above 50% and campaigning vigorously in states that haven’t voted for a Democrat since before the platypus became extinct. People are talking landslide. People are talking mandate. People are talking about a filibuster-proof Senate. People are talking about major parties on November 5. And I continue to be glued to my laptop where I can read the latest article about Why McCain Fell Short and The Palin Effect and Who’s Going to Be in Obama’s Cabinet instead of doing a million other things that would be, as my friend says, more nurturing.
Like: meditate, exercise, write in my journal, play with my kids, write a song, or best of all, do nothing. As a life coach, I often prescribe just this for clients. Take five minutes of nothing and call me in the morning. Today, I raced upstairs to get dressed for my weekly morning self-care date (therapy plus Pilates=saner and fitter mama) and as I passed my unmade bed, I lept onto it, rolled on my back and lay there for the count of thirty. Then I jumped back up, put in my contacts, washed my face and brushed my teeth. Tonight, after dinner and before my writing group, I found a CD from my college days—the fifteen century Franco-Flemish composer Josquin des Prez––and let the complex melody with the simple one voice arrangement act as a tonic to my nervous system. I recently learned that the young child (or baby) uses his parent’s nervous system to regulate his own. He literally relies on the parent to calm him down, and as anyone who ever played those outdoor adventure/inner quest activities knows, one must be well grounded in order to ground others. Thus, the Gregorian chant.
That extra hour we got when we “Falled back” was lost on us—it just fell into the big sleep deficit.

So this last week went a little differently from the previous weeks. I tried to put the oxygen mask on my own face before putting it on my kids, to use my all time favorite metaphor. I made sure I got to the gym, scribbled some musings in my journal every day, and went out for dinner with my husband and another wonderful couple while our kids got to eat Halloween candy and misbehave with a babysitter. And it worked, and I did feel better: not quite as convinced that if I didn’t take in every single last moment with my two growing children that I would lie on my deathbed regretting all my choices.

People didn’t used to parent the way we parent today. My parents left us in our bassinets by the side of the tennis court, and we turned out just fine, mostly. Some nights when I wake up in a pool of vomit (or worse) and my neck is bent at a radically unnatural angle as my body curves around my sleeping boy, I wonder why I let fear of SIDS keep me from using that lovely crib in what used to be my office down the hall. But then, just a frequently, I take in the unparalleled sweetness of my sleeping son, cuddled in the crook of my arm like the ultimate teddy bear and know these days are numbered: he’ll be in his own bed soon enough. I got an email from a friend whose boy is now 13. “I sat through the entire season of American Idol last year,” she confessed. “Just so I could cuddle with him on the couch under a blanket.” I totally get this.

I was reminded recently of one of the benefits of our way of parenting in a recent New Yorker: apparently the teen pregnancy rates (and even abstinence rates) are lower in so-called Blue states, and many sociologists attribute this to attachment parenting. Of course, all those sociologists probably are or were attachment parenting devotees, so the report may be suspect. Are we going overboard in our slavish devotion to our children? Where is that elusive balance? Given that my resources are so taxed, can I settle for a life where it seems the pendulum keeps swinging from one extreme (focus on kids) to the other (focus on self)? Or, to put it another way, can I let go of all my judgments, not to mention the judgments of others and just live my imperfect life imperfectly but with great joy?

As I have written previously, I made a vow last December to make peace with money. I decided to let the ways in which I interact with the currency of…