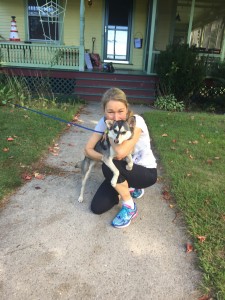 My seven year old has lost exactly half of his four front teeth–just the ones, curiously, on the right side of his face. He is the kind of kid who hangs on to teeth, while his sister takes pains to pull out the wiggler. Johnny won’t eat an apple for fear of knocking this tiny little baby tooth off its shaky foothold in the gum.

Speaking of teeth, Stella, our little husky mix Dixie dog, bit him a few weeks ago, right when we got back from the Adirondacks. As usual, she didn’t clamp down, but she nicked him with her tooth, right near his eye, as she had done before to many people. Johnny howled and cried, and I came rushing over from the sink and threw my arms around him and cried too, and I said, “We can’t keep her anymore.” Lila, who was sitting on the rug, cried as well, and she nodded. And suddenly, it was clear. After a year of thinking we could live with Stella’s erratic mouthing, we knew we needed to find our sweet little dog a new home. After a long search for a permanent family for Stella, someone connected us to a young woman who is a dog trainer and works at PetCo. She lives in the neighborhood, has a big fenced in yard, her parents have acres and fences and dogs galore, and we just handed over the leash, so to speak. We watched the young couple load her into their shiny new truck and watched them take her away. We all clung to each other and sobbed.

These thin spots, these places where I feel that closeness to danger are strange portals into a future world. I was surprised at how easily both my kids accepted the decision to let Stella go, as if they suddenly had the gravitas of adulthood. We had spoken to several trainers who were clear with that it would not be possible to train away Stella’s behavior, her tendency to nip on the face, especially around the eye. When I called Dakin Animal Shelter to see if they would take her back, they told me they would only do so to euthanize her. My kids were with me when I had this conversation, and they watched my face crumple up and heard my voice choke as I spoke with the woman. I think in seeing how broken up I was about losing Stella, about my fear that she would have no future, they both grew up a little. They saw me less as the authority figure and more like a family member who loved the same dog they loved. Anyway, the two of them circled me, leaned in and held me as I cried. And then I did the same for them. We are going to miss Stella. I hope someday we have a new dog, a dog my kids aren’t afraid will bite their friends. But there will never be another Stella.

In one of my writing groups, one of my longtime writers read a piece that brought to mind a song I wrote in 1995, a song called “Gotta Get Over Greta”; a song about the painful, private heartbreak that marbles so many female friendships, starting in kindergarten, and continuing in various guises through into adulthood, if my own experiences are any indication. My friend wrote about an intimate friendship with a woman that inexplicably went dead, and the subsequent confusion, questioning, hurt feelings that go with such a loss. It got me to thinking. My Greta was a friendship forged in the fourth grade–the age my daughter is now. Greta was a revelation to me; I had never had a friend before who was so clearly a soul mate. She introduced me to so many aspects of myself–from music to fashion to politics to the Greek goddesses; and because she was my first real best friend–my first love, in a sense–when she suddenly dumped me for another best friend, the pain was even worse than subsequent heartbreaks, almost as bad as my divorce. In a way it was worse than my divorce, because at least then (as with any broken romantic relationship) friends and family swoop in to console. In the case of a lost best friend, or even the loss of a close female friend, the heartbroken one often has a hard time articulating to others what has happened. There are no support groups for those who are grief-stricken when a friendships ends, or changes. There is no couples counseling for these things. People don’t nod sympathetically in the grocery store when you respond to “How are you?” with, “Well, I’m going through a friend break-up.” (And who would even admit to that, anyway?)

In my case, at the tender age of eleven, I was filled with shame at being passed over for another. I was quite alone with my heartbreak. Who could I tell? No one. So I sat in the bathtub and sang “Hopelessly Devoted To You” from the movie Grease. When my parents suggested I invite Greta over, what could I say? The truth–that she was busy with her new best friend, Raquel–was too painful, and so I withdrew to my room, read A Tree Grows in Brooklyn for the fourteenth time, and kept my shameful secret to myself –that I was not good enough, lovable enough, interesting enough, cool enough –that I had lost Eden.

I don’t want to pin this on my sex, but I don’t see these same kinds of fraught emotional relationships among men. My husband has many dear close male friends, and he maintains them all. But men don’t seem to lean in to each other in the same way women do. After Greta, I was very careful about giving my heart so completely to another female. I got close; I revealed the way girls do to build intimacy. I talked for hours on the phone with my girlfriends. And I watched as the friendships waxed and waned, and I never really questioned why they never lasted more than five years. Women get in deep with each other. I am no exception. But once I get in deep, it is hard to get out. Once I see something in my friend that I disapprove of, I get afraid to confront it, so instead of getting into a conflict, I keep my mouth shut and try to reset the friendship button to an earlier time, the easy time, before the judgments and disapprovals created weight, too heavy to carry. In many of my friendships today, I set the ground rules to prevent (or at least attempt to prevent) this kind of wear and tear. I am quick to text, “No problem” when they break lunch dates with me. I am guilty of the same. I adhere to the usual hierarchy: children first, partner second, aging parents third, pets fourth, work obligations fifth and female friendships sixth or seventh–after the workout, of course. I have been very clear with my female friends about my own hierarchy. My husband and kids come first. Then family, then work, then my obligations to our community. I rarely have coffee with friends. I almost never go out to dinner with another woman. I wish I did. I wish it were different. I yearn for a sisterhood.

But maybe I am wrong, and boys/men do have this same issue with intimacy; it might just come out another way. Because maybe intimacy is intimacy, and just as we don’t want to get bit in the eye by our lovable but erratic dog, we all shy away from whatever that thing is that is too painful to live with in the Other and choose to move away rather than to move towards. I have a great life with very few regrets. One of them, though, is that I don’t have richer, better relationships with women.

On the other hand, it’s not true that I never again opened my heart to a woman. Of course I did. I have built a long, trusting relationship with the person I most feared and hated back when I was eleven—my sister Katryna! It is with her that I have done the icky, unromantic, clumsy work of relationship building, of screwing up and apologizing, over and over again. And through that work, I have learned how to be a friend to others. Having a family takes a huge amount of time and love, and while love is an abstract idea—yes, I love everyone, I love the world, blah blah blah—in practical terms, love takes time. Some would say, love IS spending time. It’s spending focus and energy. And while a person has infinite stores of love, she only has so much time and focus and energy. I have chosen to give mine to my kids and partner first and foremost. Maybe that’s why it didn’t work out with Stella. I wanted a dog who was easy, which was why we didn’t get a puppy. I wanted to leapfrog over that first puppy year, leapfrog over the house training, the chewed furniture, the sweet heartbreaking puppy-crying-in-the-night for its mama. Stella was three when we adopted her. But those years we leapfrogged over carried a mystery that can’t be ours to solve: what is the trigger that makes Stella snap? What causes her to be so afraid that she lashes out at a person’s face, their very eye? In the weeks and months leading up to our giving her away, I berated myself. We should have hired a trainer. We should have done the clicking thing with those clickers CMoore gave us. I should have spent more time with her.

But my time was taken. It was taken by my kids, my beloved partner, my work, our house, music, our community–and yes, my friends, those sweet snatches we steal to catch up with each other even if just via voicemail or Facebook or text. My heart was broken in ways that were permanent back when I was eleven. Stella’s ticks and triggers were set sometime in those three years when she wandered around Texas before boarding a truck that brought her up to Massachusetts, where we found her in the shelter. My son’s little tooth is going to fall out—probably this weekend—and will be replaced by the tooth that was always meant to be there, and who knows what that tooth will look like? If it’s a bit crooked, we’ll do some orthodontic magic to get it straight. We’ll make it work. And we will accept the straight and crooked paths our lives take. And bid our dog adieu.

Thanks to my last post, we found our puppy, 6 weeks ahead of schedule. Friends saw what I’d written and suggested I contact a breeder of something called Australian Labradoodles,…