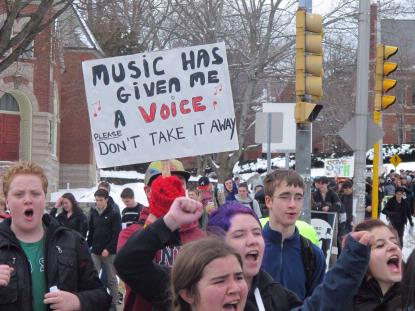 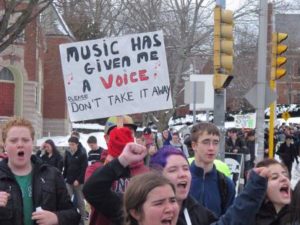 As I posted earlier, we’re facing a huge budget deficit in the school system here in Northampton (endemic in Massachusetts because of a combination of Prop 2 1/2 and some crazy formula they made 30 years ago). The proposed cuts are heartbreaking: $1.2 million all together, including bussing, many classroom teachers including our dear almost-family member Ms. Mc, many teachers in the high school and middle school, and of course, arts and music teachers at the middle school and high school. Katryna and I want to fight it. Of all the issues near and dear to our hearts, this is number one. We are who we are as artists, musicians and people because of the music teachers we had in our own school systems.

Tuesday I attended a meeting at the middle school (JFK in Florence). They were expecting 30 people on a snowy night after a snow day. Instead they got over 175. Peter Kocut, our state rep, laid out clearly for all of us the need to increase our state taxes. (No hard sell with me. I think it’s ridiculous how little we pay and how much we get, but that’s another story. And I do know that not everyone can afford higher taxes. But a lot of people can, and I am all for a progressive tax code. If everyone in Northampton paid $320, we’d cover the budget deficit.)

Peter Kocut spoke at great length about how we got here, why we have the deficit, how he is working hard to get legislative change, but it’ll be two years if he’s successful before we have the money to restore the cuts. And if we don’t take action now, there will be more cuts.

A 13-year-old girl stood up and said, “I hear what you’re saying. But the thing is, I want to know how to save our band teacher’s job. She’s the best teacher we’ve ever had. And I want my little brother to get to have her when he’s at JFK middle school. What can we do? How can we help?”

Right. Blah blah blah. How do we get our teachers to stay?

If anyone with a heart could see these kids imploring us adults to let them keep their band teacher, they’d find it impossible to refuse them. I’d personally give all my savings to keep our teachers at Jackson Street whose jobs are on the cutting board. But it doesn’t work that way. If we do private fund raising, the taxpayers will think the problem is solved. And I don’t believe our public schools should be funded by private fundraising. What about schools in poorer communities that can’t fundraise as effectively?

It was strongly suggested at the meeting that an override would be necessary again.
A JFK teacher stood up. “In 2009 we were in a similar place. And we were in a recession. Everyone said the override couldn’t pass. We got 60% of the vote, and we saved our teachers from being cut. We can do it again.”

“And your job,” said our city councilwoman Pamela Schwartz to the 13-year-olds. “Is to spread the word. Tell your neighbors. Tell all the adults you see. Get out there and lobby!”

Who could I lobby? I thought as I sat there feeling helpless. Who cares the most about arts and music in the schools? Besides the students? HooteNanny moms and dads and grandparents! I whispered as much to my friend Liz. “We should do a benefit to raise awareness.” She pointed over to the middle schoolers. “Well, be sure to include those kids!”

So as soon as the meeting was adjourned, I made my way over to the group of middle schoolers. I explained who I was and how I had access to about 300 local moms and dads. “Let’s put on a show!” I said (basically). My friend Lucien, a high school freshman at NHS overheard. “I can get a group from the high school,” he offered. Our longtime publicist, Michaela O’Brien is a parent of two boys in the school system. She immediately offered to help, too.

So here’s the vision: Katryna and I do a benefit–proceeds go towards helping publicize the override. Also onstage with us are the JFK Jazz Band and groups TBD from Northampton High School. I’d also love to have the Jackson Street Faculty Ukulele group and maybe one other performance by JSS or another school. All the schools. Let’s celebrate our young musicians in this town that’s so well-known for music and arts.
We need:
-a location (NHS? First Churches? Helen Hills Hills? Center for the Arts?)
-a date (late April, early May–we’re having a hard time finding a date due to so many moving pieces)
-a sound system and someone to run it
-some volunteers to collect money, help set up and clean up
-the teachers of the school groups on board
-to reach out to the Gazette, RSI, FCR, other media

Will you help us? Do you want to join a discussion to make SOS-SOA happen? Please email me at Nerissand@gmail.com or respond to this blog with your contact information.

When Pete Seeger was blacklisted in the 50s, after being accused of being a communist by the House Committee on Un-American Activities (HUAC), the Weavers’ career dried up. Pop radio’s…