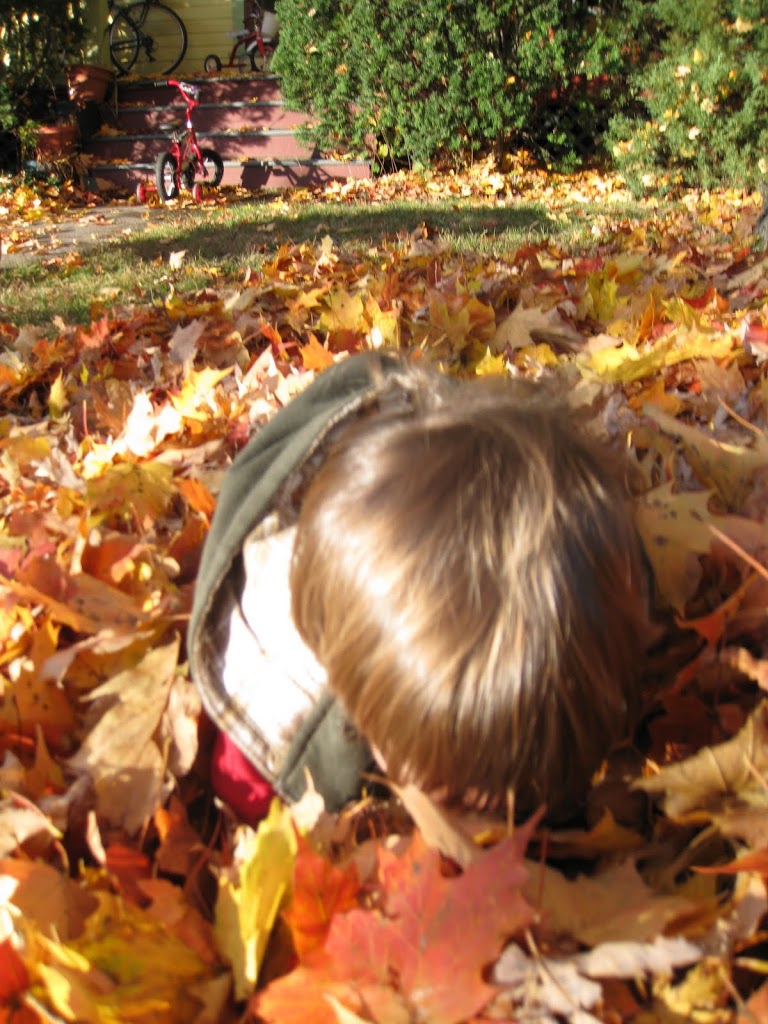 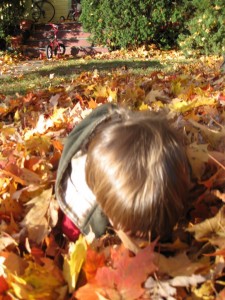 The prisoners of infinite choice
Have built their house
In a field below the wood
And are at peace.

It is autumn, and dead leaves
On their way to the river
Scratch like birds at the windows
Or tick on the road.

Somewhere there is an afterlife of dead leaves,
A stadium filled with infinite sighing.
Somewhere in the heaven
Of lost futures
The lives we might have lived
Have found their own fulfillment.
-Derek Mahon

I love this time of year. There is nothing more beautiful to my eyes than the light shining into my bedroom in mid-afternoon, filtered through the golden maples leaves to the west; the unflinching blue of the sky, the stateliness of the oaks, still holding on to their leaves when other trees are bare. I love the dying gardens, the shock of the asters and mums still blooming in my neighbor’s garden. Are you still here? I ask them as I pass on my morning run. Meanwhile, i am solidly in long johns and wool socks, refusing to leave the house without some ludicrous head covering.

But this year the dying of the light is getting to me, as is the general mood of anxiety about H1N1 and the recent plunging of the Dow. Last Friday, I scrambled to get to a hair appointment which I’d broken once already because I’d double booked myself. As I sat in front of the mirror, I noticed to my horror that my face had fallen.

Is this even an expression people still use? My mother told me, when she was my age and I was fifteen or so, that faces fall, “like this,” she said, pulling the skin on either side of her mouth down, creating jowls. “A face lift is when the doctor pulls it all back up and sews it behind your ears. You can see the wrinkles in old people behind their ears where the pulled-up skin would go.” She made noises about not ruling out a face lift now that she was “that age.” (For the record, she never did it, nor does she dye her hair which is still, in her mid-sixties, mostly dark brown. I have inherited my father’s hair.)

So there I was, forced to stare at my reflection for an hour and a half. Usually I like to do this. I have a practice that’s all about engaging myself in the mirror and telling myself kind things to make up for the abuse I hurled on my reflection as a nineteen year old. But something in the fallen jowls bummed me out, and that line from “Maggie Mae” went around and around in my head: “The morning sun when it’s in your face really shows your age.”

I really thought I’d be more evolved than this, so part of my angst was a disappointment in myself for being so vain. I wrote a song about plastic surgery in 1992, so now I can never have it, which is good, because I am terrified of knives. But somehow I thought I’d be immune to certain aspects of the aging process, like, oh, the whole wrinkles thing, the neck wattle, the sagging, the spread. Pretty much all of it, actually. Somehow last Friday, it felt like one of those storms that arrives this time of year and whips the last of the red and orange leaves off the trees in one fell swoop, changing the season from autumn to fall overnight.

A friend of mine recently pointed out that there are some people who are always going to focus on the first noble truth of Buddhism (“Life is suffering”) and some others who are going to focus on the third (“There is a way out of suffering.”) The greater part of my spiritual work is about deep acceptance. I am like the prisoners of infinite choice in the poem above, and I have been saved over and over by having limits forced upon me and then figuring out why that limit is the best thing that ever happened to me. But I also believe some of that Law of Attraction stuff about manifesting our desires. It certainly seems to happen to me on a pretty regular basis. (But not all the time.) I am after all a life coach, and the bulk of my work is to see ways in which suffering can be alleviated.

We had a show at the Iron Horse on Friday. These shows tend to be restorative. They are opportunities for us to take a good accounting of where we are artistically. We tend to debut new material at the Horse, and Friday was no exception. In fact, I had spent the previous week in a frenzy of songwriting, finishing two songs and writing two more besides. On Friday, before the fated hair appointment, I had missed my yoga class because George Harrison (our chocolate lab) had wandered out of our yard when sleep-deprived Tom had opened the gate instead of closing it. (I didn’t mention that last week, and this week too, our children have re-discovered that when they cry for us in the night, we respond. They are liking this a lot, and no one is sleeping much.) So Tom went looking for George while I brought Elle to school and was too late for yoga. Instead, I came back home and wrote an entire new song in about a half-hour.

We arrived at the club, my two kids in tow, our beloved Patty not there because she was recovering in New Jersey from having donated her kidney to her sister’s husband’s nephew. It felt so strange not to see her there; she’s an integral part of our Iron Horse experience, not to mention we were concerned for her recovery. Elle had dressed me in a shirt that fit me in the 90s. On Friday, its silky buttons kept opening at inopportune moments onstage. Our dear friend Jonas was filming the show. My dentist was in the audience, as was my minister and some of my best friends. Elle and Jay ran back and forth in the aisles, and as I sang and tried to keep my shirt closed, I kept track of their comings and goings.

The show was not sold out. I am not sure if this was the first time we had failed to sell out the club, but it certainly was the most noticeable. Capacity is 180, and our ticket sales were 140, so it wasn’t terrible, just not the usual manic energy one receives from a full house. I watched the stories swirl around about aging and diminishing numbers and concentrated instead on authenticity and the way my sister’s voice sounds when mine joins it; the fun of playing with Dave Chalfant and the magical elements he brings to our music. We debuted two new songs and I felt vital again, the way I only can when we are singing new stuff.

But part of me went to that place of being mad at myself for not working harder to envision a sold-out show, to manifest a Beatles-like career, to be a straight A student in the music world. Part of me is still struggling with acceptance about the numbers. Part of me still takes it personally, even though numbers are down at the Iron Horse, among all of my other musician friends and across the board in the music world, folk, pop, rock, hip hop, even country. Why would it be different for me?

A few things helped right off the bat. I remembered that whenever I feel this way, I’m about to hit my edge and see things differently. Nirvana is samsara, and samsara is nirvana. Sadness and grief always lead to epiphany and a new re-ordering. We grow. Also, I had to go to the dentist to have a filling replaced. By the time I came in, it was Tuesday and I had mostly digested the spiritual lessons of the weekend. I was grateful again: grateful that I have had exactly the life I have. Grateful for library books, for the color of my son’s hair, for the warm sunny days we had at the end of the weekend, for my yoga practice. On Monday I had gone to a different class (because my teacher was sick) and learned the term Anava Mala, which roughly translated means, “a limited, veiled view of the soul; a minimizing view.” When we are in this mode, we experience a false duality. We see ourselves as separate from God, and our ego blooms. I did my practice and reconnected with my body, wept for being so mean to my jowls and forgave myself for my vanity. So I was in a better place in the dentist’s chair than in the hairdresser’s.

My dentist and her assistant had photos up of all sorts of scenes in nature, including shots of lions and South American primates as well as their two dogs. I meditated on the photos as they drilled and vacuumed, and I began to worry about their livelihood. Does a dentist make enough money in this economy? My dentist is extremely reasonably priced, and I calculated her hourly rate and the number of employees she has, and became concerned. Then I thought about how much this might be costing me; I’d neglected to ask. Oh, well, I thought. Whatever it costs, I am glad to support these folks. I love them. And I did. I just felt waves of love fill me, even as my tooth was being drilled. Eventually they took the purple mouth dam out of my jaws and I was able to blurt out, “I just love you guys! You do such amazing work!”

“Well,” said my dentist. “I wanted to tell you the same thing. We were really moved by your show on Friday. And so we want to offer you–you and your family and Katryna’s family–a permanent discount on dental services. Because of the work you guys do for the community.”

Gifts come in all sorts of ways. As an audience member, I much prefer a moderately full room to a sold out show. The people who came to our show had a great time; no one other than we cared or noticed that every chair wasn’t filled.
And smiles raise jowls. That’s the best plastic surgery there is. I’ll take my two kids outdoors on a sunny autumn Sunday over the version of me who became a huge pop star any day. Anyway, that version is off somewhere in the afterlife of dead leaves. God bless her.